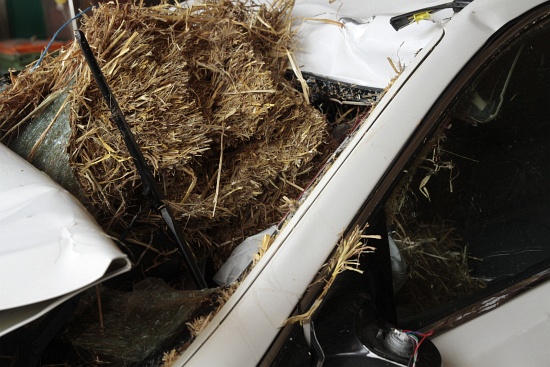 We shall get straight to the point. This photo gives cause for concern that this load-securing accident had serious consequences. And, sadly, the reality is that a person died as a result of the accident. We find it difficult to describe these pictures, not only because a person lost their life, but also because another person, maybe several, bear the responsibility for this death. And so we shall try to be entirely objective in analyzing these pictures and not jump to any conclusions. 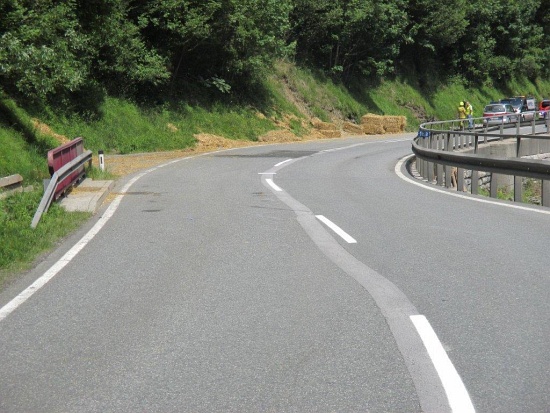 The accident happened at the bend in the road shown in Figure 2. This bend was preceded by a left-hand bend and a right-hand bend, that may have caused the load to begin swaying. 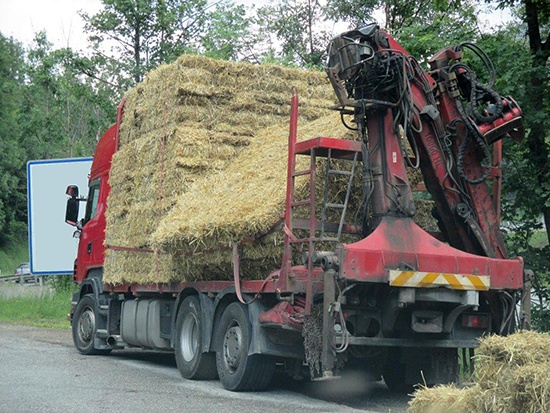 Figure 3 shows the vehicle from which the hay bales were lost. A sketch which we produced later on the basis of hearsay shows that the bales were loaded differently at the rear of the loading bed from the way in which they were loaded at the front. 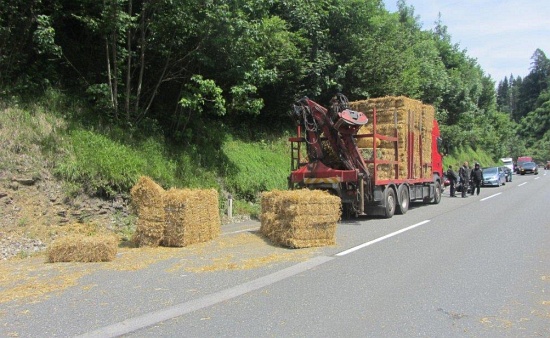 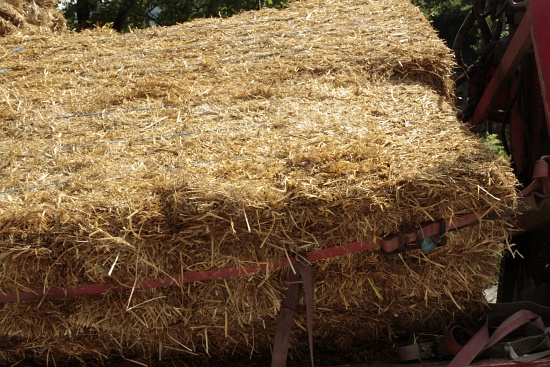 Figure 5 shows long, unbroken blue straps that have clearly been used to bundle smaller hay bales together to form "multipacks". These quite large multipacks form the load units that were loaded on this vehicle. The multipacks are 2.40 m x 1.20 m x 0.90 m in size and each weighed around 370 kg. 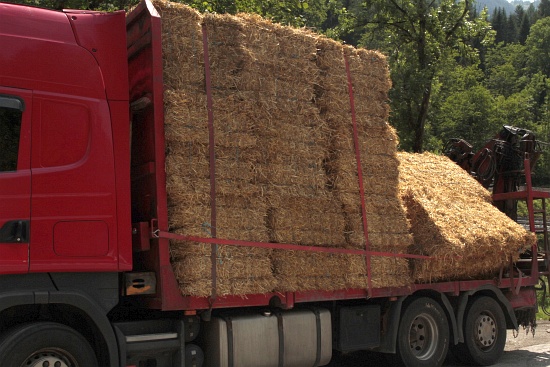 At the front, we can see two tie-down lashings and some kind of horizontal securing arrangement. We assume that this belt is intended to act as a sort of counterpart to the tight-fit securing on the right-hand side of the vehicle. Unfortunately, this belt serves no purpose in this respect, as it exerts no force on the load, and thus provides no securing force to the side.

Figures 5 and 6 clearly reveal two fundamental problems with loads such as this: Figure 5 shows the relatively untidy and soft edges and corners of the load, over which the belts were effectively passed. In Figure 6, we can see clearly how deeply the belt cuts into the load at the front. This gives an idea of how difficult it is to apply a suitable pre-tensioning force to this kind of load.

We wish to stress that we do not know and are not in a position to judge whether it was in this case possible to apply the necessary pressure to the load by means of an adequate pre-tensioning force. One solution that we would propose, and frequently do for relatively soft loads, is to use large edge protectors made from hollow plastic section that are as long and wide as possible. These combine several load units to form a single unit and distribute the pressure from the belts evenly across the load. This ensures that individual belts are unable to work into the load and thus maintains the pre-tensioning force for a significantly longer time. Of course, it is still necessary to re-tension the securing belts in an arrangement like this (as, indeed, any other load needs to be checked during a trip and the belts re-tensioned where necessary). 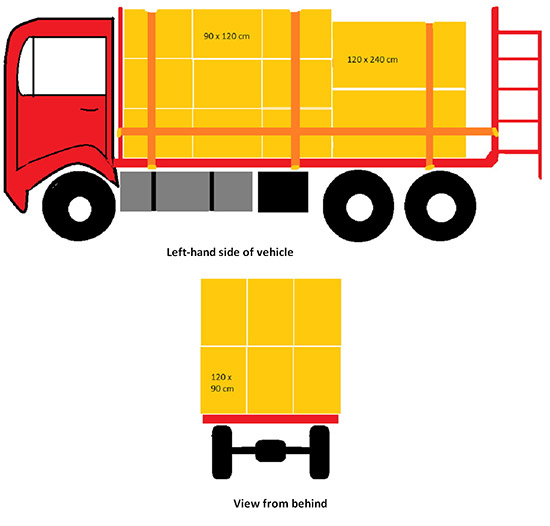 Any time a load is stacked, the risk of tipping increases. This applies to rolls of paper, crates, mesh crates and sadly also to hay bales. If they are stacked and loaded crosswise, they are liable to tip in a longitudinal direction and against the direction of travel. If they are loaded lengthwise and stacked, they are liable to tip sideways. This risk of tipping must be counteracted by the load securing arrangements.

The risk of the multipacks stacked at the front tipping longitudinally was counteracted on the one hand by the end wall and, on the other, by the multipack hay bales stacked longitudinally at the rear of the vehicle. We see this as a wise approach. Now, the "only" thing left was to neutralize the risk of the hay bales at the rear tipping by taking appropriate load securing measures. Because we do not know how much load securing material had actually been used here, we do not wish to, nor are we able to come to a judgment in this case. Instead, we can only look at the result, and this was an extremely unfortunate accident that led to the loss of a life.

How would we secure a load such as this?

One phenomenon that can often be observed is that loads that do not have a particularly high value are also not secured particularly well. This Photo of the Month shows that it makes no difference whatsoever how valuable a load is: Every load must be secured with the same diligence that it would be if it were made up of gold ingots or highly sensitive electronic equipment.

The risk of the load tipping to the front was counteracted by loading it as a tight fit. This securing method is simply the best one available to us. And as such, we would recommend the use of a vehicle fitted with sufficient stanchions, such as we can see on the right-hand side of this vehicle (at least in part). But because this is not always available, it is necessary to use tie-down lashings. We have already recommended wide edge protectors made from hollow plastic section for distributing the pressure. Ideally, we would like to see these edge protectors extend along the entire length of the loading bed. Of course, the load must be of a uniform height if this is to be done. Strong, wide edge protectors like these are well able to distribute the pressure across the load very evenly. Furthermore, it is possible to use belts to form crosswise loop lashings in the middle of the load, thus giving a good direct lashing (see Diagram 2). 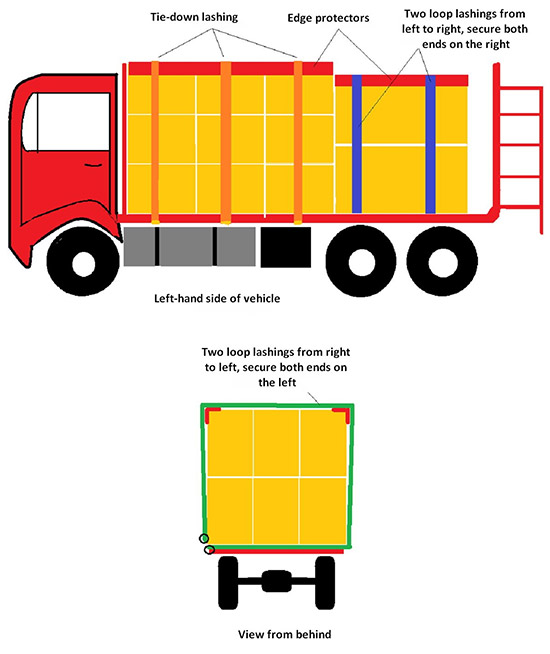 If, for instance, long multipacks are stacked, loop lashings are a very good way of securing them to the sides and eliminating the risk of tipping. To do this, it is necessary to lay out four belts on the loading surface before loading (two from right to left and two from left to right). When loading is complete, the belts are thrown over to the other side, where they are tensioned. These belts have two functions:

If the stanchions and metal slats on the right-hand side of the vehicle are able to provide an unbroken tight fit, it is, of course, sufficient to use two loop lashings to secure the load against movement to the left, provided that the lashings include all the multipack bales that have been loaded longitudinally. 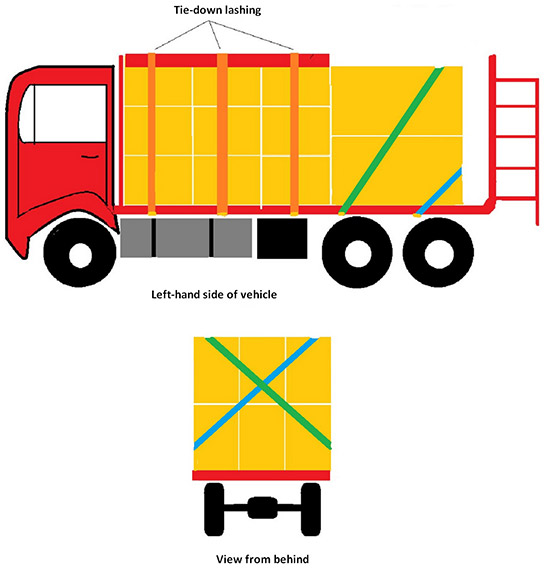 If a securing arrangement of this type does not incorporate all parts of the load, additional lashings must be used. One option, for instance, is to lay a "figure of eight" made from a lifting sling (round sling) over the top of the back of the load and to tension this to the front at both sides. To make a figure of eight from a lifting sling, it is twisted once and the two loops (eyes) that are formed are passed over the load to be secured (see Diagram 4): 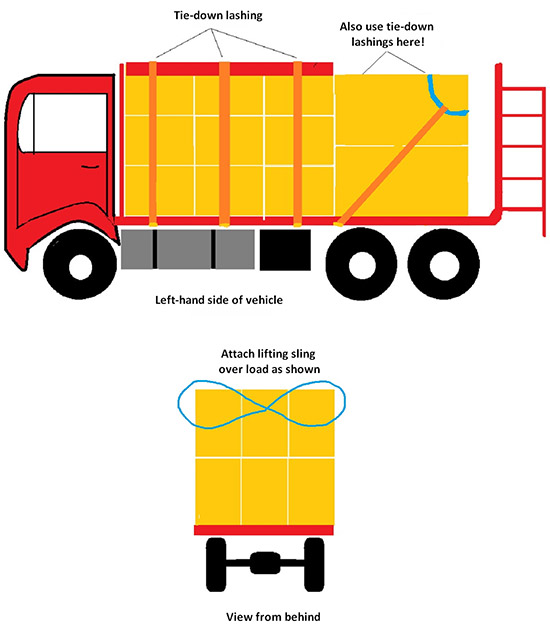