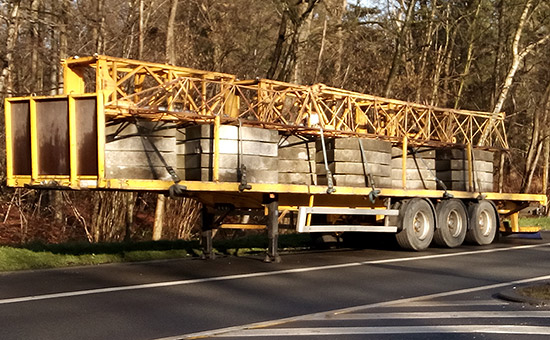 Cranes, or at least their component parts and the associated counterweights, are a commonplace sight on our roads. This is only to be expected, after all, cranes are needed on construction sites. And construction sites only have a limited lifespan. One telltale sign that a house is nearly complete is when the cranes are dismantled. And so it makes eminent sense for us to take the opportunity afforded by this splendid example to have a good look at the way in which crane components are transported. We can see a semitrailer with three stacks of concrete counterweights (whether they be base weights or counterbalance weights) and, loaded on top of these, lattice elements of a tower crane. This arrangement is commonplace and can be seen in our cities many times a day. 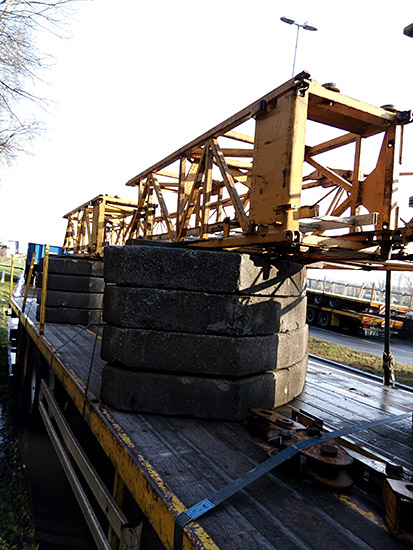 In this particular case, the "counterweights", as we have called them, were arranged in three stacks. They were stacked four-high and the lattice elements of the crane were carefully placed on top. Observant readers will not have failed to notice that wooden beams were also placed on top of the concrete weights to protect the lattice elements and prevent the paintwork of the crane components from suffering further damage. At some points, we can see that rectangular lumber has even been used as dunnage, which, we have to say, is a welcome sight. 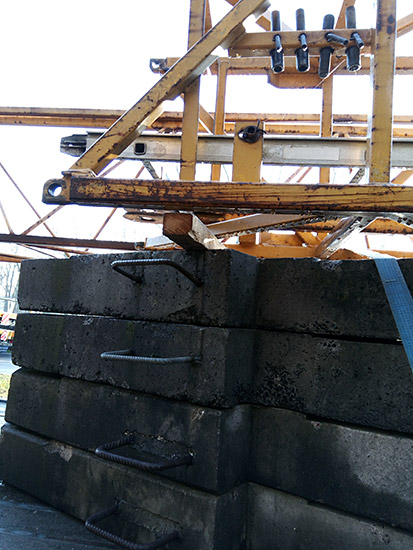 But, if we examine the load elsewhere, there is also an exception: The wooden dunnage shown in Figure 3 may not be completely square in cross-section, but it is certainly not what would normally be termed "rectangular". One very odd thing is that the top crane element is not in contact with the friction-enhancing dunnage, at least on this side of the vehicle; a fact that immediately aroused our interest. 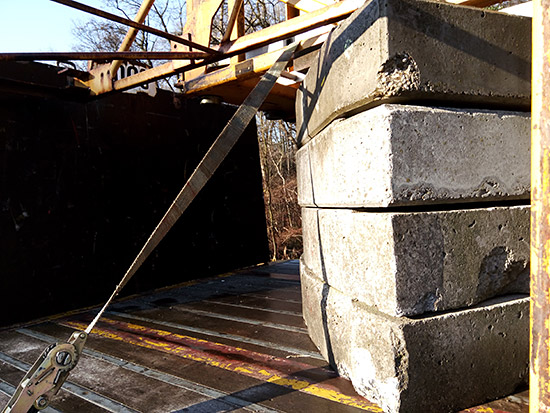 In Figure 4, we can see a typical piece of rectangular dunnage at the top, just next to the belt. This is good to see. The belt has a single twist in it, which we do not believe would cause it to be weakened as a result of constriction over this relatively long distance. And it would undoubtedly not cause it to flap in the wind. On the other hand, we observe considerable signs of wear and tear on the belt. 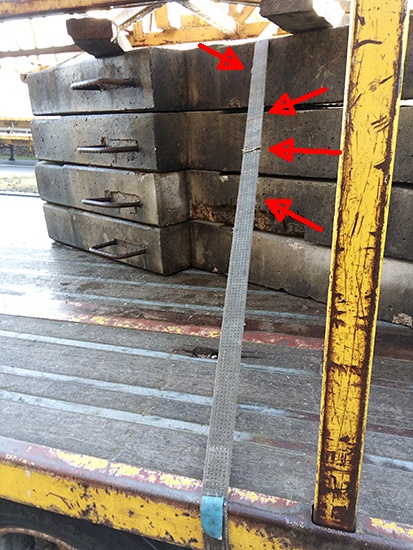 And because we are so pleased to see the rectangular dunnage, we shall take the opportunity of mentioning it again, as we can see two examples in Figure 5. Sadly, one has no contact whatsoever to the crane elements. The belt used to lash down the load here is fit for scrapping (see arrows) and the level of friction between the load and the loading surface is somewhat of an enigma. On closer inspection, the loading surface appears to be wet. Not only that, it seems to be covered with small stones. These stones can have the same effect as marbles in a cartoon, in other words, they can massively reduce the level of friction. The loading bed itself is a combination of steel and what is probably hardwood. This makes it even more difficult to estimate the effective level of friction between the concrete and the wood/steel. If the loading surface is dirty, the applicable guidelines recommend that a coefficient of friction μ of 0.2 should be used. For the combination of concrete on steel, a value of 0.2 would probably also be appropriate, but for concrete on wood, at least for softwood, a value for μ of 0.5 would be entirely justified.

Sadly, we are unaware of whether stanchions were used to secure the concrete elements, as is usually the case with crane counterweights. These stanchions could have been passed through the stacks and found adequate purchase in appropriate sockets/anchorages in the loading bed. This method of securing the load would be exemplary, as it would be tailored to the load, which is something we would always aspire to. Sadly, we fear that no stanchions were used here. And the same applies to anti-slip mats, which could have been placed under and between the concrete elements to effectively increase the level of friction. So the big question is what level of friction we should sensibly assume for this load. Because we have to take account of the steel in the loading surface and the somewhat dirty surface itself, we shall err on the side of caution and assume a coefficient of friction μ of 0.3. 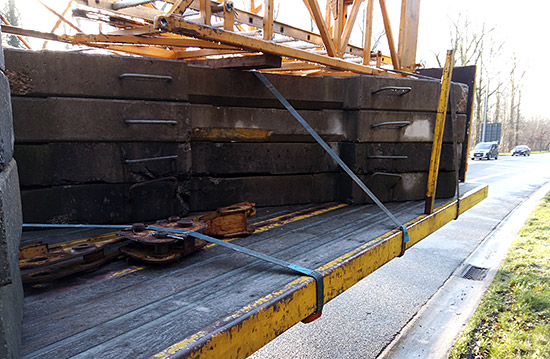 Next to the concrete elements, we discover a real gem. Lying there is a steel component that clearly belongs to the lifting or restraining mechanism of the crane. It is flat, weighs perhaps 50 or 100 kg and is secured with one tie-down lashing. This tie-down lashing is attached at an angle far smaller than 30 °. In several places, the belt used to "secure" the component appears to be suspiciously close to being declared fit for scrapping.

To begin with, let's look at load distribution. Figure 1 reveals that the concrete elements were arranged symmetrically across the loading bed in order to distribute the weight along the length of the vehicle. Because there are three stacks, arranged diagonally across the loading bed in such a way that they just overlap when seen from the side, the overall center of gravity of the concrete elements will probably be located at the middle stack. Being relatively light by comparison, the lattice elements will have no impact on this. This overall center of gravity appears to be approximately 1.5 m in front of the first axle unit, which seems to us to be extremely far forward. 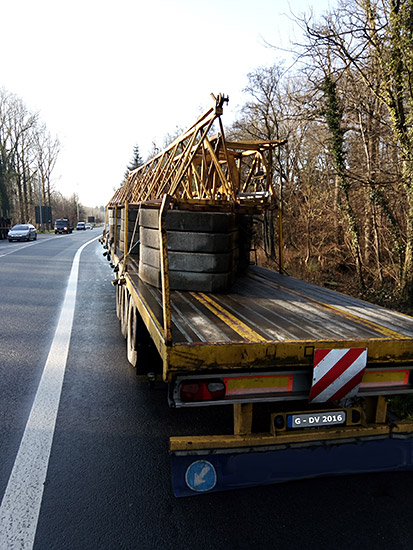 In Figure 7 we can see that there is a large space at the back, which lends weight to our assumption that the center of gravity is too far forward.

In our overall assessment, we remain extremely glad to see that rectangular dunnage has been used. Something that we are far from happy about is that tie-down lashings were the only securing method used. Figure 1 suggests that long-lever ratchet handles were used throughout. We shall therefore assume that a pre-tensioning force of 750 daN was achieved on the tensioned side of each belt and that a K value of 1.8 applies, as virtually all the belts were tensioned across the slightly rounded edges of the lattice elements. This leads to a total pre-tensioning force of 8100 daN. In calculating this value, we have ignored all angles. We have assumed a coefficient of friction of 0.4 for the combination of steel elements on wooden dunnage, but we have already determined that a coefficient of friction μ of 0.3 should be taken for the combination of concrete elements on the extremely heterogeneous loading surface. This means that the significant figure for the whole of the load is 0.3.

To put it bluntly, the securing of this load is catastrophic, unsafe and utterly uneconomical. We completely fail to understand why it seems to be almost "de rigeur" that crane elements are lashed down. And this in spite of the fact that their very design makes them ideal for direct lashings. No matter what direction, whether to the front, to the rear or to the sides, there are no end of lashing points that would allow these elements to be secured in exemplary fashion. Not only that, direct lashings also make it possible to generate considerable tie-down effects. So it is possible to adopt one method without the need to dispense with the other method.

If anti-slip mats are used between the concrete elements (if they do not already engage with each other as a tight fit) and above all underneath the concrete elements and underneath the steel elements, it is possible to secure all the elements perfectly with direct lashings, which also generate a significant tie-down effect. At a coefficient of friction of 0.6 (using anti-slip mats, preferably heavy-duty ones, of the appropriate thickness) and an overall load weight of 24,000 tonnes, a mere 4800 daN is still required to secure the load. A total pre-tensioning force of 8000 daN needs to be generated at a coefficient of friction of 0.6, and we have already roughly calculated this value, even if we were a little generous. Because we would have to use at least four lashings on each side and for each element if we were using direct lashings, it would present no problem whatsoever to actually generate this pre-tensioning force.

At this point, allow us to return to Figure 6. It seems to be a fact of life that people like to focus on the large, heavy elements and underestimate the significance of the small parts such as the one we can see in Figure 6. If a 50 or 100 kg steel part such as this falls from the loading bed because it was so abominably secured, it becomes a deadly projectile. The only words we can find to describe this attempt to secure the part are "potentially fatal negligence".