We live in an age of wall-to-wall communication. People are constantly on the phone, texting or reading text messages. Every fifteen minutes, WhatsApp brings us up to date with everything, and even our cars are full of devices that are constantly communicating with each other. But there are some exceptions: The load has been left out. In this particular case, nobody told it that they were all heading for the end of a tailback and that it was time to brake. 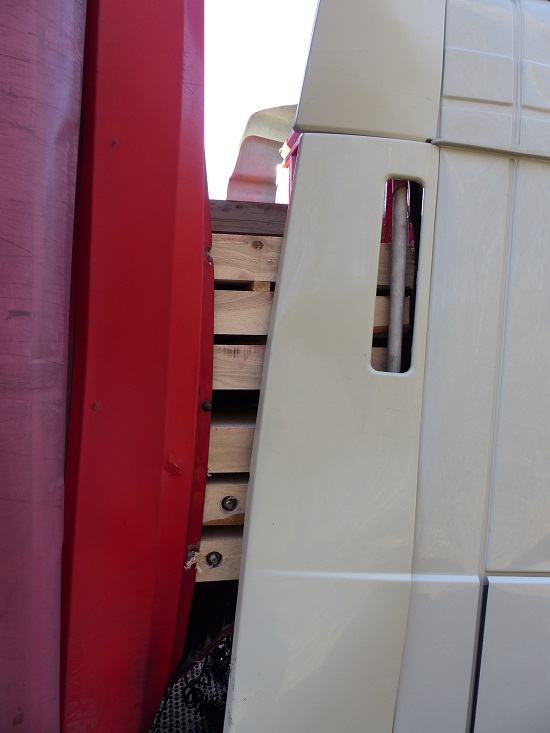 In the event, the vigilant driver braked in good time and brought the truck to a stop at a safe distance from the vehicle in front, thanks to the good level of friction between the tires and the asphalt highway surface. But he had forgotten to inform his load, which was somewhat lacking in the friction department, that he was braking. And the load was taken entirely by surprise by the sudden negative acceleration of the loading surface it was standing on. It only had a couple of forlorn belts to hold on to and made a valiant attempt to do so, but the dunnage on which the oak beams had been placed had already begun to roll. 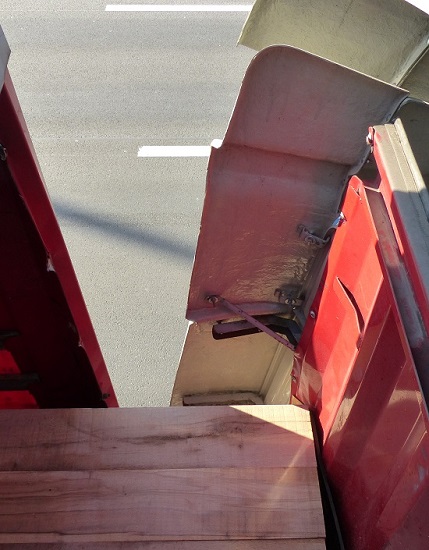 And the entire load began to move. 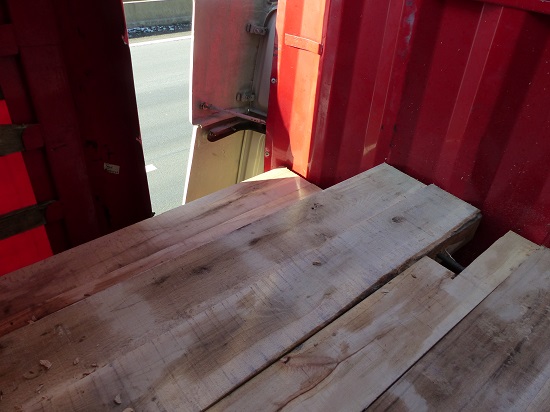 All were curious to find out where the mystery tour would take them, after all, everything had gone smoothly up until then. But then there was an almighty bang. As one, they collided headfirst against the end wall of the trailer. Thank goodness that our friends were all made of tough European oak, sawn and bolted together horizontally, so that a hefty thump against the end wall was not going to do them any harm. 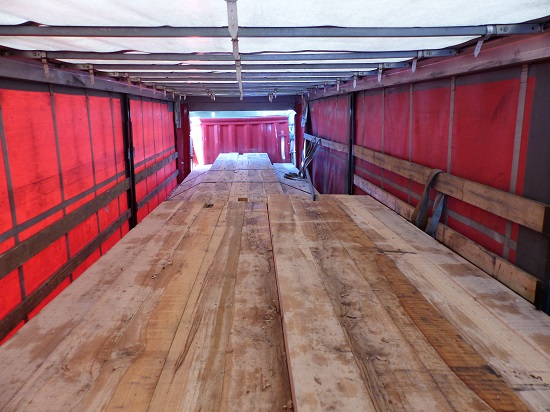 But, as Figure 4 clearly shows, the end wall was not able to withstand the attentions of the journeying wooden beams.

And in one sense, this accident really is about communication: The load communicates with the loading surface using only friction and a few assistants, which were, in this case, far too weak, too few, too small and too badly attached. The load itself is made up of oak beams bolted together horizontally. In effect this means that we are dealing with something more akin to wooden sheets made up of individual beams, and which are extremely thick. The front package seems to be secured with just two tie-down lashings. But let's have a look at Figure 5, 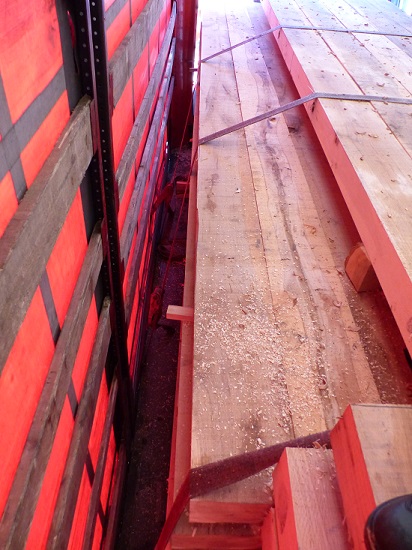 Now we can see that there is a third belt at the end of the first package. This was undoubtedly attached nearer the front, but the load has traveled a little further forwards towards the end wall. Another thing that Figure 5 shows exceptionally well is that the belts had been passed over the sharp, sawn corners of the oak beams with no edge protection whatsoever. But this was clearly not an issue, since the load has slipped forwards considerably and the belts managed to survive the slippage. 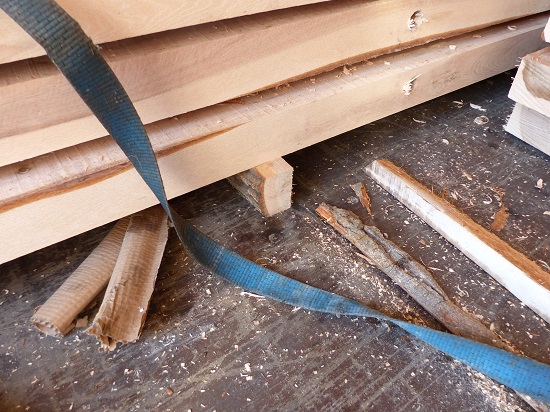 One reason why the belts withstood the slipping load could be that the load had been placed on dunnage which was standing on edge. This mnemonic will help you remember:

In the foreground we can see a belt that had originally been lashed over both packages of the load. We also get a good idea where the dunnage that we can see at the bottom right came from. The photo clearly shows that both pieces of dunnage were on edge and, as if that wasn't enough, they have bark on the corners, which tends to promote rolling and tipping. The moment this upright dunnage tips over as a result of the load slipping, any pre-tensioning force in the belts is completely lost. The load is no longer secured and is free to make its way towards the end wall. 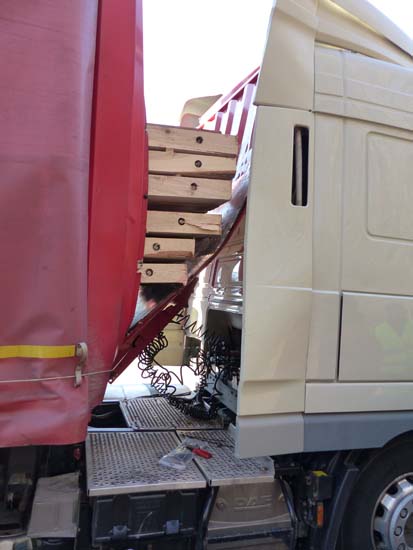 The force that must have been unleashed to push the end wall forwards out of its bolted or welded joints is truly impressive. 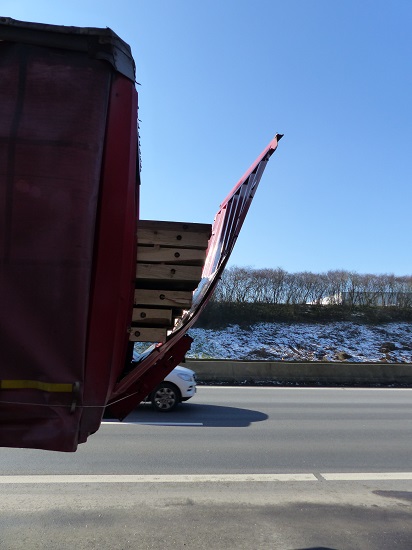 This photo shows the trailer without the tractor unit against the blue winter sky: an amazing image that speaks volumes. 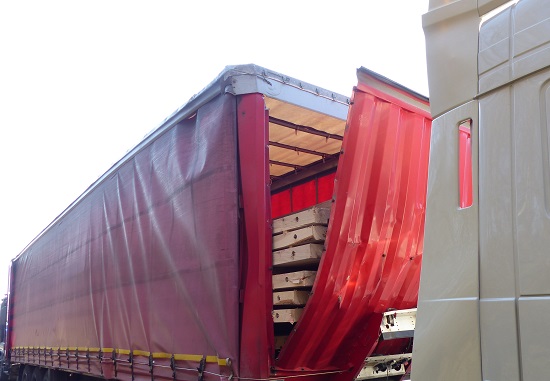 And here is a view from the side, which leads us neatly on to the question of how to secure a load like this properly.

As we have said, the belts must be protected from the sharp edges of the beams with edge protectors. The dunnage must have an elongated rectangular cross-section. Either sufficient tie-down lashings must be used on the load or it must be loaded as a tight fit to the end wall. This can be done in a number of different ways: