One thing that we, as relatively experienced load-securing columnists, regularly find utterly astounding is the almost malicious ignorance with which people attempt to secure crane components. Today, we look at a prime example: 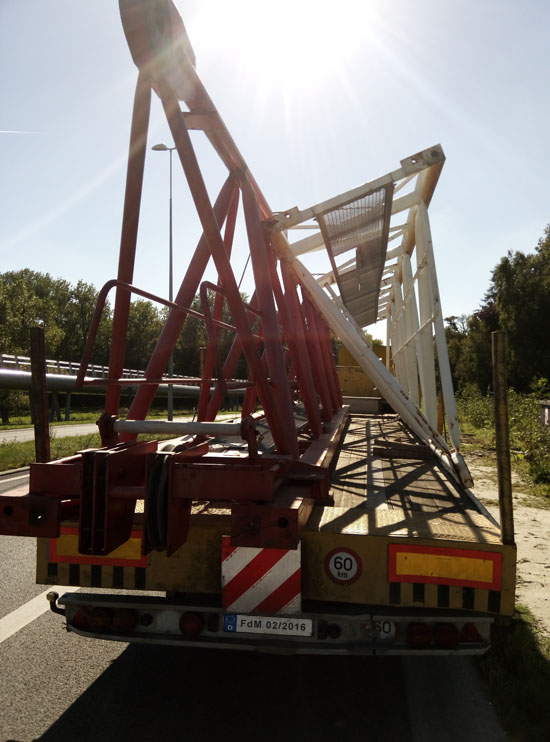 Here, the loaders have placed a crane component on its base, which is as things should be. But because this base is slightly wider than half the width of the vehicle, it was not possible to load the second, white, crane jib component next to it. But ingenuity seems to be in plentiful supply on construction sites. And some bright sparks simply turned the second component over and leaned it against the first, red one. The second crane component braced itself against stanchions to stop itself from slipping off. We are unaware of the sorts of securing forces that can be provided by the bottom of these stanchions. And, unfortunately, we were not told how much a crane component like this weighs. But the shape of the stanchions suggests that they have already given way a little; or perhaps they have been "pre-tensioned" heavily. 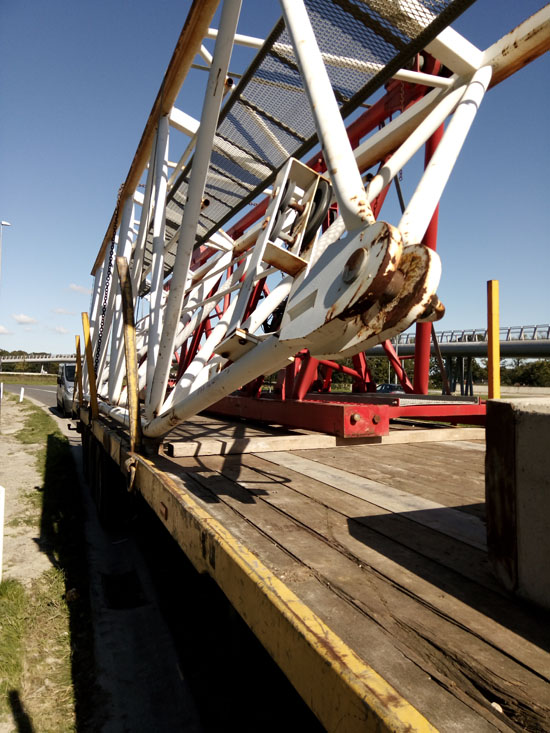 It was not without a certain morbid fascination that we registered the way in which these crane components had been secured. They are resting on the loading bed on squared lumber that has been placed across the vehicle. It is not possible to say whether the lumber was secured or not. But, as we have already said, the load was secured with three tie-down lashings. Bizarrely, one of these tie-down lashings is a chain. In essence, it is a good idea to use chains to lash down large, heavy parts. On the one hand, most chains have a high lashing capacity and, on the other, they are very resilient. But why on earth this chain was used to lash down this load, particularly as the load does not seem particularly stable, is beyond our imagination.

As we have said before, chains are eminently suited as direct lashings. But it is possible to achieve a good pre-tensioning force with them, so they can also be used as tie-down lashings under certain circumstances. But if the load moves by just a few millimeters, the pre-tensioning force collapses, and the securing effect is lost. The other two tie-down lashings are belts. 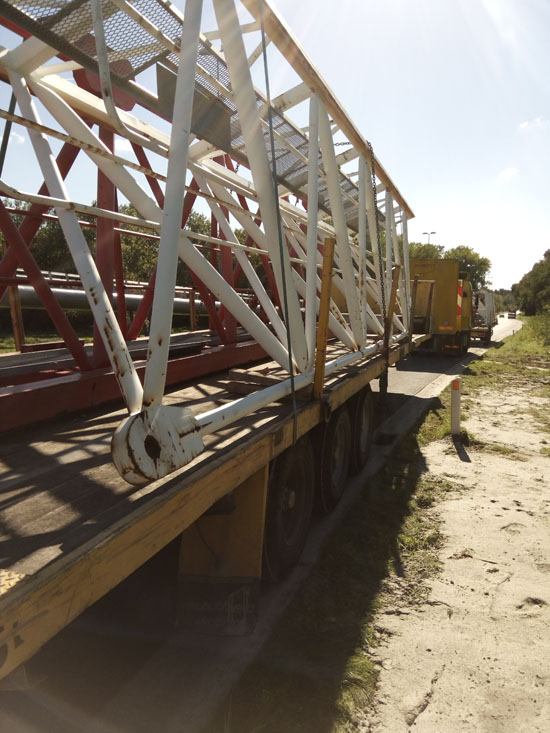 We are only able to make a rough estimation of the overall situation with respect to the load-securing, as we do not know the weights involved. So we have assumed that the two crane components each weigh 5 tonnes. As far as friction is concerned, we are uncomfortable about taking the good coefficient of friction μ of 0.45 for rough-sawn pallet lumber, as given in DIN EN 12195. These crane components both have a very small contact surface and thus exert an extremely high pressure on the contact area. Many of our readers will be familiar with this from transporting steel. The wood is compressed at this point and becomes smooth and it is probable that the level of friction suffers considerably as a result. This is one of the main reasons that we always urgently recommend the use of heavy-duty anti-slip mats for loads like this. Such mats are certified for a specific pressure per unit area, which means that the high level of friction can be used for calculations with a clear conscience.

This example demonstrates the importance of friction when securing a load and gives us yet another argument for using good, resilient anti-slip material.

Even if crane components are built to cope with tough conditions, we are of the opinion that they still don't deserve such maltreatment. The way the cargo was originally loaded means that the components rub against each other when subjected to forces, which will, at the very least, cause them to look rather battered.

So how can steel components such as these be loaded properly and safely?

To do this, it is necessary to prepare four wooden spacers. These spacers need to be fitted at the top and bottom between the crane elements. To make this easier, the transverse dunnage on the loading bed is doubled up where the spacers are to be placed, and the spacers are then laid longitudinally against the red crane element that has already been loaded. The other two spacers are for the top. To stop these spacers from simply dropping out during the journey, two boards are screwed to the top of them at right angles. Before loading commences, four loop lashings are laid across the loading bed. The second crane element can now be loaded.

It is craned on hard up against the spacer that has been placed against the left-hand side of the red crane element. While the element is still slung on the crane, the four loop lashings are passed around the load and tightened. While the belts are pulling the second crane element onto the first, the spacers are pushed under the belts to prevent the steel components from making contact. The belts prevent the spacers from being pushed out upwards.

Because we have used rectangular-format lumber dunnage on the loading bed, and this dunnage has heavy-duty anti-slip matting on both sides, the load cannot roll and the high coefficient of friction μ of 0.6 is available. The remaining securing force that is needed to the front can easily be provided by a loop lashing around both crane elements. If there is no possibility of this loop lashing (direct lashing) acting on both crane elements, a second loop lashing is needed against movement in the direction of travel. The minimum securing requirements for a load-securing arrangement based on friction are met by the loop lashings.

The way in which the load was originally secured has been changed with a relatively small amount of effort. The only problem with the way in which this cargo is loaded is that the center of gravity of the load must not be off-center in respect of the longitudinal axis of the vehicle. This must be avoided at all costs!

In this case, it is possible to position the load sufficiently to bring the center of gravity in line with the middle of the vehicle. Even though the base of the crane elements is wider than half the width of the vehicle, the load would still not protrude to the right beyond the clearance profile of the vehicle. This also is not permitted under any circumstances. Figure 4 illustrates this: 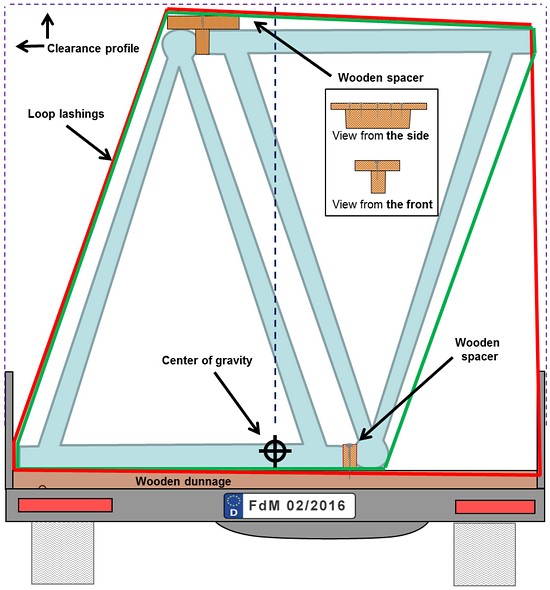 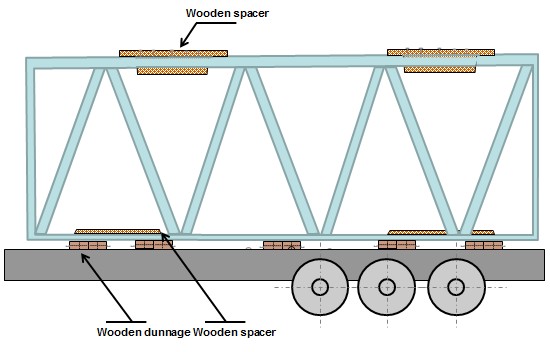 With a little bit of thought, it is possible to transform this ludicrous attempt to load the cargo into a proper, safe load with just a few changes and a couple more belts and items of securing equipment. Which makes it even more difficult to understand how a load can be sent on its way in such an unsafe state. We hope that you have had a far better start to your year of load-securing.

Your load-securing columnists wish you safe and secure loads at all times!