This is the time of year for jumping. Having said that, we are usually watching skiing stars flying effortlessly through the air rather than loads making their ungainly way into the traffic.

And when a load parts company with a transport vehicle unintentionally, it is always a dangerous business, primarily for the driver. He is sitting in front of the load, which will slip in his direction when he slows down or brakes sharply.

And then there is the truck itself, which will be damaged when a load is lost.

The third party to suffer is the load, and in this case, it was a brand-new car.

And fourthly, there is the innocent third-party, who should really be top of the list. Fortunately, a third party is not always involved. But, depending on where the incident occurs, there is a relatively high probability that a bystander will be injured or at least in some way involved.

In this month's Photo of the Month, the load hits a part of the road set aside for pedestrians when the lights are red. Fortunately, there was nobody on the crossing at the time, so that the accident was not as bad as it might have been. 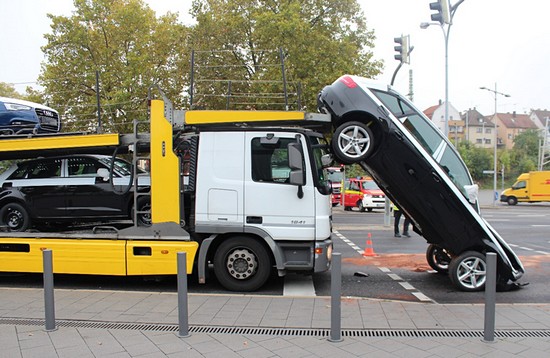 Whoever had ordered this car will now have to wait a little longer for their pride and joy. 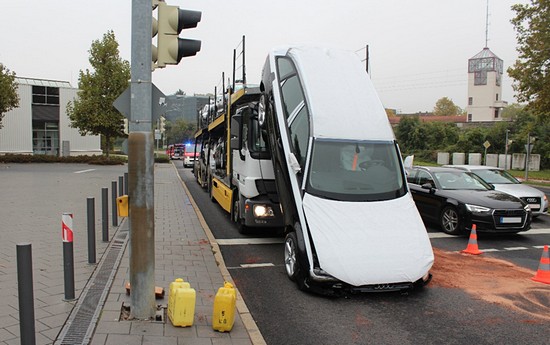 Nowadays, accidents such as these are a rarity. The reasons for this are the loading instructions issued by the carmakers and a VDI guideline specifically covering car transport. In this case, the applicable guideline is VDI 2700 Part 8.1, issued in 2009.

This guideline applies to all car carriers suitable for transporting cars, vans and minibuses up to a weight of 4 tonnes. The guideline is intended for drivers, vehicle owners, loaders and bodymakers. (Figure 3 shows the german text of the guideline. You can find the english version using the hyperlink below.)


In addition, the transport vehicle will usually have instructions displayed with diagrams showing exactly how to secure the load (see Figure 3 and the red circle behind the cab in Figure 4).

So why did this new car fall off the front of the car carrier? 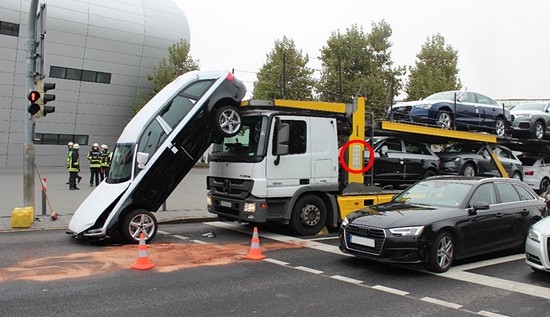 We have not been given any detailed information about the incident, so we have to rely on conjecture. Either somebody quite simply forgot to fit a securing belt or the belt was not attached carefully enough.

Depending on how the car is loaded (forward-facing, rear-facing), three or four stirrups will normally be used, placed diagonally in front of and behind the tires. The stirrups are then secured in such a way that they cannot work loose during the trip. In addition, lashing belts are used. These will usually be three-point belts with a width of 35 mm or more and a lashing capacity (LC) of 1500 daN.

These are attached to the unsprung parts of the chassis, namely the wheels. This is done by attaching a hook to the carrier deck (special steel plate onto which the cars are driven) in such a way that the belt runs almost vertically to the tread of the tire. On the other side of the tire, the second hook is attached in such a way that the lashing belt can again run almost vertically before it turns off to the side of the vehicle, where it is attached to the ratchet handle to allow it to be tensioned.

Special attention must be paid to the last vehicle loaded on the trailer or the only vehicle on a single car carrier.

In this case, two stirrups are placed in front of and behind each wheel of the last axle and the wheels are additionally secured with lashing belts as described above. Depending on the direction in which the vehicle is loaded, an additional stirrup or two stirrups and a lashing belt must be used on the frontward axle.

These notes only provide a general summary. The instructions set out in VDI 2700 Part 8.1 and the loading instructions issued by the manufacturer must be observed.

Another point to note when attaching the securing belts. Wherever possible, the loader, who will generally be the driver, should attach the securing equipment from the ground. To allow this, the top deck should be lowered as far as possible.

If this is not possible, the vehicle should only be mounted where guard rails are fitted. This is vital for the safety of the driver.

In this way, everybody makes an important contribution to road safety and protects the driver from excessive pressure.