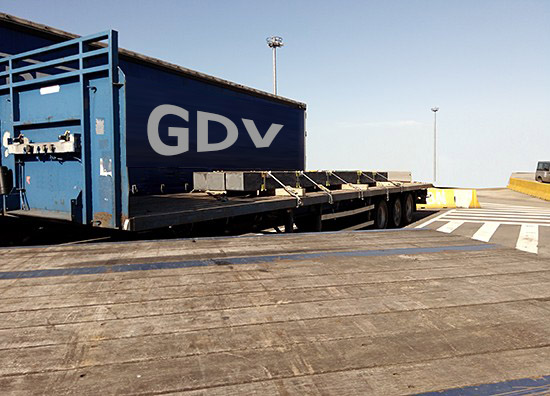 On this trailer, we can see three impressive lengths of steel that have been left in a large parking area at a ferry terminal. At first glance, we see five belts, clearly equipped with long lever ratchet handles, from each of which a hook is dangling. That was the first thing that caused our brows to furrow. One good thing to notice here is that edge protectors have been used throughout the load. The surfaces of these lengths of steel, which have clearly been transported directly from the steel mill, are still covered with very rough mill scale which can damage the belts. 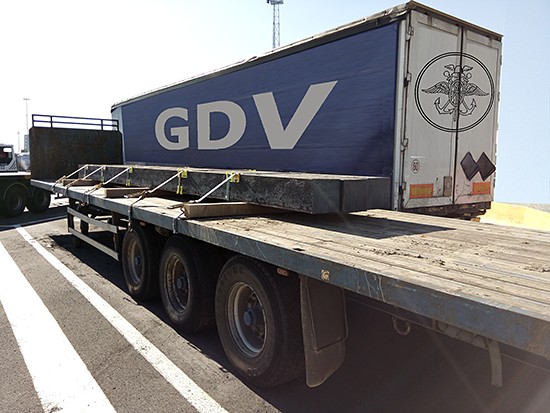 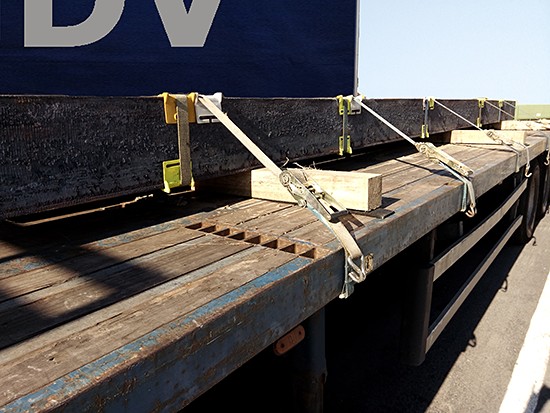 Figure 3 justifies a few more positive comments. Edge protectors have been used wherever the belts come into contact with the steel lengths. These protect the belts against the sharp-edged abrasive load and allow them to slide more effectively around the cargo. However, that is the last good thing we have to say about this load and the way it is secured.

The ratchet handles of all the belts are all problematic, as the dangling hooks indicate. They show that each belt used here was threaded through the ratchet handle, passed over the cargo as a round-turn lashing â€“ or silly loop â€“ and then inserted in the ratchet handle again on the opposite side (see Figure 4) before being tensioned on both sides. Fixing a ratchet handle on both sides and clearly pretensioning extremely well is, first of all, a lot of work and, secondly, the loaders clearly considered the question of load securing very seriously. Unfortunately, they decided to use a round-turn lashing â€“ or silly loop. The term „silly loop“ speaks volumes because it describes an unintelligent way of tying up a load. In fact, the silly loop gathers the load into a bundle. However, the load is actually secured only by the relatively small tie-down force of the lashing and the friction of the belt against the cargo.

But just think what could have been achieved with 10 tensioners and 10 belts! In particular, if friction were to be taken into account properly during the implementation of the load securing measures. Although we do not know the dimensions of this load, the very fact that the supporting lumber, which has an estimated section of 12 x 12 cm, is bent upwards on both sides suggests that the vehicle is, at the very least, fully loaded. How much better it would have been if the anti-slip material, which has clearly been used at the ends of the lumber, had instead been laid underneath the entire length of the lumber. Even if the cargo is covered with rough mill scale, we do not know its friction against the timber. It would therefore under any circumstances have made sense to pass on the high friction of the anti-slip mats to the load itself. To do this, all that is necessary is to also equip the top side of the lumber that is used as dunnage here with anti-slip mats. Furthermore â€“ and we shall never tire of saying this â€“ it is not sensible to use square dunnage, because this tends to roll if the vehicle accelerates in the direction of travel. Instead, rectangular (plank-like) dunnage that will not roll should be chosen. 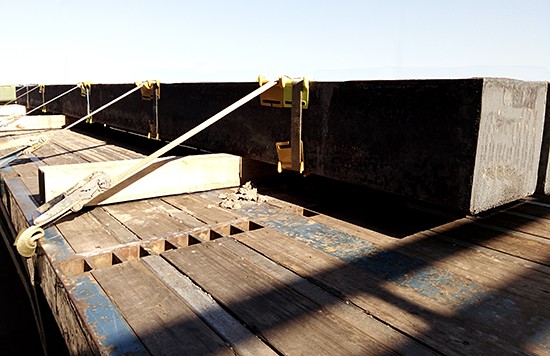 In Figure 4, two things leap out at us: Firstly, the fact that here the far end of the belt has been threaded through so that this round-turn lashing could be pretensioned from both sides. And the second is the less than perfect level of cleanliness that we can observe very clearly not only in Figure 4 but also in Figure 2. Anyone who loads cargo of this weight with such „care and attention“ will not be getting a Christmas present from this load securing team.

Figures 1 and 4 also show the front ends of these lengths of steel. What cannot be seen is any attempt at load securing.

Because it is advent, we are going to have some fun and try to calculate what is involved in this special form of load securing. Let us assume that the load weighs 24,000 kg. This then has an approximate weight force of 24,000 daN on the surface beneath it. We assume that the square lumber below the cargo is bolted firmly to the base below it and, because of its extremely rough surface, we will allow the load itself a coefficient of friction of 0.45 μ. We further assume that each tie-down lashing (which we can perfectly well consider these painstaking round-turn lashings to be) contributes 750 daN on each side. This means that the load is „secured“ with 7,500 daN of pretensioning force. Unfortunately, these 7,500 daN are not applied vertically. Instead, at an angle of approximately 30°, no more than 50 % of this load securing force is acting vertically downwards. As a result, the pretensioning force acting vertically to increase the friction is reduced to 3,750 daN. If we now multiply this nevertheless considerable pretensioning force by 0.45, we come to 1,687.5 daN of securing force compared to the 8,400 that are actually needed. We are therefore missing 6,712.5 daN of securing force, even though we assumed unfeasibly high pretensioning forces and a very high coefficient of friction – in the same way as we ignored the fact that the dunnage consists of squared lumber.

How things can be improved:

Side view (vehicle traveling to the right):

Ultimately, we have barely had to expend much more effort than the gentlemen who tensioned the silly loops so industriously. For the North Sea, we need seven belts and for the Baltic and road haulage, six. And all we have done is use the belts the way they were intended. Nothing more. But that’s what counts.