When good intentions kick the bucket

In Figure 1 we can unfortunately only see the top part of a van and its loading surface:

Directly behind the cab, a fixed mounting for long loads has been installed on the loading surface and certainly gives the impression of stability. Mountings or supports of this type are commonly used by joiners and carpenters as well as by metalworking firms. These attachments/supports are perfectly able to transport objects that are longer than the vehicle itself. Here, to make it possible to transport one or even two solid steel beams, the vehicle is equipped with a second, probably mobile, support which also looks extremely robust. Because the use of this support on the vehicle is optional, it is secured with a tie-down lashing which has even been passed around the side. The steel beams themselves are also secured by a tie-down lashing. Furthermore, it looks as if anti-slip material has been placed on the steel support on which they are resting – at least at the rear.

Because the load extends well beyond the vehicle at the rear, a red warning flag has been attached, just as it should be. If you cast your eye forwards a little, you will see something round … And yes, as we guessed, there is a metal bucket hanging there.

The person responsible for securing this load clearly decided to show off his creativity. Because there are probably two beams here, the bucket is intended to hold them together (unitize them) and, first and foremost, provide a load securing point (Figure 2). The intentions behind this type of load securing are good. Unfortunately, its execution is spoiled by certain practical errors. 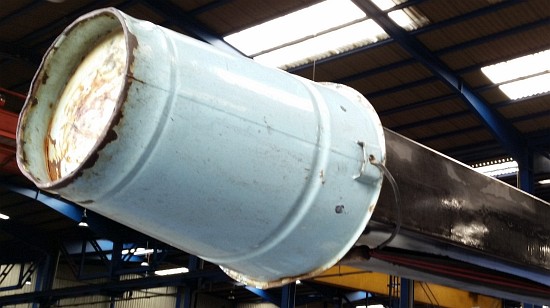 How can this type of load be secured properly?

A number of manufacturers supply special load securing bags that can be pulled over the beams in order to secure loads exactly like this. Appropriate load securing equipment can be fastened to these bags, or shrouds. This type of load securing equipment has been specially designed for the tough job of transporting steel materials and make it possible to restrain them securely. Using anti-slip material on the loading frames themselves is a good idea. However, it would be considerably better if the tie-down lashing were to be replaced by four loop lashings.