Dear readers of our Photo of the Month column. This month, we would like to start with a critical look at ourselves. There are only two ways of looking at it: Either our work as "load-securing columnists" is not having a great deal of impact, or we are still only at the start of a very long road. Either way, we still have a steady stream of colleagues and other interested parties from across Europe who are taking notice of the load-securing issues we are raising and sending us their photos. After almost 15 years writing this load-securing column, we had hoped to see a far greater impact on day-to-day practice. But this clearly shows how naïve we were when we first started. Having overcome our initial bout of depression, we took this Photo of the Month in particular as a fillip to press on for at least another 15 years, using this column to pillory lost loads, poor load-securing, irresponsible loaders, and sometimes come to the defense of helpless drivers. 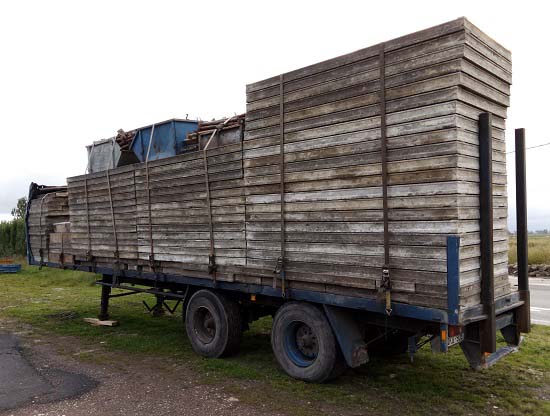 But to our Photo of the Month, "A different slant": Approaching this trailer, we first see that the load has been stowed relatively compactly and, if we don't look too carefully, we could assume that a certain amount of care had been taken securing it. 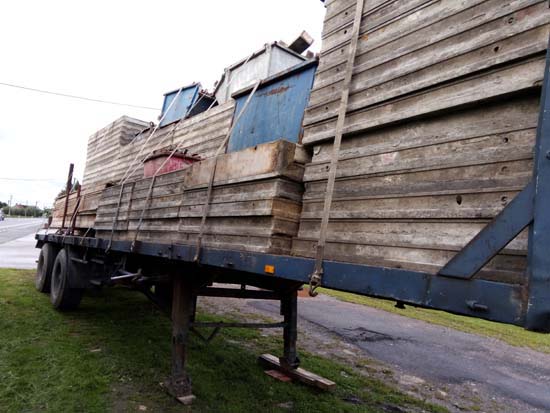 But we shall let the cat out of the bag straight away and have a good look at the photo. Even as hard-boiled columnists, we were somewhat surprised. André Brusselle, who took these photos, already provided us with an extensive list of faults and transgressions, and we were extremely pleased to see such an acute eye and sound understanding of load-securing. But let's have another look at the "different slant". It is not just that this vehicle has been loaded to one side, nor that the second photo has been taken from an unfortunate angle, giving the impression that the trailer is slanted to the left. No, the front right tire of the first axle assembly is actually off the ground, as can be seen clearly in Figure 6. If we take a closer look at Figure 2, we might imagine that the first stack of the load had slipped to the left and that it was perhaps this that had caused the driver to remember his responsibilities towards other road users and the public at large and park his trailer here. Parking and decoupling the cab must have had the driver on tenterhooks. We at least would have been entirely uncertain as to whether the trailer would remain upright without the cab. But perhaps we are doing this loading arrangement an injustice, and the trailer is resting far better on its landing legs than it was on the tractor unit. In Figure 1, the landing legs appear to be a little slanted, but this could well be due to the poor perspective. 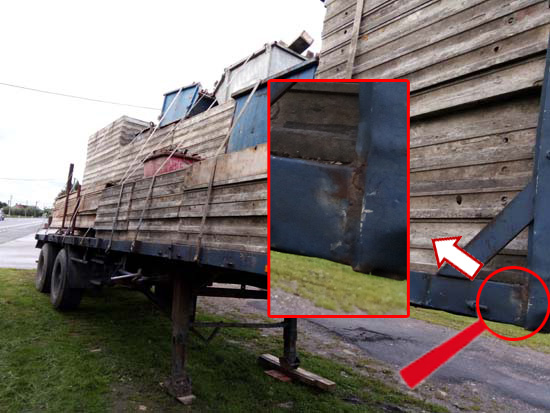 Walking past this trailer, we are immediately assaulted by a wealth of impressions to offend the sensibilities of any champion of safe loading and transportation. Thanks to the high quality of the photos sent to us by André Brusselle, we are able to really zoom in on details and inspect them thoroughly. Figure 2a shows the joint between the end wall and the loading bed. This has clearly cracked, and the lack of paint indicates that an attempt has been made to weld the cracks, probably not for the first time. If we take just one step further, we notice the "deluxe fitting" for a belt; a belt that shows a level of damage, even at this point, that would justify it being scrapped twice over. Because the hooks are not exactly suitable for this vehicle (as can be seen elsewhere), the driver or whoever was responsible for securing this load, simply pushed the belt over a hinge to which, in the dim and distant past, a side wall would have been attached. Apart from the fact that the hook itself is protruding beyond the width of the vehicle, at a loose end in every sense, and that there is nothing preventing the belt from simply slipping off a securing point such as this (especially if the load were to move forwards slightly), we thought that this method of securing the belt was rather "cute" (Figure 2b). 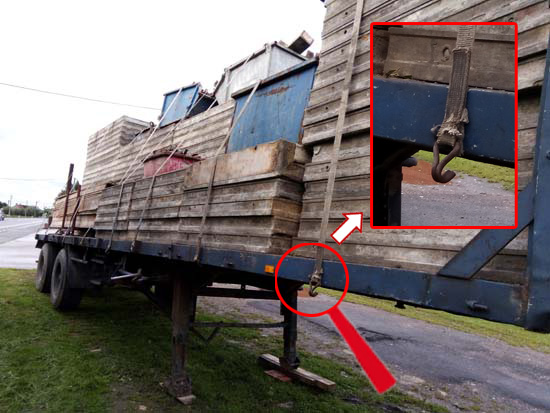 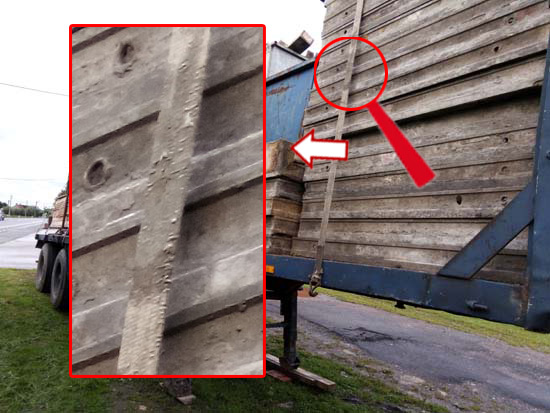 We are still standing at the same position, but have now looked a little bit further up. We have already seen two good reasons to scrap this belt at the point at which it was secured. And now, on the right-hand side of the vehicle, we find no less than six further places where the belt is damaged to such an extent that it cries out to be scrapped, even by the most penny-pinching criteria. 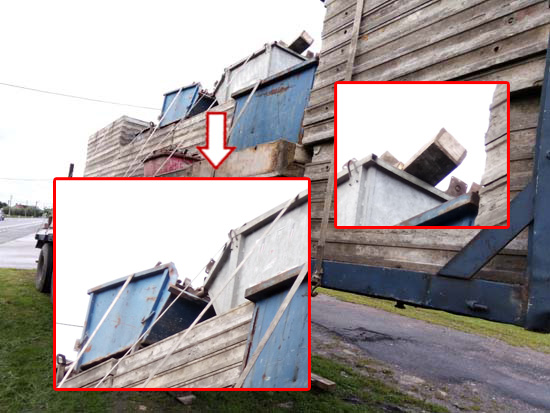 A number of different containers had been placed on top of the load, which comprised shuttering elements for concrete construction. Aside from the fact that only one of these containers boasted two purely "decorative" belts (that were also fit for scrapping), when we took a couple of steps back from the vehicle, we immediately noticed an assortment of items cheekily peering out of the container. And clearly, this artistic approach had been adopted when loading all the other containers as well. Of course, it is not in itself a problem if parts of a load protrude out of a transport container of any kind, but given the quality of this vehicle and the confidence inspired by the securing measures that have been taken, we find it a little difficult to assume that these containers were loaded with due care and attention. 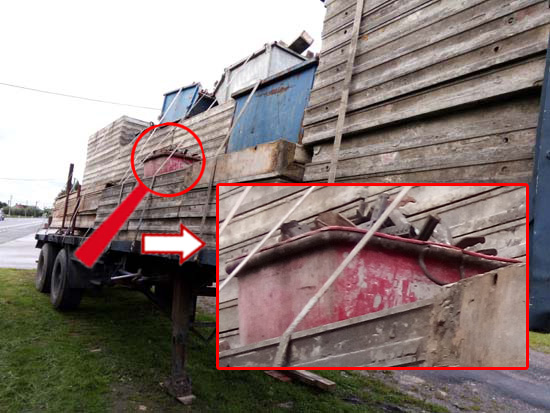 We were enthralled by the small, red container that had been loaded a little further down on the right. It had been loaded with considerable artistry, and its contents gushed forth in carefree abandon. On the other hand, the measures taken to secure it were entirely underwhelming. The detail (Figure 2e) clearly shows that the load-securing equipment does not even come into contact with the container. But it is probably resting so firmly on the load below that it requires no additional securing. This good, tight-fit securing will, in all probability, be entirely effective to the front and to the sides. But we did not clamber onto the vehicle, for fear of being disappointed. 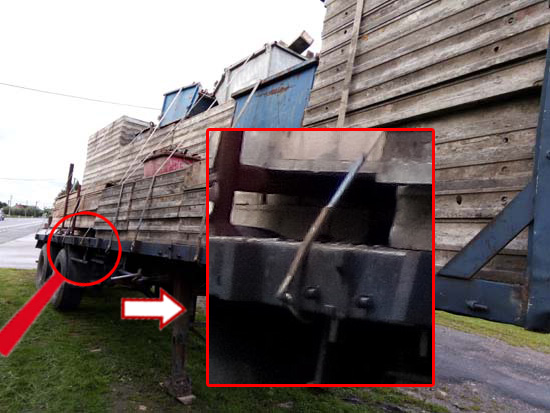 Why the genius who devised this work of load-securing art did not push the 5th belt from the front over the hinge as he had done everywhere else, but instead hooked it into the frame will forever remain a mystery. 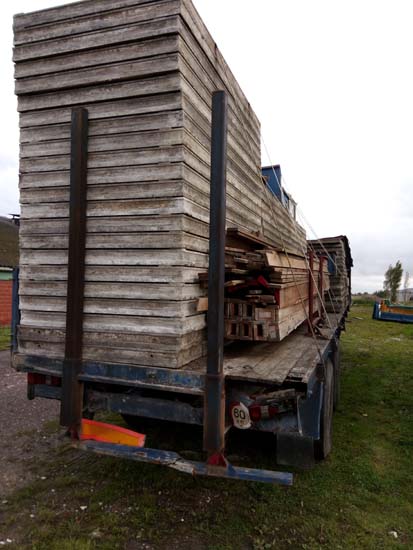 Figure 3 reveals why this vehicle is slanted so far to the left that the front right wheel of the trailer has lost contact with the ground. Load distribution plans only cover distribution of the load along the length of the trailer, but the general principle is that the cargo should always be loaded centrally as far as possible. Any asymmetry to the sides has a catastrophic effect on the driving and breaking behavior of the trailer or the vehicle and must always be avoided. The thought processes that might have gone on in the head of the person who loaded this vehicle are unfathomable. Even as they were loading the cargo, they must surely have feared that their artistic creation would have tipped over to the side along with the trailer.

Permit us a few words on the condition of the trailer. The sticker that provides information on the statutory roadworthiness inspection of the trailer certifies that it was in acceptable condition up to 2012. Sadly, these pictures were taken in August 2015. If we take a look at the rear underrun protection, the elegant restyling of the right rear lights and the loading bed frame on the right rear, which is noticeable by its absence, it comes as little surprise that the person responsible for this trailer which has, after all reached the ripe old age of 25 1/2 years, did not consider it a sensible move to present this heap of scrap for inspection again. 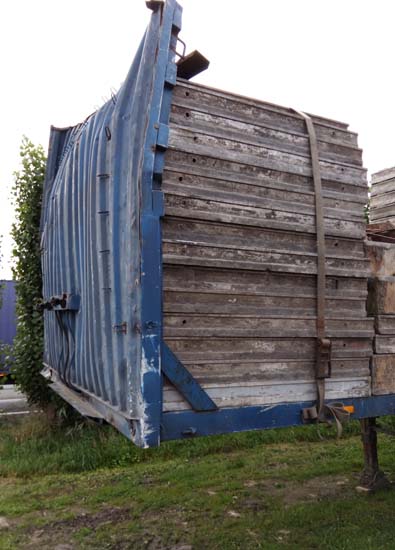 We have now moved on again and are looking at the end wall from the front left. This photo provides us with an excellent opportunity to savor a potential nuance of the term "tight-fit". The end wall appears to be cradling the load with all the tenderness of a loving mother. With the exception of a few scrapes and scratches, the front left of the end wall is clearly intact. 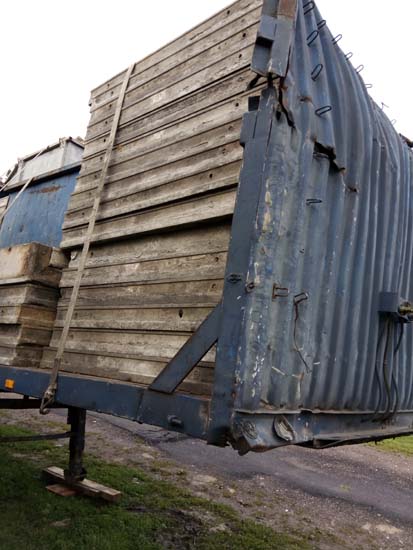 Driven by curiosity, we move around to the front right, only to be confronted with the sobering insight that what we had assumed to be an expression of caring tenderness is clearly the result of one, or probably more, severe batterings. At the front right, the vehicle frame has suffered massive damage. The end wall has split in several places and the corner post of the end wall has also become disconnected at the bottom. 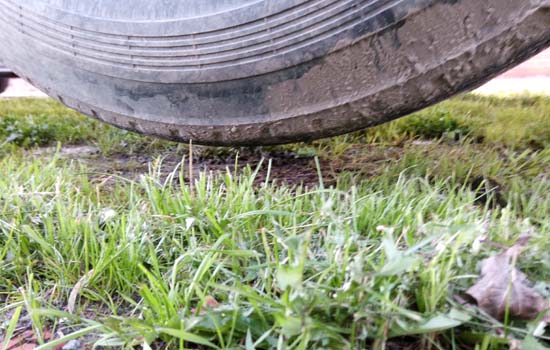 This figure shows the front right tire which, as we have already mentioned, is so far off the ground that a mouse, possibly even a small rabbit, could happily run under it with its ears pricked up. Confronted with this alarming evidence and considering the bizarre way in which the landing legs have been chocked at the front, in particular on the left of the vehicle, it was perhaps somewhat careless to approach the vehicle from the left. 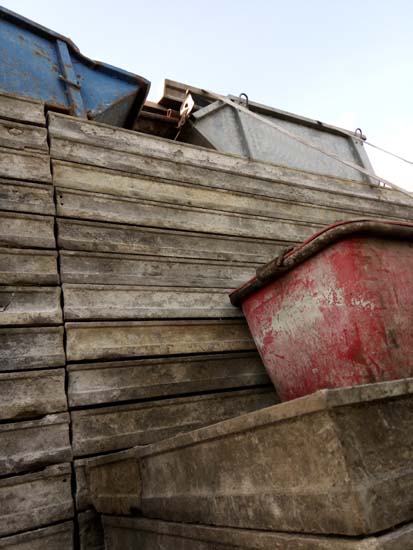 We have already said enough about the fact that an assortment of loose cargo was being transported on the containers. We shall content ourselves with a brief comment about why the belts were in such a dire condition. The load is, after all, made up of shuttering panels with relatively sharp edges and spattered with dried-on concrete. The vibrations, coupled with the fact that the belts flap in the wind, are quite sufficient to render a new belt ripe for scrapping after just a single journey. 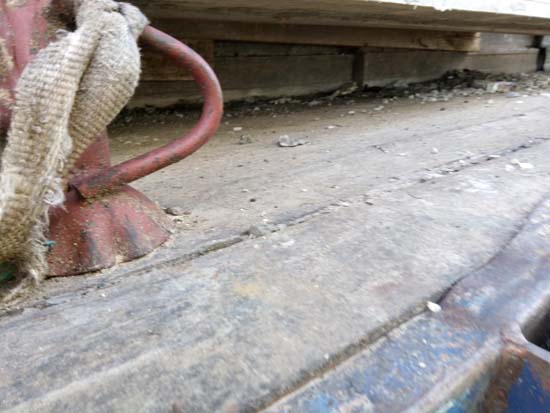 This photo completes the picture. The level of cleanliness we see with this load is truly astonishing. In particular when we remember how this load was (intended to be) secured. Tie-down lashings were used, and these rely solely on increasing the level of friction in order to keep the load where it was originally "stowed". This consignment is a shining example of everything that should be avoided at all costs.

We have decided not to include any suggestions as to how to remedy the situation, as this would make this Photo of the Month far too long. And we would ask our regular readers to forgive us that we have simply been unable to approach this case with the due seriousness you have come to expect. We solemnly promise to have recovered that sense of seriousness in time for our next Photo of the Month.

We wish you a safe and secure journey.
Your load-securing columnists.