In the light of the current heatwave, with temperatures of 30 degrees and more, these photos can fill people with a certain sense of loss. The incident is far from a rare occurrence. The articulated truck was making its way onto a motorway slip road. In doing so, it came out of a bend onto the acceleration lane, which was fortunately separated from the main carriageway of the motorway by a crash barrier. As the final photo shows, the truck started to lose its load at the apex of the bend, where the lateral acceleration loads are at their greatest. 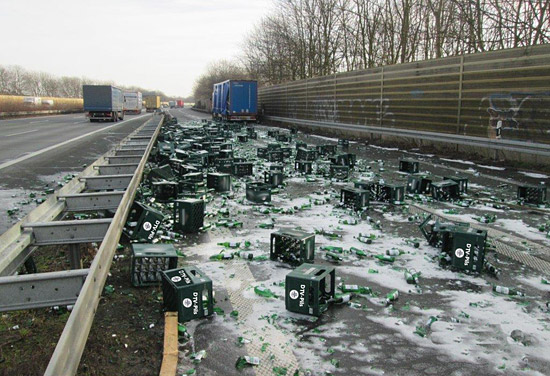 The load clearly toppled into the tarpaulin, which then gradually gave way, effectively dropping a constant stream of crates onto the road. This resulted in the lost load stretching over a distance of some 100 m. 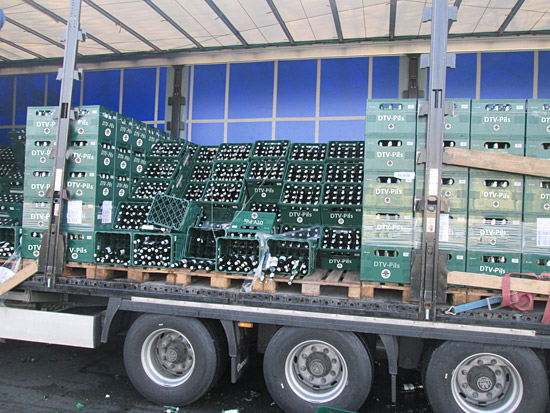 Clearly, the weakness of the body was the tarpaulin and the removable wooden slats. Wherever the stanchions were able to resist the movement of the load, it stayed put. For this reason, we shall concentrate on the area between the stanchions. 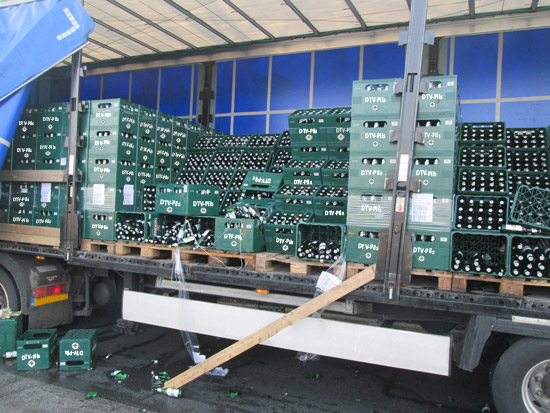 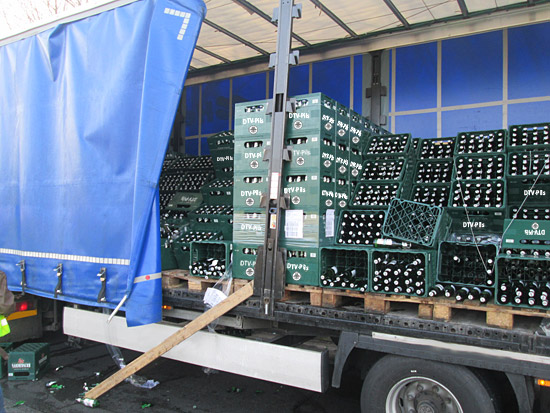 The information that we have from the scene of the accident indicates that the truck was a Code XL vehicle. As a basic principle, vehicles of this type should be capable of restraining loads such as this by means of the body alone, provided that the load is stowed as a tight fit. The photos alone do not offer sufficient evidence to confirm that the truck was an XL vehicle, but the diagonal bracing under the roof does suggest that this is so.

XL vehicles (at least those with which we are familiar) are only able to pass their securing force through to the load if it is loaded as a tight fit against the body, and even then only if a number of conditions are met. One such condition is that the diagonal cables under the roof are properly tensioned when the body is closed. Another condition is that all the removable slats are present and in their correct positions. On those vehicles that we as load-securing columnists are aware of, removable aluminum slats are used. The cross-section and/or shape of these mean that they can transmit the forces acting on them to the stanchions efficiently and reliably. Despite careful inspection of the photos, we were unable to find any aluminum slats at all. Instead, wooden slats, and clearly too few of them, were used. We have no information on the quality of the slats. 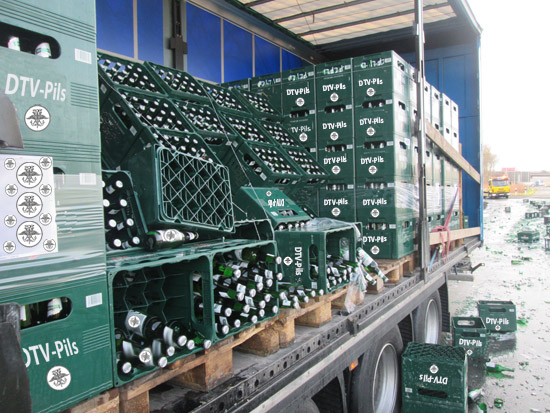 If a load is to be secured entirely by the vehicle body, the tarpaulin, the stanchions and the removable slats, it is vital that the right number of slats are used and that they are of the right construction and quality and that they are in the correct positions. If this is not the case, Code XL approval for a body is worthless in respect of load securing. It is even crucial that the diagonal braces under the roof are intact and fully tensioned to ensure that the opposite side is able to "assist" by making its own stability available in the moment that the load forces begin to act.

But if the correct removable slats are not used, the force cannot be transmitted to the stanchions. Figures 2 through 5 provide an excellent demonstration of the result. Clearly, it was marginal that this load was lost, as the load stayed put both at the rear and at the front. At the front, we reckon that the fact that the tarpaulin was more firmly attached to the end wall provided greater strength. At the rear, we can see that the load was additionally secured against tipping with a loop lashing around one or more pallets stacked vertically. Securing the load in this way also generated inward forces, which was clearly enough to prevent this part of the load from being lost.

We load-securing columnists have in the past often taken some "pleasure" in following the online press as systematically as possible over a period of a few months. In some months, we came across anything between eight and twelve lost loads where bottled drinks were being carried. None of these loads were lost at high speeds. Rather, they tended to be lost at roundabouts or when the vehicle was negotiating some kind of a bend.

So how is it possible to avoid loads of this kind being lost in the future?

There are a number of considerations if a load is to be secured only by means of the body of the vehicle:

This means that any responsible loader has to check not only whether the prescribed quantity of removable slats are available on the vehicle, but also whether the slats are in a good condition or whether they have been crushed or, even worse, kinked.

Only when all the elements of this seemingly fragile securing system are in excellent condition is it possible for a tarpaulin body without side walls to restrain a load. But if these prerequisites are recklessly ignored, as was the case here, it is just, at least in this example, a tragic waste of beer. If the accident had happened elsewhere, of course, the lost load would represent a hazard to life and limb for other road users.