This is by no means the first time that we have written about the hazards associated with poorly secured or unsecured loads of steel and the potential consequences of such loads. But real-life experience constantly offers up new variants and examples that seem to us to be well worth taking the time to discuss.

Figure 1 shows the probable course taken by an articulated truck with a mixed load of steel parts as it turned off from a highway. The vehicle turned off to the right on a filter lane. Where the filter lane joined the main carriageway, the road surface was in parts uneven and had a number of potholes. 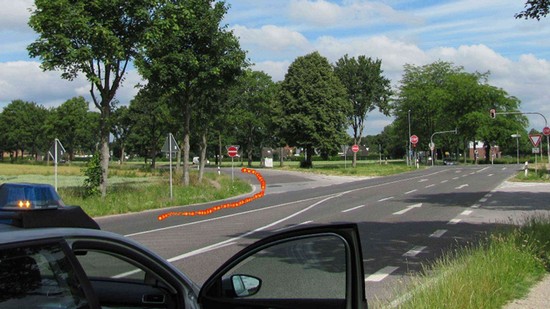 Our Photo of the Month will have a look at whether the incident was the consequence of the unevenness of the German highway, the infamous element of excessive speed or perhaps inadequate load securing. 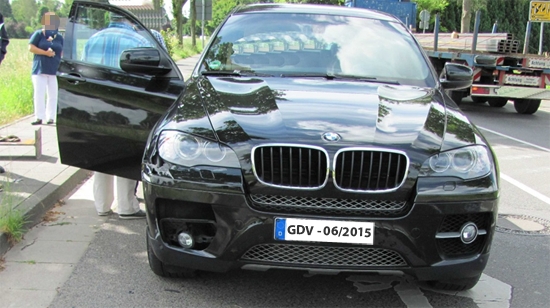 So what happened? Two smallish steel parts fell off the loading bed to the left, crashed into the asphalt and rolled across the carriageway.

Finally, they used up the last of their energy by colliding with the front spoiler of an oncoming car: 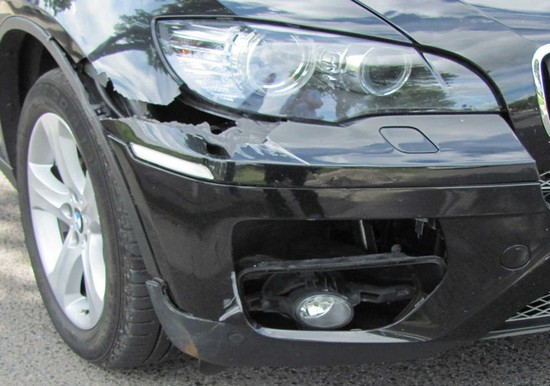 They finally came to rest on the edge of the carriageway and were moved to the sidewalk by some helpful bystanders: 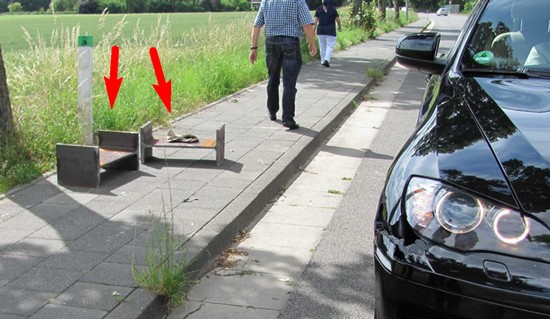 The consequences would have been unthinkable if the load had fallen from the truck just a moment later and had collided with the windshield of the oncoming car rather than with the front spoiler.

So what went wrong?

The figure below shows a view of the whole vehicle with a mixed load of steel. Because of its form and in particular its high weight, a load of this type places great demands on the load-securing mechanisms used.

At first sight, it is clear that this vehicle is probably used regularly for transporting steel. It is equipped with short stanchions, wire rope tensioners and a large quantity of squared lumber that has clearly been used against the end wall to distribute the load of this cargo.

The next thing we see is six tie-down lashings using the wire ropes and tensioners. At the front of the vehicle, we can see further tie-down lashings, in this case using belts. All the load-securing equipment had been well tensioned, which is not always something that we can take for granted. The cargo was obviously loaded as a tight fit against the end wall, which was protected against point loading by the squared lumber described above.

Tie-down lashings achieve optimum lashing efficiency at lashing angles in the range 60° through 90°. In this example, however, it seems that the angles are far smaller.

The following photos show rather more clearly that the load had, in part, been placed on anti-slip mats. In combination with a tight fit to the end wall, bundling of the load to form individual packages (load units) and the tie-down lashings, the systematic and effective use of friction-enhancing materials would have meant that this load was ideally secured. Even the bottom dunnage had friction-enhancing material on both sides.

So not everything was bad.

But now we come to the actual problem.

Figure 6 shows the load at the front of the bed. We can clearly see that short sections of I-beams had been stacked on top of the main load. They have an extremely small contact area with the load underneath. In fact, it would not be wrong to say that they are merely balancing on the load: hardly what could be termed safe transportation. 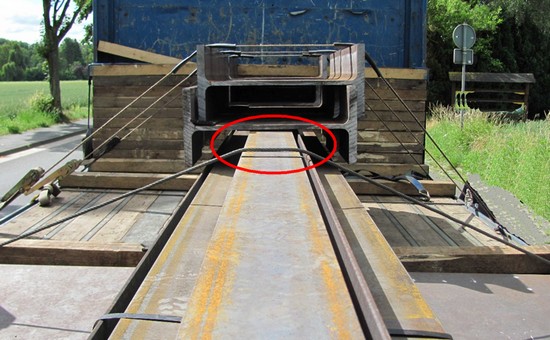 The next photo shows the half-hearted approach to the use of friction-enhancing materials. Friction only takes full effect when each of the individual elements of the load are fully isolated from each other and the load is fully isolated from the loading surface. Here, the use of anti-slip materials appears to be more decorative than anything else. Sadly, this is a waste of time and money. No attempt was made to use anti-slip mats at the point at which the I-beam sections are perched on their "balance beam". 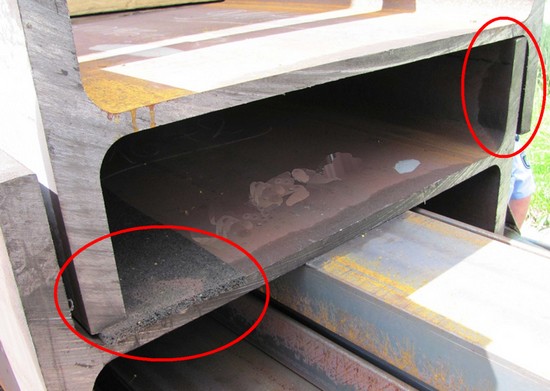 Figure 8 shows wire lashing ropes that have been fit for scrapping for some time. A considerable number of the visible single wires have failed and the wire rope is no longer round in shape. Whenever strands are pushed out from the periphery of the rope itself, it is time to look at replacing the equipment. Steel ropes may be robust, but they are of limited use in securing steel. It is imperative that wire ropes are protected from sharp edges. When a wire rope is deflected, the deflection should be at least six times the diameter of the rope in order to avoid kinking. Specialist dealers offer protective corners and similar equipment for this precise purpose.

Figure 9 shows a number of "notches" on the surface of the belt, and any of these would be enough to justify scrapping the belt. Such notches arise whenever the belts are not protected from the sharp edges of the load. If the protective sleeves are not adequate for these tough conditions, there are even better ways of protecting belts. Although chains are considerably more robust and need no protection, they are very difficult to handle with sharp-edged loads such as this. 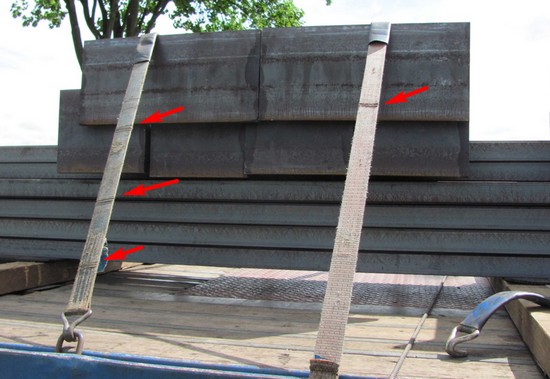 It is questionable whether this belt would have survived if subjected to a load: 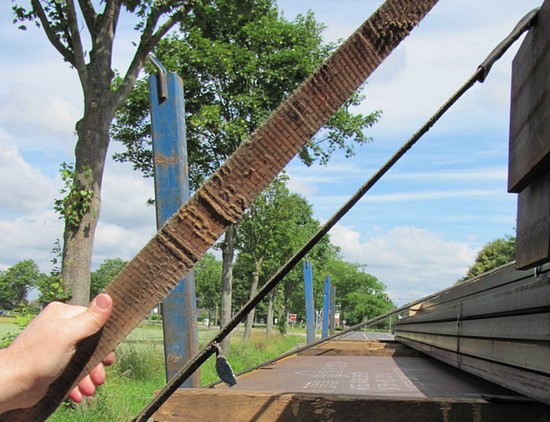 Figure 11 shows a familiar problem. The vehicle is not fitted with sufficient load-securing points, so the driver was forced to hook the belt hook over the frame of the vehicle. It is evident that the hook is subject to a bending load, and the many instances of deformation of the vehicle frame indicate that it is clearly not designed to be loaded in this way. Claw hooks can considerably alleviate problems such as these. 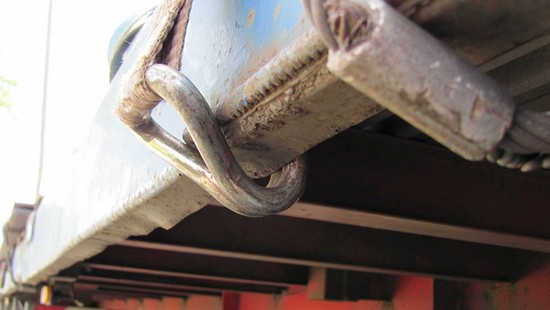 And now, at last, we can reveal where the steel parts came from before they turned into ploughshares.

The gap between other stacked I-beams indicated in Figure 12 was where the small steel parts were originally loaded: 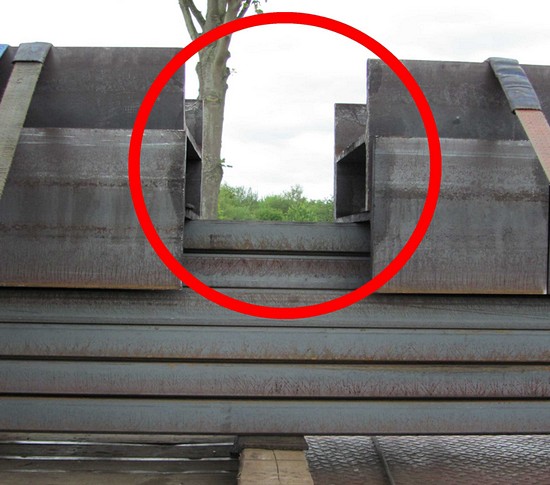 The two parts of the load also suffered from the problem that they had a very small contact area.

Other factors probably included the fact that the road surface was uneven in the vicinity of the filter lane and that it would probably have been necessary to turn to the right more sharply at the end of the filter lane to avoid crossing into the oncoming lane.

In any event, the movement of these parts of the load was enough to cut through the lashing belt, allowing them to escape.

The original suspicion when the accident was first recorded, namely that the parts were unsecured, can be discounted on the basis of the belts that have been cut through: 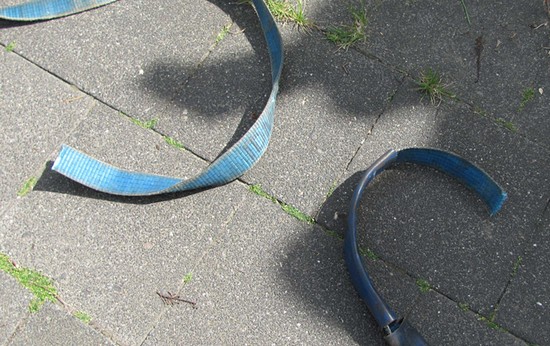 It is quite astonishing that the lost parts almost entirely filled the gap, but nevertheless managed to fall off to the side rather than jamming and being held in place by the other steel parts.

Figure 14 shows the fresh marks where the steel parts impacted with the bottom dunnage: 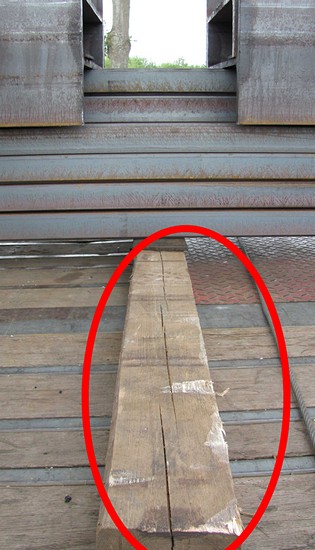 In conclusion, it is fair to say that a great deal of luck was involved. It doesn't bear thinking about what might have happened if a motorcyclist or cyclist had been on the road at the time.

The accident occurred on a road much used for traveling to and from school. Fortunately, this was just another accident with damage to property.