"Pick-up-sticks"
or the importance of protecting yourself! 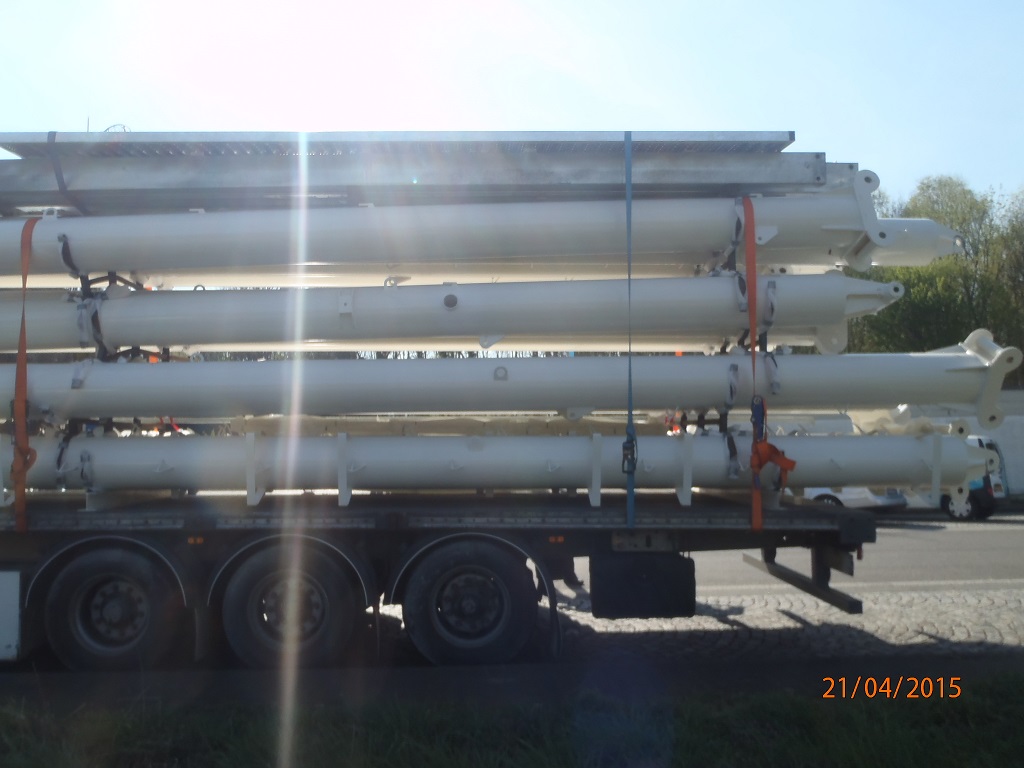 Our Photo of the Month for May 2015 does not, at first glance, appear to be particularly spectacular. The attention of the police was drawn to this vehicle because it reversed off the motorway into the truck stop where the motorway police were based. And because this is not exactly an everyday occurrence, the officers were interested in the truck, and in particular its load. The reason for this strange behavior, reversing off the motorway right in front of the eyes of the police, was that the load had shifted to the left and was clearly straining against the belts. None of this can be seen on Figure 1. 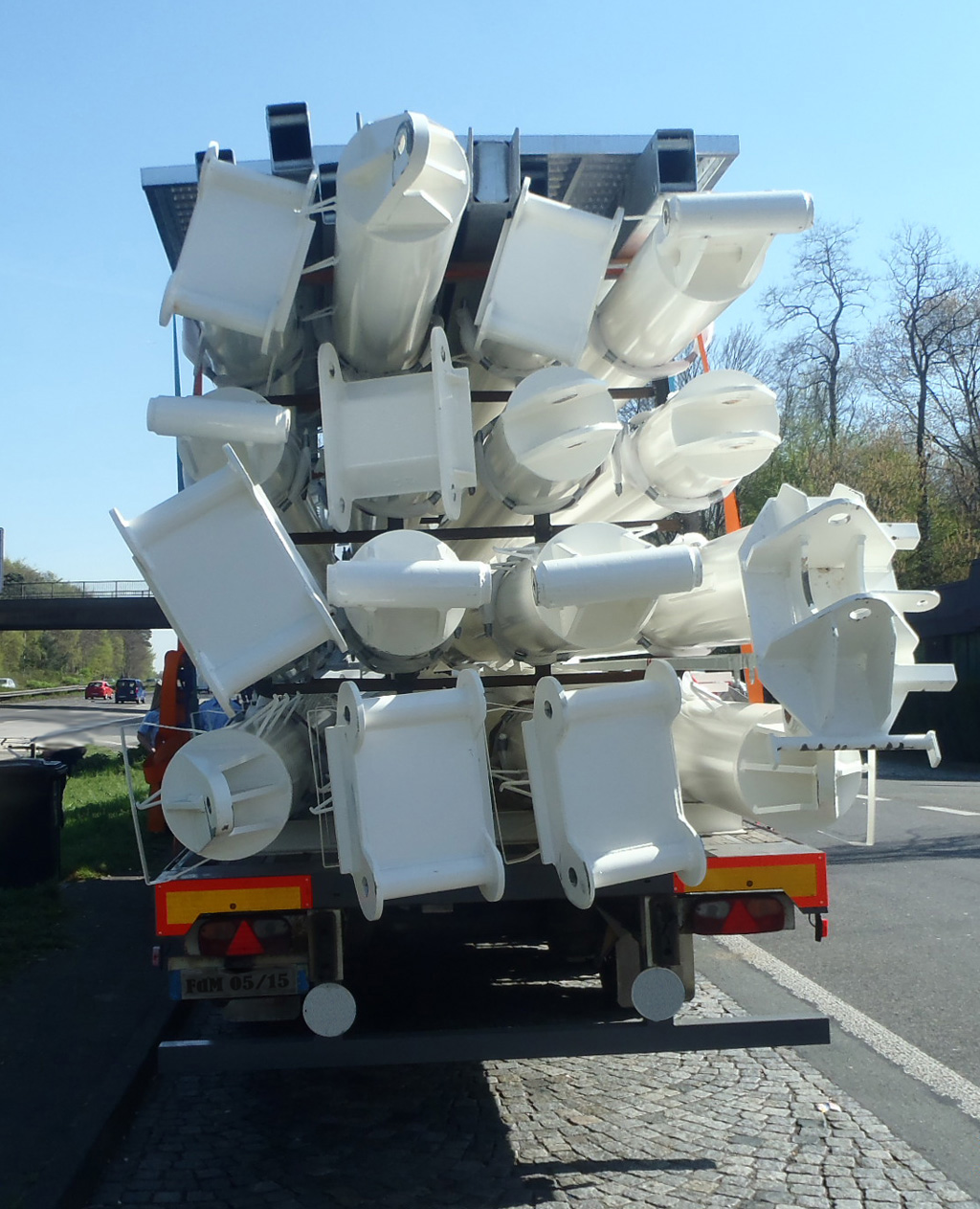 And Figure 2 does not reveal anything else. The load is made up of steel tubes that we understand are used to construct reusable tents or exhibition facilities, or possibly form part of the equipment used in shows. 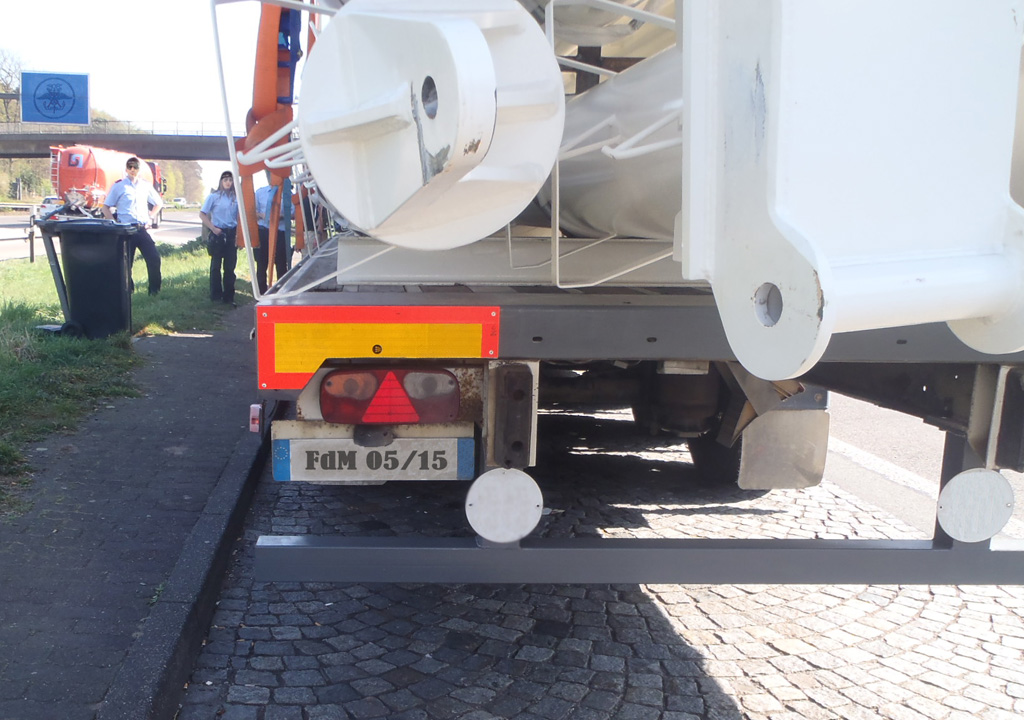 In Figure 3, we want to draw your attention to our three colleagues from the police who are taking an interest in the truck, and in particular to where they are standing. 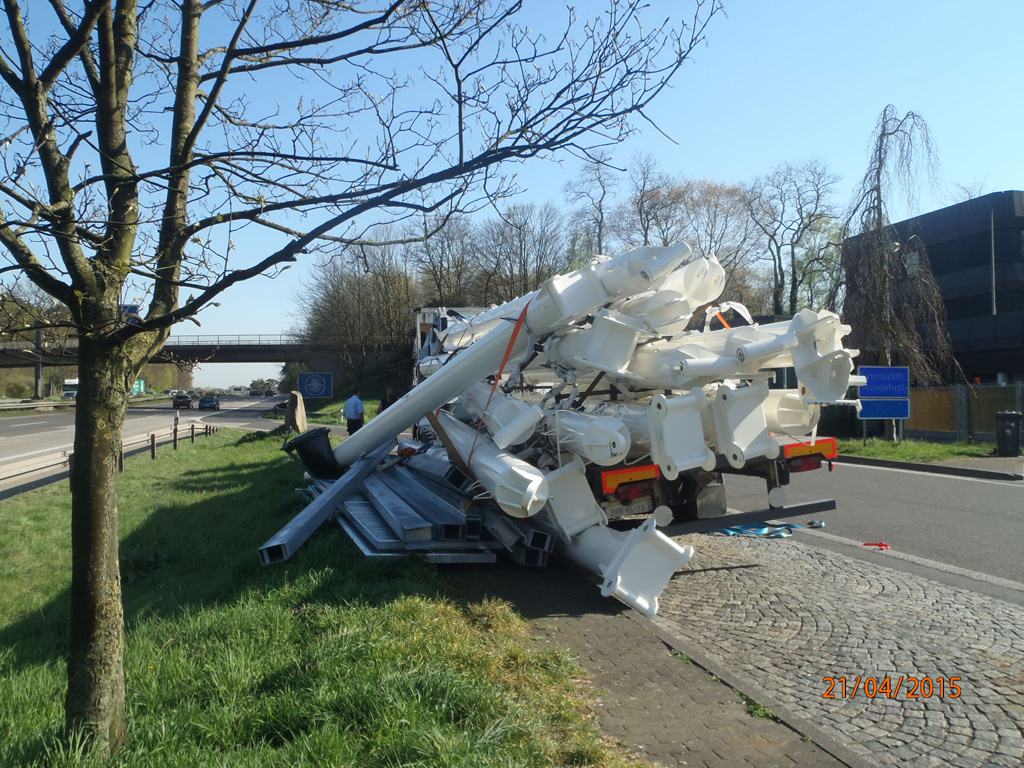 Thank goodness the three officers are no longer where they were standing a few moments earlier. The driver had obviously fully grasped the situation. The load-securing equipment, namely the steel elements between the actual components of the load, had failed, causing the load to slip into the belts to the left. The driver was fully alert to the situation and did absolutely the right thing as soon as he noticed there was something wrong: He got his vehicle off the road. And it is good to see that the officers took an interest in this vehicle, and in particular in the way its load was secured. The dramatic consequences of the thoroughly inadequate way in which this cargo was loaded could probably not be foreseen to begin with. But the resulting scenario illustrates that inadequately secured loads have to be approached with extreme caution and inspected from a distance to assess whether it is safe to get in closer to the danger zone. One's own safety must come first! How on earth can a person approach a load like this, which has clearly tipped to the left (as can be seen in Figure 2)? Obviously, the safe side is the right, or perhaps the left side in front of or behind the load. Of course, it will ultimately be necessary to get close to the load, but not before doing one's utmost to be sure that further inspection can be carried out safely.

But we columnists do not wish to appear as paragons of good sense. It is perfectly possible that our professional curiosity would have made us act in exactly the same way as the officers at the scene. But let this Photo of the Month be a warning to all inspectors, and, of course, drivers and loaders. And we have the perceptiveness of the driver to thank for the fact that nothing worse happened. It is frightful to imagine what might have transpired if the load had been shed into the traffic on the motorway. 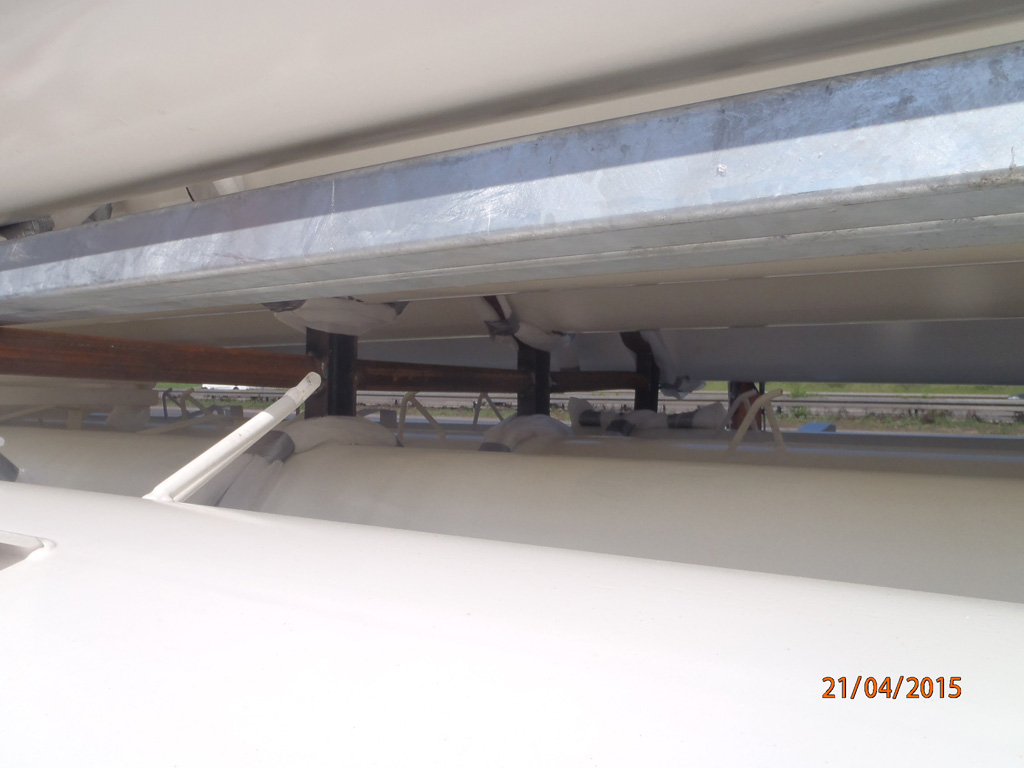 These photos were clearly taken before the cargo unloaded itself. The load shifted as a result of the failure of one of the steel members that were used in this construction. 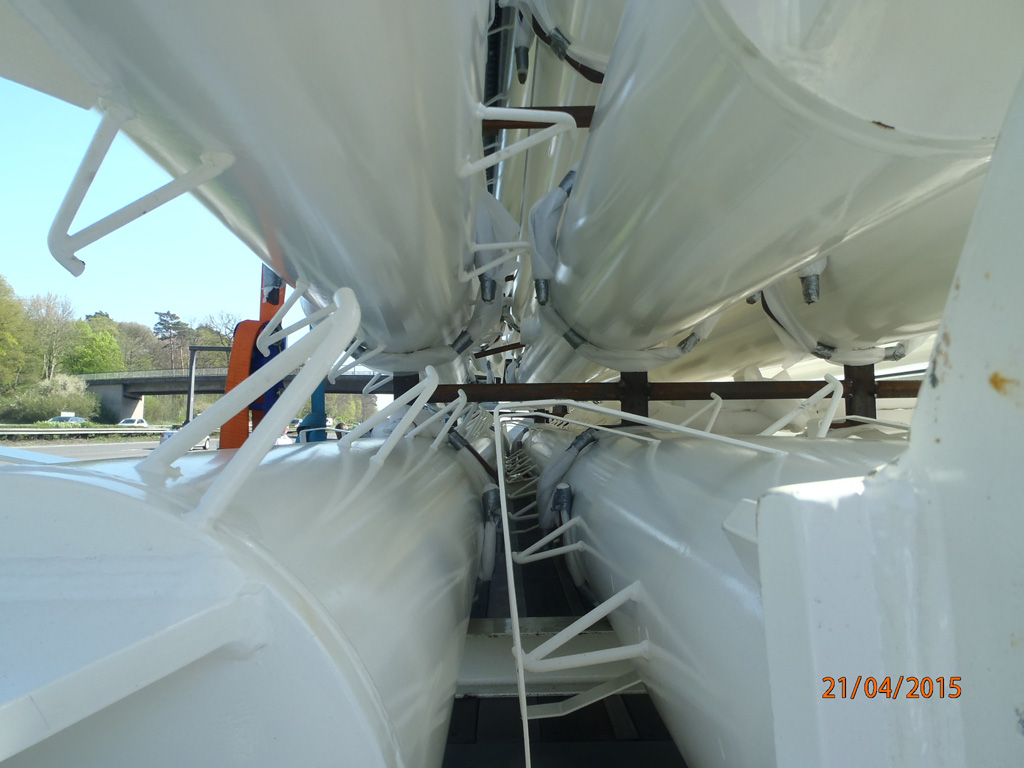 Close study of Figure 6 clearly reveals how this construction was built. Supports have been attached to the top and bottom of a cross-member, and these in turn bear semi-circular cradles. These cradles have been wrapped in plastic to protect the paintwork of the tent poles. The semi-circular cradles extend around the steel tubes to the extent that they overlap. 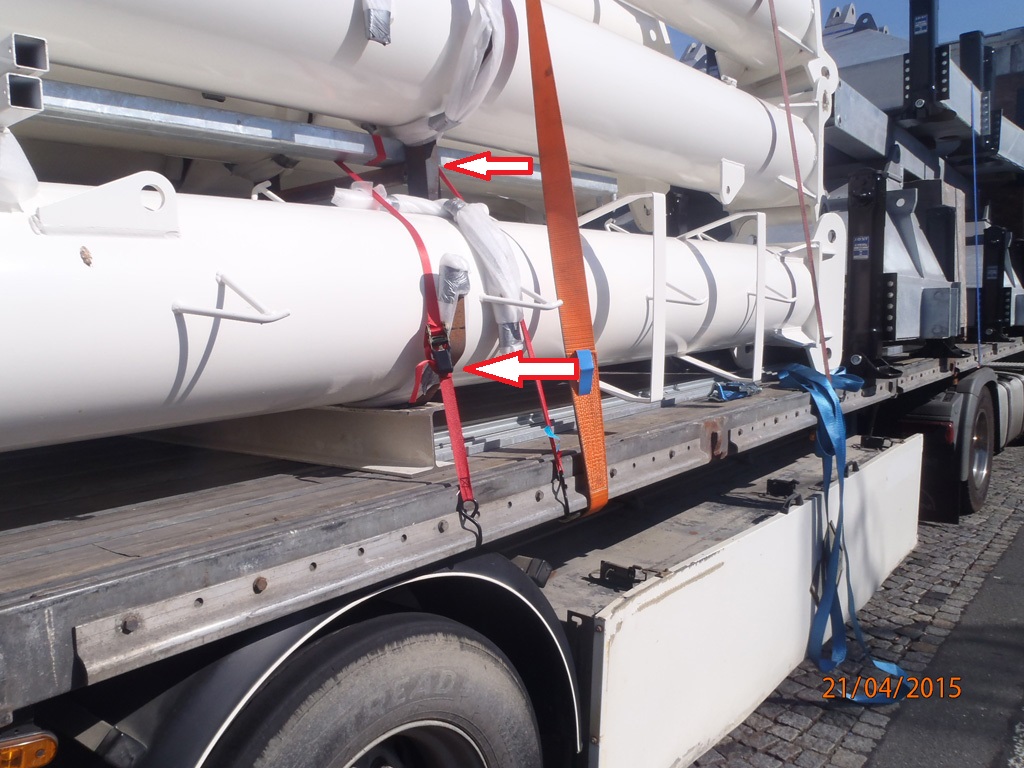 Figure 7 shows the semi-circular cradle, fabricated from rusty steel and clearly attached to the I-beam on the loading bed. If we take a another look at the welding that we can see on Figure 6, it is tempting to refer to a temporary connection rather than a professional welded joint. It is clear that the construction has failed and that the reason for such a lethally dangerous load lies in the inadequate dimensions and the "lousy" workmanship. 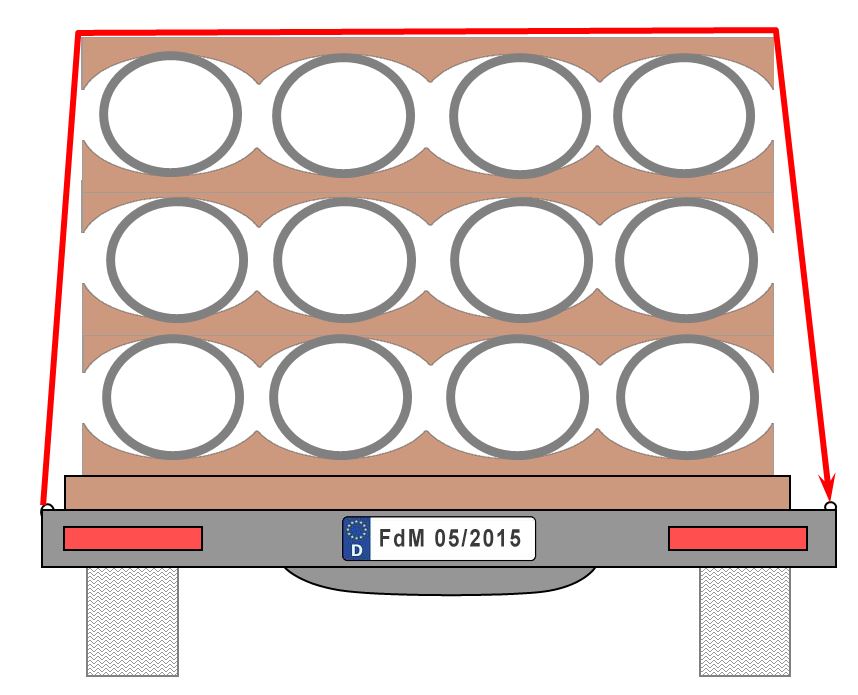 Time and again we speak of the responsibility of the loader in this column. And this example is a clear illustration of that responsibility. As far as we see it, it is the loader that bears the lion's share of the guilt here. After all, we really cannot expect the driver to be able to assess the stability of a steel construction designed to accommodate such a unique load. In our opinion, what is needed here is solid rounded cradles (like those shown in Figure 8) designed and built to safely accommodate these steel tubes, which are clearly intended to be reused. We want to draw your attention to the rather apologetic attempt to secure the load with a belt that may perhaps be suitable for use on a car trailer (see Figure 7), but we shall refrain from further comment. With this month's Photo of the Month, we hope that we have been able to sharpen the awareness of loaders, drivers and inspectors of the dangers they face so that their lives and the lives of others are not put at risk.

The load securing columnists wish you all a safe journey and safe inspection!