Sometimes known as durbar plate, safety plate is textured steel plate generally used as a safe walking surface in engine rooms and large-scale industrial plant and equipment. Sometimes, you will even find safety plate on the beds of transport vehicles. 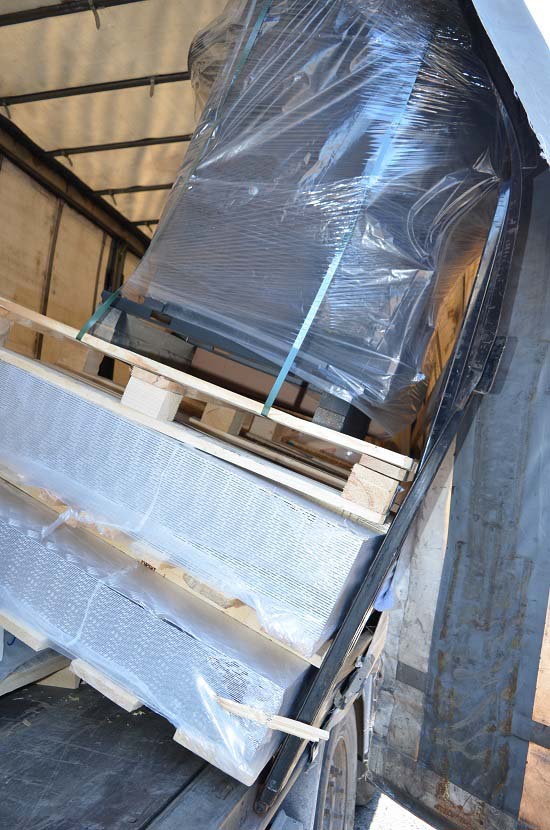 Looking at Figure 1, we can see that some of the packages are new safety plate. The steel plates are neatly bundled and shrink-wrapped to form load units. They are slightly offset from each other and are standing at somewhat of an angle. If we take a closer look at Figure 1, we can see that the stanchion against which the load is leaning is massively deformed. The entire scenario suggests the presence of dynamic forces, and the more we look at the picture, the more we suspect that these dynamic forces have been unleashed. And the hunt for evidence on the asphalt (Figure 2) confirms our impression that we really are dealing with dynamic forces. 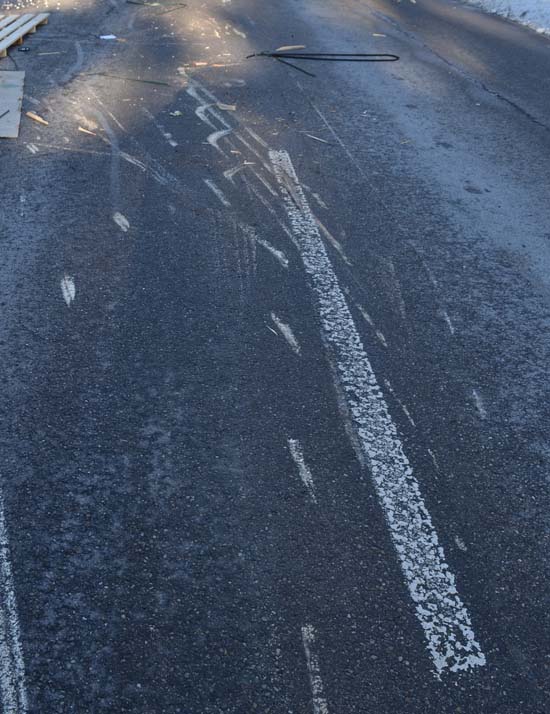 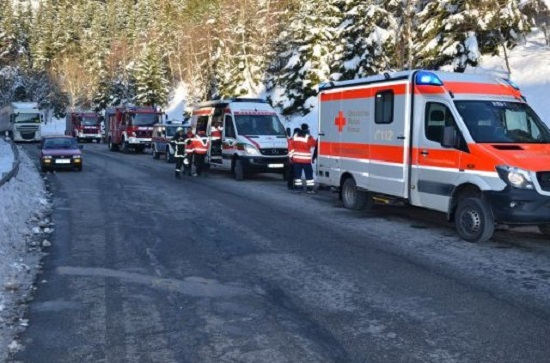 And Figure 3 offers firm proof that something serious has happened. A little about what happened:

An articulated curtainsider truck was negotiating a winding, hilly road in the Black Forest. At this point, the road curved uphill to the right. As suggested by the evidence on the trailer and the asphalt, the dynamic process involved was the load slipping to the left into the tarpaulin of the trailer and bursting through it into the path of the oncoming traffic. 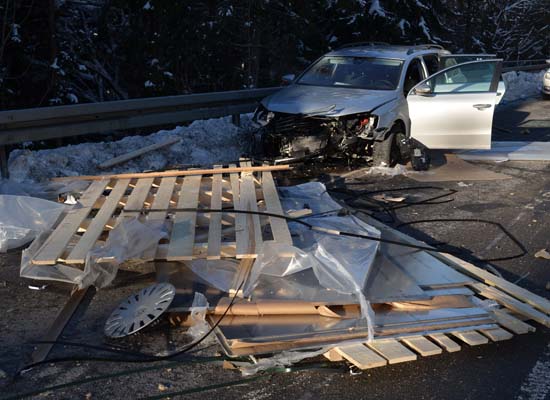 The result was a frontal collision with the oncoming traffic, causing significant damage to several vehicles and, unfortunately, injuries to a number of people. The injured were treated at the scene, and some were taken to hospital for checkups and treatment. The injuries were mostly minor or relatively minor, which is extremely fortunate given the huge potential danger. 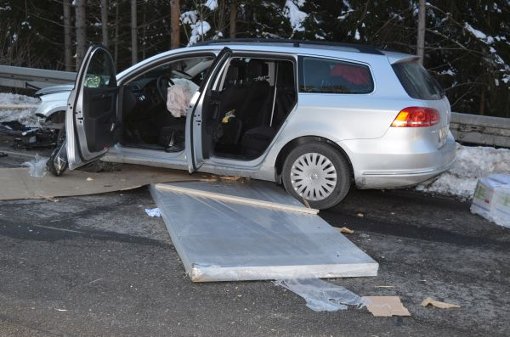 Figure 5 gives an impression of how narrowly a catastrophe was avoided: perhaps by just a second or a fraction of a second.

Forgive us for stressing the potential danger like this, but in this case it was probably a matter of just 100 meters or so that made the difference between whether or not the package of steel sheets hit the road before it hit the front of the car. 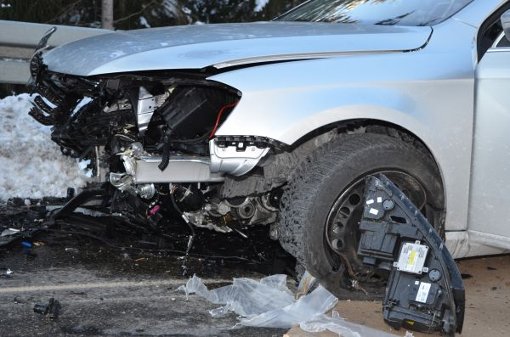 The extent of the damage to the car suggests what might have happened if the load had been lost very slightly later. 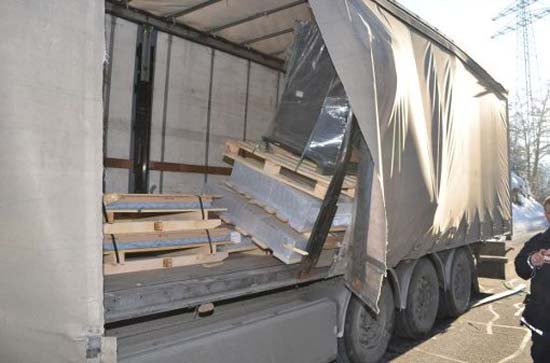 And this picture is all the more appalling when we look at the remainder of the load on the trailer. On none of the pictures available to us were we able to see signs of any anti-slip material or even any load-securing material. Even on the vehicle itself, there is no trace of a torn belt or anything of that kind. And the part of the load that is still on the trailer is clearly only there because it had the good fortune to encounter the stanchion. And because the dynamic process of negotiating an uphill bend was a relatively gentle one, it was not sufficient to throw the remaining load overboard as well.

The realization that this vehicle was carrying not only durbar sheets, but also plain steel sheets and other cargo, none of which was secured in any way whatsoever took our breath away, despite our years of experience as load-securing columnists. What on earth could have possessed any responsible loader to send out an articulated truck with a totally unsecured load? It is patently obvious that the driver had never received any training, and presumably believed that the load was so heavy that it would secure itself. This Photo of the Month is shocking evidence of the catastrophic misjudgment on the part of the driver and the loader.

So how can loads like this be secured well and safely?

The first thing is to have a look at the type of vehicle being used here. Is it a Code L vehicle or a Code XL vehicle? Depending on the load capacity of the end wall, it will be able to provide part or even all of the longitudinal securing force required for the load. In order to do this, it must be possible to load the cargo in a suitable manner while taking account of the load-distribution plan.

Even if regular readers of this column may be tired of hearing us say so, friction is absolutely crucial, and we therefore urgently recommend that anti-slip material should be used both below the load and systematically between the layers of the load. But the following principles must be taken into account: Figure 7 shows the packages of durbar sheet. It also shows that no steel straps have been used to bundle the packages longitudinally. Instead, they are merely shrink-wrapped. If the load is to be secured largely on the basis of friction, then this friction must be passed from the topmost package, through the middle package and down to the bottom package. In this event, steps must be taken to ensure that the friction is not only passed between the pallets and the load, but also between the individual sheets that make up the load. If there is no unbroken friction chain of this kind, any attempt to secure the load in this way will fail if the individual sheets slip forwards. So we have the following basic rule of thumb: When steel sheets are packaged for transportation, they should always be bundled with steel straps in a longitudinal direction to allow the friction to be passed downwards through the entire load unit.

Diagram 7a shows how direct lashings can be passed round the front end of the load to secure it directly against forward movement. (For the sake of clarity, we have not shown these lashings for the second package.) In a scenario such as this, it is important that the load-securing equipment is arranged in such a way that both lashings have the same length. As shown in the diagram, this can be achieved by attaching the lashings to different load-securing points, thus ensuring that their lengths are identical. Because direct lashings only achieve their full load-securing potential when the load slips forward slightly, this means that both belts take up the load at the same time. If one of the belts were shorter than the other, this belt would first be loaded up to its capacity before the second belt. This must be avoided at all costs.

Loop lashings to the sides

Unfortunately, it is not practical to adopt this approach for the load that can be seen at the front in Figure 7. This is because the pallet-like structures on which the load is resting have skids. This means that it is not possible to lay out the belts before the cargo is loaded. In this case, the belts must be painstakingly threaded under the pallets after loading. This means that the ease with which a load can be secured must be taken into account as early as the packaging process. A more intelligent way of packaging such a load would be to use skids that allow a forklift truck access from the sides. This would considerably facilitate load-securing.

Securing to the rear

If the load has been packaged in such a way as to allow it to be secured through friction, this friction alone could be sufficient to secure the load to the rear. Although it is true that securing on the basis of friction alone is not acceptable, the fact that the packages are secured using 4 loop lashings would provide a sufficient tie-down effect as a result of the arrangement of the lashings and their pre-tensioning force. This would attenuate vibrations and oscillations to such an extent that the high level of friction from the anti-slip mats is permanently available. This would take care of securing the load to the rear. If this is not possible, head loops such as those used against forward movement could also be used to secure the load well. 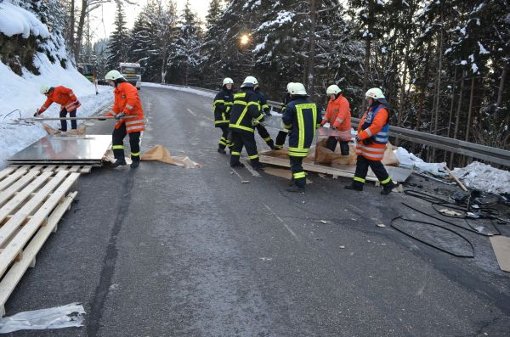 A total of 9 people were injured in this accident. At the time, the damage was estimated at around 100,000 euros, and it took several hours to clear up the scene of the accident, as some of the steel sheets had passed under the crash barrier and slipped into the woods. Special equipment, forklift trucks and so on were necessary to reload the cargo, which we hope was then excellently secured.

We wish you all a safe journey every time!
Your Load Securing Team