The slippery slope to disaster 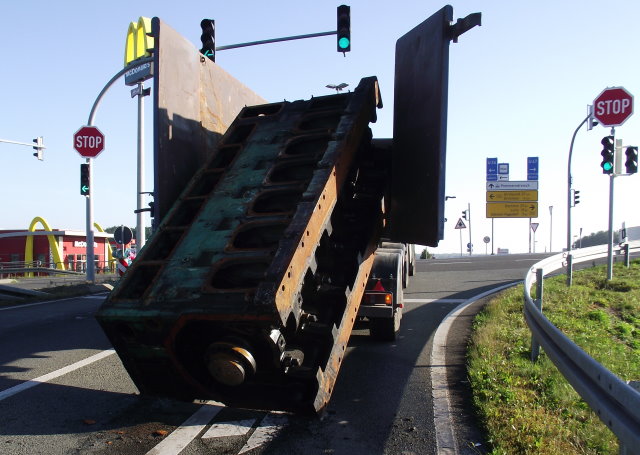 Remember your physics lessons? The greater the inclination of a surface, the faster the rate at which an object will slide down it. This month's photo shows this principle in action. The driver had a very practical demonstration of the effect.

The driver of an articulated truck was transporting two scrap ship's diesel engines. Each of these weighed around 12 tonnes. Although the driver usually transported tank trailers, he had to help out with this trip. The load was declared as "solid steel scrap" in the freight documents. He had not seen the load before he set off.

While he was on the motorway, he noticed that the load was occasionally slipping.

So he left the motorway to have a look and try to make the load safe. He had to stop at a red light at the intersection. At this point, the road was on a slight upward slope, as can be seen in Figure 1.

When he drove off, he heard a short slipping noise and a crash, followed by a dull thud. 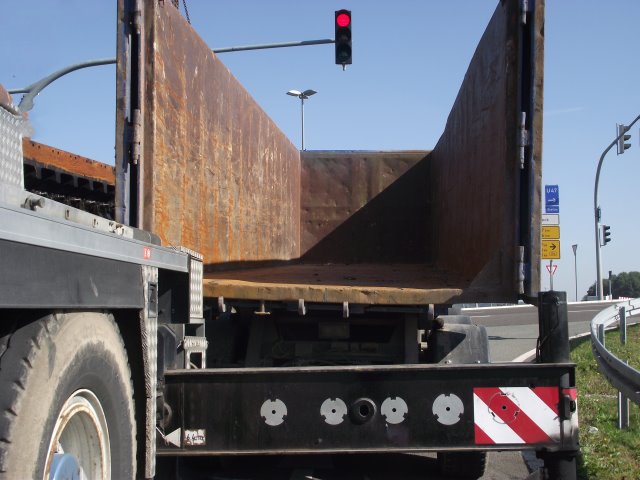 As he drove off, the rear ship's engine slipped against the doors of the container, broke them open and then slipped onto the road, where it left a deep gouge mark.

The two engines have already been removed in Figure 2. A mobile crane had already moved the load to a suitable vehicle, where it could be secured properly.

This figure shows that a roller container had been used to carry the load. There are no lashing points to allow the load to be secured on the rusty steel floor.

The engines were around four meters in length. This means that, when loaded one in front of the other, they only occupied part of the 12-meter loading bed. This made it impossible to load them as a tight fit. In total, the gaps in the load amounted to around four meters.

And there were gaps of around 50 centimeters to the sides.

In other words, there was no tight fit in any direction. The gaps were not filled to prevent the load from slipping. No friction-enhancing materials had been placed under the load. The somewhat greasy engines were thus resting directly on the rusty surface.

As a result, a low coefficient of friction µ of no more than 0.2 was all that was stopping the load from slipping.

As a consequence of this incident, the slip road was closed to allow the lost load to be recovered and loaded on another vehicle. The economic impact on other road users in terms of diversions and missed appointments cannot be accurately assessed, but was undoubtedly not inconsiderable.

Alongside the fines imposed on the driver, the loader and the owner, the driver received penalty points on his German driving license.

The owner also faced costs for the recovery and the repairs to the road.

But how could the load have slipped?

One thing is that the load must be secured against 0.5 g of its weight against the direction of travel. This reflects the underlying physics that forces of 0.5g can arise when a vehicle moves off or negotiates a bend.

But in this case, the low level of friction means that a force of as little as 0.2g is sufficient to cause the load to slip.

And it makes no difference how heavy the load is. Light loads and heavy loads both slip at the same rate at the same levels of friction.

During training courses or vehicle inspections, a driver's response when they are told that a load must be secured to the rear against 0.5g of its weight is often to comment that "I can't accelerate quickly enough to cause the load to slip."

This Photo of the Month clearly demonstrates that this can indeed happen. The mere fact that the vehicle is standing on a slope (inclined plane) generates a downhill force, to which the forces arising as the vehicle moves off are added. Although a total of 0.5g is not exceeded, the forces acting against the direction of travel act more rapidly than on a flat plane. The more steeply a plane or loading surface is inclined, the higher the forces involved.

But there is something we can do to counteract this; something we write about every month, namely secure the load. 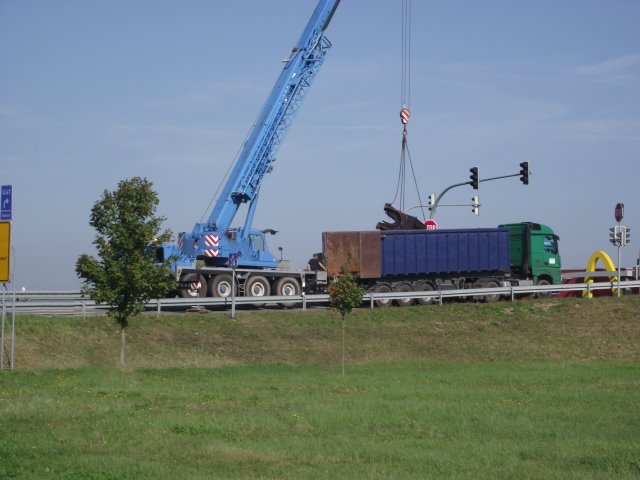 Loads must always be transported in such a way that they are secured against any forces that arise.

The first prerequisite is a suitable vehicle. This means that the vehicle used must be capable of transporting the load safely. The vehicle must either have sufficiently strong walls and the cargo must be able to be loaded as a tight fit, or it must be fitted with lashing points to allow the cargo to be secured firmly to the loading surface to prevent it from moving.

The second prerequisite is a clean loading surface combined with additional friction-enhancing materials that can be placed between the cargo and the loading bed. if these prerequisites are met, the load can easily be secured with tie-down lashings.

If these simple rules are followed, ensuring a safe journey with a secure load is a straightforward matter.

And perhaps those physics lessons were not a waste of time after all!

We wish you all a safe journey every time!