This month, we want to do something different, namely to explicitly praise the way in which a load has been secured and to discover hidden reserves in tie-down lashings. Before regular readers of this column indignantly point out that load-securing measures do not have to be designed to cope with accidents of this magnitude, let us immediately put your minds at rest. The accident depicted here simply gives us the opportunity to express our praise and to have a close look at the hidden reserves that can be found. It is, of course, correct that load-securing measures only need to cope with the accelerations given in the relevant standards and guidelines, namely 0.8 g to the front, 0.5 g to the sides and 0.5 g to the rear. 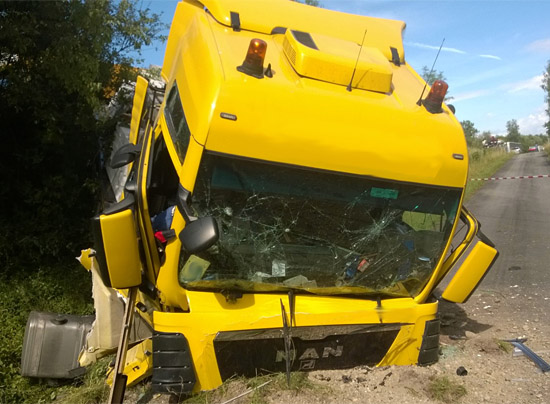 There are plenty of people out there (and we do not entirely exclude ourselves) who generally take a hard line on tie-down lashings. Although they are easy to attach, their effect relies entirely on the force applied in pre-tensioning the belts with muscle-power alone. And that, we like to think, is the end of the story. Of course, that is correct if you stick to the letter of the relevant standards and guidelines. But the more one thinks about the issues involved, the more it becomes clear that there is more to a tie-down lashing than the securing effect that results from the pre-tensioning force that is applied to it. 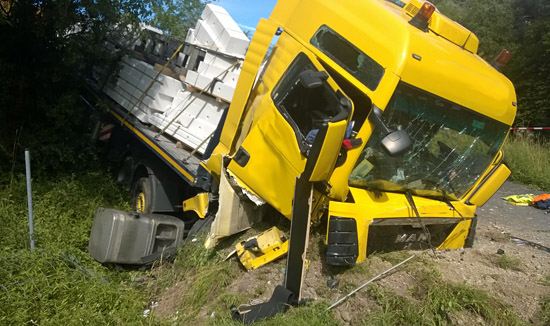 Not that we want to give the impression that we do not regard the pre-tensioning force in a tie-down lashing as being useful and important. On the contrary, it is a crucial aspect of tie-down lashings and vital if they are to work properly. Figure 2 gives an impression of the acceleration forces that must have acted on the vehicle. We don't even want to try to guess at the g-forces at play here, but there is no doubt that they were many times greater than the 0.8 g for which load-securing measures are usually designed. Another thing that can be clearly seen in Figure 2 is the fact that the belts are at an angle. 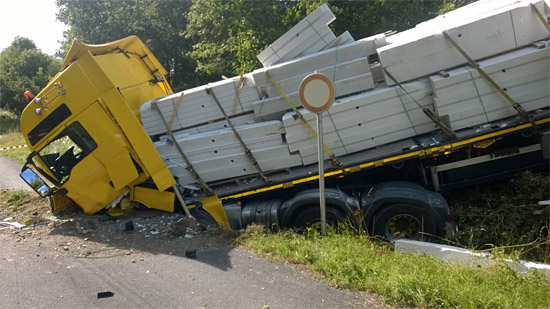 The truck is clearly carrying a full load of aerated concrete blocks or construction components. Unfortunately, we do not know the weight of the load, and we do not intend to discuss the cause of the accident. We want to concentrate exclusively on the tie-down lashings.

Each load unit was secured with two tie-down lashings. As far as we can judge from the pictures, long-lever ratchet handles were used. Despite the severity of the accident, many of the belts still show that a number of different measures had been taken to protect the load from the belts. The tidiness around the loading area appears to be exemplary. All the loose ends of the belts were neatly rolled up and attached to the vehicle or the load securing equipment itself with cable ties.

So what happened? After the vehicle had left the road and dug into the ground, the load must have been subjected to a considerable acceleration force to the front. The load slipped and the belts also slipped forwards with the load. At the front, the belts are inclined by up to 20 ° and at the rear by up to 33 °. The pre-tensioning force increased dramatically as the load slipped. This can clearly be seen on the fifth belt from the front, on the top of the load. In this case, the pre-tensioning force of the belt became so great that the belt worked its way into the aerated concrete after the edge protector had been lost (it is also possible that no protector was present in the first place).

In addition to this huge increase in pre-tensioning force, which can load the belts to their lashing capacity or even slightly beyond, there is a further effect, namely the direct lashing effect. Although this may appear to be a contradiction at first glance, it is actually logical. This direct-securing effect is caused by the fact that the belts themselves have a considerable friction bond with the load. It is this friction that caused the belts to slip with the load up to an inclination of 20 ° at the front of the vehicle and 33 ° at the rear of the vehicle. The fact that some of the belts have slipped from the load completely clearly shows that the belts also slipped across the load or the load slipped under the belts. But those belts that are still in position across the load have an immense pre-tensioning force, and the good friction bond with the load is still intact.

The friction between the load-securing equipment and the load itself acts as a securing point. The result is a kind of direct lashing. This "securing point" causes the belt to slip forwards under load. Each centimeter that the belt slips forwards increases its inclination compared with its initial vertical position. And each additional degree of inclination increases the direct lashing effect of the tie-down lashing. Only in this particular case do we see that some of the belts worked into the load, causing them to act as real direct lashings. We probably have to put it down to a fortuitous accident that the fourth belt from the front slipped from its load block and now appears to be acting as a direct lashing on the third load block. 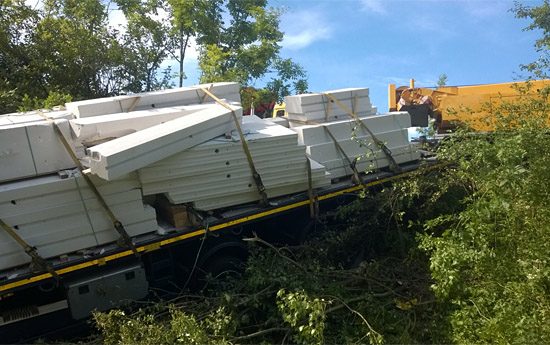 That the driver escaped this accident with his life is due not only to the direct-securing effect and the dramatic increase in the tie-down lashing effect caused by the rise in pre-tensioning force, but also to the fact that, according to our information, lateral stanchions had also been used on this vehicle. These stanchions are probably located in the vicinity of the lateral wooden beams on the loading bed. These lateral beams are either secured to the loading surface or are positioned in front of the stanchions, and thus helped to ensure that the part of the load at the rear of the vehicle was unable to exert its full force against the end wall.

Professor Kaps described the direct-securing effect of tie-down lashings exhaustively in his article "The facts". In reality, this direct-securing effect arises not only with the high levels of friction we see here, but also when the belts are inclined by as little as 1 ° to 3 °. At first glance, it may appear strange to talk about movement of the load in the context of tie-down lashings, as the whole point of such lashings is to prevent the load from moving. But in reality virtually all loads move on the loading surface or exhibit some movement within themselves, even if such movement is restricted to just a few millimeters. Movements of the load such as this are unproblematic and are fully accepted, for instance in the context of direct securing. Movements of the load (often tens of centimeters) that are necessary for direct securing to take proper effect are not even mentioned in any of the guidelines, let alone taken into account in calculations. So it is only right and proper to allow tie-down lashings a certain latitude in respect of movement.

This Photo of the Month shows the potentially life-saving significance of this direct-securing effect.

To absolutely preclude any misunderstanding, we want to stress that our digression about the hidden reserves of tie-down lashings should under no circumstances be understood as a defense of sloppiness or a call to ignore the applicable standards and guidelines. On the contrary! But getting to grips with the friction between the load-securing equipment and the load itself can expand one's horizons a little and promotes understanding of the extremely complex processes involved in load securing.

Your load securing columnists wish you a merry Christmas and a happy, healthy and safe 2015.