Once again, some people standing at traffic signals in a city can count themselves very lucky. This vehicle pulled away from traffic signals at a motorway slip road, where it is unusual to find pedestrians waiting, and turned the corner. Having just pulled away, the vehicle would still have been moving slowly when it turned. While it was turning, the trailer started to sway, causing the load to break free and "escape" from the trailer while still maintaining its original speed and direction.

Again, this case illustrates the importance of training in load securing for loading personnel and the drivers themselves. Fundamental errors were made, and we shall use the pictures to discuss these below. 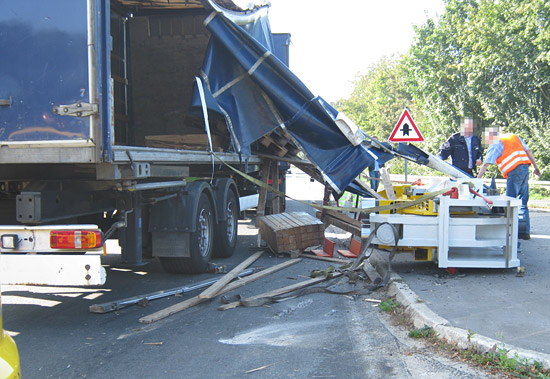 The damage to the curb gives an idea of the forces that are unleashed when a truck sheds a load of solid steel plates such as this. The load itself is made up of metal milling machines, or at least the housings and some of the ancillary attachments. The freight documents showed a weight of 10.5 tonnes and the recovery crane registered a weight of 7.9 tonnes. 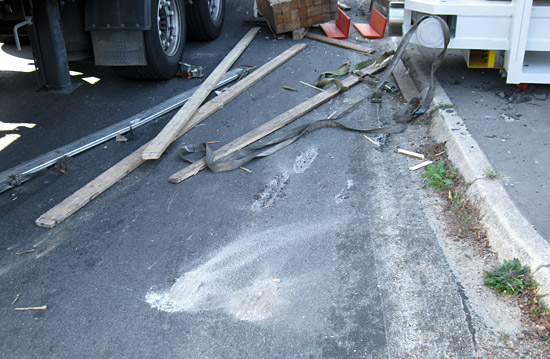 We have been very fortunate with this Photo of the Month because the truck itself was carrying a load virtually identical to that of the trailer, and this gives us a very good insight into how the load was stowed and secured. Because this solid steel assembly had sensitive components attached to the bottom, the load had to be placed on wooden cradles. 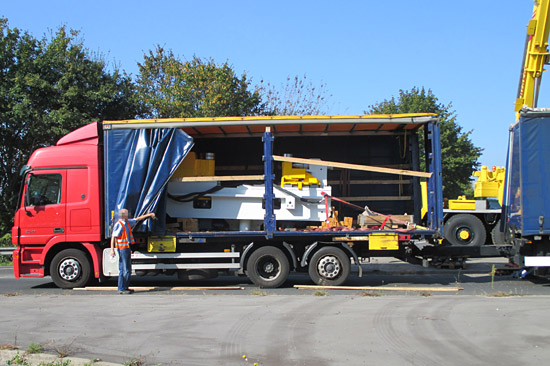 The view from the side in Figure 3 clearly shows that these cradles, which were made from several squared lumber elements (8 cm x 8 cm), had already disintegrated. The position of the load reveals that it slid on the front wooden frame, almost completely destroying it, and also tipped the rear frame over, again almost completely breaking it up. This accident is solely due to poor load securing, and the reason is plain to see in this photograph: It appears extremely likely that the belt was simply looped through a single load-securing point on the load. This meant that the load was free to slip on the belt like a pendant on a necklace. 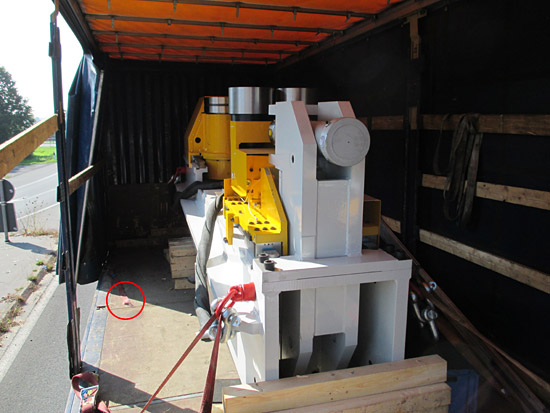 This picture gives a clear impression of the solid steel construction of the milling machine. It can also be clearly seen that the belts were simply passed through the lifting points on the right and left. A torn belt that can be seen on the front left of the loading surface suggests that the load was "secured" in the same manner at the front, but that the belt failed. 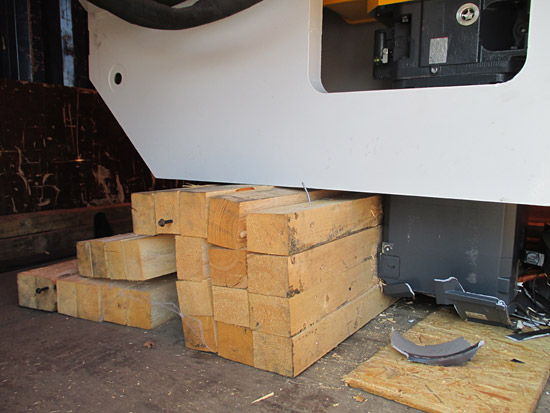 Figure 5 shows the destroyed front support. "Cradle" is the term generally used for storage frames and supports that have been cut to suit the load, allowing it to be safely placed and secured on a loading surface. 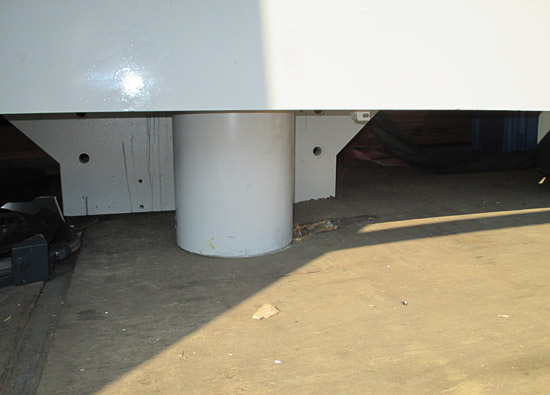 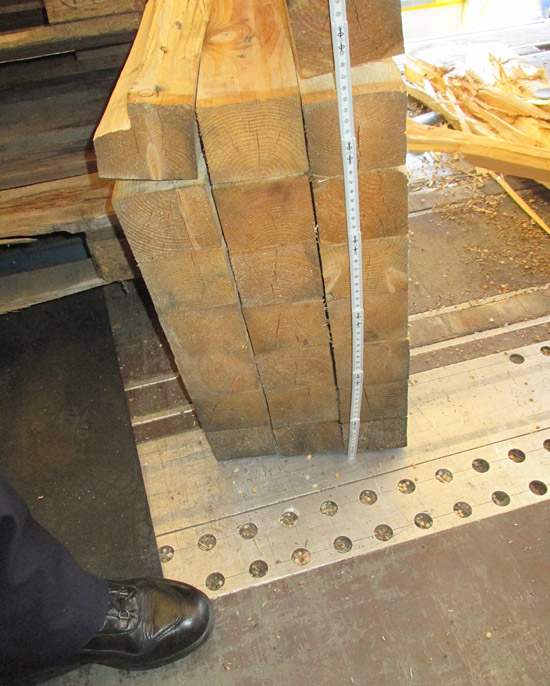 Figure 7 clearly shows one of the wooden supports on which the load was resting. They are 90 cm wide, approximately 64 cm high and 30 cm deep. The dimensions alone indicate that the wooden supports are extremely susceptible to tipping. Because the supports are liable to tip longitudinally, one would intuitively assume that a bending load that could lead to failure would result from longitudinal loading, for instance due to braking. 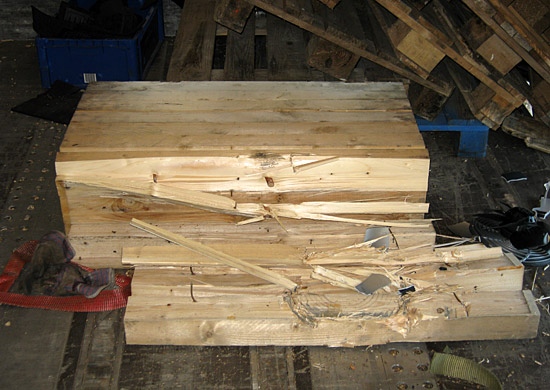 And so it is: Figure 8 reveals that the load moved longitudinally and that the support, which was held together with 13 cm nails, was not able to withstand this acceleration. This figure offers evidence that there is a certain irony in the laws of physics. Looking closely at the picture, we can see that anti-slip mats had been used under the supports. In other words, the wooden supports had an extremely good friction bond with the loading surface. This meant that the base almost inevitably remained stationary, while the rest of the support broke apart across the top of its own base.

To immediately head off criticism from attentive readers, we can, of course, confirm that it is in no way the purpose of a support to absorb longitudinal acceleration or any other acceleration. Its sole purpose is, of course, to take the weight of the load and distribute it over the loading surface in a sensible way. 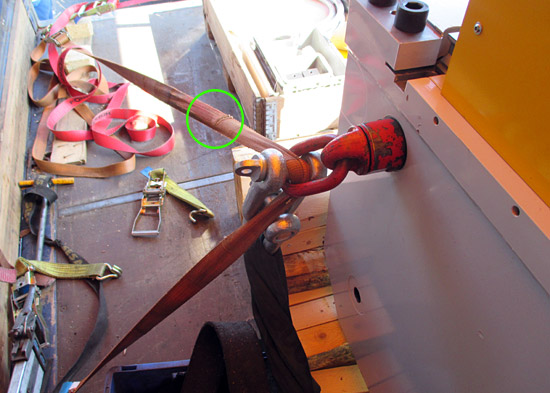 When a load is liable to tip, as is the case here, it must be secured with direct lashings. The load-securing columnists in this office can simply not imagine securing a load such as this with tie-down lashings alone. 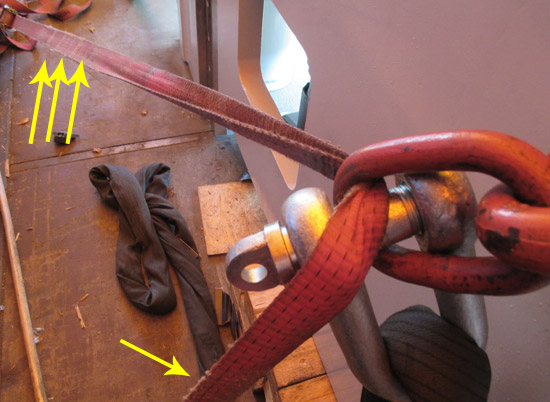 The belt was also passed through another securing point. This time, however, it was not passed over the pin of the shackle, but was passed more or less directly through the eye of the load-securing point. This clearly illustrates how the belt is constricted. It is easy to imagine how the warp yarns gradually snap from the outside to the inside and the belt ultimately loses all its strength. Furthermore, this belt has already been damaged at several points (see arrows) to such an extent that one has to ask whether the loader or the carrier ever even bothered to think about load securing and the value of the load. 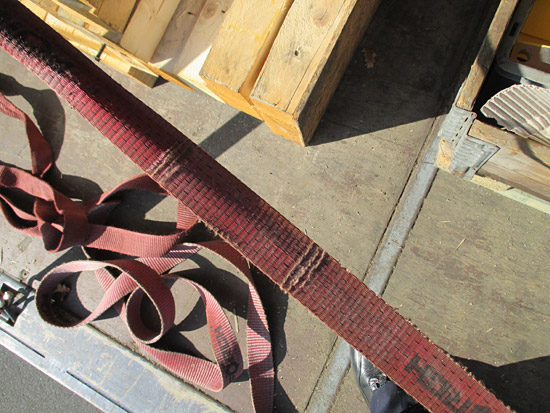 Figure 11 shows another location that indicates that this vehicle is often used for transporting loads with sharp edges, probably steel components or steel sheets, because the belts are in a lamentable condition, to say the least. 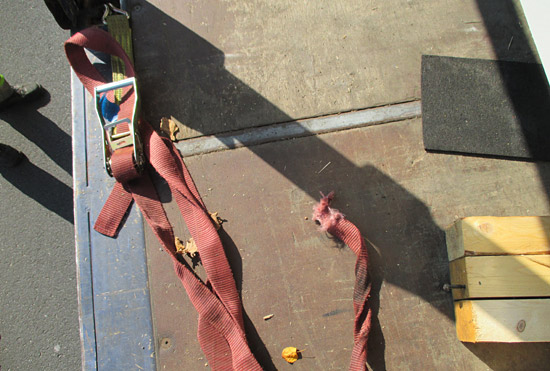 Belts failed on both the truck and the trailer. The photo clearly shows that the belt is completely overloaded and has torn through, probably at a point where it had previously been damaged. Of course, the reason for this is not just the damage that the belt had already suffered, but rather the desperately poor way in which load-securing had been conceived and carried out. 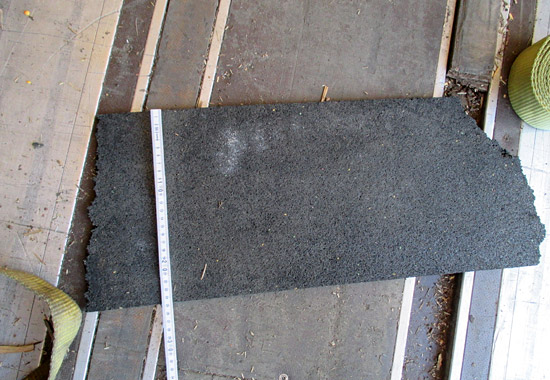 Anti-slip material had been used under the wooden supports, and this is always to be welcomed. But in this particular case, with this type of load, friction was of less significance, and we shall explain why when we make our recommendation for securing the load.

Recommendation for securing the load

In terms of load-securing, this load is somewhat of a gem: The susceptibility of the load to tipping has to be considered in several different degrees of freedom and all aspects of securing need to be thoroughly thought-out. The shape of the load itself on its supports meant that it was already liable to tip or at least only marginally stable. The geometry of the supports meant that the load was extremely susceptible to tipping longitudinally. You only have to look to see that a contact surface for each support of just 30 cm compared with a height of around 65 cm is a pretty unstable construction.

The load must be secured with direct lashings in all directions. To be on the safe side when discussing securing, we shall use the weight of the load given in the freight documents, namely 10.5 tonnes. 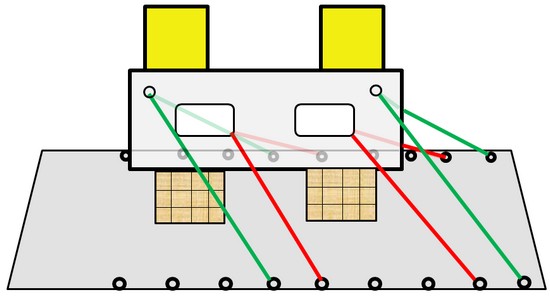 In a longitudinal direction, it is necessary either to attach two pairs of direct lashings (preferably of the same length) to the load-securing points or to pass two loop lashings through the two recesses in the milling machine (provided that the accessories attached to the machine permit this). These two loop lashings must be tensioned to the rear at the same angle.

Edge protection is crucial here, as is the quality of the belts, which must be in perfect condition. Four individual belts would provide 4 x 2,000 daN securing force (with a small reduction for the angles). Provided that the angles are the same, the two loop lashings would have the same securing effect.

According to DIN EN 12 195-1:2011 (and VDI 2700 Part 2 of July 2014), 6,300 daN of securing force is needed to secure the load to the sides. This could be achieved with four individual belts on each side or with two belts on each side attached to the load-securing point with a hook and a triangle.

These load-securing points should be as close together as possible to ensure that the securing force really acts to the side. Because the load is liable to tip in several directions, two loop lashings should also be passed through the milling machine to secure it against movement to the rear. If this is not possible, two lashing belts must be used on each side to prevent the milling machine from moving backwards.

A high level of friction is always good when securing a load and saves a considerable amount of effort with direct lashings and particularly with tie-down lashings. In this case, however, the fact that the load is liable to tip in several directions means that friction is of less significance. If something is unstable, it will fall over, and friction is powerless to prevent it. Because the load in this case is effectively "balancing" on the cradle, it must be held in place by direct lashings. Designing the direct lashings so that there is plenty of capacity to spare can only help to reduce movement as much as possible.

The big disadvantage of direct lashings is that they only take effect when the load moves a little to allow the securing equipment to generate securing/lashing force. It makes sense to keep the pre-tensioning forces as high as possible (not more than 50 % of the LC), as the load on the front belt decreases and the load on the rear belt is doubled if the cargo moves forward by just 1 cm. The principle is illustrated by an example using a simple pair of scales: If you remove a weight from one pan of a pair of scales, the scales will clearly tilt. The movement will be twice as large if the weight is then placed in the opposite pan. A similar principle applies to direct lashings that are attached to the front and rear and pre-tensioned to the same degree. The pre-tensioning limit is therefore 50 % in order to ensure that the front lashing element is not loaded at all if the rear lashing element is loaded to 100 % of its LC. This is the only way of providing the greatest possible securing effect.

Also, although the articulated lashing points can be used multiple times, they should only ever be loaded in one direction. This is because under load they would first have to turn towards the direction of the force and this movement would significantly decrease the pre-tensioning force in the lashing equipment. With a construction as unstable as this one, this loss of pre-tensioning force could be sufficient to cause the supports that make up the cradle to tip.

It undoubtedly goes without saying, but we shall do so nevertheless: 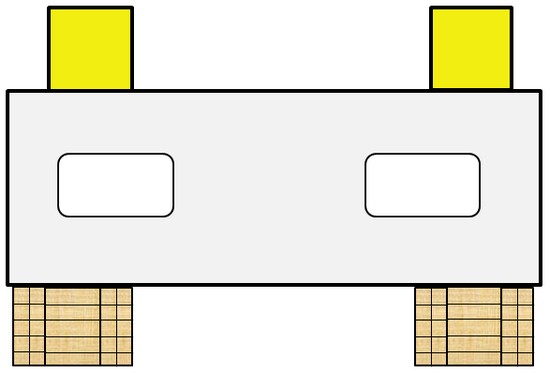 The supporting structure can be built to be stronger and with more sensible dimensions. A few cross-beams could have been used to make the structure into a rectangle, which would have eliminated the risk of it tipping longitudinally. Additionally securing the cradle itself using tie-down lashings and/or direct lashings always remains an option. And in the scenario discussed here, additionally securing the cradle in the direction of travel and against the direction of travel would have helped considerably.