During a routine inspection of a truck in Switzerland, the police were rather mystified when they tried to have a look at the load securing arrangements. They were conspicuous by their absence. The driver set off, firm in the belief that the quartz slate flooring slabs were adequately secured thanks to their sheer weight and the plastic straps.

The entire load was made up of quartz slate slabs of different thicknesses with a total weight of 23.6 tonnes. Some of the load units were extremely well packed, i.e. the slabs were flush with the edges of the pallet on all sides. Other pallets, on the other hand merely served to allow the slabs to be picked up with a forklift truck, and on some, the slabs were considerably smaller than the pallet, with the result that gaps in the load were inevitable. 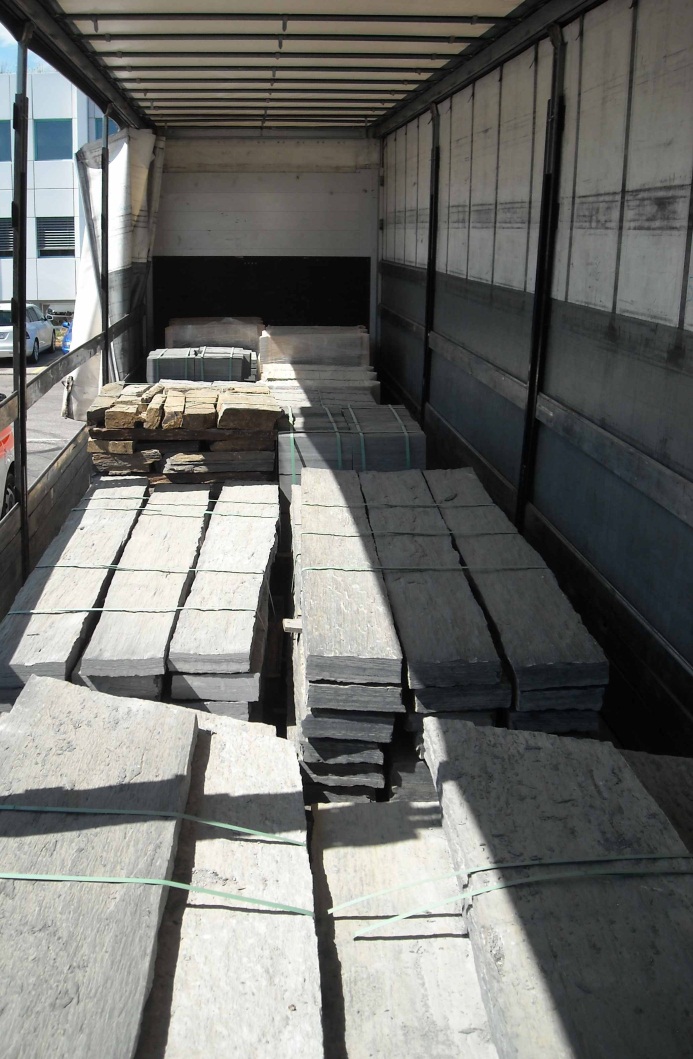 Figure 1 shows an overview of the load. At the front, the pallets fit tight against the end wall and against each other. There are sometimes considerable gaps between the pallets at the back both in a longitudinal and lateral direction. 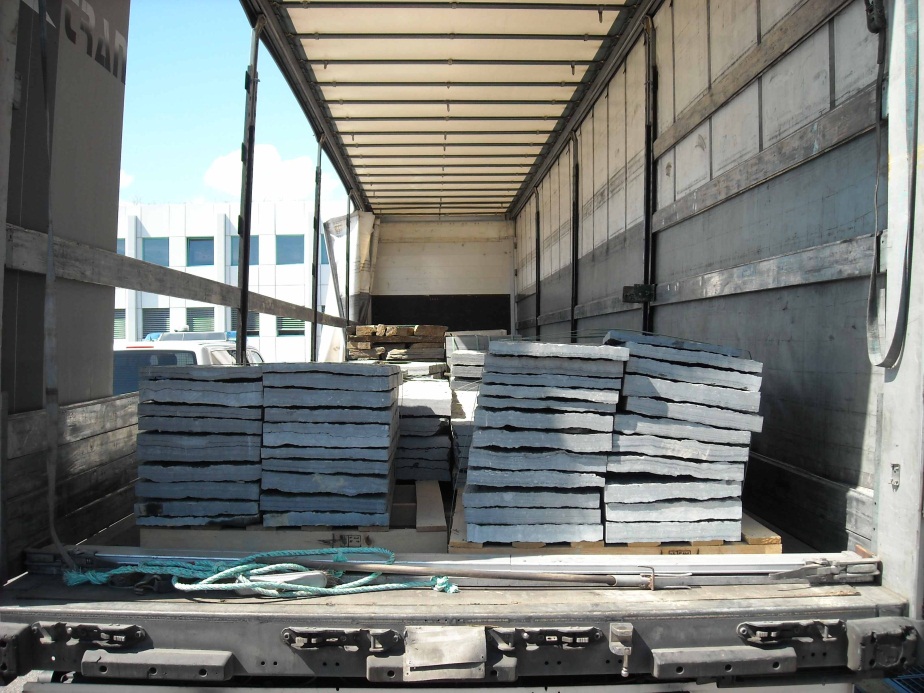 Last month, we took a good look at the question of packaging itself. And this month, the formation of load units plays the same role as packaging did last month. As the name implies, a load unit is designed to bundle a load together to form a unit. Wherever possible, the unit should be compact and capable of being stacked if this is required. It should render the load capable of being stowed and secured. Figure 2 clearly shows how neatly those concerned attempted to stack the slabs. And in the case of the load unit on the left of the picture, their attempts were successful. With the unit on the right, however, the structure of the material made things rather more difficult. Because the pallets are single-use pallets, we fail to understand why these pallets are so much wider than the load they are carrying, as it appears that the slabs in the load are a standard size. If this load is to be loaded and stowed easily, the edges of the pallets should be flush with the load in order to allow the load and the pallets to be placed tightly against each other. Figure 2 is a perfect example of how good, simple and safe loading is rendered worthless by the poor load units and the resulting gaps in the load.

Allow us to digress a little and talk about the product. 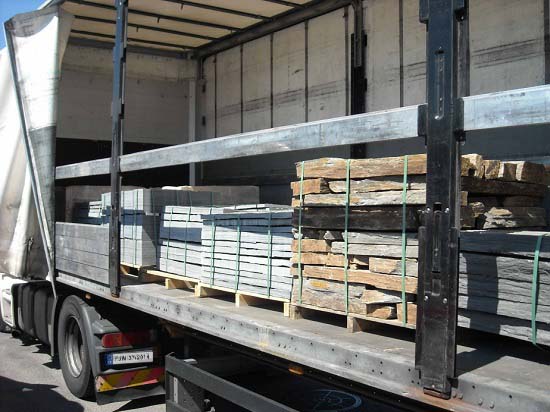 At the front of the vehicle, most of the pallets have been packed neatly. The load is flush with the pallet and it appears that it has also been possible to stow the load as a tight fit lengthwise. This is the only way that a stable end wall can be exploited to secure the load. 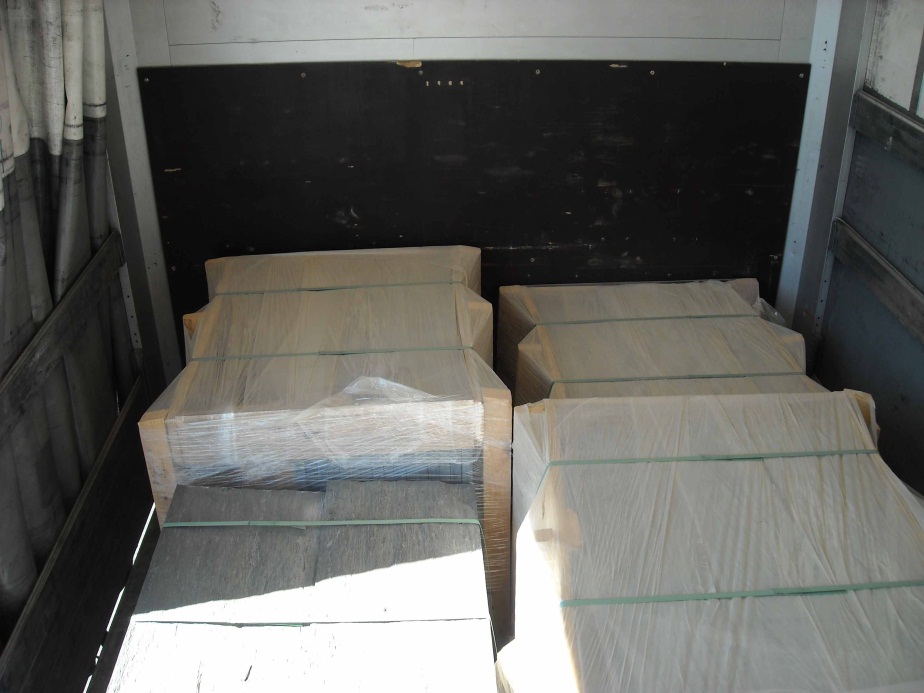 A sort of crate has been built around three of the four pallets as can be seen in Figure 3. These three pallets have also been wrapped with plastic film. Even though considerable care was taken with this packaging, problems still arise when securing the load as a result of the gaps that remain between the pallets. 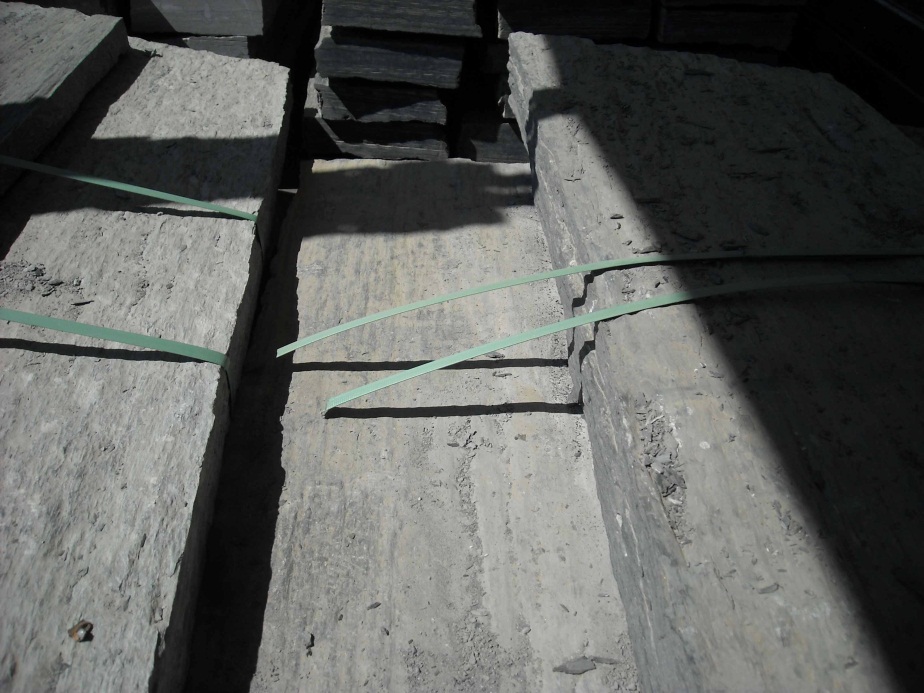 A load unit is called a load unit because it is intended to bundle a load together to form a unit. But precisely what is meant by that is subject to a considerable amount of interpretation. It would make sense if the strapping was able to survive the entire trip on the intended means of transport rather than just hold the load together while it is being moved with a forklift truck. On Figure 4 we can clearly see that two of the plastic straps have already been cut through by the sharp edges of the slate slabs. The following principles apply: The weaker the strapping, the more effort needs to be put into securing the load, because the load securing measures also need to do the job of forming load units if the cargo is being transported more or less loose on pallets. In the case of long products such as these, this could easily be achieved with two pairs of loop lashings from the left and right. But we have to ask the question whether it would not be better to use suitable strapping for the product in the first place when dealing with such heavy loads with sharp edges. This would have two advantages:

1. The goods would be better protected against external influences.

2. It would be far easier to secure the load. 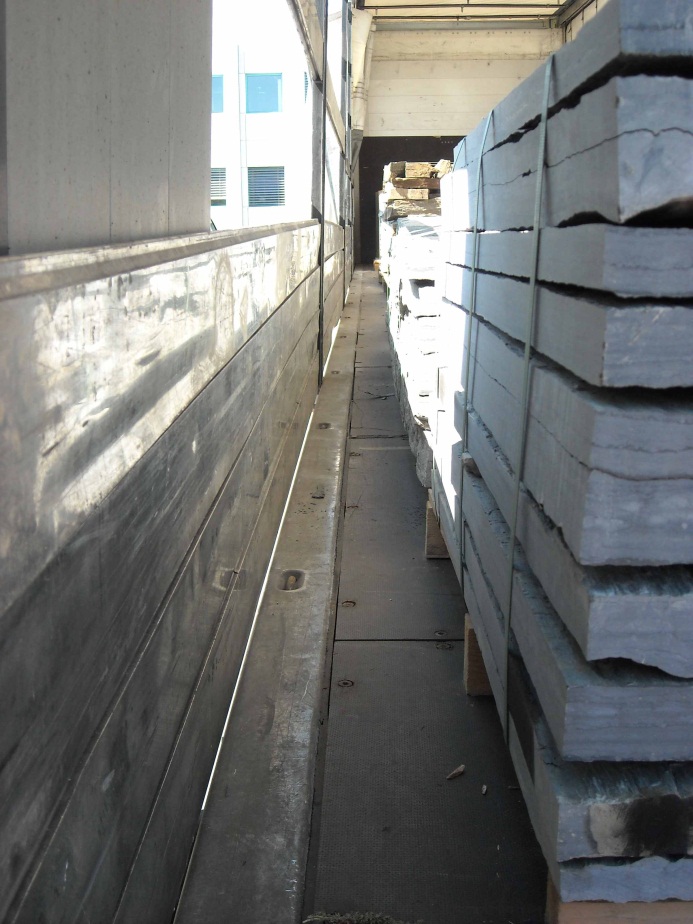 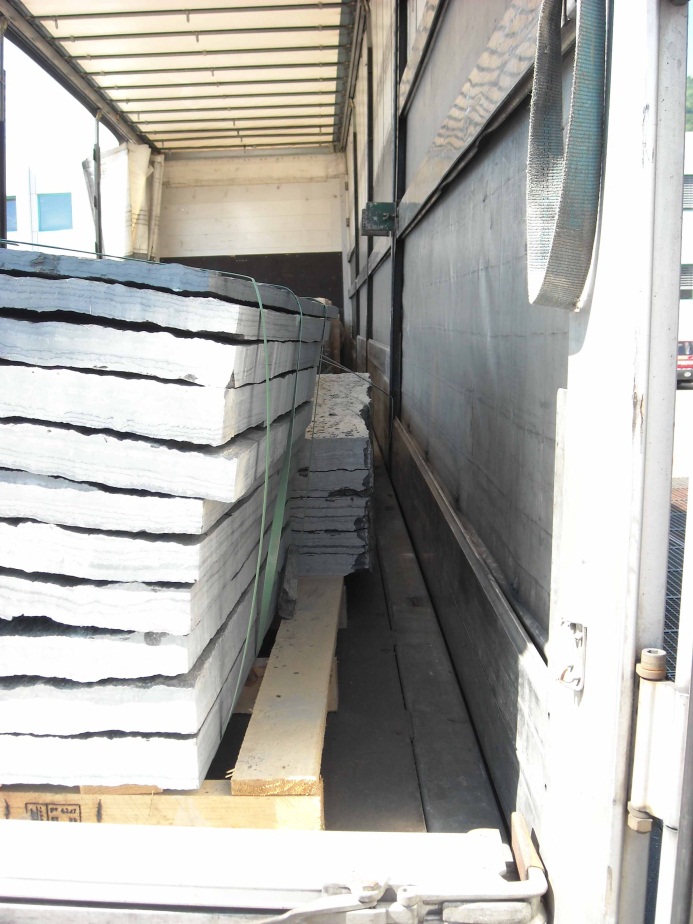 Figures 5 and 6 show the loading gaps on the left and right of the vehicle. We have already mentioned that the driver was of the opinion that the load was adequately secured by its own weight, and possibly by the way in which it had been loaded. And as a result, he was unconcerned by these considerable gaps in the load. If the cargo had been subjected to a load, some or all of it may well have slipped to one side, burst through the aluminum slats and the tarpaulin and dropped onto the road. Even if the bodywork had survived this onslaught, the shift in the weight distribution would almost certainly have had dire consequences. 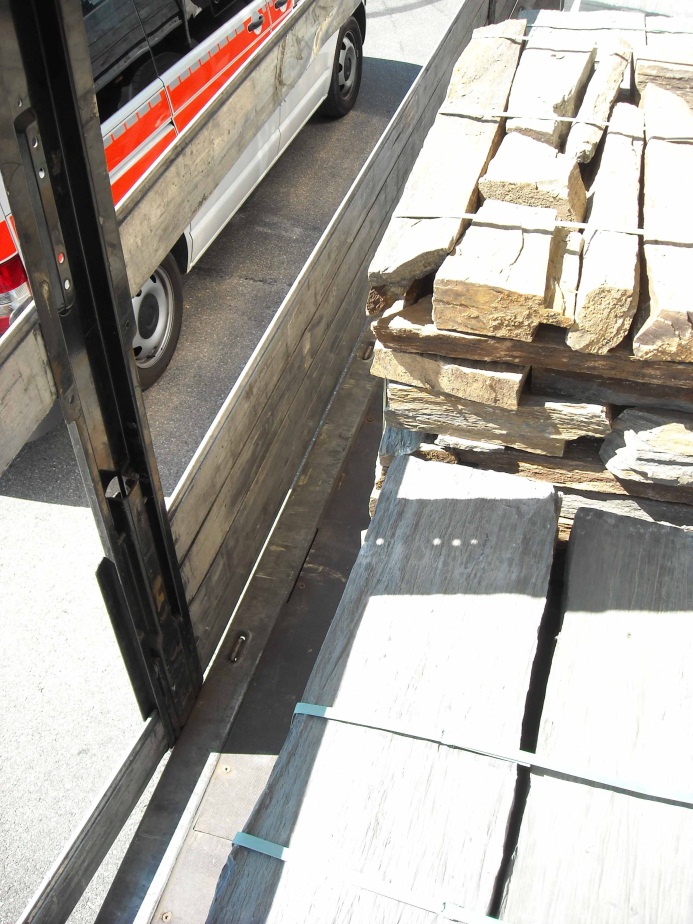 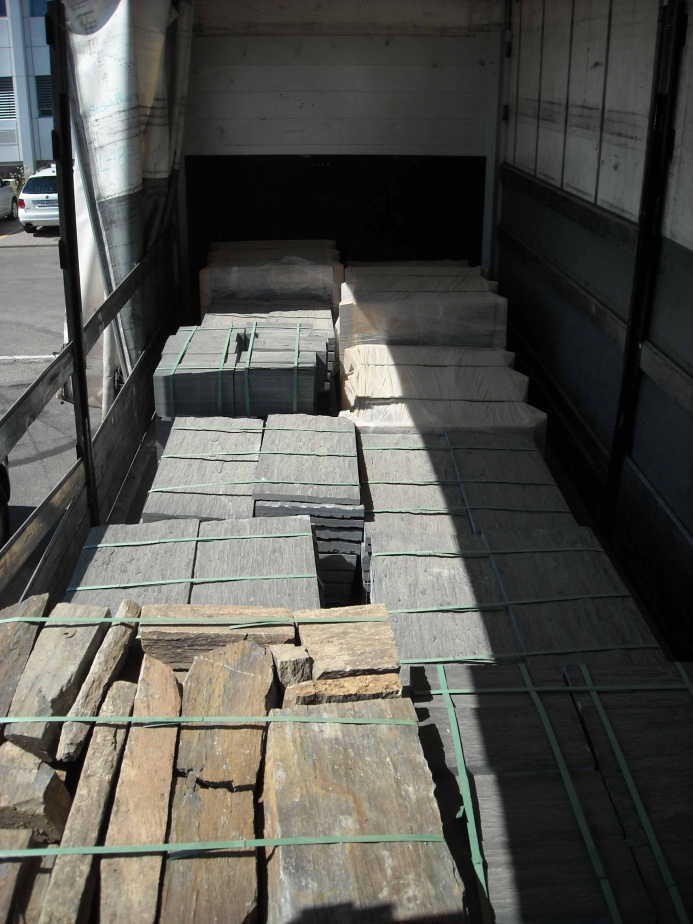 Figures 7 and 8 clearly show the gaps between the individual load units. And both pictures show the pallet with the brown quarrystones that are elegantly stacked to a not inconsiderable height. Because this pallet is packed with a large number of relatively small quarrystones, we have to question its stability. We would suggest packing quarrystones such as these in a crate like those we saw at the front of the vehicle. Stabilizing interlayer dunnage such as sheets of plywood would also undoubtedly help. And wooden cladding or partial cladding around the pallet in addition to strapping would give this load unit considerably greater stability.

The Swiss police officer who kindly made these pictures available to us reported that the loading surface had not been swept clean. If we look at the considerable amount of stone fragments that can be seen on the quarrystones in Figure 4, we can well imagine that the loading surface was not clean. If we accept that the stones and the pallets offered a coefficient of friction µ of 0.3 on the unswept loading surface, the end wall would have needed to provide a securing force of 0.5 times the overall weight of the load if the load had been stowed as a tight fit. Given an overall weight of 23.6 tonnes, this would have been the case, provided that the vehicle was an XL vehicle. As we have said, it is a prerequisite that the load is stowed as a tight fit to the front. The load was not secured to the sides, but this could easily have been achieved using pairs of loop lashings.

How can a load like this and the securing measures be optimized?

To start with, all the pallets should be packed as neatly as those shown in Figure 2a. We have already said a lot about the stability of the load units when discussing Figures 7 and 8. Another issue that concerns us is the strapping. Stronger straps, preferably made from steel and with appropriate edge protectors to protect both the load and the straps, make a great deal of sense as well as making it easier to handle and above all secure the load. If the vehicle is only a Code L vehicle rather than an XL vehicle, the load must be split and an artificial end wall must be created to fully secure the load to the front. An artificial end wall can be created using two or three stable pallets, preferably Europallets placed on end. Two pieces of squared lumber passed through the pallets provide the artificial end wall with the necessary stability.

And finally, a comment about the single-use pallets. They can be clearly seen in Figure 2a. Probably in order to save money, they have thin, high bottom dunnage to which the bearing surface has been nailed. But it is a well-known fact that small feet, narrow and tall, more often than not lead to a fall. Which means that square or even rectangular bottom dunnage would be far more stable and better able to withstand multiple handling operations.