But that's how the big boys do it …

The local police were more than mildly surprised to see this car and trailer drive past them. The trailer, which had no side gates, was loaded with beach and pine logs.

The logs were loaded in the same way that would, up until relatively recently, have been practiced by specialist lumber carriers. 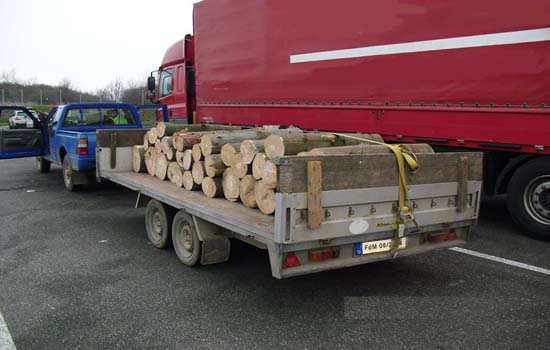 The logs are approximately 1.2 m in length and have been placed on the wooden loading bed transversely to the direction of travel. The only securing measure was a single lashing belt placed over the length of the load and hooked into the frame.

We do not know whether it was possible to apply any significant pre-tensioning force using the ratchet handle. The angle at which the belt is applying pressure to the load (just three logs) is so unfavorable that it is highly unlikely that any significant securing force could have been achieved. Indeed, it is probably safe to assume that the belt is intended to also secure the home-made extensions to the end gates. And, for the sake of completeness, we should also mention that a flimsy belt like this is unable to deliver any securing force, or at least no significant securing force and is at best suitable for holding up trousers. The fact that the ratchet handle was not properly closed is just another sign indicating that the gentlemen responsible for this transport were not particularly familiar with how to secure loads.

The load is not secured to the sides at all. This means that the bulk of the load is simply resting on the loading bed, secured only by any friction that may be present. 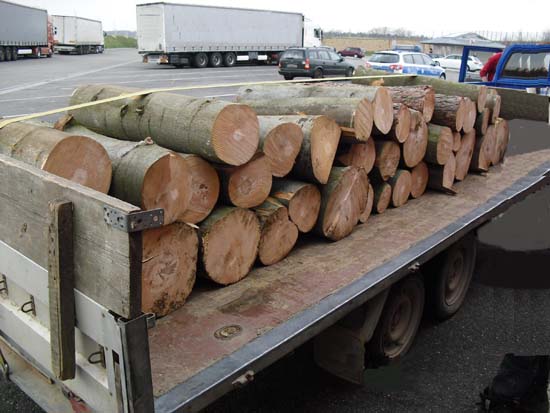 The driver only wanted to take a few logs home to chop them up for winter firewood. He quite clearly did not take a great deal of thought about securing the load.

What can happen during the trip?

That depends entirely on the situation. If the driver is on good roads and manages the journey without having to brake sharply or swerve, there is a good chance that he will make it home without losing any of the load.

But is that in his hands? If he drives particularly cautiously, perhaps?

Not really. People should always drive cautiously. But does that help when an unexpected hazard suddenly arises? For instance if another driver ignores the right of way or if a child suddenly runs into the road?

Nobody is immune from unpredictable situations such as these.

And if they do arise, the driver will break hard to avoid injuring the child or colliding with another vehicle. The alternative would be to swerve to avoid the situation.

And what would happen to the load at moments like these? 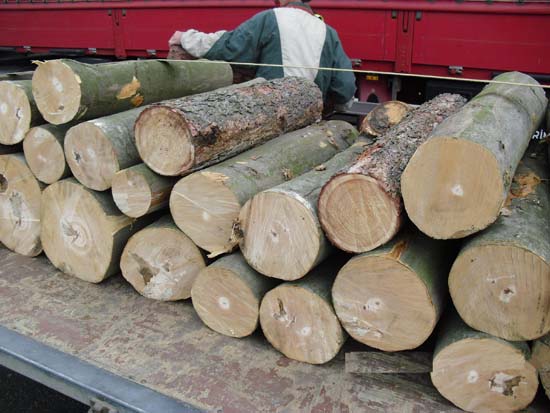 No matter whether the driver swerves or brakes hard, the load will always try to maintain the same speed and direction. This is the result of inertial forces. If the load is firmly secured to the vehicle, these forces are dissipated into the chassis of the vehicle and the load remains in place.

In this particular case, the load can slip or roll forwards so that individual logs can escape over the front end gate and fall onto the road.

If the driver swerves, there is a risk that the entire load will start to slip and fall onto the road without being restrained in any way.

This could represent a risk to life and limb of third parties.

It goes without saying that this should be avoided at all costs.

So what can be done?

Even here, it is not difficult to secure the load properly.

To start with, the side gates should be fitted to the trailer. This gives the front and rear end gates greater stability.

The logs can then be placed lengthwise on this surface. Around three logs would fit one behind the other. All the logs would then be below the height of the gates. Three lashing belts could also be used to "lash down" each stack, thus relieving pressure on the end gates and side gates. The tie-down lashing would also increase friction within the load and onto the loading surface. This would further reduce the force the end gate would have to withstand in the event of emergency braking.

Sufficient lashing points should be available. Care must be taken to attach the belts before loading the logs, because the lashing points would no longer be accessible after loading.

The manufacturer will be able to provide information on the strength of the end gate.