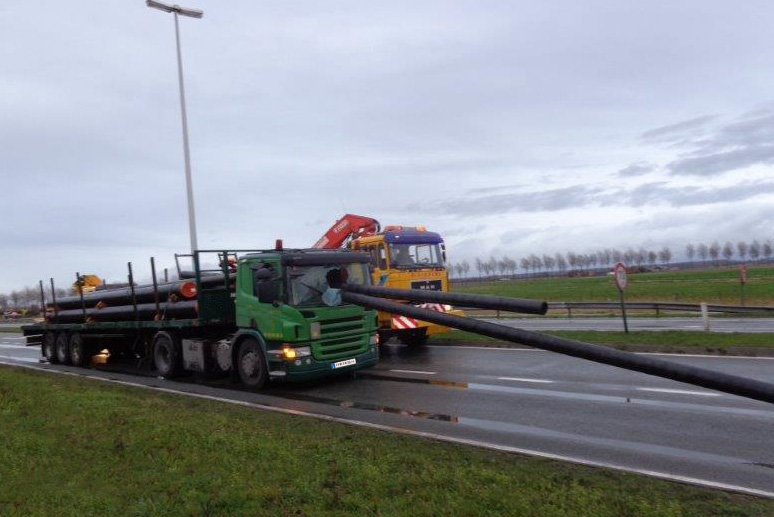 Our readers will undoubtedly forgive us if we adopt a somewhat more ironic tone for our column this May. We have been writing this column for a good few years now, examining photographs of accidents and successful and unsuccessful attempts to secure loads, while making our judgments, sometimes gently and sometimes with a considerable amount of sympathy. But sometimes we can only shake our heads in despair.

The Photo of the Month for this May is again one that makes us despair. The tale itself is quickly told: Somewhere in Europe, gas pipes were being transported from A to B. And because the journey was only a couple of kilometers, it was deemed unnecessary to secure the load in any way whatsoever. After all, most of the pipes were secured by the truck itself. But three of them managed to find a gap and went their own way at a set of traffic signals.

But the real irony in this tale is barely credible: Exactly the same accident happened to exactly the same company twice on the same day with exactly the same cargo and method of loading it. We can only hope that this duplication reinforces the salutary effect. It is most improbable that those concerned will in future be so cavalier about securing loads and that they will leave gaps that beggar credibility.

But let's start at the beginning. 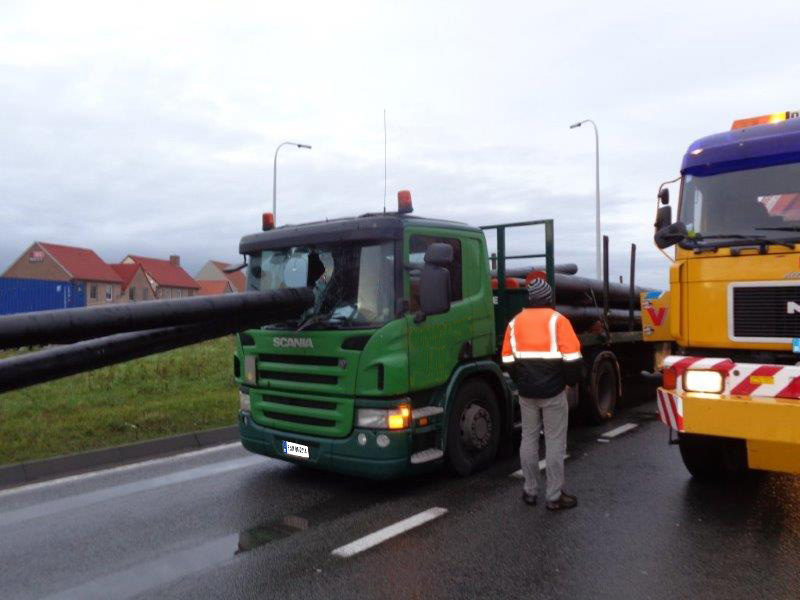 The good news is that nobody, neither the drivers nor any innocent party, was injured in either accident. The only thing to have suffered any damage was the vehicle.

So what about the name of this month's photo? Quite simple! The gas pipes were loaded against the end wall. And where it was possible to load the pipes in contact with the end wall, this was a good idea. But in front of the three pipes that penetrated the driver's cab and smashed through the windshield onto the road, there was a gap. And this photo shows that the end wall structure was somewhat permeable. That the driver is still alive is due to the fact that there appears to have been just sufficient structural rigidity to provide some form of "load securing" at this point. There is a serious credibility gap if the loader and, above all, the driver believed that this load was safe. But because credibility gaps cannot be tolerated in the world of load-securing, we need to have a careful look at securing strategies such as this one.

Something which seems to be an attempt to secure the load can be seen on the first stanchion on the left of the vehicle. But when we asked, we were told that this was attached during the recovery operation. Both this vehicle and its twin were indeed on the road with no form of securing whatsoever. 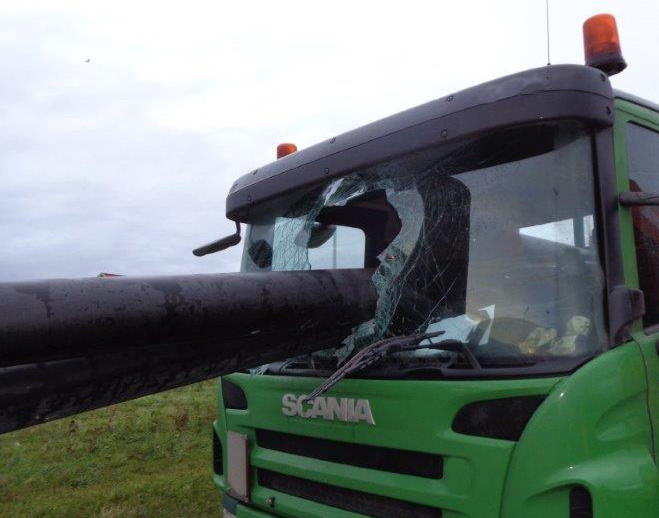 The photo in Figure 3 is among the most impressive, as it almost tangibly demonstrates the omnipresence of the laws of physics. If these pipes had penetrated the cab at a different point, the driver would probably not have escaped alive. 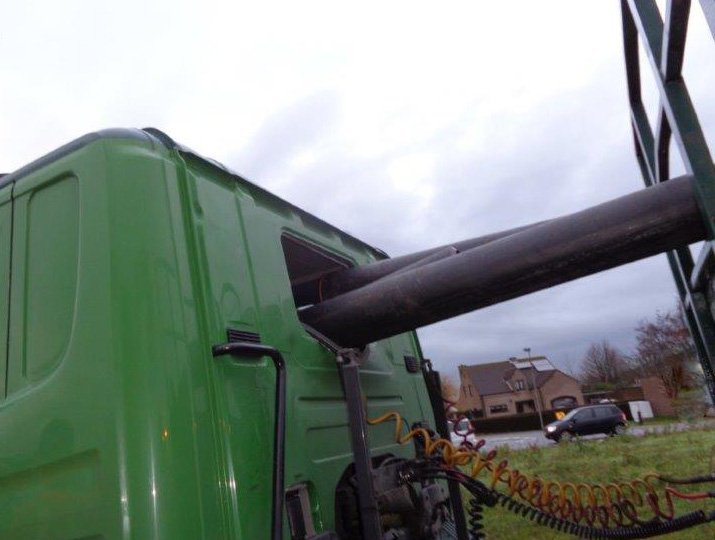 A total of three pipes appear to have penetrated the rear screen into the cab. The rear wall of the driver's cab would not have afforded the driver any protection if the pipes had broken through at that point. 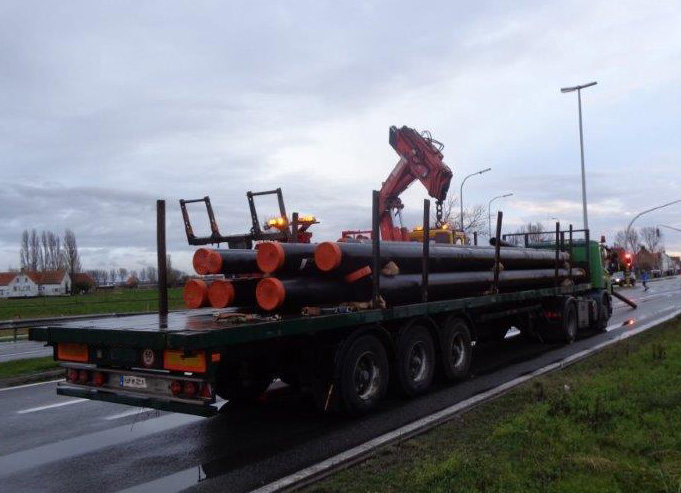 Aside from the fact that three of the pipes penetrated the driver's cab and even smashed through the windshield, Figure 5 is the most interesting from the perspective of load-securing.

Load distribution
In an attempt to secure the gas pipes, they were all loaded against or somewhere near the end wall structure. This means that the gas pipes are positioned well forward; far too far forward from the point of view of load distribution. Even though we do not know the actual weight of this load, we shall assume that the vehicle was loaded to capacity for the purposes of our discussion. It does not require psychic powers to see from this photo that the center of gravity of the load is way too far to the front.

Tight fit
We have already said virtually all there is to say about the tight fit to the end wall. If one really wants to exploit the potential of a tight fit to the end wall, it may be possible to do this for the bottom layer. But considerations of load distribution mean that any second layer must be loaded much further to the rear. But with such a heavy load as this, it would make more sense to place a second, stable end wall at an appropriate distance from the actual end wall. This would firstly take account of load distribution considerations and, secondly, make it possible to establish a good tight fit to the front. Because the photographs do not show the load from all angles, it is unfortunately not possible for us to do more than guess whether there was a tight fit to the side stanchions. Figure 5 makes us seriously doubt that this was the case.

Wooden dunnage
It could be argued that it was not even necessary to achieve a tight fit to the sides, because the pipes were resting on lumber and were secured with suitable wedges. Although it may be true that the pipes were resting on lumber, we know nothing of the quality of the wedges. But we do know that the wedges under the second layer were only nailed to the top of the lumber rather than on both sides. This means that the second layer was able to slide to and fro on the first layer.

Friction
Wooden dunnage is, of course, a good idea. It has a greater coefficient of friction than the steel loading surface and offers the possibility of nailing, or preferably screwing, pipe wedges to the dunnage. It would be even better if the dunnage was constructed as proper pipe clamps (with wedges secured to the top and bottom of the lumber) and if these pipe clamps were covered with suitable anti-slip material on both sides. This means that the load could be secured as follows, for instance:

Securing option
An artificial end wall is constructed at an appropriate distance from the actual end wall to allow the weight of the pipes to be distributed properly and to offer a good tight fit during transportation. Such an artificial end wall must be sufficiently robust. This can be achieved without difficulty by making use of a number of stanchion sockets. The pipes themselves are loaded onto wooden dunnage covered on both sides with anti-slip material providing a coefficient of friction greater than 0.5. Pipe wedges are secured to both sides of the wooden dunnage. Pipe dunnage such as this is also available in steel or aluminum which can be adjusted to the appropriate lengths using perforated rails. This is an eminently sensible option.

It really can be that easy to secure a load well. As far as this month is concerned, we are thankful that neither the driver nor any other road user was injured, a feeling undoubtedly shared by you, our readers.