We constantly use this column to underscore the importance of friction. Friction and mechanisms to increase friction generally save those responsible for securing loads a great deal of effort. This also explains the widespread use of anti-slip mats. This Photo of the Month gives a tragic example of the real importance of friction. 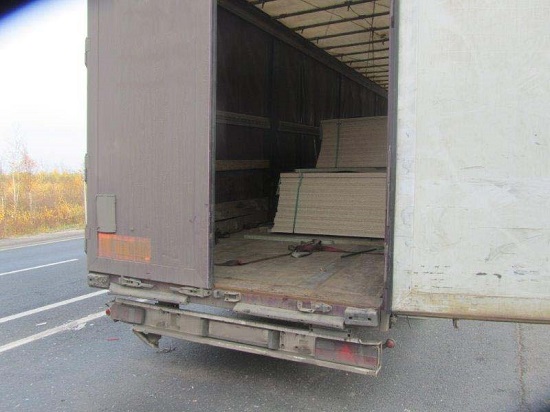 This vehicle was traveling along the motorway between St. Petersburg and Moscow. But the motorway could have been anywhere in Europe. The vehicle was carrying a full load of sheets of particleboard. Such a load brings with it several problems.

Looking at Figure 1, we can only guess that the load has slipped forwards. 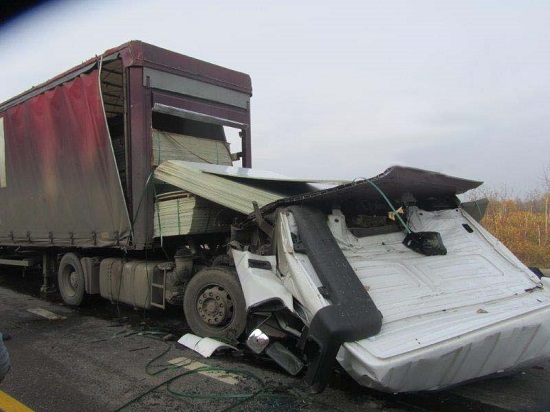 Figure 2 confirms that our guess was distressingly accurate. You can clearly see that unfortunately (as far as friction is concerned) the particle board here is coated, which means that its coefficient of friction is almost certainly even lower than the usual value for particleboard. It is estimated that the coefficient of friction for this coated particleboard lies below 0.1, perhaps 0.05 or even lower.

So how did this accident happen?

The driver had to brake to slow down on the motorway. The lack of friction meant that his load was unable to slow down, and it broke through the end wall of the trailer into the driver's cab, completely destroying it and pushing it forwards.

The driver did not survive the accident.

Unfortunately, we are unaware of how the load was secured. It is probable that tie-down lashings were used, as they are the simplest way of securing a load. And what is the principle behind this type of securing?

Pressure is applied to the load by pre-tensioning the belts. This pressure, or pre-tensioning force, applies an additional force that presses the load against the loading surface.
This increases friction. But it only makes sense to use this method if the weight of the load is not too great and the existing level of friction is already relatively high. After all, what friction is there to increase if the load has virtually no friction in the first place? If there is nothing there, it cannot be increased.

The packaging was made up of plastic straps running crosswise and lengthwise. This packaging is primarily there to allow the load, i.e. the particleboard sheets, to be handled as a single load unit when moving it around the production plant and loading it. These plastic straps, which bundle the load to form a sensible load unit, are not to be confused with load securing measures. Sensible, effective bundling is of assistance when securing the load and poor bundling makes it harder to secure a load. If these packages are then stacked on the truck, these plastic straps not only have to keep their own package together, but also the one or two packages stacked on top of it. As a rule, they are unable to do this, because their job is to bundle the particleboard sheets to form a load unit. 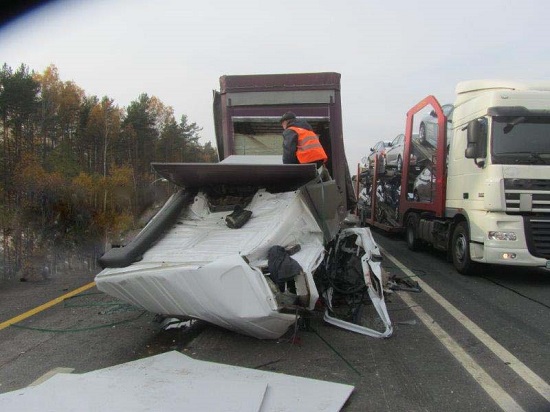 If the load has virtually no friction, it is up to the load securing equipment to deliver all of the necessary securing force. One way of doing this is to use stanchions that can be inserted in the center and at the sides of the loading area, and belts can be used for additional support. If stanchions are used to secure the load longitudinally by loading the packages as a tight fit against them, they must be strong enough to withstand the entire load placed behind them. Belts can also be used to provide additional support, but because the stretching properties of the woven synthetic textile belts are very different from those of the steel stanchions, the stanchions will first be subjected to most of the force, and only if these fail will the belts take up their full lashing capacity (LC). It is also possible to use chains to support the stanchions, but this runs into the problem that the particleboard is prone to damage.

If loads like this are to be secured with belts, this can only be done using loop lashings and round-turn lashings. Such loop lashings have to be placed carefully in all potential directions of movement (to the front, to the rear, and to both sides). Because particleboard generally has extremely sharp edges, edge protectors must be used to protect the belts wherever they pass over the edges.

To recap: Before a belt is able to deliver its full lashing capacity, the load has to slip a couple of centimeters into the belt. Even this small amount of slippage is enough to allow a sharp edge to cut through a belt, but only if it is not adequately protected.

When we talk about responsibility, we can, of course, only refer to the situation under German law. In Germany, there are three layers of responsibility: 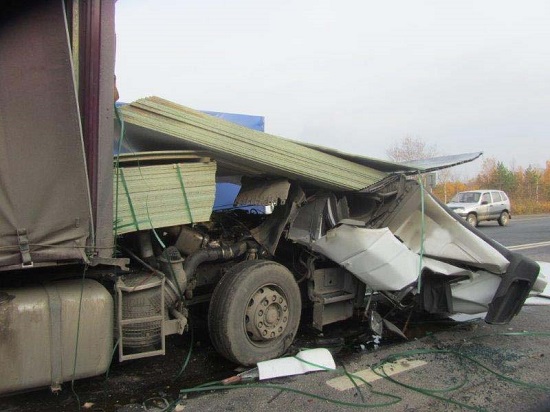 We often adopt a somewhat sarcastic tone in our column. With this Photo of the Month, we are saddened, struck by the enormity of what happened and filled with sympathy for the family of the driver who died. We hope that this case will help to massively increase awareness of the issue of load securing and heighten people's understanding of friction so that this death of one of our colleagues on the motorway was not in vain.

As we approach Christmas, our thoughts are with the family of the driver. May we wish you all a happy Christmas and a safe and successful new year.