This truck was carrying a crate with a gross weight of 19,950 kg. The load was secured with tie-down lashings. We are unaware of whether 7 or 9 tie-down lashings were used, and unfortunately we do not know whether anti-slip mats had been placed under the wooden crate either. 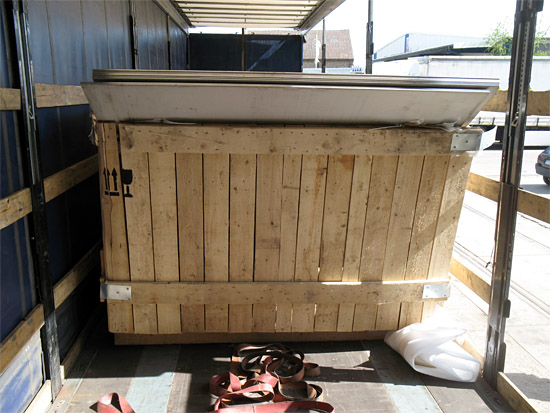 But one thing we know for sure is that the load was even more poorly secured inside the crate than it was outside. The crate contained curved metal plates with a thickness of around 10 to 12 mm, stacked with the concave side facing down. From the outside, the crate itself made a pretty good impression. To protect them from corrosion, the plates were packaged in airtight plastic sheeting before they were sent on their way. 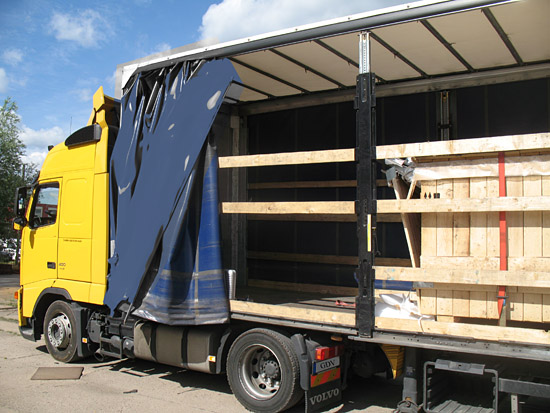 In this column, we have frequently drawn attention to the fact that packaging is a key aspect of good load securing. Good packaging is the prerequisite for the safe transportation and handling of loads on the road. This load was not safe either to be transported on the roads or to be handled. If the outside of the load was in all probability not adequately secured (we shall come back to this), we are entitled to ask what the load securing looked like inside. 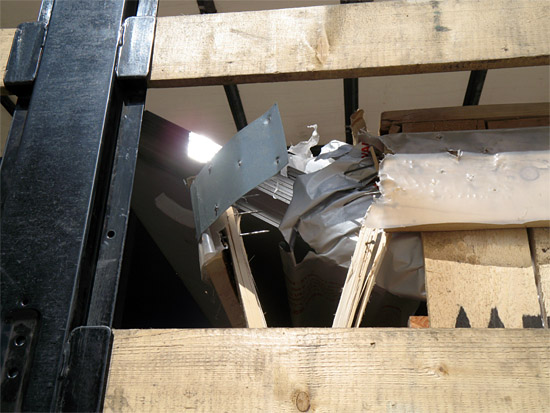 It is a fundamental prerequisite that the cargo should be placed in its packaging (in this example, the metal plates should be loaded into the crate) in such a way that it will be able to withstand the loads that can be expected. If the expected loads include this crate being transported by road, the metal plates must also be able to withstand the acceleration forces experienced during road transportation in the crate.

This, they quite clearly failed to do! They penetrated not only the anti-corrosion sheeting, but also the end of the crate. 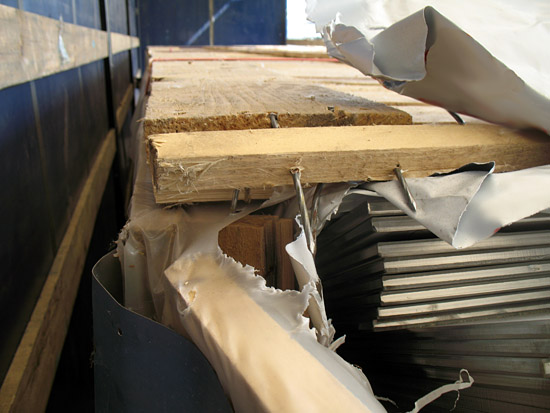 It was only by a stroke of good fortune that these hefty metal sheets weighing a total of 17.5 t were not subjected to an even greater load that could easily have caused them to part company with the crate or even the truck. In the event, the only damage was to property. 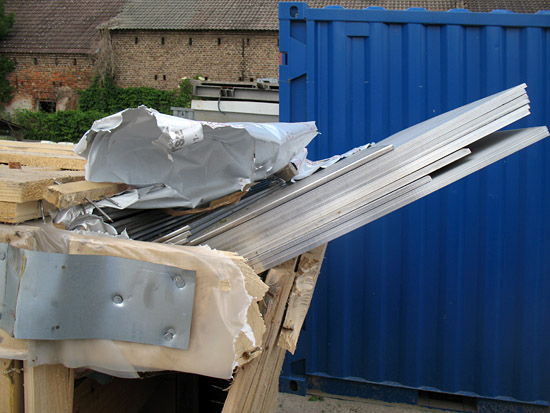 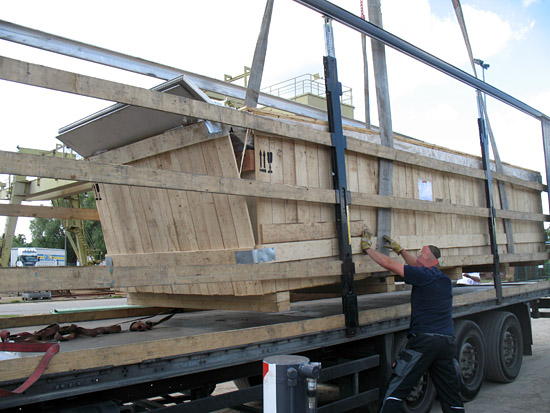 The crate will now be transported back to the manufacturer, any damage repaired and a sensible crate built before the transport operation can start all over again.

As far as the load securing is concerned: At this point we would like to do a sample calculation. We shall assume that the crate actually weighed 19,950 kg. To simplify matters, we shall use a value of 20 t.

Initially, we shall not place any anti-slip material under the crate. The rough-sawn lumber has a coefficient of friction μ of 0.4 at most. We have to secure against 0.8 g to the front. We can subtract the friction from this. This leaves 0.4 x 20,000 kg. This means that this crate requires 8,000 daN of securing force. If we assume that the crate was secured using long-lever ratchet tensioners, and if we further assume that a pre-tensioning force of 750 daN is achieved with each tensioner, and we simply ignore the k factor and safety factor and so assume that each tie-down lashing applies a pre-tensioning force of 1500 daN, then the 10 tie-down lashings with long-lever ratchet handles deliver a total of 6000 daN securing force without the use of anti-slip materials.

We can dispense with the second sample calculation in which anti-slip materials are used, because the force required to secure the load decreases disproportionately as the friction increases.

But we just mention that in passing. Your load securing columnists wish you all a safe journey every time!