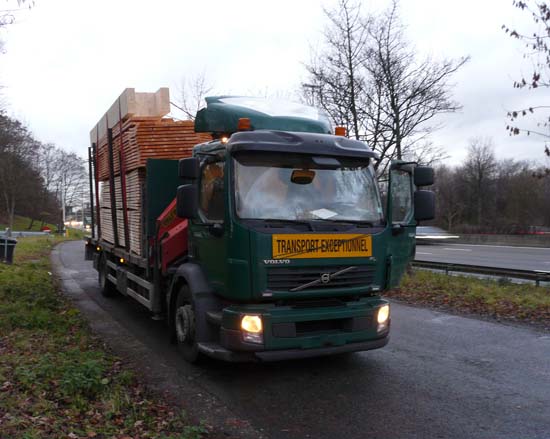 This consignment of lumber is a rather peculiar load. The vehicle is fitted with stanchions on the sides and essentially appears to be suitable to take loads of lumber packaged in this way. The first thing that strikes you is the impressive height to which this vehicle has been loaded. We also think that it is worth mentioning that the way in which the lumber has been packaged using intermediate spacers (laths) makes it an extremely flexible load. This flexibility is clearly shown by the long, diamond-shaped gaps to the sides between the bottom package of lumber and the one above it.

As far as we can tell from the front, it was decided to secure this load with tie-down lashings. 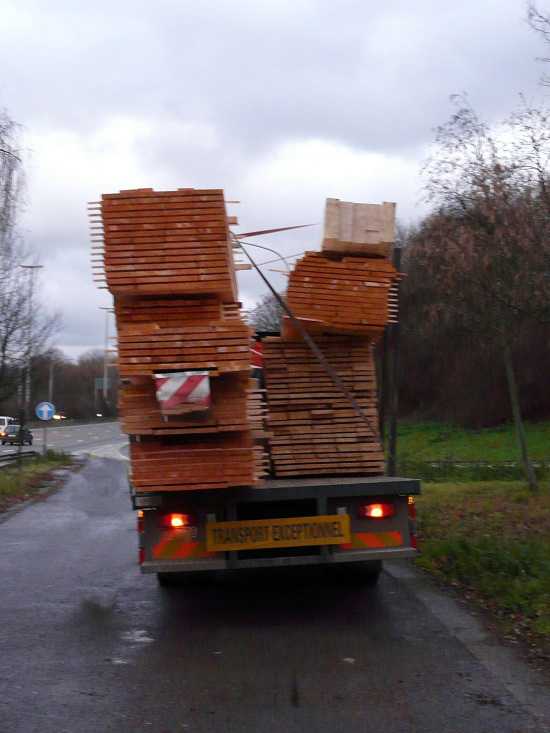 Figure 2 shows the vehicle from the rear and confirms our impression that this really is an exceptional load. Again, the first thing that catches our eye is the height of the load. But before we have had the chance to digest this first impression, the V-shaped way in which the lumber has been loaded captures our attention. 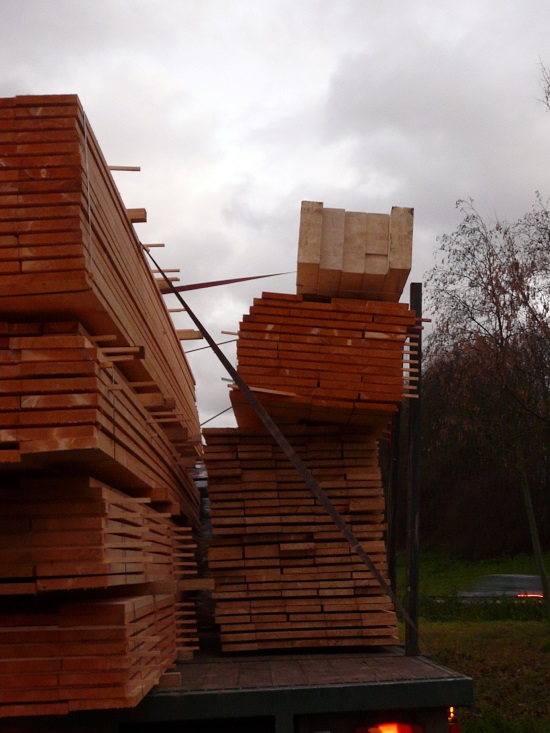 To do justice to this impressive loading method, we shall look at it in more depth with a detailed picture.

Stanchions at the edges of the loading area are always good for securing a load to the sides or even in a longitudinal direction as a tight fit. Unfortunately, no attempt was made to establish a tight fit in this case. Even the bottom two packages have been placed at a considerable distance from the stanchions. If an attempt had at least been made to load the packages as a tight fit against each other (on the bottom two layers at any rate), we could have understood this, because use of a tie-down lashing demands that the elements of the load are loaded in such a way that there are no gaps between them. No matter how we try, we are at a loss to imagine why the third package of lumber loaded on the right-hand side of the vehicle and offset to the right still did not manage a tight fit to the side. The laminated trusses loaded at the very top finally managed to deform the third package in such a way that a tiny amount of tight fit to the stanchions was established. At least, this would appear to be the case. The laminated trusses loaded at the top, which undoubtedly exceed the height of the vehicle, have no relevant tight fit to the side stanchions and must therefore be secured by tie-down lashings alone.

A word about the packaging: In order to allow freshly cut lumber to continue drying properly, it is normal and sensible to package it using laths to allow the air to circulate around the boards. The problem with these laths is that they protrude a long way out to the sides and, if an attempt to been made to load the lumber as a tight fit to the side, these "shark’s teeth" would have protruded beyond the edge of the vehicle. 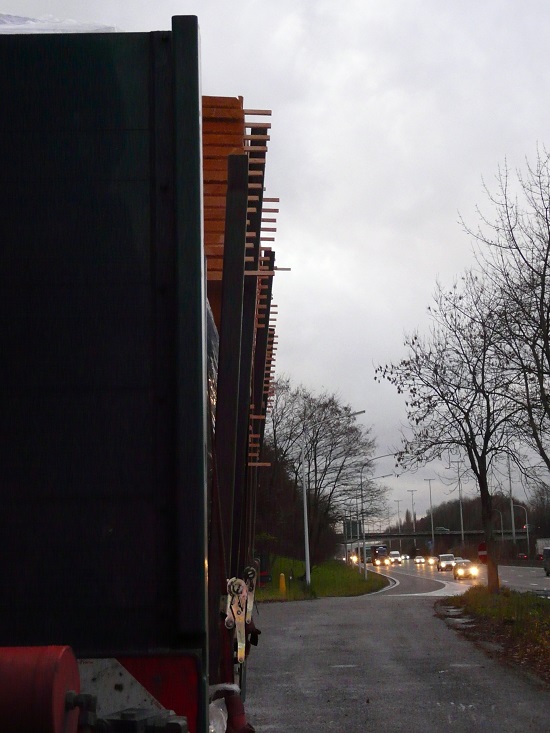 On the left of the vehicle (Figure 4), we are confronted with an entirely different picture. The packages of lumber that were loaded on the left had a good tight fit to the side stanchions. The load on the stanchions, perhaps exacerbated by the extreme height of the load, caused them to bend outwards considerably. We estimate that the vehicle is anything up to 20 cm wider at the top on this side. You can clearly see the "shark’s teeth" that we described in detail under Figure 3. Anybody will understand that a vehicle must not be loaded beyond its dimensions and that a vehicle’s load must not render it significantly wider. 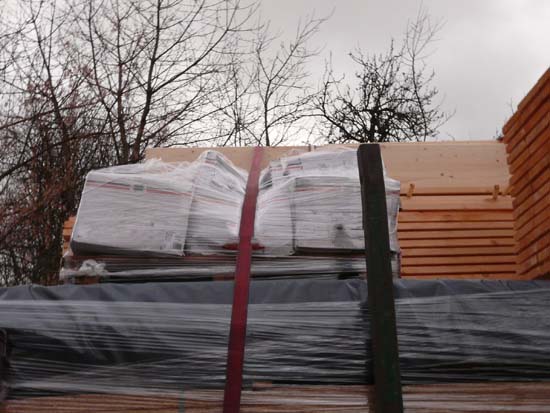 We shall shortly be assessing the securing measures that were taken in detail, but before we do so, we want to talk about this securing measure in particular. The driver and the loader were faced with the challenge of sensibly securing a "soft" load (Figure 5). A tie-down lashing has been passed over the soft load and compressed it to such an extent that it results in a sort of tight fit, at least longitudinally. We are entitled to ask whether people should be allowed to take such poor packaging on the roads. Loads such as this can probably only be transported safely in vehicles with side walls that allow the packages to be loaded as a tight fit. 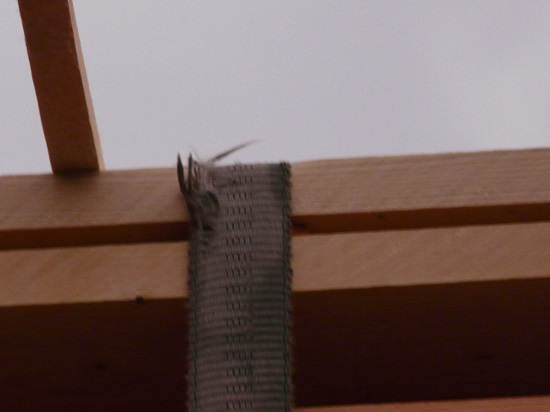 Before we speak in more general terms about the load-securing measures that were taken, we just want to remind you that even wood has sharp edges. It is not hard to see that the wood has already left its mark on the load-securing equipment. This belt is now fit for scrapping and should no longer be used for "securing" purposes. The belt that can be seen in the foreground of Figure 3 already has a number of places that indicate that it is ready for scrapping or at least will be soon.

As we mentioned right at the top, lumber is a flexible, elastic load. This is a property of this natural product that is of great value in many applications. It is, however, a drawback that packaged lumber behaves like a spring during transportation and seesaws on the loading area. If these packages are secured with unprotected belts, the sharp edges of the lumber act like a file on the belt during transportation and, depending on the nature of the edge and the wood concerned and, of course, the length of the journey, a belt will not even survive its first trip when confronted with this otherwise placid load.

Even ignoring the fact that the load has been piled far too high on the vehicle, this appears to be an exceptional consignment in several respects. As far as load securing is concerned, this gap in the load is the biggest that the columnists of this load-securing column have ever witnessed. Let us remind ourselves: If a load is to be secured using tie-down lashings (and this one is eminently suitable for this method because of the relatively high level of friction), any individual packages of the load must be loaded in such a way that they form a tight fit with each other, i.e. with no gaps, before they are lashed down. When a load is applied by the load-securing equipment, the forces exerted diagonally towards the center by the tie-down lashings will push the individual packages closer together. This reduces the distance that the belts pass around the periphery of the load and immediately causes the pre-tensioning force to fall towards zero. With a gap in the load of this magnitude, the load will not only slip inwards, but may well sway back and forth, at least in the case of this artistically stacked tower. No meaningful securing effect can really be attested here.

Even though this load can be secured excellently using tie-down lashings, we would nevertheless recommend loop lashings. Because it is difficult to employ loop lashings with side stanchions, central stanchions would be the method of choice. If packages of lumber with protruding intermediate layers are to be secured, the central stanchions must simply be a little wider or must be inserted in pairs. If wider packages of lumber are to be loaded, stanchions that can be inserted anywhere make eminent sense. The advantage of central stanchions is that the forklift truck can load the package as a tight fit directly against the stanchions without them being in the way during loading. The loop lashings can be laid out on the loading surface beforehand, and each can be passed over the load alternately to the opposite side when loading is complete. The loop lashing has a number of effects:

If a number of packages are stacked on top of each other, it may be necessary to secure these packages by several "layers" of loop lashings. Depending on the nature of the loading surface, it may make sense to use anti-slip mats directly on the loading surface. Where rough-sawn lumber is in contact with rough-sawn lumber, increasing the friction in this way does not necessarily appear to be appropriate or sensible. Provided that it is possible to achieve a tight fit against the end wall at the front, no further load-securing measures are necessary, because the load is secured to the rear by at least four (usually more) loop lashings that also act as tie-down lashings and provide sufficient securing force. In addition to the purely vertical effects of the loop lashings, the load is also pressed against the stanchions, which provides an additional securing component if the stanchions have also been provided with anti-slip or similar material in order to protect the load. If the lumber is planed or if the loader or person responsible for securing the load is not certain whether the load-securing measures that have been taken will be adequate, tie-down lashings would be a sensible way to supplement the measures taken.

Once again, we would point out that the sharp edges of the swaying, bouncing lumber can do considerable damage to the belts and that some form of edge protection is an extremely sensible precaution. Ideally, protective sleeves should be used so that nobody has to clamber over the load.

May we wish you a safe and sound journey!