Here, it would appear that a vehicle originally designed for transporting bulk goods (gravel, sand, etc.) is being used to transport plastic drinks bottles. In principle, there is no reason why this should not be done. The side and end walls are robust and capable of fully securing the load if it is loaded as a tight fit. 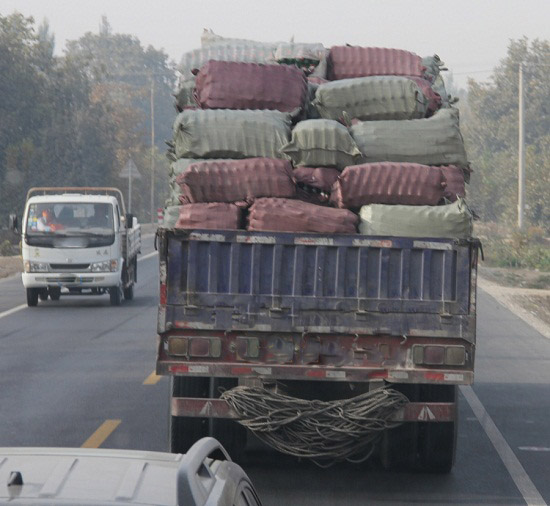 But there is one prerequisite: The load units must be stable and loaded in such a way that their center of gravity is well below the top of the side walls. In this interesting example, this is not the case. The load has been stacked to form a slight pyramid and the load-securing relies 100% on friction.

For reasons unknown to us, the large load-securing net hanging over the rear fender was, unfortunately, not used. Undoubtedly, there will be regular readers of this column who will mock and claimed that a net would only act as a tie-down lashing and that we columnists usually heap scorn on this. That is correct! If the load is heavy and there is no tight fit to the front, the effectiveness of a tie-down lashing is quickly exhausted. But in this case, we shall, for argument’s sake, assume that there is a tight fit to the front and also hope that the plastic sacks have a relatively high coefficient of friction. In this event, a great deal could be achieved with a tie-down lashing, even if the ropes had to be pre-tensioned by hand. As soon as the load slipped forward into the net, additional tight-fit effects would arise, that should not be underestimated. To the rear, a net would achieve excellent tight-fit effects with this almost exemplary stepped method of loading. But unfortunately, the net was dispensed with in this case.