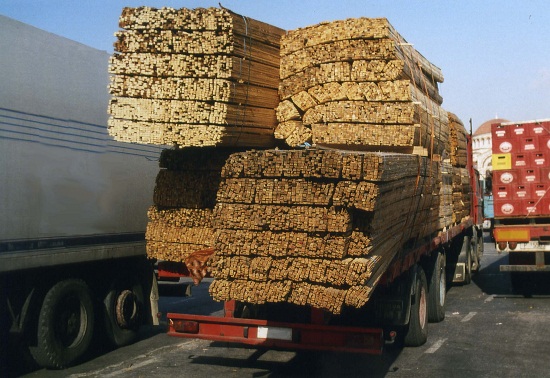 This load of lumber is indeed a sight to behold. One of the fundamental problems in the field of load-securing is inadequate packaging. In this case, it is the catastrophic way in which load units have been formed. The lumber has a square cross-section which, by nature, has a tendency to roll, and has not been combined to form stable load units. Stable dunnage below, above and between the lumber would have made a considerable improvement. Why the individual small packages have been stacked on end within the load unit remains a mystery to this simple load-securing columnist. Stanchions on the sides would have provided support for the load, which looks in dire need of such assistance. Central stanchions are particularly suitable for loads such as this, as they allow the cargo to be loaded as a tight fit and provide the possibility of direct securing and unproblematic loading and unloading using a forklift truck.