Roadworks on roads of all types from minor roads right up to freeways are an all too familiar sight that often annoys us. But we are often unaware that the railroads also have to be renewed, in every sense of the word. This month, our Photo of the Month has a look at the railroads, or, to be more precise, at the rails themselves. If the rails are worn, they must be replaced and, because steel is an extremely valuable raw material, they are sent for recycling, which means transporting them to the nearest steel mill. Given that the rail network in Germany covers many thousands of miles, it is a sure bet that a good number of truckloads are transported by road in addition to the loads transported on the rail network itself. 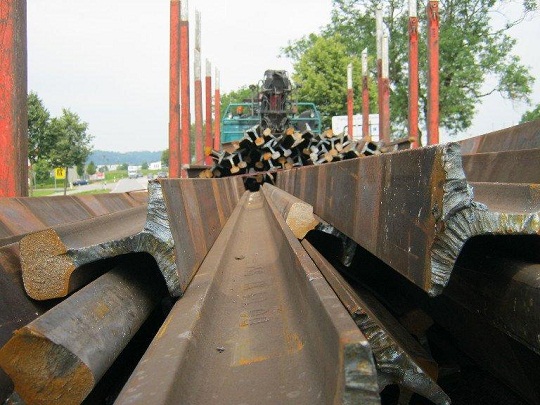 This vehicle is made up of a 3-axle tractor and a trailer with a small gooseneck. Unfortunately, we did not receive a photograph showing a good view of the sides of the vehicle, but we do have a large number of detailed photographs. 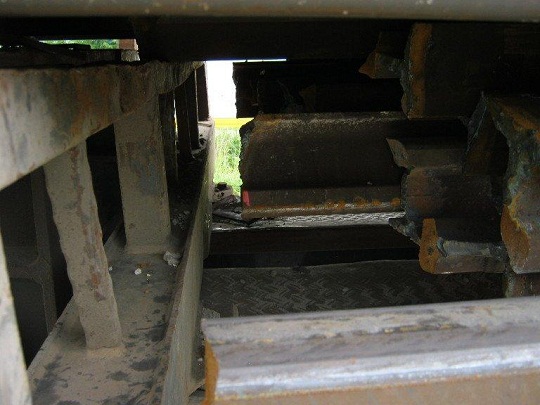 The gooseneck can be seen in Figure 2. It is not possible to tell with any certainty whether it would actually have been possible to load the rails against the gooseneck as a tight fit, but we can see that this was not done. We shall return to this issue for a more detailed evaluation later. 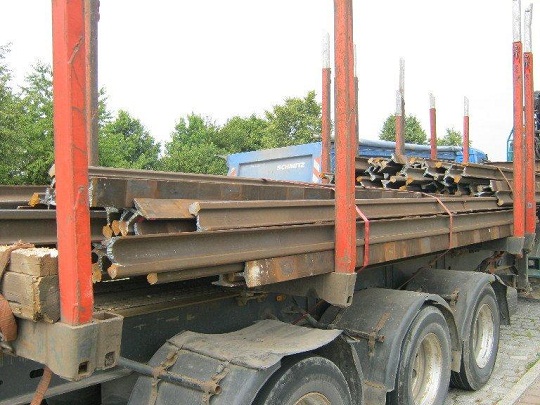 The trailer with the small gooseneck is fitted with sturdy stanchions, which ensure that the load is secured safely to the sides. The rails are primarily loaded towards the front of the vehicle and have been stacked in a somewhat rounded form. Because the rails interlock very well, it would have been preferable to load them flat, i.e. so that the top layer formed a tight fit against the stanchions. We are not in a position to assess whether this method of loading the interlocking rails, namely in a somewhat rounded form, could create problems with individual rails rolling sideways. But, looking at it from our desks, this seems to be the least of the problems. 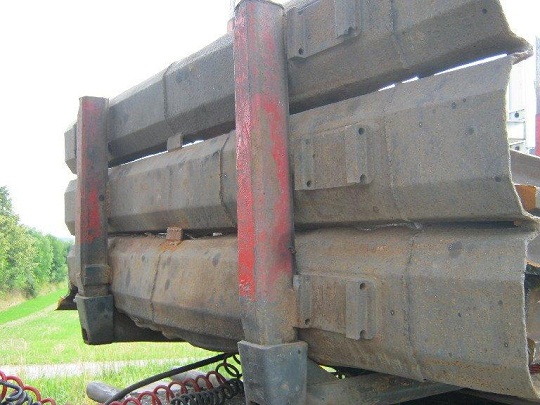 Overall, it is quite clear that great store is set by a robust tight fit when loading rails. This end wall is made up of steel sleepers that are welded firmly to the front stanchions. A thoroughly robust construction. We do not know whether this end wall has been connected to the vehicle with comparable zeal. 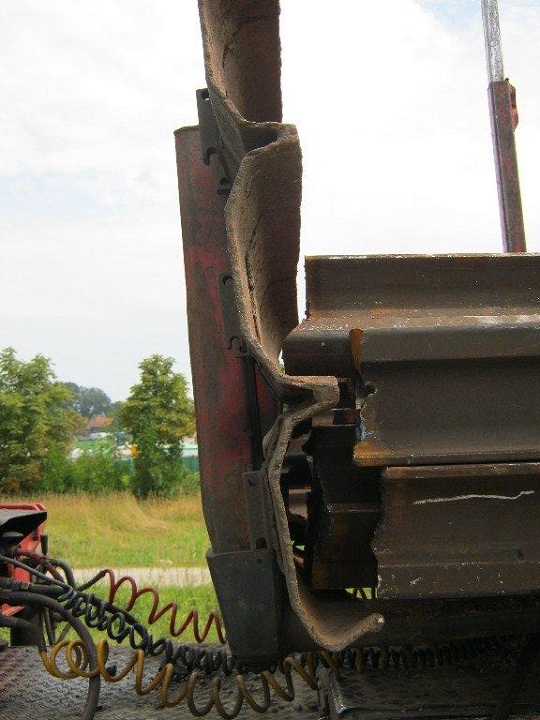 The rails loaded on the front of the vehicle have, indeed, been loaded more or less as a tight fit against the end wall. Some individual rails are tight against the end wall, which means that it is not possible for the entire load to shift as a block. At worst, one or two rails may shift forwards slightly under load. This appears to present no problems whatsoever. 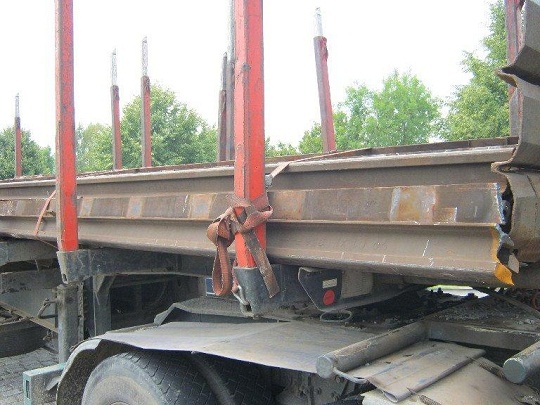 If we have a look at Figure 6, we begin to discover the real problems with this consignment. The strong end wall is not wide enough with the result that one or two rails or, if more rails were to roll from the top layer of the load, several rails are able to slip forwards. Although jamming effects between the load and the stanchions undoubtedly result in a modicum of securing force, such effects cannot deliver the necessary 0.8 g securing force to the front. In this example, the securing of the load has been left to chance, and it would seem that a great deal of good fortune would be needed to avoid mishaps. 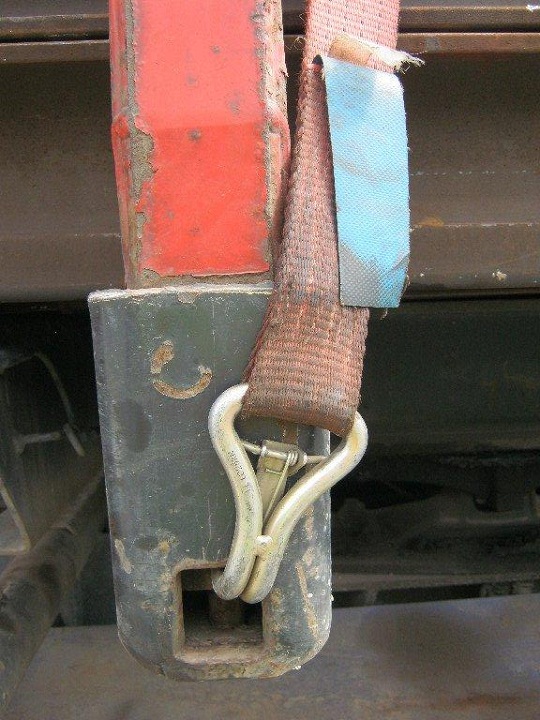 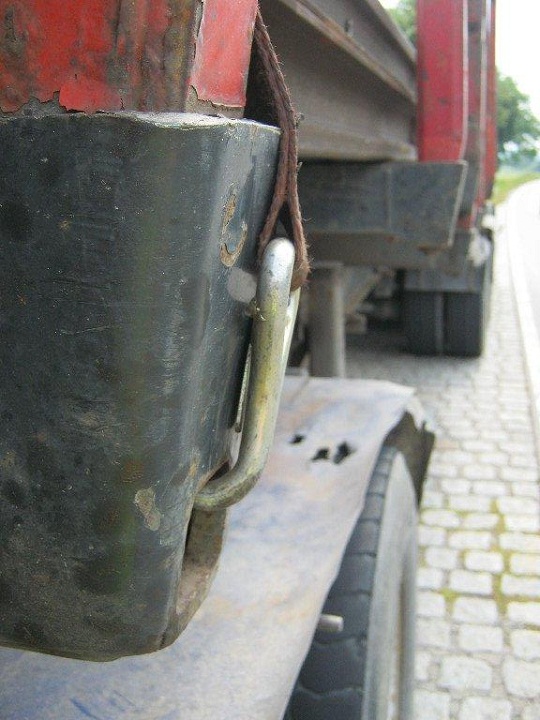 No matter what you may think about the use of tie-down lashings for securing such heavy loads, these photographs seem to provide an ideal opportunity to talk briefly about the use of belt hooks. As often as not, the driver is forced to deal with the problems of securing a load without assistance. There is frequently a lack of load-securing points on the vehicle. But hooks are available that can easily be hooked into the chassis, side member or any other load-bearing point of a vehicle. Unfortunately, the hooks that are used are generally not those provided on the belts, but rather entirely different ones that are misused and simply hooked in wherever they can be accommodated. We would appeal to officers who perform inspections not to throw the baby out with the bathwater when assessing loads. Of course, this is not a load-securing point, even if it has been used as one, and it is correct to observe that the load on this belt hook is not acting precisely and exclusively on the shoulder of the hook. Nevertheless, this hook and belt will do their job and contribute towards securing the load provided that they have been used sensibly. The only unfortunate thing is that this belt hook is fitted with a special safety flap that does a wonderful job of ensuring that once the hook has been attached to a suitable load-securing point, it cannot be unhooked inadvertently. However, if this hook is misused in this way to secure the load using the stanchion pocket (which really cannot be regarded as the fault of the driver), this flap will be bent and will no longer be able to fulfill its otherwise useful function. 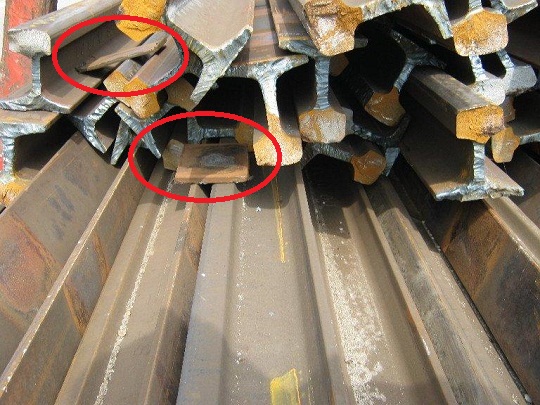 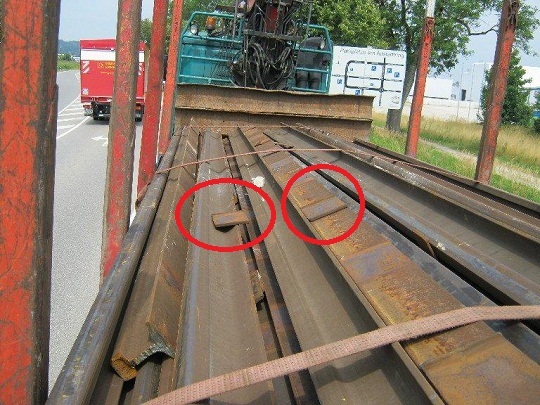 Moving on to Figures 9 and 10, this load securing columnist is starting to become rather more agitated. It is not just that this consignment was loaded without a great deal of thought; it actually shows a total disregard for the welfare of others. We have circled the steel plates that are lying loose on the rails in red. These can easily shift down to the side, and certainly towards the rear. If they dropped from the vehicle, they could wreak havoc with oncoming or following traffic, with potentially fatal consequences. 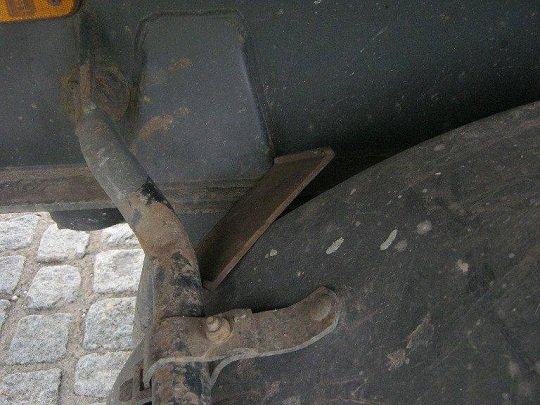 Figure 11 fills us with unbridled fury at the complete lack of respect for human life demonstrated when loading this consignment. One of these steel plates appears by chance to have become jammed between the vehicle’s mudguard and its mounting. This appears to indicate clearly that this plate has either already slipped from the stack in an attempt to drop onto the road or that it fell from the stack of rails during loading. If it came to a charge of manslaughter, the judge would undoubtedly place the responsibility firmly on the shoulders of the driver and the loader. The court would undoubtedly consider very carefully who should bear the responsibility for this casual carelessness, and we are certain that one or more perpetrators would be found. 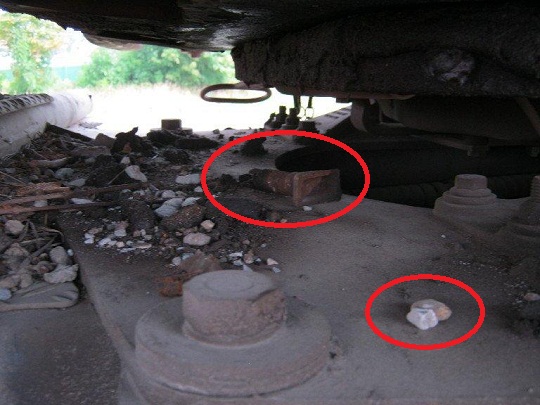 As the final crowning glory after the photographs we have seen already, we should like to draw your attention to Figure 12. In this photograph, you can see stones, thick steel bolts and a range of other miscellaneous items that can fall into the road during the journey and which absolutely nobody wants to see landing on their hood or windshield.

If we ignore the catastrophic carelessness with respect to the stones, bolts and especially the steel plates that are lying around loose on the vehicle, the first thing to think about is friction. After all, the basic approach to loading this consignment was to load it as a tight fit to the front and to the sides. Ignoring the fact that either the end wall was not wide enough on the front right or the stanchions protruded too far to the right, securing a heavy load such as this in this way is undoubtedly a good choice. But what about the way in which the load is secured to the rear?

Our good readers will forgive us if we do not actually take the tie-down lashings into account when performing the calculations for securing this load. In this case, we have to talk only about friction. Of course, it is true that rusty steel exhibits far more friction than polished steel. And these rails are rusty. But we need a securing force of 0.5 g to the rear. Is the rust on the rails sufficient? In all probability it is not. Our conservative estimate of the coefficient of friction for these rails is between 0.2 and a maximum of 0.3. Unfortunately, no empirical values are available. This means that it is fair to ask whether it is not possible to secure this load from slipping backwards as sturdily as has been done at the front of the vehicle. We cannot immediately think of a more sensible way of securing the load than as a tight fit.

What steps can be taken to secure the load in this way? To start with, the rails must be loaded onto the vehicle in neat layers. This is the only way to ensure that the surface of the load is flat. Since it is clear that the rails were torch-cut and snapped, it would therefore have been perfectly possible to cut them all to the same length to create a flat end to the load at both front and rear. If the rails are of different lengths, the short ones should be loaded as a tight fit to the front and at the bottom, with the longer ones stacked on top. A flat load surface makes it easy to construct an artificial end wall. Extremely sturdy wooden beams as seen in Figure 2 must be used to construct an end wall in this way. These beams can then be placed directly against the load and secured using belts and chains. Alternatively, two sleeves can be constructed (e.g. from the ends of pipes whose diameter is greater than the stanchions and which can be slipped over the stanchions to act as guides) and joined to a steel sleeper, as was used to fabricate the end wall. The "artificial" end wall can then be slipped over the closest pair of stanchions. This will ensure that no part of the load escapes from the vehicle.

It is often the case that loads are treated according to their value. In this example, the load is scrap. Sadly, the word "scrap" often conjures up the idea of destruction, trash and waste. But that is wide of the mark. This scrap is not only very valuable, but the considerable weight of this collection of rails also represents a significant hazard. Up to now, trains have braked on these rails, but how do the rails know when to brake or accelerate unless friction or the measures taken to secure the load to the vehicle pass on this information? Any load can represent a hazard, particularly "scrap" that is so heavy, sharp and valuable as these steel rails.

Have a safe journey!
Your load-securing columnists