The battle of the bulge

Truck-trailer combinations or articulated trucks that are somewhat wider than usual are not a rare sight on the roads. Sometimes, the vehicles have been deliberately loaded in this way in order to increase the volume of the load. And an increase in volume corresponds to an increase in profit.
But that tends to be a rare exception.

It is more often the case that the vehicle becomes wider during the journey as a result of the load.
Why does this happen? What precautionary steps can be taken to ensure that it does not happen? We shall try to answer these questions in our Photo of the Month, November 2012. 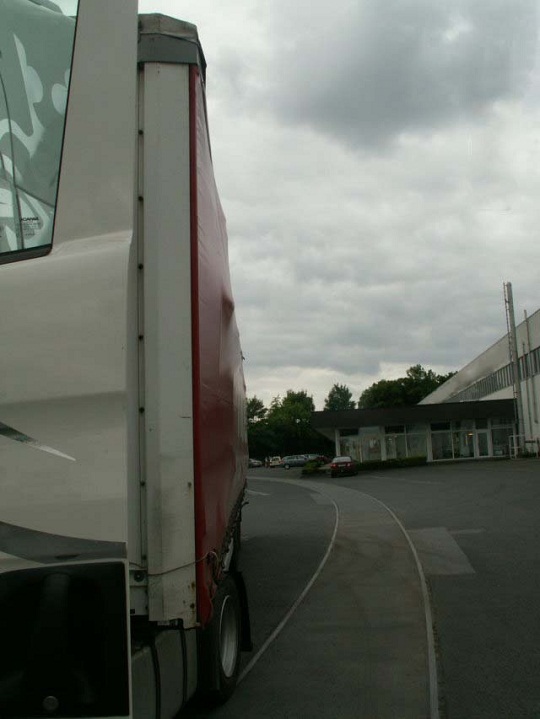 Figures 1 and 2 clearly show that the semitrailer (in this case a standard curtainsider) has bulged out on both sides. One’s initial suspicion is that the load has slipped. The police stopped this articulated truck in order to verify this assumption.

The driver has to open the rear doors to allow the officers to inspect the load. 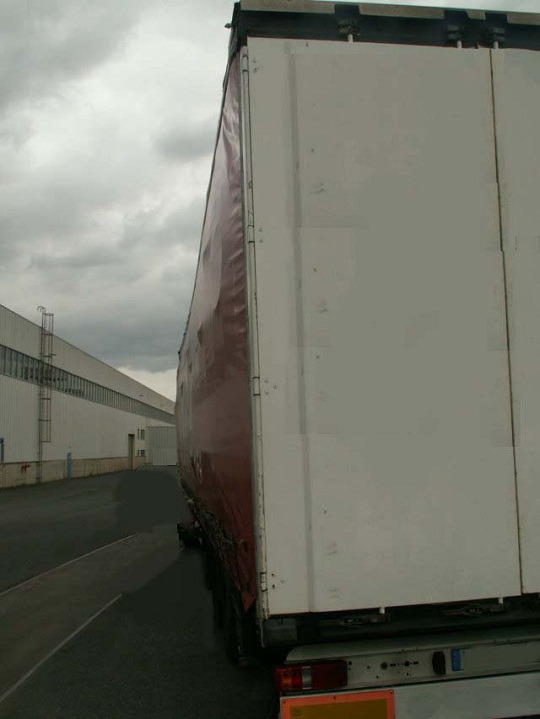 Figure 3 confirms the suspicions of the police officers that the load has become wider. The entire semitrailer is loaded with tires amounting to a total weight of approximately 15,000 kg. In the trade, this loading method is known as "lacing".
The advantage of this loading method is that it optimally exploits the space available. There are very few gaps between the tires. 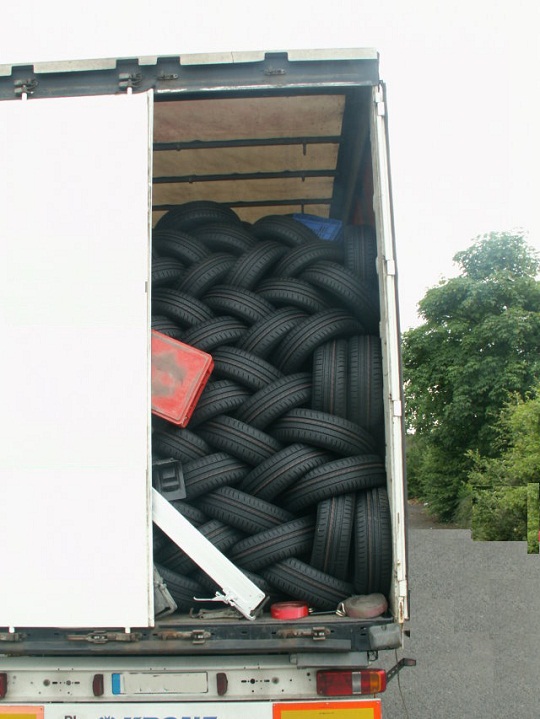 The disadvantage of this loading method is that the load tends to separate during the journey. Because the vehicle in this example is a standard curtainsider, the load-securing effect of the sides, namely the tarpaulins and the side boards, is negligible. The tarpaulin is intended to provide protection from the weather and offers no rigidity to prevent the tires from moving sideways. 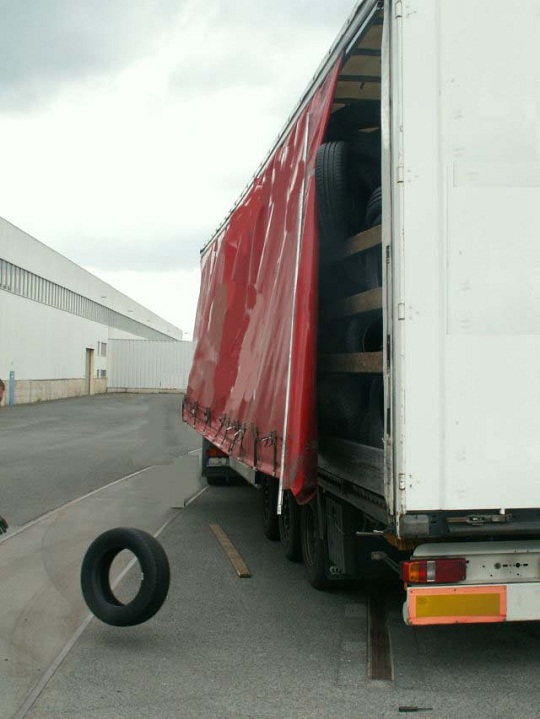 Figure 4 shows the left-hand side of the curtainsider being opened. It is not hard to see that a tire is actually falling from the vehicle. Figure 5 shows other tires that have already fallen and one that is still on its way. Even though the load is not particularly heavy, the driver exposing the load is at considerable risk.

It is not without reason that the relevant German trade association has drawn up accident prevention regulations (BGV D 29) stipulating that vehicle bodies must be constructed in such a way that the load is, or can be, secured against slipping, rolling, tipping or falling from the vehicle if the vehicle is used as intended. If the load cannot be secured by means of the vehicle body alone, additional load-securing facilities must be present (§ 22). 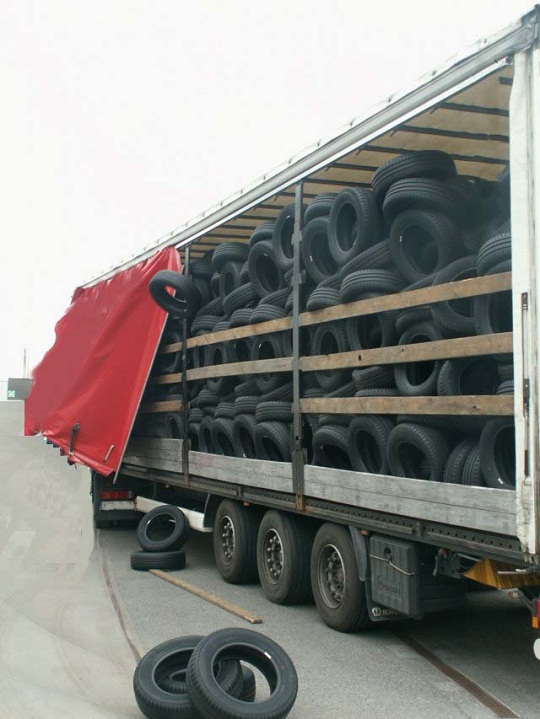 In § 37 (3), the trade association further stipulates that vehicles must be loaded and unloaded in such a way that people are not at risk of injury by objects falling from the vehicle, tipping or rolling away. 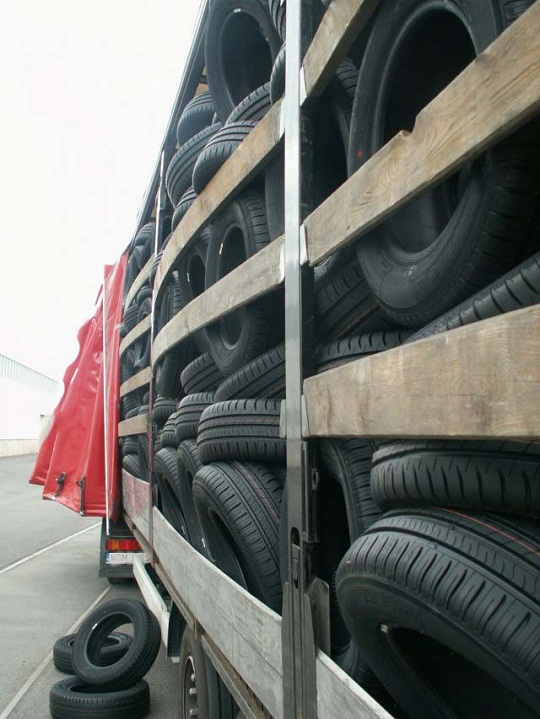 Quite clearly, none of this is the case here. In this example, the body of the vehicle is not able to provide a secure tight fit for the load, neither are other means of securing present to prevent the tires from moving.

The total weight of this load of car tires is approximately 15,000 kg. The tires are resting on the loading area almost unsecured. The fact that the tires have moved during the journey and slipped into the tarpaulin is indicated by the fact that the vehicle has actually become wider.

According to the German road traffic licensing regulations (StVZO), vehicles must not exceed a maximum width of 2.55 m (2.60 m for refrigerated vehicles).
In this case, the tarpaulin has bulged to such an extent that the overall width of the vehicle is almost three meters. This is almost a half a meter too much.

Overwidth vehicles require special dispensation before they can travel on the roads. Such dispensation is only granted, however, if the load cannot be divided. This is clearly not the case here.

Which means that there is only one solution to this problem:

The cargo must be unloaded and reloaded onto a suitable vehicle. This demands patience, because the cargo can generally only be unloaded by hand at the current location of the vehicle. A lot of time is lost; time which carriers can ill afford nowadays.

Always load tires in transport racks, which are then simple to load and unload. These racks do not become wider during the journey and the tires are safely stacked in the racks. The racks can be stacked as a tight fit in the same way as mesh crates.

The three figures below illustrate ways of using racks for transportation: 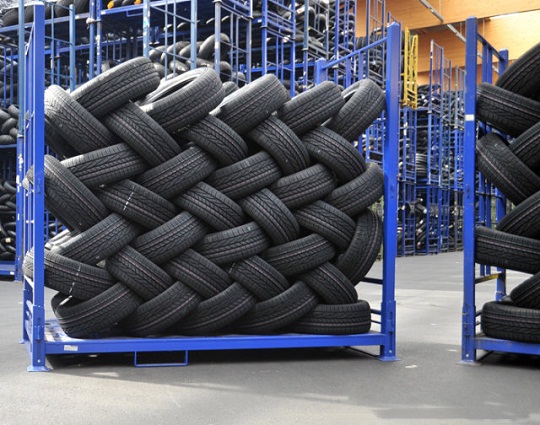 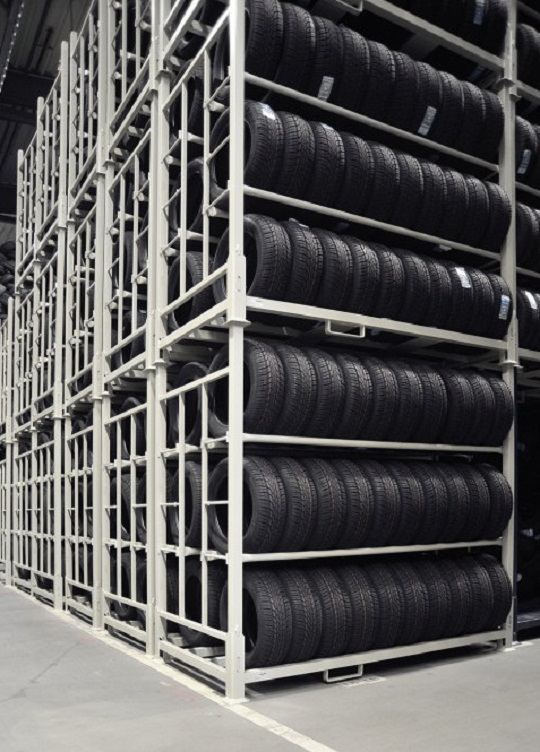 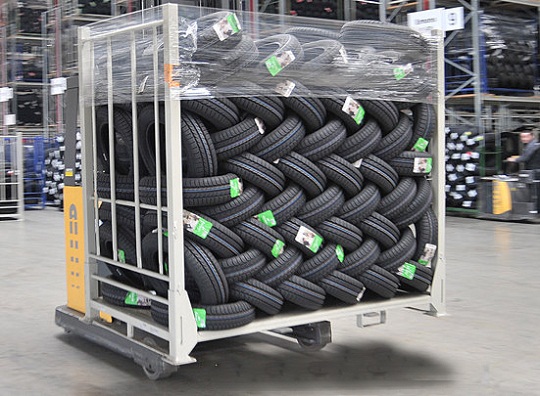 If these suggestions are followed, the transport will raise no concerns and the load will arrive with its recipient (generally in the automotive industry) on time and without any damage. This is easier on the nerves, avoids fines and, not least, keeps the roads safe.

Have a safe journey!
Your load-securing columnists