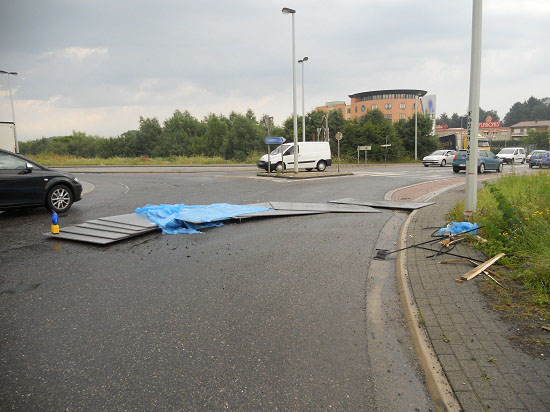 As a load-securing columnist, there are two major issues that crop up again and again:

Firstly, the weight of the load, or more specifically the seemingly intractable misconception that heavyweight loads more or less secure themselves;

and secondly speed, or rather the myth that loads that will be traveling at high speed require a lot of securing, and conversely that those transported at low speeds require very little in the way of securing. There are even some people who believe that if they drive carefully, they needn’t bother to secure the load at all.

Now a nice Belgian roundabout has always been an excellent test of how well a load has been secured. Figure 1 shows the scene where a load has failed to pass this test. The story of this mishap is quickly told. Both the above issues probably had a hand to play here: the load was heavy and the speed was not particularly fast, since a roundabout is not generally negotiated at top speed, but at 25 or 27 km/h at most. But anyone who has ever spent any time standing beside a roundabout will have heard tires grinding, especially on heavily loaded trucks and trailers – a typical sign of lateral acceleration forces being generated. 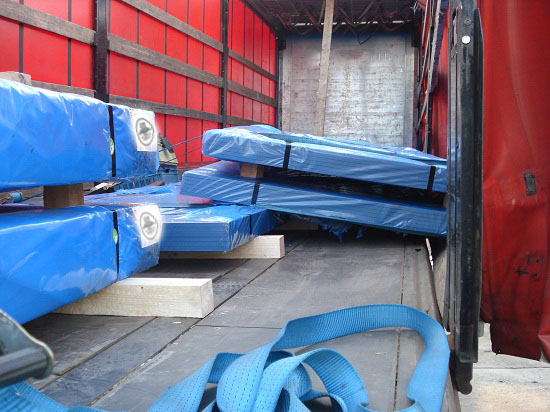 Since this load was obviously not lying on anti-slip material made of rubber (unlike the vehicle’s tires on the road), there was naturally less friction between the load and the loading area. So the inevitable happened: driving around the roundabout generated lateral acceleration, the friction on the loading area was quite simply pathetic and the heavy load parted company with it. Mercifully it only landed on the road and, apart from tearing a large chunk out of the asphalt, no great damage was caused other than to the load itself. 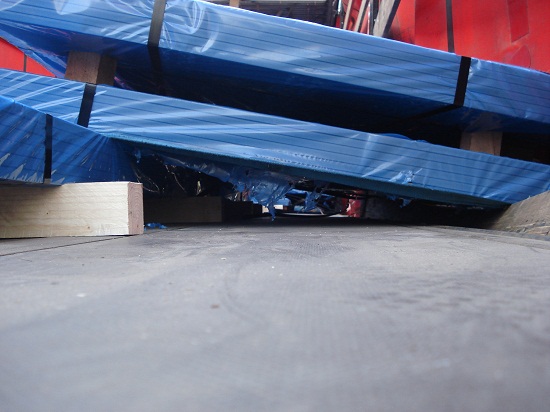 Looking at the loading area, you can really only shake your head in disbelief. The load consisted of steel sheets several centimeters thick, wrapped in plastic film, stacked on top of one another, and secured by means of two tie-down lashings in each case.

As to the wood under the load, it’s enough to send shivers of horror up your spine. True, squared lumber with a slightly rectangular cross-section has been placed under some of the load. But it is standing on end! For donkey’s years this column has been preaching that dunnage should always be squared, i.e. have a rectangular cross-section, so that if the worst comes to the worst, it will not roll, but simply remain lying there. But a rectangular beam standing on edge will tip forward or backward with the slightest acceleration. As soon as the lumber has tipped, the pre-tensioning force, which in this case was already pretty ineffective anyway, is equal to zero.

The only elements placed between the upper sheet steel packages are wooden blocks. These blocks are more or less cube-shaped so they consequently allow the load to roll not only in a longitudinal direction, but in a transverse direction too. And by the look of things, the load took every advantage of this opportunity and not only slipped, but also rolled over the wooden blocks. 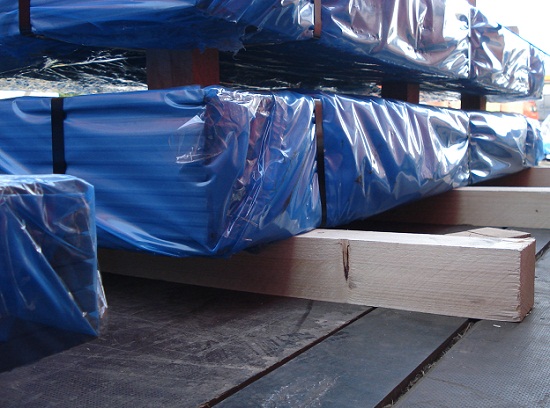 Figure 4 shows the rectangular cross-section of the beam which can easily tip in the longitudinal direction. This makes the load "smaller" and immediately eliminates the pre-tensioning force. The blocks used under the second layer that are able to roll in virtually all horizontal directions are likewise a sight to behold. Not to mention the gaps in the load at the front and the side!

The load was heavy, the truck drove around a roundabout at low speed, and consequently lateral acceleration forces were generated which were sufficient to get the load to part company with the loading area.

Dunnage should always be of a rectangular format so that the load cannot roll on it. But these rectangular planks must be placed flat, not standing on end!!!

If the load is wrapped in plastic film and there is consequently virtually no friction, the load securing method chosen must be based on direct securing, never on the use of tie-down lashings to increase friction. Placing anti-slip materials underneath would also be wrong in this case, since the packaging (the plastic film) would not be able to transfer the friction effectively to the load unit.

As always, gaps in the load are the worst enemy of good load securing, so you should try to create a tight fit, at least against the end wall. A tight fit can be achieved by filling in gaps or packing the units tightly against one another. If the load is too delicate, place a pallet or other robust piece of lumber in between, and make sure that this lumber cannot tip or fall out, to ensure a tight fit against the end wall to the front. Naturally, you must first check that the end wall will not be overloaded and whether the vehicle can support the respective load distribution. If the end wall is overloaded, or if some of the load needs to be placed further back for load distribution reasons, you will need to create a gap in the load. Like the remaining load to be secured, this gap in the load can easily be secured with loop lashings. To the rear, to the sides and also to the front.

And finally, to perhaps also state the obvious in this column, we should point out that sheet steel can have sharp edges and that belts have a tendency to suffer from such sharp edges. So we would urge you most earnestly to use edge protectors to ensure that the belts enjoy a long and happily securing life.