At times you could believe that we were back in the era of Nicolas Copernicus and Galileo Galilei. These two scientists and philosophers formulated a heliocentric cosmology and were convinced that the Sun, rather than the Earth, was the center of the universe.

Perhaps it is this cosmology that lies behind the way in which these logs have been secured. The belief that the weight of the logs and the clamping effect between the stanchions are able to secure the load seems to be as deeply entrenched as the belief in those days that the Earth was at the center of our "solar system".

Wood is a natural product and always behaves differently from what we expect. Many trials carried out with wood in the context of road tests have provided ample evidence of the heterogeneous nature of wood. But the undeniable conclusion of all these tests is that the laws of physics do not cease to apply when confronted with logs. And many of those who took part in the tests have learned a considerable amount and have together drawn up the loading recommendations for logs, whether loaded laterally or longitudinally. Here are the links to the recommendations. 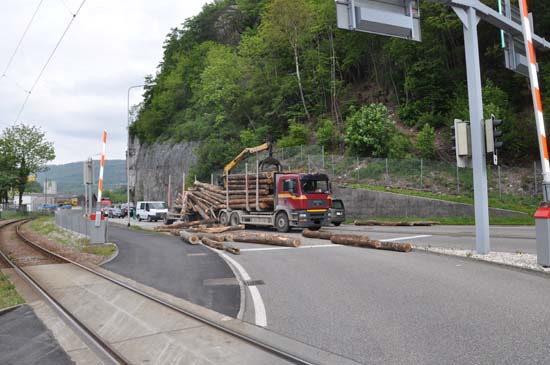 This figure shows a truck and trailer combination that came to grief when braking at a set of traffic signals in Switzerland. The sequence of events leading to the accident is commonplace and quickly described: The driver of the truck thought that the car in front of him would cross the lights on amber, but the car driver preferred to obey the rules of the road and braked. This meant that the truck, with its load of logs, had to break rather more sharply to avoid colliding with the car in front. Although the collision was successfully avoided, the securing of the load proved to be rather less successful. This meant that the load slipped on both the truck and the trailer. It would appear that the logs on the trailer slipped forward considerably, with the result that they were able to fall onto the road on both sides of the vehicle. At this time, the traffic signals were still showing red for the oncoming traffic. This meant that no vehicles were approaching on the other side of the road, and it is only thanks to this that no third-party was harmed in the accident. 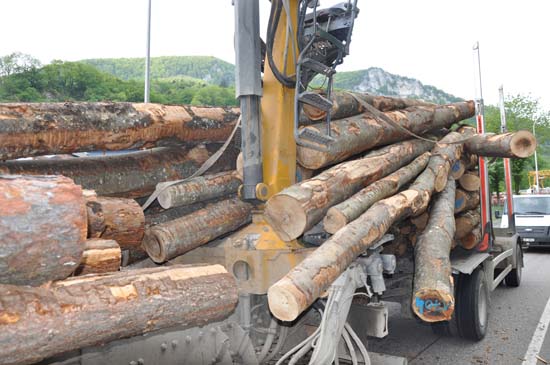 The load on the trailer was primarily made up of beech logs with bark. Most of the load slipped forwards to the truck, where it was stopped by the crane or the vehicle and its load. It was only to the side that some of the logs were able to escape onto the road. If you put yourself in the position of an oncoming vehicle, a 4 to 5 meter beech log like this is a hazard to be reckoned with. And in the event of a collision, such a hazard would prove to be massively destructive. 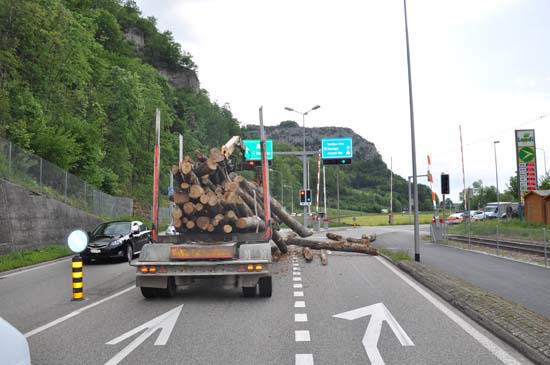 So where did the driver go wrong?

Let’s return to the title of this Photo of the Month and to the superstition about the physics of mass. So often, we hear the same thing during truck inspections: "It’s so heavy, it won’t be able to shift." But this is only one aspect that has led the practitioners astray. Logs have a relatively rough surface, and hence good friction characteristics. In addition, logs do indeed clamp themselves between the stanchions as a result of the opening angle. This is simply a result of the geometry of the logs. If you place two round pencils next to each other on a desk so that they are touching, and then place a third exactly in the middle, the bottom two will roll apart. This is the opening angle generating lateral forces in addition to the friction forces and weight forces. And because this is so, this trio of weight force, opening angle and the superstition that heavy weights secure themselves pretty well counteract the gut reaction of a driver. Not only that, because it is a natural product, wood almost always behaves differently than expected.

This was the inevitable conclusion of all the representatives of the institutes in Germany who were involved in drawing up the recommendations for loading and securing longitudinally loaded logs (up to 6 meters) for transportation by road.

But after the conclusion of a series of large-scale trials, it was nevertheless possible to develop, agree and publish these recommendations with a clear conscience. As a general principle, we can say that logs require far less securing force than, for instance, a wooden crate of the same weight on a loading bed.

At one point, the recommendation referred to above states that at least two wedges or toothed strips must be present laterally on the bed of the vehicle / bolster, and that these must be shaped in such a way that they secure the bottom layer of logs as a tight fit.

The bolsters clearly did not comply with this recommendation. According to the Swiss Police, these wedge strips were so low (only a few millimeters) that they were unable to penetrate deeply enough into the bottom layer of logs. As shown in Figure 3, the entire stack of logs has slipped forwards. This means either that the fit was not tight enough because the wedges were too low or that the tie-down lashings did not exert sufficient pressure so that the logs could "climb over" the wedges. A combination of both causes is also possible. 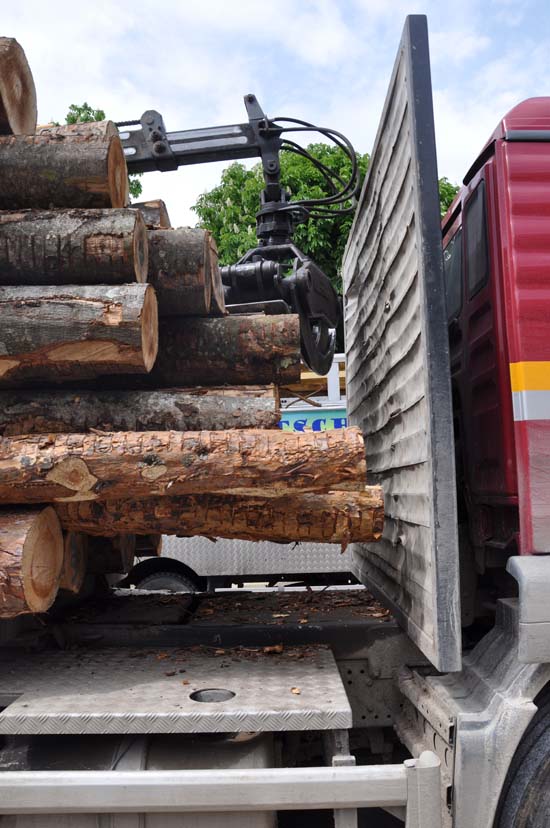 The end wall of the truck shows considerable signs of wear and tear, indicating not only that transporting logs is no delicate operation but also that the sturdy construction of the end wall is capable of stopping any logs that come free of the stack despite the load securing measures taken. According to the recommendation, logs should always be loaded in such a way that if any single log slips forward to the end wall, it should always be restrained by at least two stanchions to prevent it from falling from the vehicle at an angle to the left or right onto the road. Although the logs on the truck have slipped, they did not slip very far, and the services of the end wall were not required. 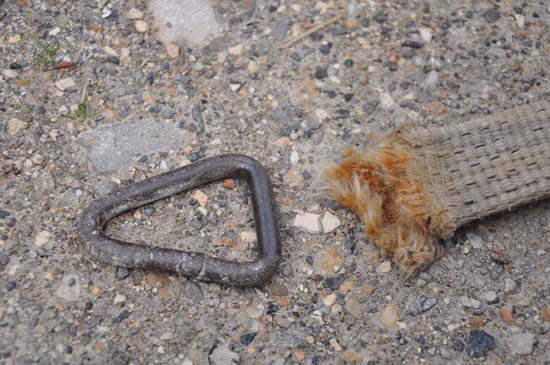 You frequently see considerable signs of wear and tear on the securing equipment used for transporting heavy loads such as logs, concrete or steel. It is often the case that more than 50% of the belts used are fit for scrapping. On the one hand, this might seem easy to understand, because the materials are easily damaged in this rough working environment. But the correct approach would be to choose load securing equipment that is able to withstand the stress involved or to protect the relatively delicate belts from the rough environment, for instance by using protective sleeves.

The measures taken to secure the load:

Two tie-down lashings were used on the trailer. The belts probably had an LC of 2,500 daN (the labels were no longer legible). The triangular ring shown in Figure 5 had become detached from its belt. The tear damage clearly indicates that something like 50% of the tear had already occurred before the accident. The regulations regarding the inspection of load securing equipment state that if 10% of the warp threads of the belt have been damaged or broken, the belt must be scrapped. This is most certainly the case if 50% of the threads are torn. This belt was therefore of no use whatsoever.

A table is included as an appendix to the Loading Recommendations mentioned above. This clearly shows how many lashing belts are to be used for various quantities of logs. This table takes account of the various characteristics of the different log types. What are known as "reduction values" were determined during the course of trials. These reduction values take account of the fact that the opening angle effect causes a log to jam between other logs, thus achieving a significantly higher reduction value / coefficient of friction than normal lumber. For a load of hardwood weighing 12 tonnes, the recommendation states that nine or eight belts with a pre-tensioning force of up to 500 daN should be used. The first column of the table takes into account the percentage of the load that is secured as a tight fit on the bottom bolster. This depends on the diameter of the logs. In the case we are considering, only 10% or at most 15% of the logs would be secured as a tight fit, insofar as an effective tight fit was achieved at all. The trailer was carrying a load of 14.4 tonnes. At least 10 belts with a pre-tensioning force of 500 daN should therefore have been used to secure the load.

As load securing columnists, we constantly ask ourselves why the vehicles are not equipped in such a way that securing the load is made as easy as possible for the driver. One could either equip trailers with an end wall made up of a coarse mesh or fit the bolsters with load securing points with an LC of 5 or 10 tonnes. To these securing points, you could then attach either sturdy belts with protective sleeves and pre-tensioning devices that are worthy of the name (in the context of the pre-tensioning forces that are used when transporting logs) or chains with wire rope ends and pre-tension them to a considerable force using winches or spindle tensioners, or perhaps even a combination of both. This would allow sufficient pre-tensioning force to be achieved using just two or three items of load securing equipment.

We are often confronted with the argument that their weight makes chains very difficult to handle and that it is not possible to simply throw them over the load. The answer is twofold. Firstly, high-strength chains that are far lighter than they used to be are now commercially available. Secondly, it is possible to attach a rope to a chain using a carabiner, to throw the rope over the stack of logs and to pull the chain over the load using the rope. But at this point, we expressly remind you that everybody can and must make this decision for themselves and has to find and use the best possible securing equipment for their own load and their own vehicle. Personally, we would not want to lash this relatively compact load stack down with 10 belts with a pre-tensioning capacity of 500 daN each. It would simply take too long.

The load securing columnists wish you all a safe journey every time!