This truck and semitrailer turned up at a truck inspection loaded with 26,700 kg of steel reinforcing mesh. It is something of a miracle that there was no accident on the trip of around 270 km up to the inspection point but, as we know, miracles happen. 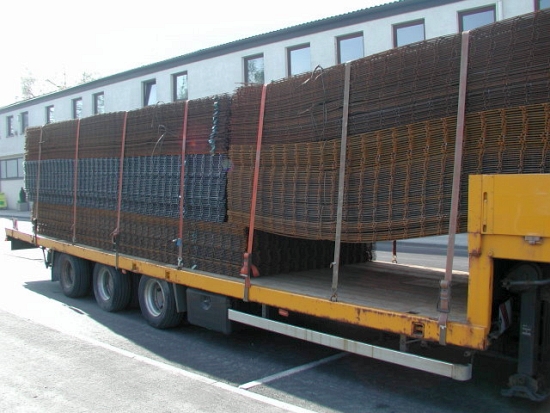 The driver was also responsible for loading the vehicle and had decided to use tie-down lashings. In doing so, he placed the ratchets of the 8 lashing belts that were used on alternate sides of the vehicle, presumably in order to evenly distribute the friction loss resulting from the deflection of the belts. 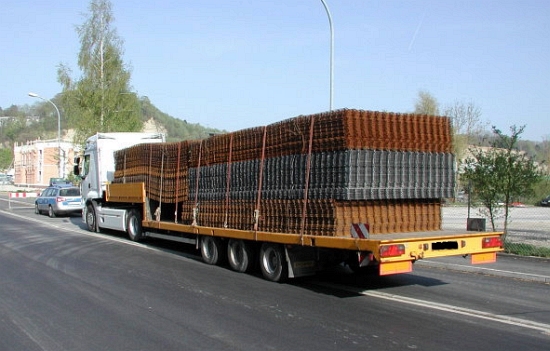 Some of the labels on the belts were still present and readable, and showed that they had an LC of 2,500 daN and an STF of 300 daN.

We shall ignore the fact that five of the ratchet tensioners and eight belts no longer had any labels and should not have been counted at all. We shall make the assumption that all the belts that were used were as new and were lashed down at an ideal angle of 90°. Furthermore, we shall assume that 50% of the pre-tensioning force was able to act on the side opposite the ratchet tensioner. Only if we make these assumptions do we have an overall pre-tensioning force of around 3,600 daN (8 x 450 daN).

How much of this can be taken to be actual securing force depends on the level of friction between the load and the loading surface. To make things easier, we shall consider the individual packages of steel mesh as load units, although this is seldom true in practice.

We shall use a small table to illustrate the total number of belts needed to adequately secure the load (depending on the actual level of friction): 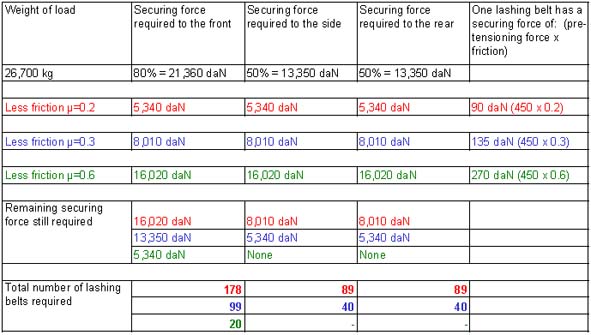 In this case, the coefficient of friction µ is considerably lower than 0.6, so the table clearly shows that this load cannot be secured using tie-down lashings. 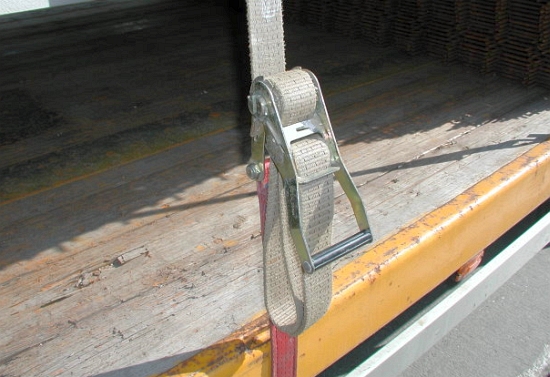 Even from a purely economic point of view, it is simply not possible to secure this load using tie-down lashing belts alone. There are insufficient lashing points available and so many belts would be needed that it would be almost impossible to see the load. The were no stanchions to provide support to the sides, and the mesh was not loaded as a tight fit to the end wall (see Figure 4), which was only around half a meter high. If the worst came to the worst, the load would have had an unobstructed path to the driver’s cab. 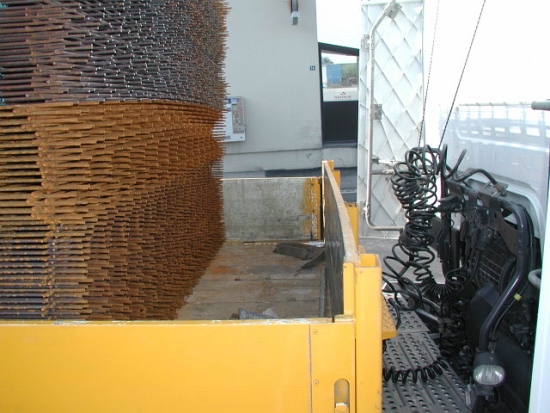 
Taking all of this into account, you have to reach the conclusion not only that the load was inadequately secured, but also that the vehicle was not suitable for transporting this load. There are not enough lashing points on the loading area and no stanchions are present, nor can they be fitted, because there are no sockets. This makes it impossible to establish a tight fit.

So how can this load be secured correctly?


There are several places that describe how to transport steel mesh safely, including VDI 2700, Part 11.


If the vehicle does not provide any opportunity to achieve a tight fit, wire ropes can also be used to secure the load. These wire ropes have a large loop at one end, and this can be placed over the corners of the steel mesh stacks, thus providing the option of securing the load directly. Direct lashings of this type can be used to the front, to the rear and to the sides.

The best securing method, however, is that which is effectively offered by the vehicle itself in the form of removable stanchions. When securing the load, it is then not necessary to climb onto the loading area or onto the load itself. Instead, the load can be secured from the safety of the ground.