On a knife edge


Loads made up of steel goods provide rich pickings for a load-securing columnist. This is not because steel is loaded and secured particularly badly, but rather because steel loads generally demand a great deal on the part of the person responsible for loading and then securing the load. So, in this photo of the month, we shall take the opportunity of drawing attention to a variety of different mistakes that can be made and at the same time make the right recommendations. 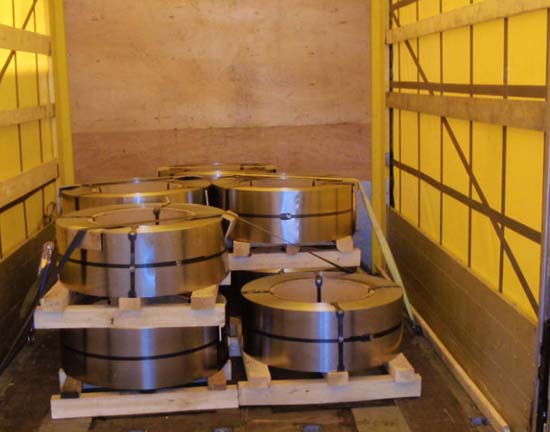 This vehicle was on the road with an initial load of approximately 4.5 tonnes of split strip coils on skids and pallets. We are unaware of how far this vehicle had already traveled, but the company that was due to add their load to the vehicle was dumbfounded by the carelessness with which the existing cargo had been loaded and secured.

Even something as elementary as load distribution seems to be a problem here. The split strip coils have been placed hard against the end wall. This is advantageous if you are looking for a tight fit and know how to use it. But if you imagine a load distribution curve in which 4.5 tonnes have been placed on the front 20% of the loading area and the rest of the loading area is completely empty, this presents a problem. 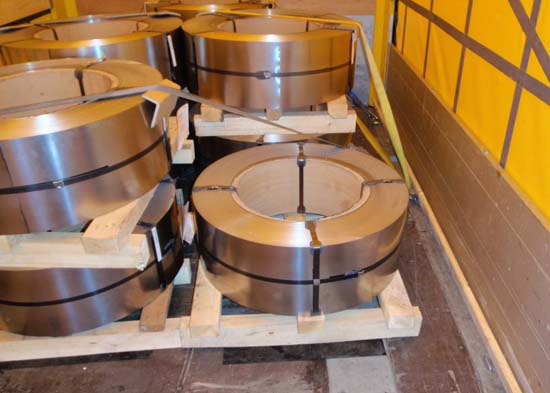 The problems become even more apparent the closer you get to the load. The steel strip is wound around a core, which is probably made of relatively stable paperboard, and the coils are held together with steel straps. So far so good. One positive aspect that should be stressed is that the steel straps are protected against the sharp edges of the steel strip and vice versa. Less care was taken when attempting to create a load unit. Although "less care" is somewhat of an understatement. The load has simply been placed on "skids". These are made up of three pieces of squared lumber on which three planks have been nailed in such a way that these split strip coils can be loaded on them. In this example, the split strip coils have been positioned on the skids and the skids are dimensioned in such a way that it was difficult or impossible to load them efficiently as a tight fit.

Underneath the skids, we can see friction-enhancing mats, which is always a good thing, although the way in which they have been positioned leaves a lot to be desired. If the vehicle is subject to lateral acceleration forces, the skid can tip to the side (particularly if the load is stacked) and make direct contact with the loading area. At this moment, the good friction provided by the rubber can no longer act along the entire length of the skid, which means that it can no longer be guaranteed that the good level of friction provided by the anti-slip mats will take effect. This means that the high coefficients of friction can no longer be used when performing load-securing calculations.

So what can we do to improve matters? The best approach would be to place anti-slip mats with a thickness of 8-11 mm under all four corners of the skids in order to completely isolate them from the loading area in respect of friction. It makes sense if the anti-slip mats protrude beyond the edges of the squared lumber in order to ensure that the skids are completely isolated from the loading area in terms of friction at all times. If the high weight of the load causes the skids to bend in the middle so that there is a risk of the squared lumber coming into contact with the loading area, it makes sense to also place anti-slip materials under the skids in the middle.

Although any attempt to increase friction values is thoroughly laudable, the efforts made in this example can best be described as half-hearted. The steel load itself stands directly on wood (the skid), and the second layer of split strip coils also stands directly on wood. If acceleration forces act on the load, it would slip from the skid, which itself would remain firmly in place thanks to the good friction values. The load-securing effect of the rubber is zero.

So how can we improve this situation?

There are two alternatives: Either the split strip coils should be strapped to the skids on all four sides with steel straps or anti-slip mats should be placed under the coils on the skids. The second layer of the load must also be placed on anti-slip materials in order to avoid breaking the "friction chain". Only in this way is it possible to achieve a level of friction that makes securing the load significantly easier. As the pictures at least suggest, a closed friction chain would justify the attempt to secure the load using tie-down lashings.

If you look at the top left coil, you can see that the edge protector is becoming detached from the coil and the belt is in danger of giving up the ghost on the razor-sharp edges of the split strip. In the case of the bottom right coil, the lashing belt in the foreground passes right over the sharp edge of the split strip, with the result that it will be fit for scrapping after this journey or, if the load is subject to acceleration forces, i.e. if the coil slips, the belt will immediately be sliced in two. 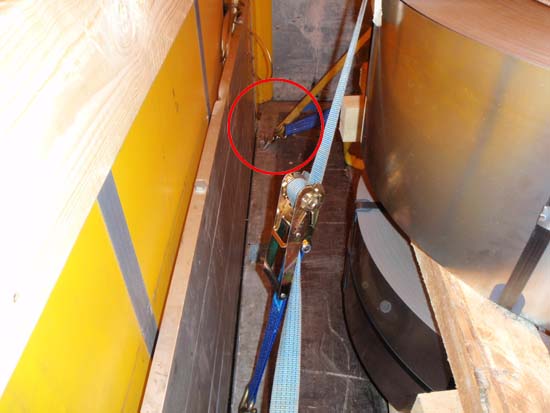 This figure clearly shows how the top coil is simply placed on the skid. The skid is not attached to the coil with the steel straps used for packaging the coils, nor is there any friction-enhancing material under the load. You can also see that the top coil has already slipped on the skid, either when being transported by forklift truck or when being loaded or during transport on the truck. There is undoubtedly no need for us to stress at this point that it makes little sense and is most certainly not effective to secure a load that has been loaded in this manner and where the load units have been formed so poorly using tie-down lashings. 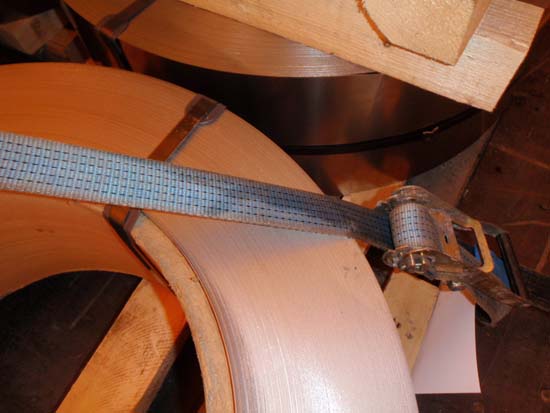 Figure 4 shows the bottom right coil with the belt in the foreground that we have already discussed. The point at which the belt is likely to fail can be clearly seen, and regular readers of this column will undoubtedly be shaking their heads in horror. 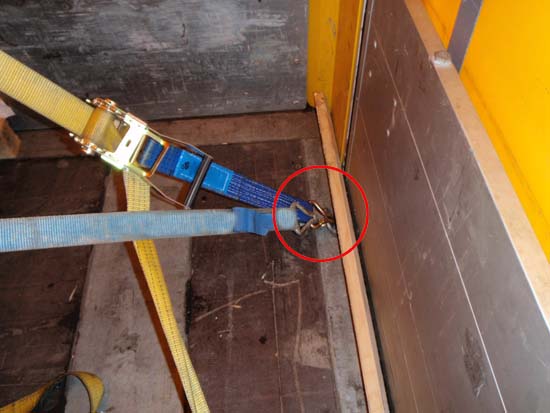 As if it were not enough that the measures taken to package and secure the load were hardly exemplary, those responsible showed a truly "inventive" streak in some of the details. Figure 5 shows that the belt has been hooked into itself. Because there was no further suitable load-securing point available at the correct location, the hook of the tensioning element was used as a load-securing point instead. Even though this approach appears obvious, it makes no sense whatsoever, as the hooks are not designed to be loaded in this way. 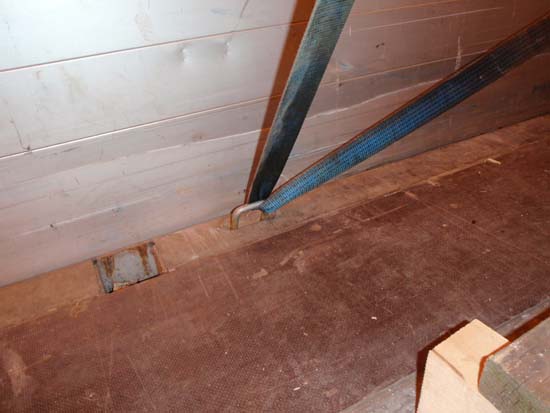 This figure shows the same belt as Figure 5 on the other side of the vehicle. The only positive aspect that we can see here is that the person responsible for securing the load presumably intuitively felt that the way in which he was currently doing it was inadequate and wanted to try to make the entire business a little safer. Even though lashing belts are generally easy to handle, they do not take well to being pinched as a result of threading them through the load-securing point as shown in this example. This only serves to reduce their lashing and securing capacity.

So how should a load like this be packaged and secured correctly?

One option is to secure the split strip coils to the skids using steel straps, thus forming a load unit. This also demands great care. For instance, the straps that run under the skids themselves must run in grooves to prevent them from being damaged when the load unit is lifted, moved and put down again with ground conveyors (e.g. forklift trucks). The size of the skids should match the coils so that they do not protrude and are flush with the edges. In other words, the split strip coils neither protrude beyond the edge of the skid nor are they placed inside the edge of the skid, with the result that both skids and coils can be loaded as a tight fit. Only in this way is it possible for the elements of the load to support each other and be secured by the resulting tight fit. If for any reason the elements of the load are not permitted to support each other, even greater attention must be paid to attaching the skid to the coil using steel straps if the load is to be secured by achieving a tight fit between the skids.

If the split strip coils are not secured to the skids using steel straps, it is also possible to load them onto the skids using anti-slip materials (which should be fully vulcanized so that they are not damaged too quickly). Of course, stacked skids should also be placed on anti-slip material. This material should also be fully vulcanized. When a good level of friction such as this is established, the load can be secured with tie-down lashings or by passing loop lashings through the eyes of the coils.

Extreme care must be taken to ensure that the edge protectors are placed in such a way that they cannot, under any circumstances, slip off. Protective sleeves over belts and possibly the additional use of edge protection materials are urgently recommended.

With kind regards from the load-securing columnists