… not thought through to its proper conclusion


In this column, we frequently discuss cases where the load securing is so woefully inadequate that it represents a hazard to the vehicle, to the driver and to all other road users. Some of these cases prove the point, as an accident has resulted.

And this is what has happened here.

But this case is nevertheless something special. It shows up a large number of individual aspects that will cause our readers to roll their eyes in despair, while at the same time illustrating some aspects that deserve praise. Which is why we chose the title "not thought through to its proper conclusion". But the columnist is eager to highlight those aspects which are right in their approach, as they represent the first important steps towards good load securing practice.


And so to the case in hand

The load is made up of prefabricated concrete elements whose shape is very flat and which have a narrow base on one side. 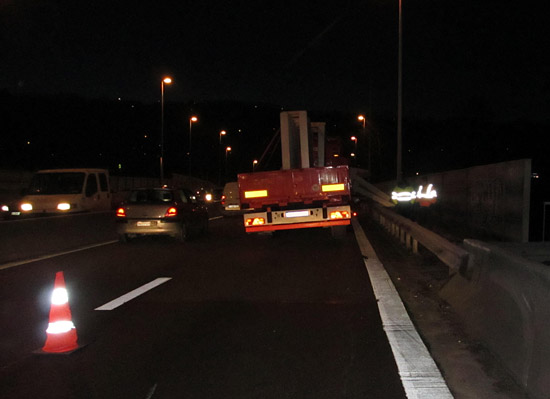 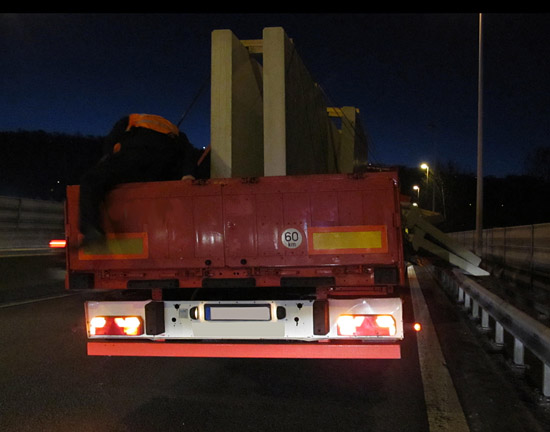 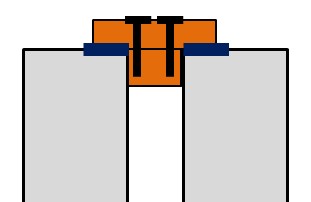 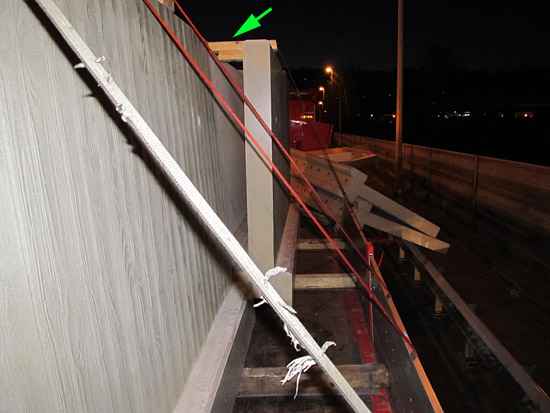 The first thing that catches your eye in the foreground of Figure 3 is the appalling state of the load-securing equipment. Figure 4 shows more. The second thing that strikes you is that the load-securing equipment, all of which takes the form off tie-down lashings, has been attached over the outside of the side walls. Thirdly, the rear spacer inserted between the concrete elements can still be clearly seen on the third pair of elements (see Green arrow). And in the background, you can see the concrete elements that have tipped off the vehicle. You can clearly see how narrow the base of the elements is, clearly illustrating the stability problem. 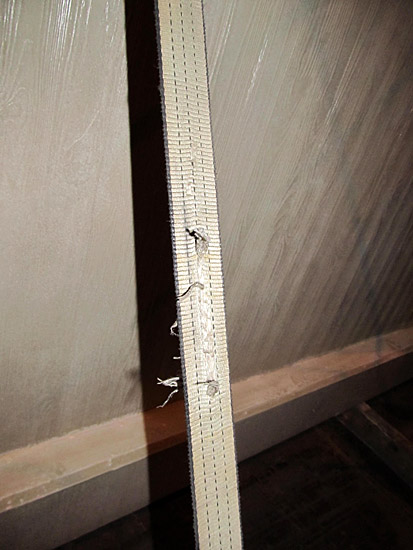 Load-securing equipment which is only fit for scrapping can often be seen on heavy, abrasive loads such as concrete. The corners are often sharp and the material rough, which causes the equipment to wear out quickly. With loads like this in particular, care should be taken to ensure that the load-securing materials used are in top condition, as the weight involved puts the equipment under considerable stress (especially in the case of direct lashings, which are what we generally recommend). Edge protectors or sleeves are indispensable for loads such as this. 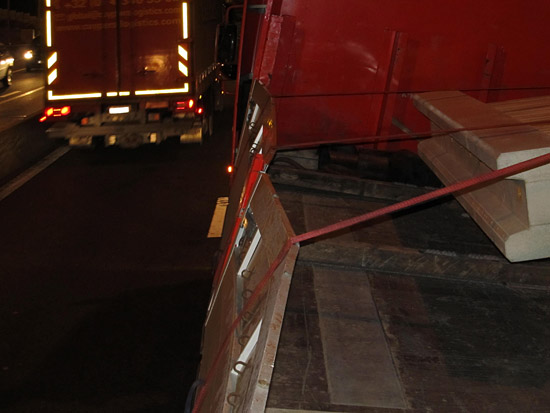 Towards the front left of the vehicle, you can see the tie-down lashings which were not able to secure the concrete elements. The belts passed over the side walls, with the result that it was not possible to generate any effective pre-tensioning force. It can be clearly seen that when a load is applied, the side walls give considerably or even fail completely. This applies particularly in the case of direct lashings. But also in the case of tie-down lashings, the "flexible" side walls are a real handicap when it comes to generating an effective pre-tensioning force. 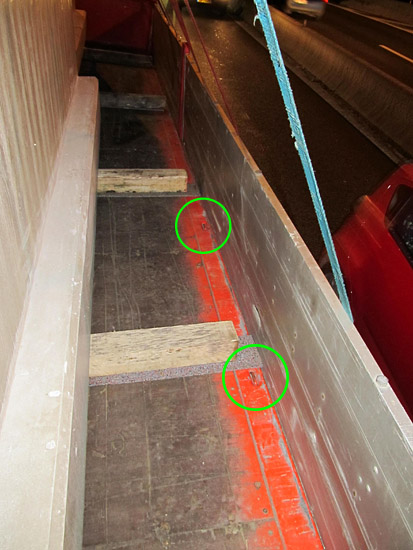 Figure 6 clearly shows the existing load-securing points (circled in green), which appear to be in a perfectly usable state. The condition of the belt in the foreground of this picture once again illustrates the fact that the load-securing equipment used here was fit for scrapping. Another positive aspect, however, that can be stressed is the use of friction-enhancing materials. Anti-slip mats have been placed under the wooden dunnage, and these simplified the task of securing the load. The coefficient of friction μ between rough-sawn lumber and concrete lies between 0.4 and 0.5. The coefficient of friction between rough-sawn lumber and a loading area which shows considerable signs of wear and tear can be assumed to be no more than 0.3 (provided that the loading area is clean and has been swept). This means that the friction-enhancing mats do indeed have an effect. It would have been far better and, indeed, thought through to its proper conclusion if friction-enhancing mats had also been placed on top of the wooden dunnage. Of course, heavy-duty mats would need to have been used when dealing with such weight and the relatively small load-bearing areas.

In the interests of fairness, we should mention that a material had been placed between the concrete elements and the wouldn’t dunnage that resembled over-dimensioned bubble-wrap. We are unaware of whether this was intended to enhance the friction or protect the concrete from damage. If it was indeed anti-slip material that we are unfamiliar with, then we apologize and this aspect was also thought through to its proper conclusion.

To return to the wooden dunnage: Once again, squared lumber with a square cross-section has been chosen. Because the geometry of a square is close to that of the circle, lumber with a square cross-section has a tendency to roll. This is a point that we constantly repeat in this column, rather like a mantra, because in the event that the vehicle has to brake, the resulting longitudinal acceleration forces can cause the load to roll. This tendency to roll can be avoided by using rectangular formats. If these are not readily available, rectangular formats can be obtained by bolting two square pieces of lumber together. 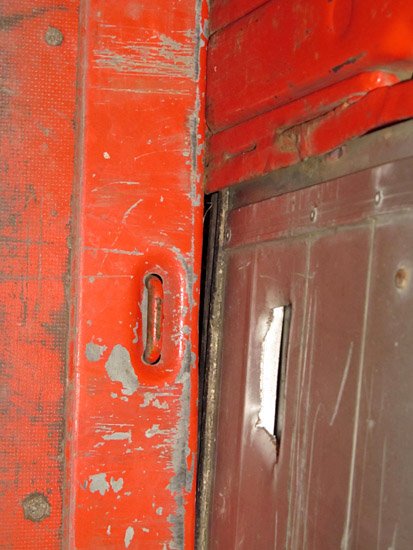 Figure 7 shows a load-securing point that appears to be perfectly usable. But it also shows a side wall that has already made the acquaintance of the fork of a forklift truck, and a stanchion that already shows signs of having been welded. The rough treatment of this vehicle has left its mark, and the side walls have suffered considerably. Once again, we ask ourselves how lashing belts could have been tightened over the top of side walls such as these. 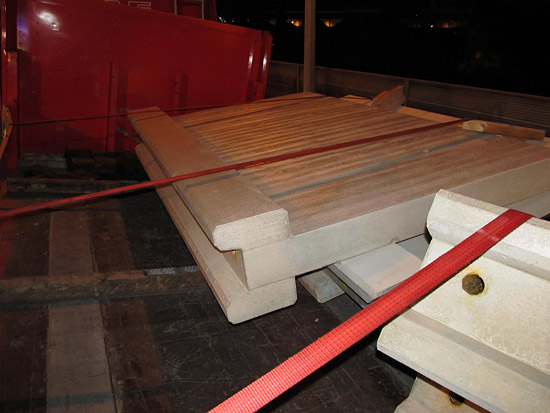 Figure 8 again shows the first pair of concrete elements that has tipped to the side under the tie-down lashing. The spacers between the elements are still in the correct places. 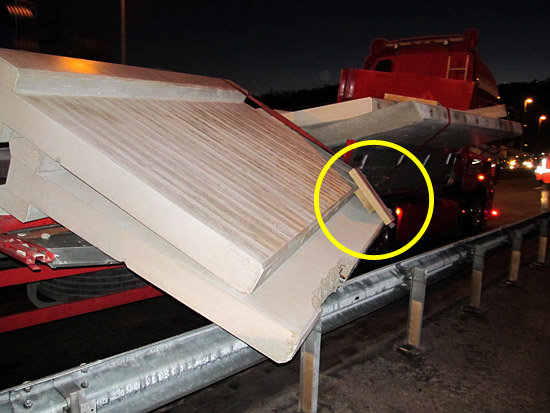 This figure clearly shows how the first pair of concrete elements has tipped to the side under the tie-down lashings. With the second pair of elements, the lashing belt has ripped, allowing the load to escape onto the road, or in this case a crash barrier. The spacer which has fallen off is circled in yellow.

It is undoubtedly superfluous for us to stress the dangers inherent in such a load, for instance when negotiating a long bend. 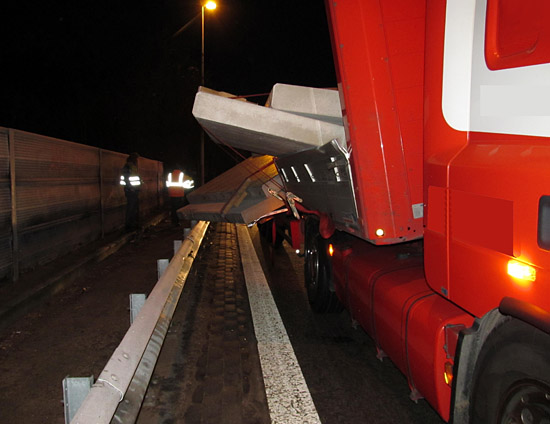 The view from the front completes the picture and gives another good impression of the potential risks for any car driving alongside the truck. 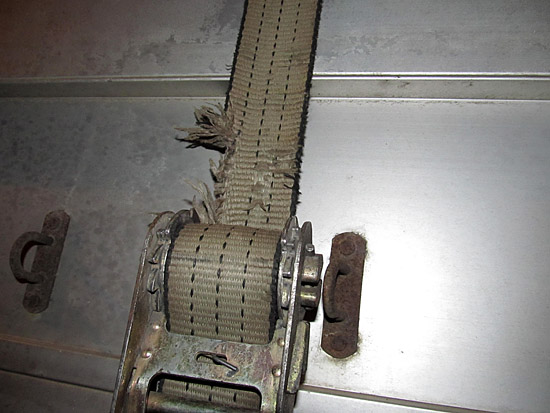 
How to secure the load correctly

To start with the loading area, it was a good idea to use friction-enhancing materials with this load. We shall adopt this idea and use rectangular wooden dunnage instead of square formats.

In our diagrams, we had no rectangular format lumber available and have therefore screwed pairs of square cross-section lumber together:


Using this rectangular format lumber, we have created "sandwich elements" by placing anti-slip mats (preferably heavy-duty) on the top and bottom of the dunnage. If a vehicle is used to transport only concrete, the sandwich elements can be glued together permanently. The concrete elements are then loaded onto these sandwich elements. At the bottom of the concrete elements, two boards were fitted at the front and at the back in order to protect the load from damage. At the top, the space as described above were inserted (see Diagram 1).

The load is secured to the sides with loop lashings rather than tie-down lashings. When securing the load, care must be taken to ensure that at least one loop lashing at the front and back is placed in such a way that the spacer is held in place by the loop lashing. If this is not possible, an additional tie-down lashing must be placed over the spacer. In order to prevent the spacers from slipping or twisting, two anti-slip mats can be placed below the board that is nailed to the top of the spacer (shown in dark blue in the diagrams). 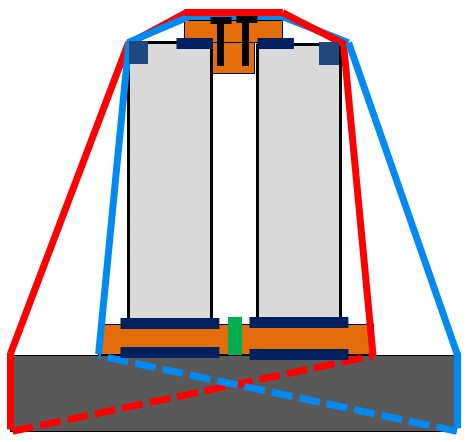 
Direct lashings are used to secure the load in and against the direction of travel. Because the concrete elements have no load-securing points or any other way of attaching load-securing equipment, we shall make use of lifting slings. Depending on their length, lifting slings can be used double or triple and placed over the front and rear corners of the concrete elements in a figure of eight (see Diagram 3). 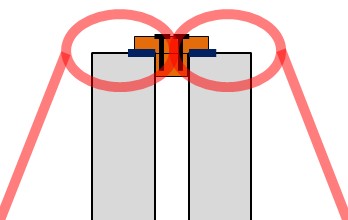 
This method now allows chains to be used to secure the load in and against the direction of travel: 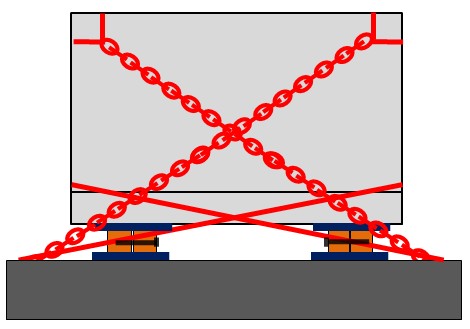 
Because direct lashings only ever achieve their maximum lashing capacity (LC) after they have become taut, i.e. after the load has slipped a little, it makes sense to use chains, especially for loads such as this, because they are far less elastic and thus reduce slippage of the load considerably.