Anyone driving a load like this, secured only with tie-down lashings, through the hills of western Germany is undoubtedly dicing with danger. The stone blocks may be rectangular rather than cuboid, but on the dunnage they are resting on, they can roll like dice in a gaming hall. 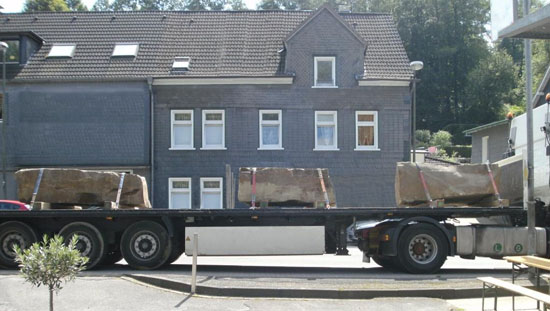 According to the driver, the vehicle was carrying a load of "only" 12 tonnes. From this author’s desk, it is only possible to intuitively assess the weight distribution. The first two blocks are assumed to be 3 tonnes each, and the third block on the three-axle trailer is assumed to be 6 tonnes. If we imagine a load distribution curve of average shape and visualize the overall center of gravity of this load in our mind’s eye, there is nothing to complain about.


Now let us have a look at how this load was secured. The method chosen to secure the load was with tie-down lashings. Depending whether a coefficient of friction µ of 0.4 or 0.3 is assumed for rough-sawn lumber, a securing force of either 6000 daN or 4800 daN is necessary to secure this load. We shall have a look at whether or not it makes any sense at all to begin such a calculation in respect of securing this load as we discuss the following pictures. 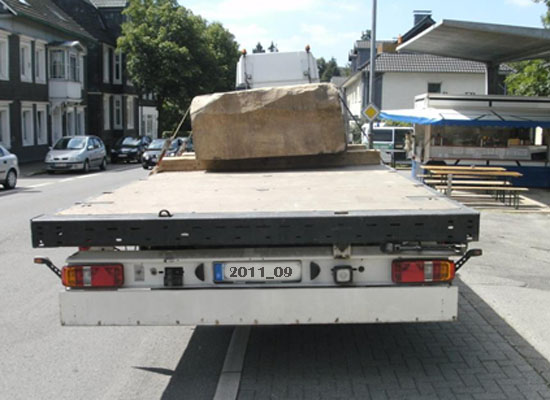 Looking from the back of the vehicle, we can see that the angles at which the belts were placed over the stone blocks were perfectly acceptable. We estimate that the majority of the angles are greater than 70° and that the efficiency of the belts can therefore be assumed to be significantly greater than 90%. These angles are of no importance when assessing the securing of this load and will therefore not be considered further. 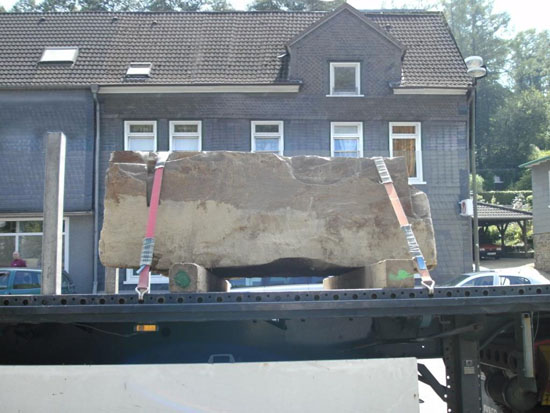 A further positive aspect is that the belts have been protected against the sharp corners of the stone blocks in almost exemplary fashion. There are sufficient protective sleeves present and in some cases several were used to protect belts. This picture also shows clearly that stable wooden dunnage of a square cross-section was used. Slightly rounded corners and residual bark can be seen on some of this dunnage, indicating that it has been cut from the sides of logs. One fundamental principle with respect to wooden dunnage is that board-shaped, i.e. rectangular formats should be used, as square cross-sections have a tendency to roll. This applies particularly if the corners of the dunnage are rounded as a result of them being the side of the log. Since the load securing materials indicate that this vehicle is often used to transport stone blocks such as these, it would make eminent sense to screw pairs of these square pieces of dunnage together to form rectangular dunnage. If friction-enhancing material were then also used on the top and bottom, the friction of the resulting "sandwich elements" can be regarded in an entirely positive light. 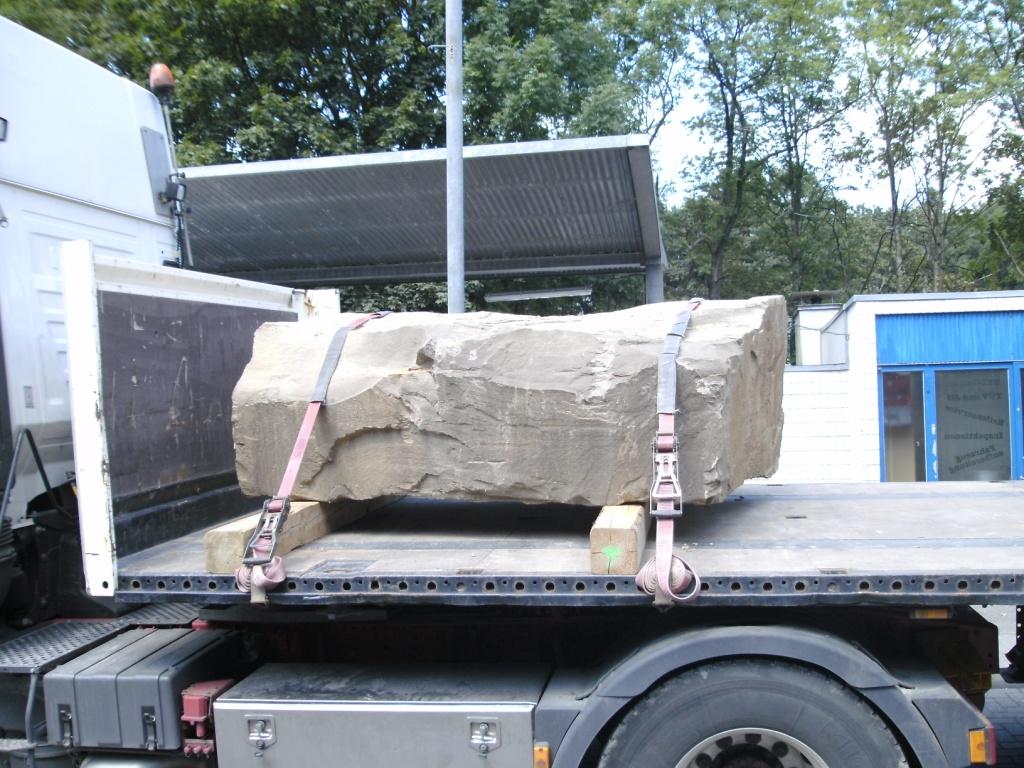 This figure shows the frontmost stone block. As already mentioned above, the rear belt has a number of protective sleeves that are vital for loads with sharp edges such as this one. A gap has deliberately been left between the stone block and the end wall. Either the driver has no faith in the end wall or the driver of the forklift truck did not have the time and patience to position the stone block squarely.

Given the assumed weight of 3 tonnes, the tie-down lashings already described, and the materials that would have been required to distribute the load evenly over the end wall, it would have been possible to make use of the end wall for securing this one block. With the arrangement shown here, however, there is a danger that the end wall would be ripped off in the event of a braking maneuver, because the tie-down lashings are completely inadequate for securing the load, which is liable to roll forwards on the square dunnage. 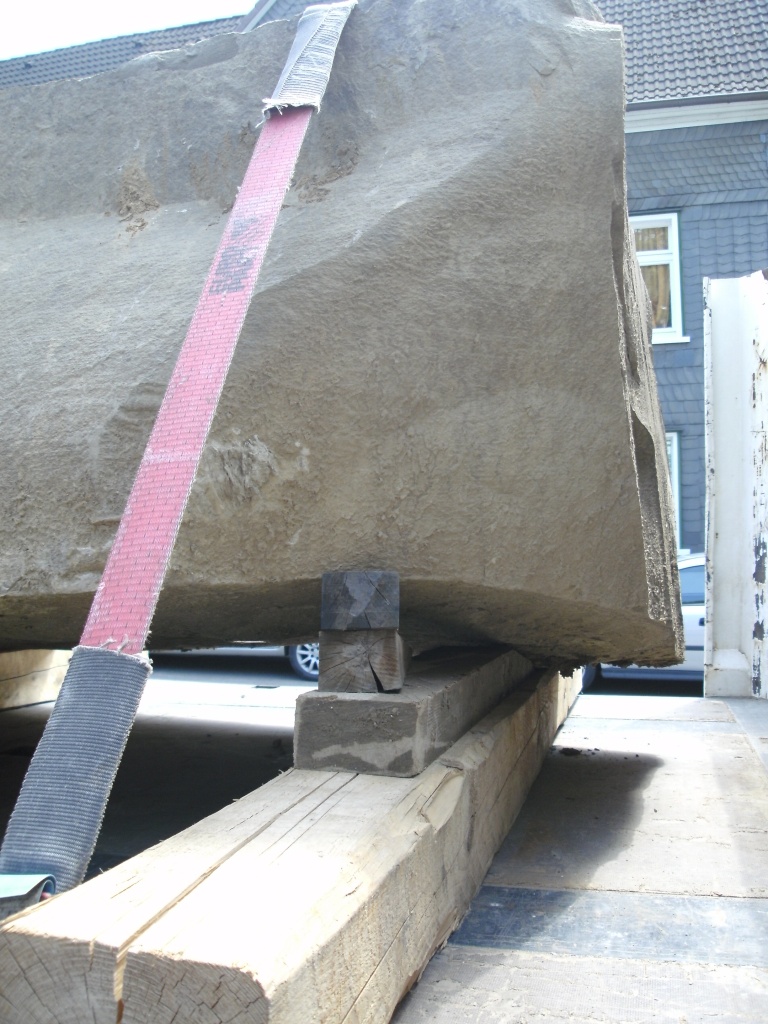 The front block is unevenly shaped on the right-hand side in the direction of travel. This means that this block is not able to lie flat on the wooden dunnage and, without additional support, would have tipped to and fro. The driver or loader took measures to counteract the unevenness of the load by placing additional wooden damage below it and driving in wooden wedges.

If you ignore the fact that the bottom wedge shows signs of breaking up, a measure such as this is to be welcomed. However, if the vehicle had needed to make a braking maneuver, the stone block would have immediately moved forward slightly, and the wedges under the block would have fallen out. The block would have tipped to the right of the vehicle and the pre-tensioning force of the front belt would have been completely lost, along with any securing effect. 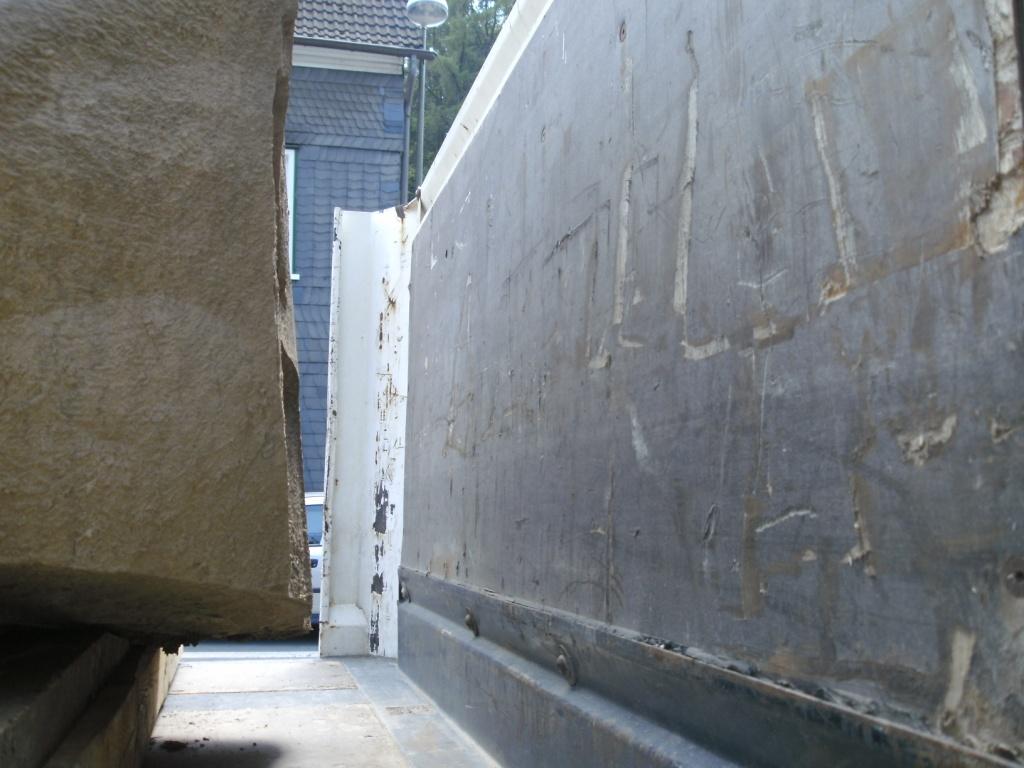 Figure 6 clearly shows the gap between the end wall and the stone block. The U-shaped cross-section of the front corner posts of the end wall would have allowed the insertion of squared boards. This means that it would have been perfectly possible to have taken measures to distribute the load over the end wall. It is, however, also true that positioning a stone blocks such as this as a tight fit against the end wall needs a forklift driver with a delicate touch, time and goodwill. 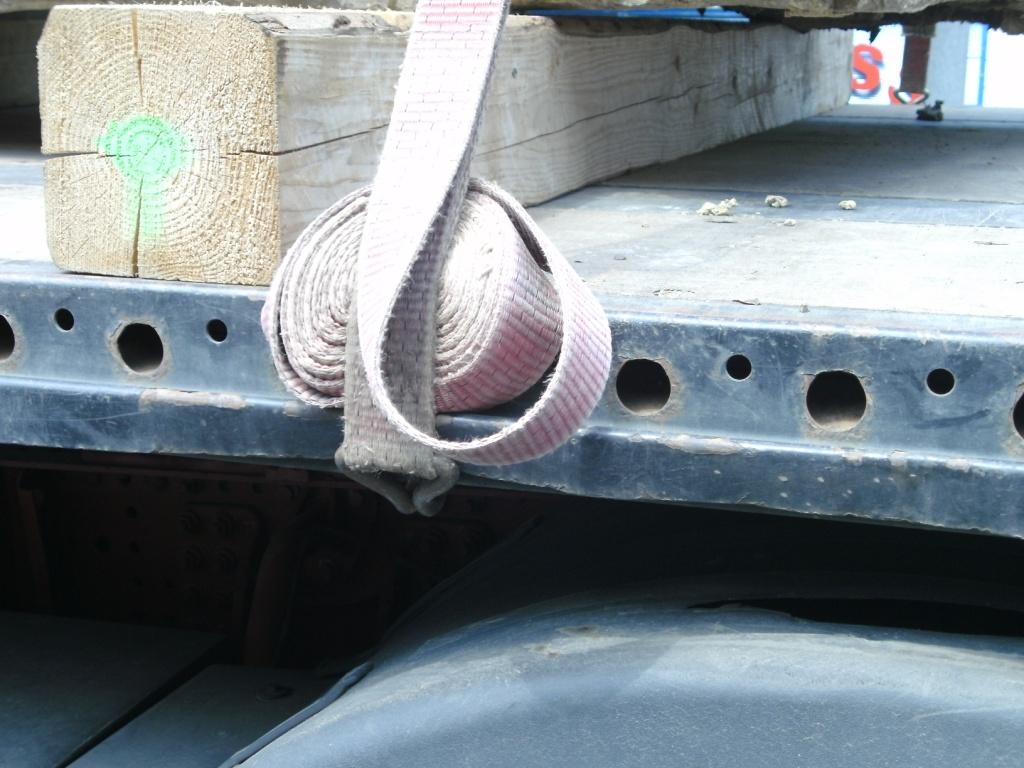 It appears that we ought to be grateful to this loading scenario in many ways, as we have rarely found so many points worth mentioning in a Photo of the Month. The driver or whoever was responsible for securing this load, is a tidy person. And to make sure that anyone can see and appreciate this characteristic, this person has rolled the belt up like a licorice wheel and poked it between the belt and the vehicle. In principle, tidiness is a virtue, even when securing a load. But rolled up like this, the belt forms a soft "cushion" that constantly gives way over time. This will have a negative impact on the pre-tensioning force over the course of the journey. 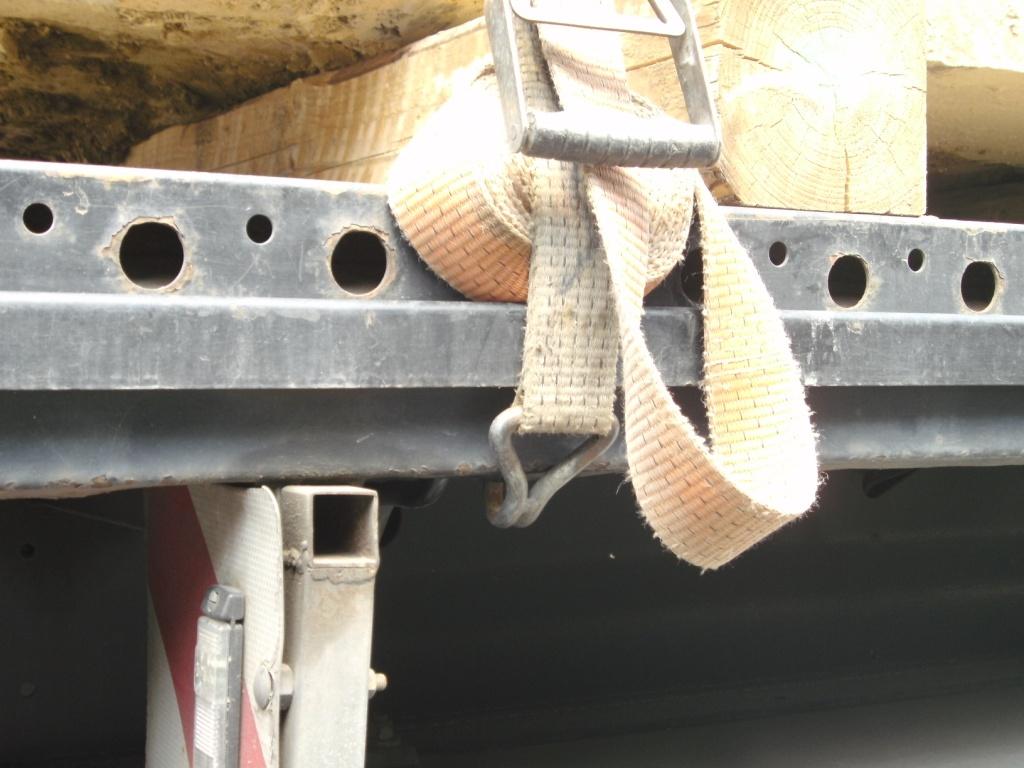 This picture shows clearly that the hook is loaded almost at its very tip rather than on the shoulder. In this way, bending stresses are applied to the hook rather than tensile stresses for which it was designed.


We have already commented on the modified dunnage above. But it is crucial that rectangular format sandwich dunnage must be bolted together firmly. The friction-enhancing mats should, if at all possible, be heavy-duty mats and form a very good starting point, as they possess excellent friction and loadbearing characteristics. With loads of this shape, direct securing methods virtually beg to be used to secure the load. Two loop lashings to each side and one loop lashing to the front end would be ideal to fulfill the requirements of load securing. One fundamental consideration, which may also have economic benefits, would be to use chains in place of belts. Modern chains are relatively light and are thus easily handled. Unlike belts, they do not need to be protected against the sharp corners of these stone blocks , which again makes handling easier, as positioning the protective sleeves when using belts can become a Sisyphean job.


Figure 2 shows that the vehicle is indeed equipped with loads securing points. Unfortunately, it is a fact of life that load securing points generally turn out to be in the wrong place, so it is expedient to equip such vehicles with as many load securing points as possible. This ensures that the belts can always be attached in the right place and there is no need to question whether the hook has been attached correctly or not.