If you go through the online press month by month, in some months you will only find four to six accidents resulting from inadequate load securing with drinks, and in other months you will find twice as many. Slip roads onto freeways, along with traffic circles or turnings, that involve a certain amount of dynamic forces, are the places where drinks prefer to part company with the vehicle carrying them. In other words, time and again it is the lateral acceleration forces that act on the load on any kind of change of direction during the journeythat cannot be compensated for by the load securing measures or by the superstructure of the vehicle.

If you take a look at the load securing measures in all these accidents, it becomes clear that they are noticeable by their absence, in particular when drinks are being transported. Especially in the summer months, speed is of the essence, and the value of the load really doesn’t "justify" putting a great deal of effort into securing the load. Not only that, right across the country people put infinite faith in the capabilities of curtainsiders, although this load securing columnist admits to having an uneasy relationship with them. Undoubtedly, there are curtainsiders that are able to rise to the task of securing a load, provided that it is loaded as a tight fit or near enough as a tight fit (assuming that everything on the vehicle is pretty well as good as new). But how about partial loads, and what do things look like when the curtain and all the other load securing equipment that belongs to such vehicles begin to show their age?

But back to the subject: 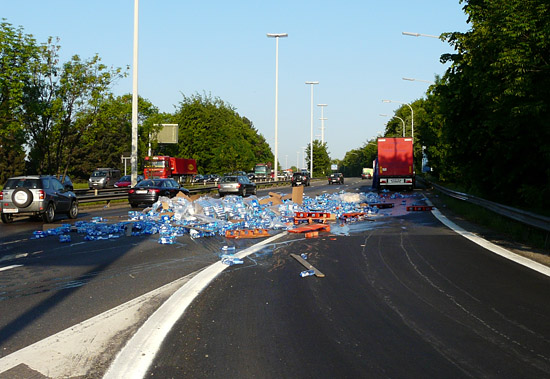 These pictures was sent to us from Belgium. This slip road is already familiar to us from December 2010. The vehicle was as standard curtainsider, and the load securing measures amounted to a few poorly placed strips of anti-slip material. Other than this, no other attempts to secure the load could be seen.

As a consequence, around a quarter of the load of polyethylene bottles parted company with the vehicle on the slip road and poured over the first two lanes of the freeway. This led to a 15 km traffic jam that lasted several hours before the road could be cleared of bottles. 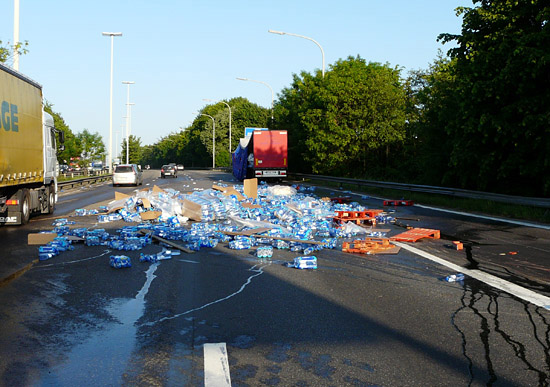 Figure 2 clearly shows the open side of the curtainsider and the debris on the freeway and acceleration lane. The red pallets and the cardboard interlayer dunnage, that was presumably intended to give stability between the individual layers of polyethylene bottles are clear to see. The removable wooden boards, that were unable to prevent the bottles from escaping, are lying in the middle of this chaos. 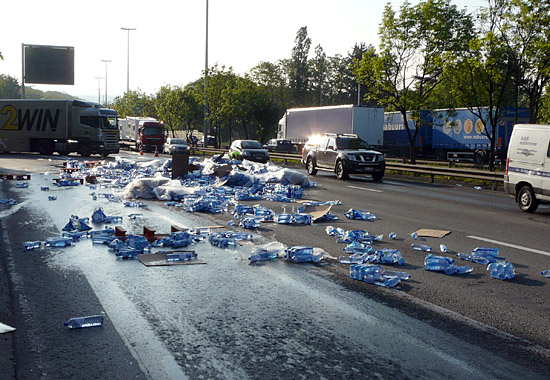 Figure 3 shows the extent of the contamination and gives an idea of the potential danger of this kind of lost load. In this case, however, it only resulted in a traffic jam lasting for several frustrating hours. Fortunately, there was no rear-end collision and resulting pile-up. 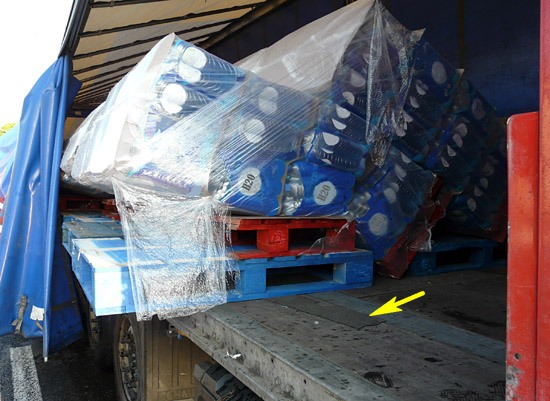 Let us remind ourselves; anti-slip material must be placed under the load and between all parts of the load in such a way that the load is completely isolated from the loading area with respect to friction. Put simply, the blue pallet should no longer make contact with the loading area, otherwise a "frictions short-circuits" will arise. And because physics follows strictly logical laws, the red pallet must logically be separated from the blue pallet with anti-slip materials in such a way that there can be no "friction short-circuit" between the wood of the pallets.

So much for our digression into the basics or friction theory. But if you have a look at the way the pallets were loaded, the meager attempts at securing the load using a few casually placed anti-slip mats were not the actual cause of this load securing accident. The load units themselves are, to put it mildly, extremely flexible. An attempt was made to counteract the flexibility of these stacked polyethylene water bottles by using intermediate layers of single-wall or double-wall corrugated board. This was supplemented by a peculiar method of stacking the pallets. The blue pallets were approximately 1.20 m x 1.20 m in size, and the red pallets, which were half their size, were standing on these. This method of stacking did not help to stabilize the load, but was not the primary factor in causing the accident.

Figure 4 shows that the extremely flexible load units on the red pallets, which were extremely susceptible to tipping, were combined to form load units in an entirely inadequate manner, namely using stretch film. As has already been mentioned, the intermediate layers were also not suitable for stabilizing these load units.

The author of this column is not a packaging engineer, and can therefore simply offer the following conjectures about the formation of load units that are safe for use and transportation. The intermediate layers must be manufactured from stable cardboard if they are to stabilize the load. The load unit could, for instance, be secured using stretch hoods, plastic straps with suitable edge protectors, etc. in such a way that they actually form a load unit rather than simply hold the load together while it is being transported by ground conveyors. For us, the "flexibility" of the load units is at the top of the list of factors that caused this accident. This was, of course, coupled with the lack of any measures to secure the load, although anti-slip materials would have been of no use in this case. Any load securing measures would have needed to take on a large part of the task of the packaging (formation of load units), although we cannot from our perspective ultimately assess whether this could have been done with a justifiable outlay of effort. 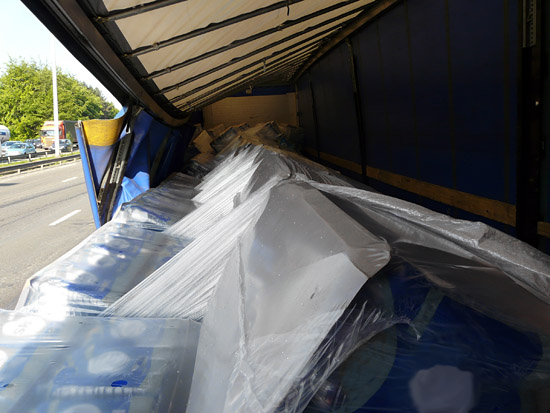 Figure 5 gives a clear impression of the dynamics involved when the vehicle joined the freeway. But it is also plain to see that the stretch film that was intended to hold the load units together was simply not up to the task. Although it is still present on the load units that remained on board, it has stretched as it saw fit, with the result that the load units were able to lean against the curtain.

If the curtainsider is a standard model, which is not designed or equipped to cope with unstable load units, measures must be taken to secure the load. This load could have been made considerably more stable if wide, hollow-section plastic corners were placed over it and it was then lashed down with tie-down lashings. As we have said, however, we cannot ultimately judge whether the load units would then have simply chosen to collapse into the middle.