Open tubs on an open box


This truck is being used to transport pebbles in tubs. Open box trucks are often used for loose loads.

That’s not the case with this vehicle: At one time it had been an open box, but, for reasons unknown to this author, it was modified into a flatbed. 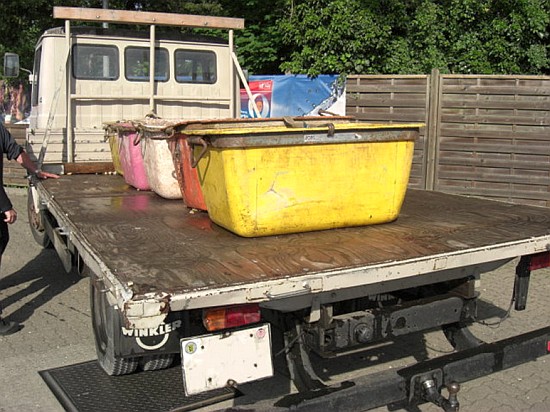 But what would you want to transport with such a vehicle, and what can be transported?

There are no lashing rings on the loading area and, apart from the end wall, there is no superstructure against which a load can be loaded as a tight fit.

In place of the side gates, bars have been attached to the frame, which can be used as lashing points, provided they are strong enough. It is, however, questionable whether the frame is suitable for withstanding forces of 1000 daN or more at this point.

The vehicle was stopped during a police inspection as shown in the figures below. 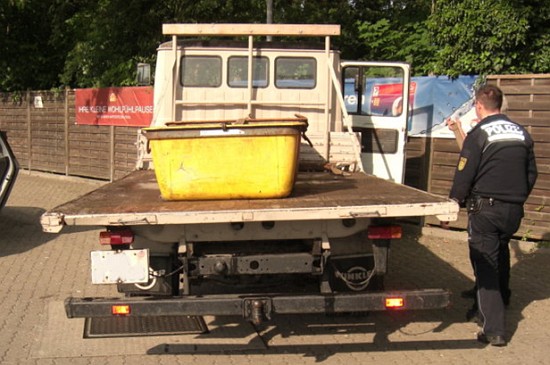 A single lashing belt was used.

This solitary lashing belt (one loose end) was hooked onto the back edge of the last tub, twirled forwards over the rest of the tubs and then knotted to the end wall. 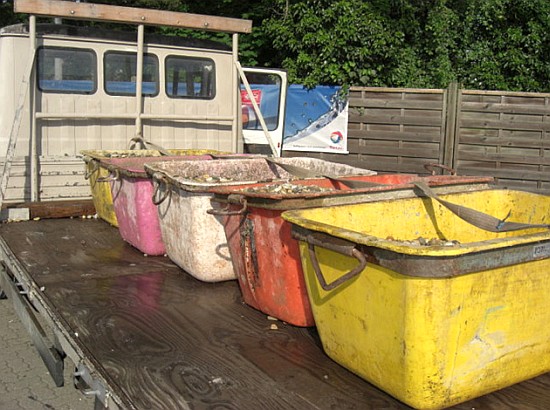 Even the most imaginative load securing columnist is unable to fathom any purpose behind this supposed securing measure. 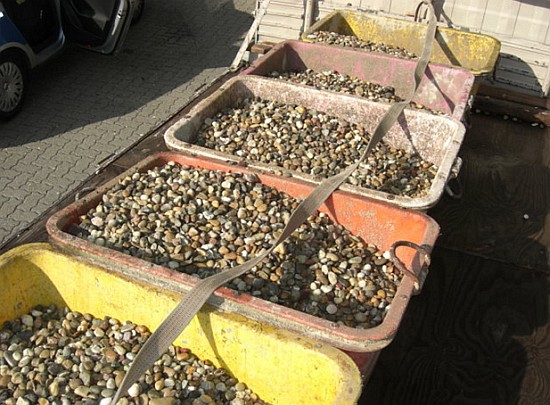 Is it even possible to secure the load on this vehicle?

Yes, it is possible, although it requires a little effort.

To start with, the loading area should be cleaned, and then anti-slip materials (with a coefficient of friction μ of 0.6) should be placed on the clean loading area before positioning the load.

Because the tubs containing the pebbles are suitable for crane handling (fitted with a strong metal band under the lip of the tub, indicated by the red arrow), we assume that the load can be secured as a tight fit by placing the top edges of the tubs against each other. It is therefore necessary to remove as many pieces of squared lumber from the end wall (see green arrow) to allow the first tub to be loaded directly against the end wall with its top edge supported by the end wall. This would achieve a tight fit against the end wall. 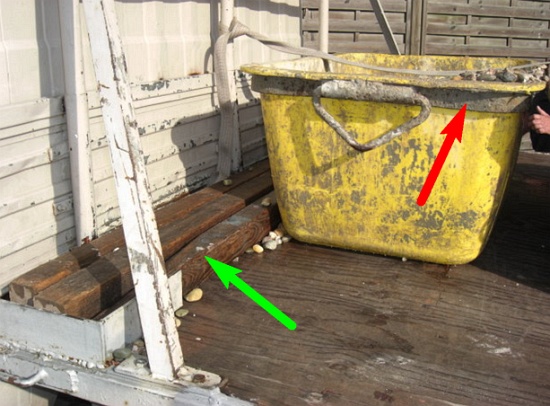 If we assume a weight of approximately 2000 – 2500 kg for the load, the end wall must be able to absorb forces of approx. 800 – 1000 daN in the event of an emergency braking maneuver, for instance.

The truck has a maximum payload of approx. 2500 – 3000 kg. If the vehicle was built according to applicable standards, the end wall must be capable of withstanding loads of 40% of the payload, i.e. approximately 1000 – 1200 daN. This would ensure sufficient securing force in the direction of travel.

As far as securing to the sides and to the rear are concerned, steps must be taken to ensure that the high coefficient of friction μ of 0.6 is maintained. Theoretically, this can be achieved by lashing the load down with tie-down lashing belts. However, the problem is that there are insufficient lashing points at suitable locations.

For this reason, we would recommend that direct lashings are used.

As we have already mentioned, the tubs are suitable for crane handling and are fitted with slinging points capable of withstanding the relevant loads and these can be used for securing the load without any problems. Each tub should be secured directly to both sides. The benefit of this approach is that the belts can be well positioned and cannot slip off. The position of the securing points can be selected in such a way that the rearmost tub is secured (slightly) to the front and the frontmost tub is secured (slightly) to the rear.

At this point, we should also like to comment on the load distribution. From the first picture, it would seem that the load is positioned a little too far to the left. If this is in fact so, this should be avoided during loading. We are unaware of whether or not load distribution considerations allow the load to be positioned against the end wall at all. The necessary load distribution plan was unfortunately unavailable to us before our publishing deadline.

The pebbles are free to move within the tubs (see Figure 4). We would therefore urgently recommend that the tubs should be covered to ensure that the load remains where it belongs.

We should also like to comment on the pebbles lying around loose on the loading area. If the stones fall from the loading area while the vehicle is traveling, they would have much the same effect as bullets on other road users. Such thoughtlessness can cost lives.

Finally, we should like to point out that everybody responsible for load securing should imagine that their own vehicle also has no side gates, tarpaulins or other boundaries. This is often sufficient to awaken a feeling that the load is inadequately secured!