Not only that, I’m driving from Wilhelmshaven to Rotterdam, and there’s hardly any bends on that road. That was the justification the driver offered to the police officer carrying out the inspection to explain why he had not secured the load. 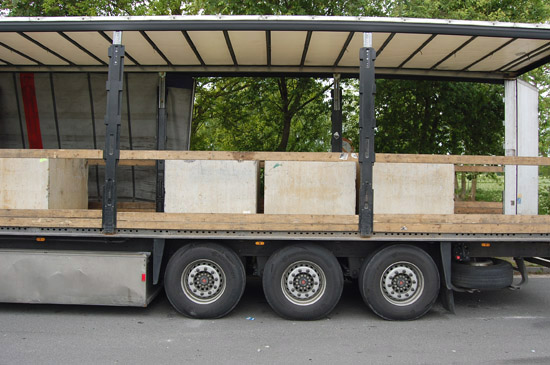 But let’s start at the beginning: The semitrailer was loaded with concrete blocks placed in a row in the middle of the loading area. The total weight of the load was some 22,000 kg.
The vehicle was authorized to carry this load. The load was distributed in such a way that neither the drive axle of the tractor vehicle nor the axles of the semitrailer were overloaded. 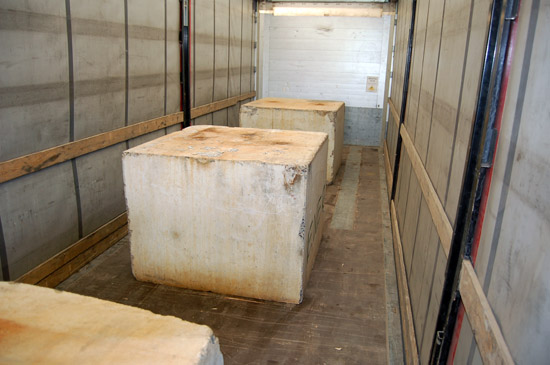 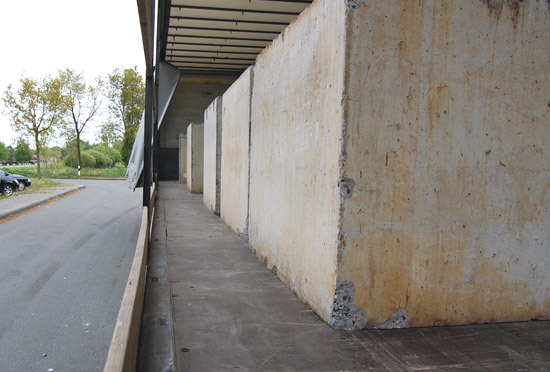 The loading area is an embossed wooden floor. On one side, the blocks were standing on a steel rail let into the floor.
No anti-slip materials were used. The driver actually claimed that this load secured itself due to its high weight! 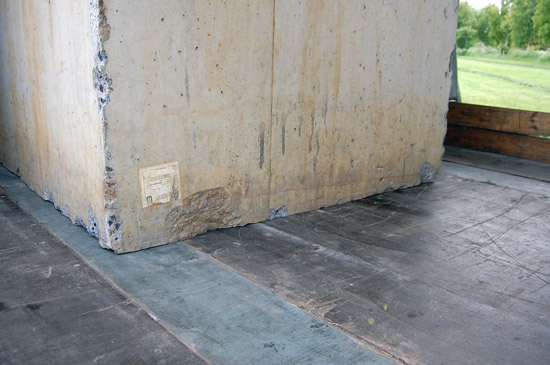 The fact is that the load does not secure itself at all. It makes no difference whether it weighs 4 tonnes or just 500 kg. When considering the securing of the load, it is important to know what forces can act on the load when it is on the road. In addition, a realistic estimate must be made as to the magnitude of the friction forces between the load and the loading area.

It is also necessary to be aware of the fact that any friction that may be present between the load and the loading area is subject to vertical vibrations during the journey that can be caused by uneven roads, among other things. This means that the friction is constantly changing during the entire journey. Sometimes it is extremely high, but sometimes it can be extremely low.

This can be avoided if the load is "connected" to the vehicle. Two lashings placed over the load and connected to the loading area (tie-down lashings) ensure that the vertical oscillations are considerably reduced and that the friction that is present can actually have an effect throughout the journey.

In this case, however, this is still not sufficient to secure this load. To start with, steps must be taken to ensure that the friction is enhanced. This can be achieved by using anti-slip materials, for instance. If these are as new, and if they are placed on a clean loading area under a clean load, a coefficient of sliding friction µ of 0.6 can be assumed.

This applies to the concrete blocks, provided that each of them has been lashed down with two lashings. We now only have to deal with securing to the front.

In the event of an emergency braking maneuver, forces of up to 0.8 g can act on the load. But because we have only secured 0.6 g in the way described above, 0.2 x the weight of the load still needs to be found in terms of securing force.

In the case of this load, this means: 1 concrete block weighs 4,400 kg according to the delivery note, resulting in a weight force of approximately 4,400 daN. 0.2 x this weight force amounts to 880 daN securing force that is still required.

If the two tie-down lashings on each concrete block are using long-lever ratchet tensioners and have an STF of 750 daN, securing forces of at least 1,000 daN can be achieved with them, provided that they are optimally pre-tensioned (tensioning angle between 50° and 90°).

Advantage: The driver need have no fear of unexpected bends during the journey and can even make an emergency stop without being afraid that the load will slip into the end wall and hence into his back.

Note: Even heavy loads do not secure themselves!