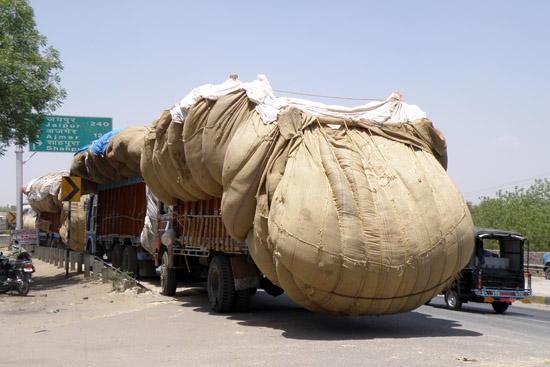 You sometimes have to ask why we Europeans make such a fuss about vehicles that are just a tiny bit longer than usual. On the Indian subcontinent, vehicles are utilized to the full, and that applies to the sides and the rear as well. This has several benefits: If the vehicle were to roll over in a bend, it would have a soft landing, and even the wing mirror would have a chance of surviving the roll. The risk of another vehicle running into the truck from the rear may be a little higher, as the brake lights appear to be somewhat obscured. On the other hand, the impact would be cushioned, so that the consequences of such an accident would be far less serious than if the vehicle collided directly with the truck.

The left rear twin tire appears to be damaged, but what else are dual tires for?