On 22 November 2010, two loads which had been identically loaded and "secured" were lost within a period of four hours.
This all happened in Belgium, but could undoubtedly have happened just as easily in Germany or any other Central European country. Physics is no respecter of national borders. Miraculously, there were no injuries to anyone involved or any other road users. 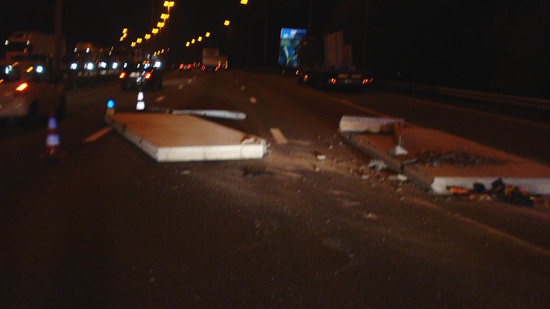 Even though it is somewhat blurred, the first picture clearly shows how the accident happened and its consequences. Concrete slabs of considerable dimensions are lying on the two right-hand lanes of a three-lane highway. The fragments and the marks showing the distance that the concrete slabs slid along the road give some idea of the dynamics involved. The pictures speak volumes. All those who regularly express the opinion that heavy loads effectively secure themselves because they are unable to move should look at these pictures to see how wrong they are. The photo is excellent evidence that high weight does not secure itself; on the contrary, it does heavy-duty damage. 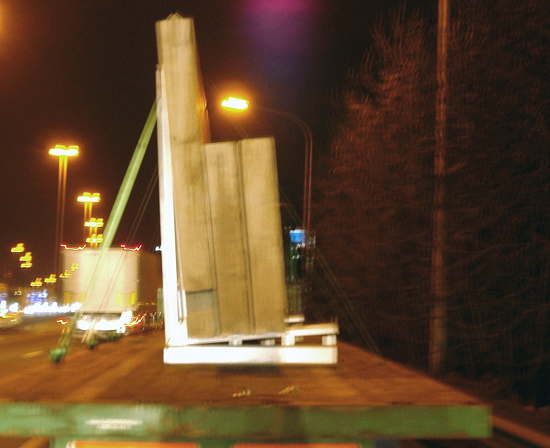 Figure 2 shows how the concrete slabs were originally loaded. Loads in the form of slabs and sheets are often loaded in A-frames. This can frequently be seen when transporting glass, and sometimes steel sheets, and not least when transporting concrete slabs. These A-frames are often securely connected to each other and also connected to the vehicle in guide rails. The oblique supports at the base of the A-frames cause the slabs to lean in towards the middle of the vehicle and, because they rest against the A-frame, which is in turn securely connected to the vehicle, they considerably facilitate the establishment of a tight fit when securing.

Figure 2 also shows that these concrete slabs were resting at an angle. However, they were not transported in an A-frame, but rather in an L-shaped loading frame. When A-frames are used, the load is distributed over two sides and the increased risk of tipping as a result of the oblique orientation of the slabs is virtually compensated for. It should also be noted that A-frames generally have bases that extend across the whole width of the vehicle, thus providing greater stability to the entire construction. 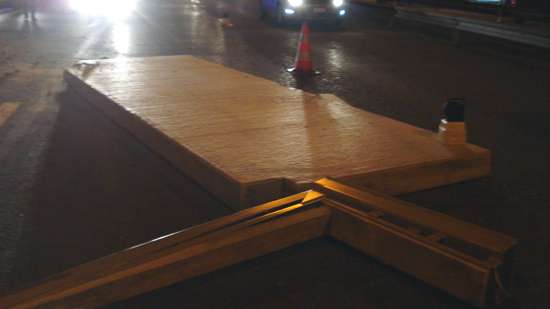 When looking at Figure 3, anyone who has a passing interest in load securing would be flabbergasted (if they weren’t already). The L-shaped loading frames were not connected to each other or to the vehicle in any manner whatsoever. Even though it is blurred, Figure 2 shows that a total of three tie-down lashings were intended to restrain the load. The risk of the load tipping to the left of the vehicle is considerably increased by the fact that the concrete slabs are tilted to the left by the angled L-shaped loading frames. It is not surprising that the load was lost to the left of the vehicle.

Assessment:
In this case, people have put a load on the roads without the slightest consideration for the physical forces to which it would be subjected during transportation. Thoughtlessness of this kind can represent an extremely serious risk for other road users, as is clearly evidenced by the pictures.

Securing the load:
So how can a load such as this be loaded and transported correctly?

If no special vehicle (drop-deck low loader) is available for transporting slabs such as these, the following recommendations can considerably facilitate loading and securing the load:

The fact that two accidents of the same type can happen within four hours demonstrates the acute danger of such an incorrectly chosen method of loading. Any loader who loads vehicles and sends them off in this state is in urgent need of a training course in loading and load securing over several days to prevent them from ever putting such a hazard on the road again.