Quite so, after all, this load is lead ingots, albeit rather more than a ton. 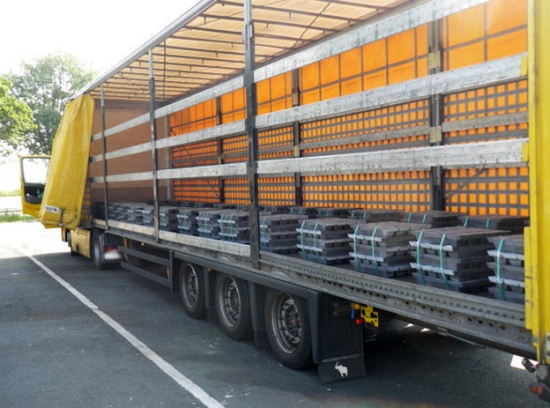 Each package comprised five layers of four lead ingots, a total of 20 ingots per package. Ech package is strapped together to form a load unit using plastic straps.

An anti-slip mat has been placed between the loading area (embossed wooden floor) and each of the packages: 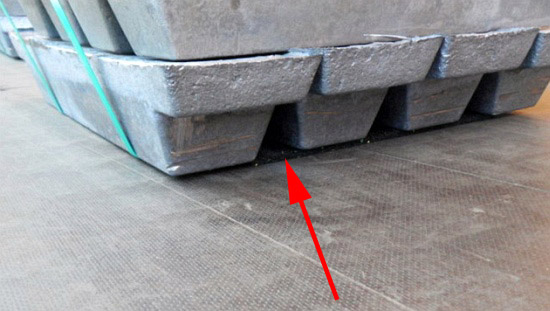 The load is not secured by any other means!

The anti-slip mats are not exactly taking a weight off our minds. 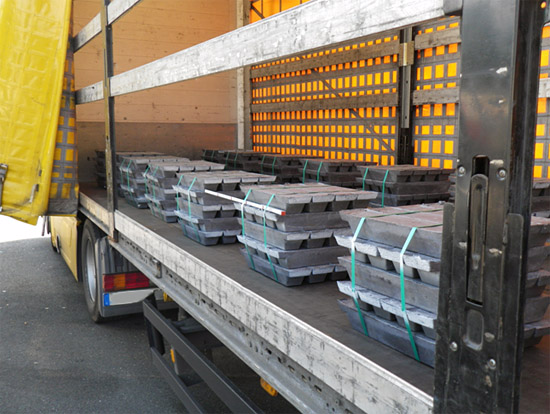 If you look at Figures 2 and 3 a little more carefully, you will see that the anti-slip mats do not protrude at any point. In the case of the sixth stack on the left of the vehicle (Figure 3), you can see how the load unit is already resting directly on the loading surface. During braking, the load inevitably tips forwards, touches the loading surface at this point without any anti-slip material between them and the friction is automatically reduced by an incalculable amount. This is unacceptable, and not only with this load.

So how can this state of affairs be improved? Simple: The anti-slip material is chosen in such a way that it protrudes at all edges, which means that the load cannot come into direct contact with the loading surface, even when a load is applied.


Seen from above, the load was distributed as shown in the following diagram: 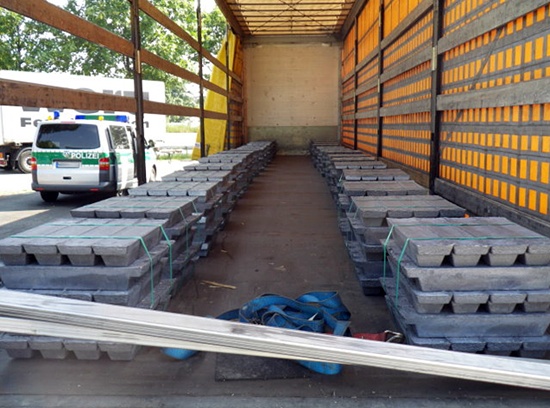 And there was no tight fit to the sides either. There is a gap in the load of more than one meter along the middle. 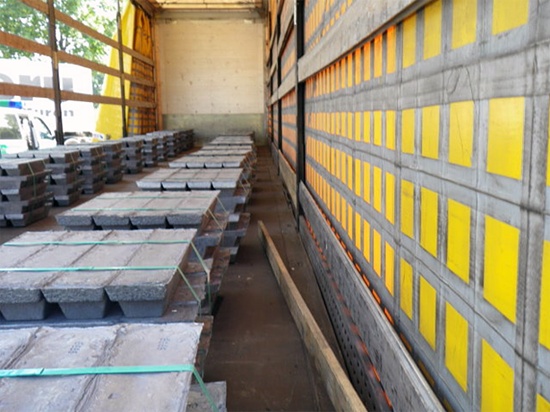 Friction alone has to take on the entire job of securing this load.

With such large gaps in the load, the superstructure (end wall, curtain and tailgate) cannot provide any securing force to secure the load. Before setting off, the driver and the loading staff responsible for load securing have to consider whether the load is adequately secured if the superstructure is ignored. If you simply imagine a flatbed trailer without an end wall or a curtain loaded with these lead packages then it ought to make you feel very uncomfortable indeed.

The figure below shows the distance between the load and the end wall: 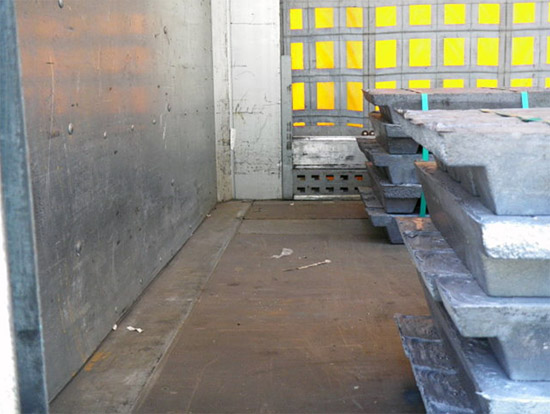 So what on earth were the driver and loader thinking about when they loaded this truck?

The next consideration is how to secure the load. We are unaware of how high the friction is between the individual lead ingots. Let us for a moment unrealistically assume that the plastic straps made it possible to form a functioning load unit.

Now we have to narrow down the friction between the loading area and the load unit. The loading area has been swept clean and new anti-slip mats with a thickness of 8 mm were used. A coefficient of friction μ of 0.6 can be assumed here. Theoretically (!!!) this may be sufficient for acceleration to the sides and to the rear, but it is certainly not adequate for acceleration in the direction of travel.

So why is the friction to the sides only theoretically adequate? Because this friction is constantly reduced during the trip as a result of vertical jolts, oscillation and vibration. This means that further load securing methods are necessary to maintain the considerable frictional forces that are initially present as a result of the anti-slip mats throughout the trip. This load securing is known as minimal load securing. It can, for instance, take the form of tie-down lashings whose job is to absorb these oscillations and vibrations to allow the good levels of friction provided by the anti-slip material to be upheld throughout.

In the direction of travel, at least 80 % of the weight of the load must always be secured. This means that given the existing friction forces of 60 %, a further 20 % of the securing force still needs to be found.

This is easily achieved:

Firstly, the load must be positioned differently on the vehicle. All the packages must first be placed directly next to each other and behind each other in the direction of travel. The existing anti-slip mats can be placed under the load.

The entire load can be arranged in two blocks as shown below to ensure that the load is distributed correctly (take note of the load distribution plan!):

Now, the individual packages must be secured with tie-down lashings to absorb the vertical movement described above.

Normally, two tie-down lashings should be used for each load unit to prevent the load from twisting. In this case, edge protectors could be used that protect several load units at once.

Then, one tie-down lashing belt is used to secure each pair of load units. In this case, 16 belts would be needed as shown in Figure 9:

To provide sufficient protection in and against the direction of travel, four additional loop lashings are used: two to the front and two to the back. See Figure 10:

These loop lashings have two functions:

This is a good method of securing this supposedly difficult load.


Loads do not secure themselves!
And certainly not if they are heavy.
Even if they are like a ton of lead!!!!


You can see a similar load which, unlike this one, had already resulted in damage, in the Photo of the Month, June 2009. The fact that we have already dealt with loads like this in the past saddens even an experienced load securing columnist. After all, he had a slight hope of actually changing something with this column. Perhaps one shouldn’t have such high expectations in this business. The anti-slip mats that were used at least clearly show that someone (anyone, maybe even the loader) had given the matter some thought. So let’s take it easy; if we carry on working away at the issue of load securing, here and elsewhere, for another 10 years, perhaps we’ll even get minimal load securing and after another 10 years, who knows, we may even see direct securing.

Unlike Don Quixote and his loyal companion Sancho Panza, it seems as though we really are having an impact.


A final thought about forming load units. The strapping has only been applied laterally. This has one primary reason: If the stacks had also been strapped longitudinally, the forklift would not have been able to grasp them. The solution would have been a different ingot profile, that would have allowed the forks to pass under the bars, so that the load did not need to be gripped at the sides.