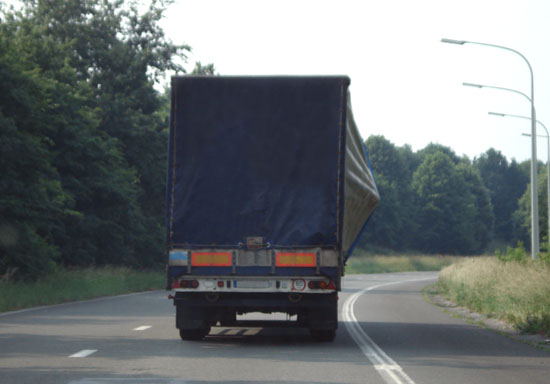 
Anybody interested in transportation who travels the roads of Europe cannot fail to notice one particular type of vehicle, namely the curtainsiders. These vehicles take their name from the tarpaulins at the sides that can be pushed to the front or to the back just like a curtain. Generally, the stanchions can also be pushed to the side with a minimum of effort, and as a rule, the roof can also be pushed open. This means that these vehicles can be made ready for loading very quickly and can be loaded from the top using a crane or from the side using a forklift truck. If the tarpaulin is in the way at any point, it can simply be pushed to the side like a curtain. The fact that the roof and the sides can be opened very quickly offers considerable benefits with respect to logistics processes.

As far as load securing is concerned, the benefits are actually limited. Even though the tarpaulins try to convey a strong, stable appearance, reinforced as they are with a wealth of belts, generally vertical, but some even horizontal and vertical, they cannot overcome two disadvantages on their own. The first disadvantage is that they have to absorb forces acting to the sides more or less perpendicularly, and the second disadvantage is that the forces absorbed by the curtains have to be transferred somewhere.

The first problem is fundamental. Any load which experiences acceleration to the side and which, for load securing considerations, must lie flush (as a tight fit or with minimal gaps) with the side boundary of the loading area, i.e. against the curtain, makes contact with the curtain at right angles. The effect that can be observed here is sometimes referred to in Germany as the "wet sock effect". This effect can be seen with any clothesline where considerable effort has been expended to tension it so that it is absolutely straight. As soon as the first wet sock is hung on the line, the line will be displaced downwards. A straight clothesline offers an infinitely large angle (180°), and thus an infinitely small force is necessary to displace the line downwards. As soon as the clothesline has been displaced downwards, angles (less than 180°) appear, and the clothesline can begin to do its job (holding up the sock). Exactly the same principle applies to the vertically tensioned tarpaulin against which the load attempts to press in the context of load securing.

As has already been said, the second problem arises when transferring the forces into the roof or into the loading area. The tensioning equipment on the tarpaulin that is used to join it to the vehicle is primarily suitable for tensioning the tarpaulin. The components used to suspend the tarpaulin on the top beam of the superstructure must absorb the high forces. Only specially strengthened superstructures are capable of doing this. Many vehicle superstructures (stanchions and longitudinal beams) give way under the load and bend so that the tarpaulin can move further to the side.

In this particular case, only one pallet, probably loaded with paper, has pressed against the tarpaulin. The wet sock effect meant that the tarpaulin was not able to absorb sufficient force vertically. The pallet therefore continued to slip and ultimately tipped into the tarpaulin. Now that the bulge was of a considerable size and the angles formed an almost "ideal" triangle of forces, as can be seen in Figure 1, the tarpaulin was able to exert a considerable force against the pallet. It is clear to see how the top side beam has already been displaced downwards by this single pallet. If more pallets had slipped, this displacement would have been greater, the tarpaulin would have bulged still further, the center of gravity of the load would have shifted to the side and all this would have happened dynamically. The lack of any load securing measures could easily have resulted in the whole curtainsider tipping over. 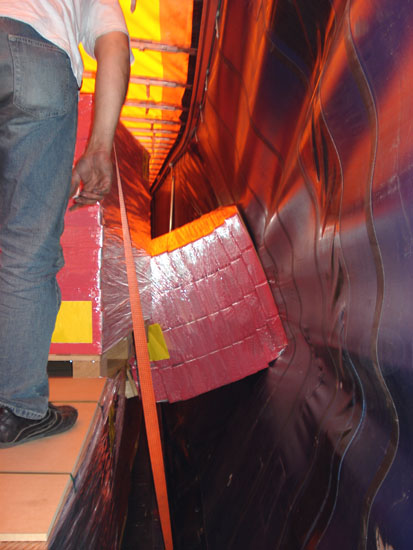 
The only load securing mechanism applied to the pallets loaded with paper was friction. The belt that can be seen in Figure 2 was intended to support the load and to be used for recovery after the load had already slipped. If we consider how the cargo units have been formed, it may not be exemplary, but the load did not extend beyond the pallet, nor did it fall short of the edge of the palette, which means that the units had smooth sides all round. A plywood sheet was used to cover the units, and this was probably connected to the pallet using steel straps. Forming the cargo units in this manner would have allowed tie-down lashings to be used effectively. In itself, the load was stable. This means that the pressure exerted by a tie-down lashing could have been transferred to the layer of pallets below without difficulty. The pallets appear to be thoroughly robust, and the use of friction-enhancing material would have allowed the pallets to be secured with tie-down lashings without placing greater demands on the securing. Strong edge protectors at the corners of the pallets and horizontal strapping would have perfected the load units still further.

A final word on the bulge in the tarpaulin!
Among other things, the testing standard for the tarpaulins states that they must be loaded to the side with suitable weights (depending on the payload) for test purposes, that they must withstand this load for a time x with no permanent deformation and that they are only permitted to bulge by 300 mm. This testing standard explicitly states that these 300 mm (or 30 cm or 0.3 m) are only to be taken into account for test purposes and must not be misused for load securing purposes as a matter of course.

Now, even renowned testing institutes have hit on a dumb idea and have for years been testing curtainsiders in road tests and with all sorts of sorry scientific efforts with the load allowed to rest against the tarpaulin, which bulges considerably and sometimes (the laws of physics permitting) regains its shape – at least partially. But although the tarpaulin "breathing" in this way appears to have some backdoor legitimacy for the purposes of load securing, it is not laid down in any testing standard. Instead, we should be content to take our hats off to the designers, who have developed vehicles that provide a mechanism that not only perfectly protects the load against external influences such as rain, snow, wind and other bad weather, but which can also simply be pushed to the sides as necessary.

If we took the pseudo-legitimized breathing of the tarpaulin to its logical conclusion, we could actually load the vehicles with a half a meter bulge on each side to take best advantage of the load securing capacity of the tarpaulin. This would offer a number of benefits at once. The vehicles would provide a far greater volume, the tarpaulin itself would exert a certain pre-tensioning force and hence load-securing force on the load, and as a result, no further load securing measures would be required.

Of course, the German road traffic licensing regulations (StVZO) do not permit such a thing. Section 32 (1) No.1 StVZO states that motor vehicles and trailers must not be greater than 2.55 m in width. And this applies for the entire journey, even in bends, when a load causes the side of the vehicle to bulge, as in this example. In addition, paragraph 8 states that no tolerance is to be permitted in respect of this dimension!
Now it could be argued that this dimension only applies to the vehicle, but that in this case, the excess width would be caused by the load. Even if this were the case, we still have the German road traffic regulations (StVO). Section 22 (2) of these regulations state that the vehicle and load together must not exceed 2.55 m.
The only exceptions to these two regulations are when loads which cannot be split are to be transported. This, however, requires special permits and certificates of exemption.

Finally, we should note that we see curtainsiders as having an established place in our logistics network. They offer many benefits, but that doesn’t mean that we should expect the impossible of them. Because the tarpaulins are so easy to push to one side, it is not particularly difficult to take sensible load securing measures.

As we have seen in our example, the load is eminently suitable for being secured with tie-down lashings, and the stable load units would have allowed friction-enhancing material to be fully effective. It should also be noted that there are curtainsider vehicles with reinforced roofs, and stanchions and strong, removable slats that are able to withstand defined forces to the sides and transmit these forces to the stanchions, roof and vehicle floor, thus providing a stable structure. These vehicles are somewhat more expensive and the removable slats must also be fitted by hand. The goods vehicle industry has a suitable solution for virtually any problem. The all-singing, all-dancing, all-purpose trailer is not yet on the market, however.