Heavy construction equipment has to be moved from A to B all the time so that it can do its job at different sites. And that was the case with this excavator that was transported on the freeway on a lowloader trailer. Unfortunately, it was so poorly secured that it fell from the loading area onto the road during the journey. It was purely a matter of good fortune that the "only" consequence was a traffic queue of several miles and that no other vehicles were damaged or people injured. 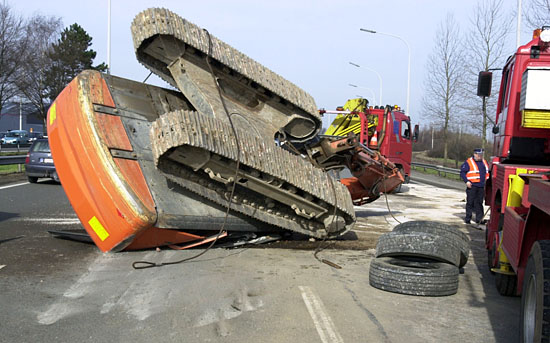 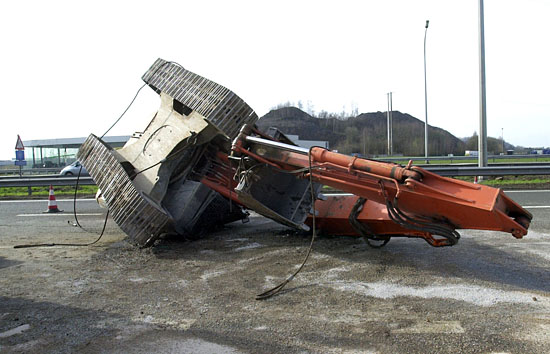 So what happened? Information about the course of the accident and the load securing that was in place are sketchy, as the authorities only arrived on the scene after the excavator had made its excursion onto the road.

Weighing in at around 21 t, the excavator was being transported on a four-axle lowloader trailer that in turn was pulled by a four-axle truck (Figure 3). 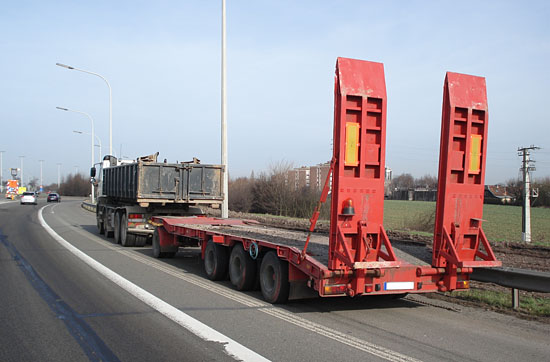 The vehicle was travelling at around 60 km/h. A technical fault on one of the axles meant that the trailer slewed twice during the journey. The driver was taken unawares and braked sharply, causing the excavator to depart from the loading area.

The excavator was only "secured" with a lashing chain used as a tie-down lashing. This chain can be seen next to the trailer in Figure 4. It is no longer possible to reconstruct the extent to which the excavator was also secured with the wire ropes that can be seen in Figures 1 and 2.

Not only that: The loading area was covered with gravel and soil, which would have had a negative impact on the friction between the tracks of the excavator and the loading area (Figure 5). 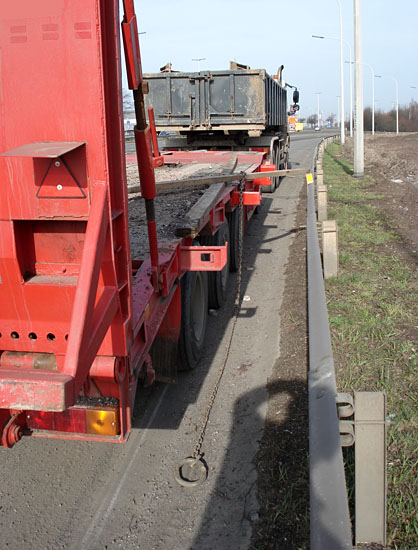 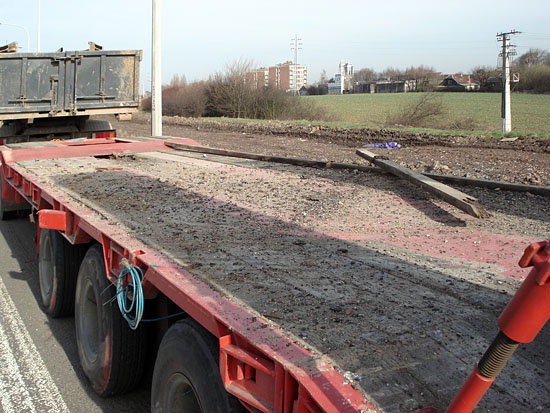 
What steps can be taken to secure a load such as this adequately?

To start with, the loading area mist be swept as clean as possible. In addition, sufficient suitable lashing points must be available.

Heavy construction equipment such as this is best secured using direct lashings or diagonal lashings.

If the load, in this case, the excavator, only has suitable lashing points at the front and back in the middle of the excavator, diagonal lashing can take the following form:

In the direction of travel, horizontal forces of 0.8 g (80% of the weight of the load) can be generated. To the rear and to the sides, the forces are only 0.5 g (50% of the weight of the load). For this reason, the load should be secured as s tight fit to the front, i.e. loaded directly against the end wall or by means of bracing. If this is not possible, for instance because there is no end wall, these greater horizontal forces in the direction of travel must be taken into account when dimensioning the lashings.

You will find a detailed description and step-by-step instructions of the correct way of directly securing construction equipment using diagonal lashings in the article "Diagonalzurren leicht gemacht – mit der Methode Backrezept" (German only) in the TIS.