A narrow escape … or "pick-up sticks" for adults 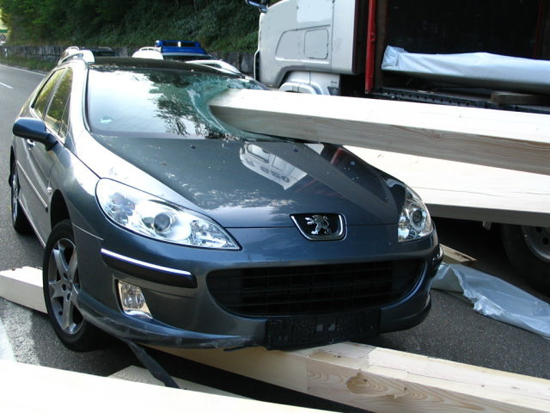 
An articulated truck drove round a right-hand bend. In this bend, the vehicle lost part of its load. An oncoming car was not able to take avoiding action and collided with the load. The load was made up of laminated trusses. One truss smashed through the windshield and penetrated the interior of the vehicle.

The driver of the car was extremely lucky! When we asked her, she told us that the road she was driving on was an uneven road with poor visibility. Figure 5 shows that the articulated truck was coming towards her from the bend. When it came into sight, the wooden beams fell from the loading area in slow motion and slowly slipped onto the road towards her. It is thanks to the drivers quick grasp of the situation and rapid reactions that this lost load did not turn into a fatal accident. She ducked to the right onto the passenger seat while her car rode up a little on one of the beams.

The "only" injury she sustained was a slight injury to her left hand. It doesn’t take any imagination to envisage what would have happened if she had not been able to react so quickly. Figures 1, 2 and 3 clearly show that the laminated truss penetrated the windshield exactly at head height and exactly above the driver’s seat. 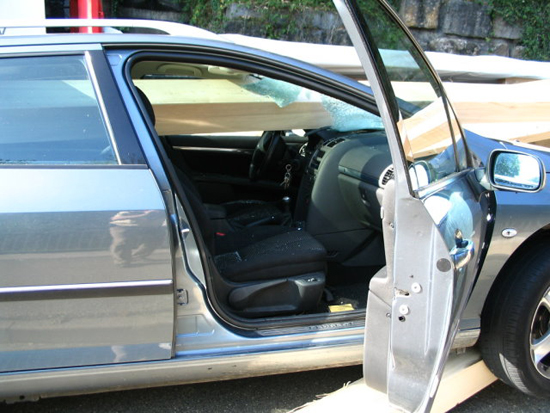 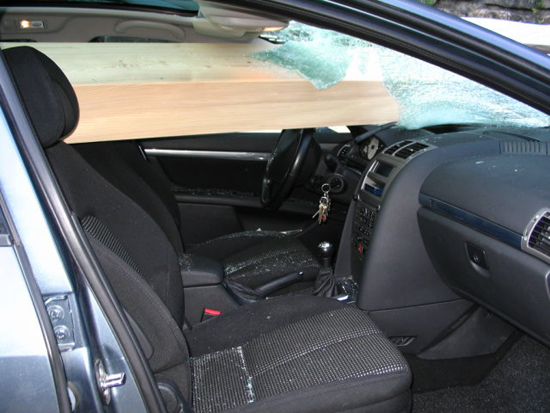 
So what led to this dangerous event?

On top of this first layer were three further packages of trusses, that were also film-wrapped. In this case, the friction pairing was film on film. The film was very smooth, so that it can be assumed that the coefficient of friction µ was a maximum of 0.2. 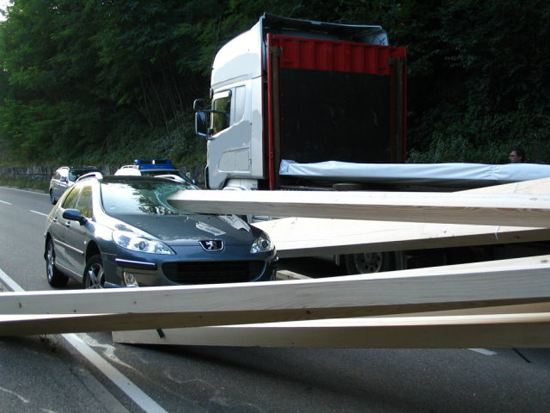 
According to those involved, the load was "secured" using tie-down lashings. It is not quite clear whether two or three lashing belts were used. The lashing belts had a lashing capacity of 2500 daN and the labels on the long-lever ratchet tensioners used showed an STF of 500 daN. The load was nowhere loaded as a tight fit (see figure 10).

The total weight of the laminated trusses was around 3,000 kg. 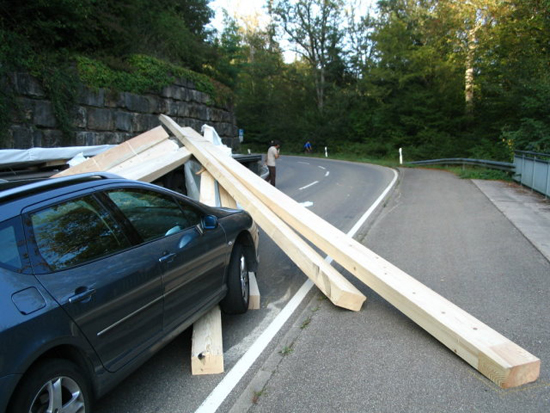 
What was the required securing force?

To adequately secure the load, the following minimum securing forces are needed:


Because the load was nowhere loaded as a tight fit, all the securing force must be achieved by frictional forces and the tie-down lashings. 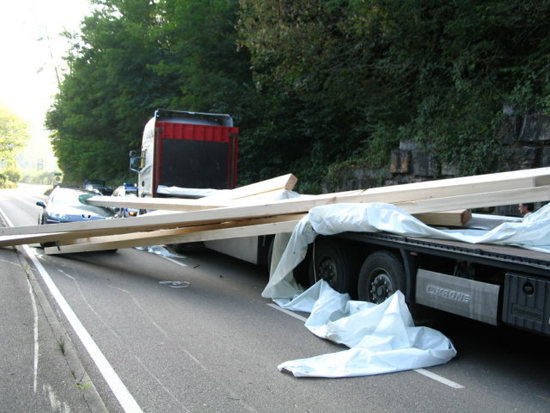 
What securing force was present?

The coefficient of friction µ was restricted to 0.2.

This means that 0.2 times the weight of the load is secured by friction. In this case, that equates to 600 daN. If three lashing belts were used, the following calculation applies:

This calculation assumes that the load securing equipment was optimally pre-tensioned and was tightened during transportation. However, this columnist’s extensive experience from daily vehicle inspection operations suggests that neither of these assumptions are reliable. 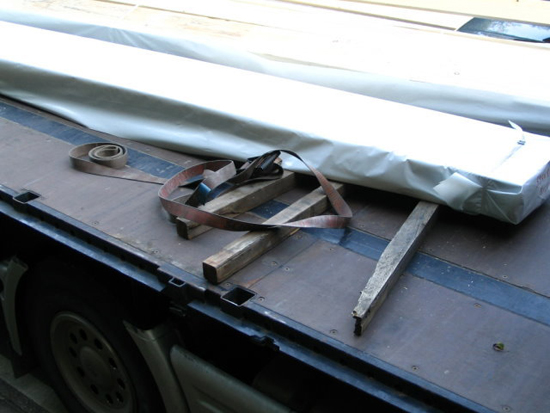 
It should therefore come as no surprise that this load broke free. The poor road was sufficient to cause the laminated trusses to slip from the loading area as a result of the constant vertical jolts.

It is possible that the driver braked slightly just beforehand, so that squared lumber placed on end tipped and the lashing belts therefore immediately lost their pre-tensioning force. If, for reasons unknown to us, it is necessary for loads like this to be transported on edge, then steps must be taken to ensure that they cannot tip over. If just one beam tips under the belts, the belts lose their pre-tensioning force and the load is resting unsecured on the loading area. 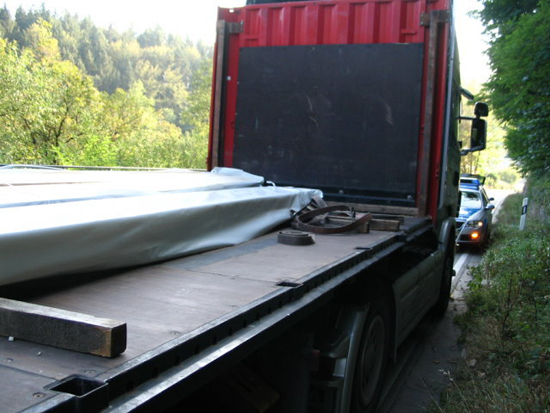 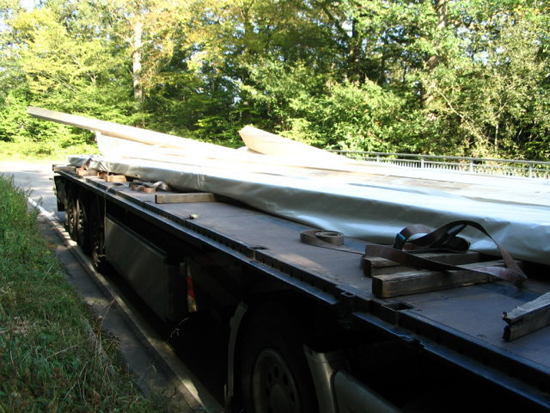 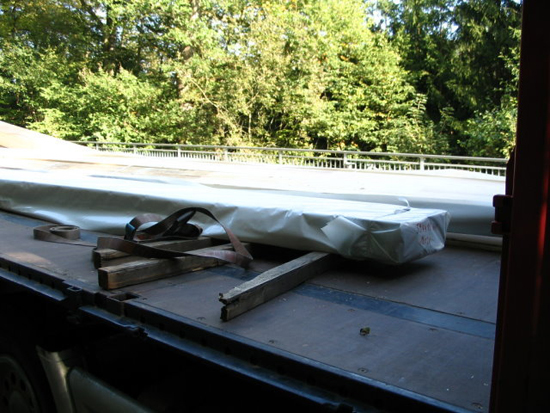 
The square beams were fanned across the loading area after the event. They either slipped, or they could even have rolled, because, as has frequently been said loud and clear in this column, squared beams with square cross-sections have a tendency to roll. 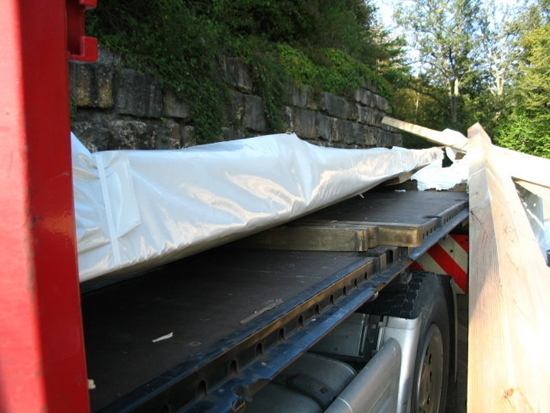 
How can this load be secured simply, quickly and adequately to prevent an event such as this?

If you observe all these "commandments", this load is simple to secure.

Friction-enhancing mats must be used. With a coefficient of friction µ of 0.5 these are sufficient to secure the load if it is loaded as a tight fit to the front. The minimum securing requirements then demand that two tie-down lashings are used to ensure that the high frictional forces are maintained throughout the journey.

It only remains for us to wish the driver that she never encounters a situation like this again. The driver of the articulated truck will certainly remember this accident every time he loads up his truck. Our wish for him is that his loads never again represent a hazard for road safety.