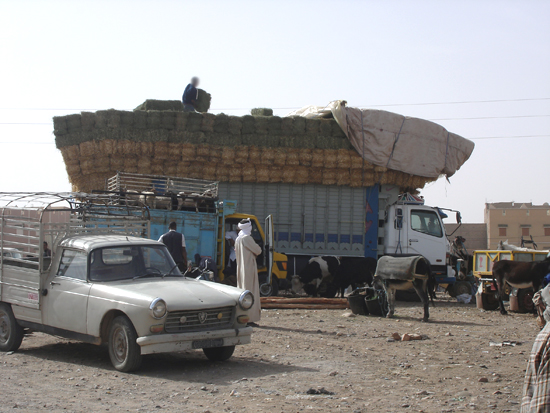 
Across the globe, vehicle manufacturers are constantly striving to build their vehicles in such a way that another cubic centimeter of load can be squeezed on. This type of vehicle is then known by such fantasy names as "Mega-Truck", "Gigaliner", "150 cubic meters on 26 wheels" and so on. The prevailing opinion is that the expertise of engineers from the highly developed industrial nations is needed to construct such high-tech products.

Like so much else, this is a misconception. Thousands of years ago in North Africa, civilizations were able to calculate the diameter of the earth to within a few centimeters, build the pyramids and document scientific knowledge on innumerable scrolls of papyrus at a time when the glaciers were creeping northwards in the North of Europe. And it is in this North African cradle of culture and science that the super-truck has been known for time immemorial. After all, the knowledge about the pyramids, how they were built and the special way in which they work is deeply rooted not only in society, but also in the transport industry. With a skilled hand, and sophisticated load securing techniques, hay and straw bales are loaded in such a fashion that many a haulage contractor from Northern and Central Europe would turn green with envy at the 200 % utilization of the loading space available. 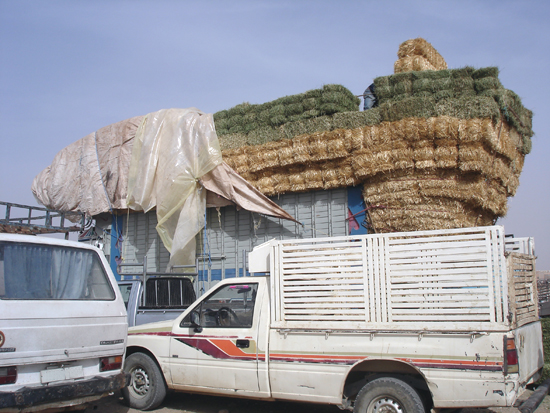 
And the packaging and the formation of load units leave nothing to be desired. No obtrusive pallets have been loaded, and the units do not protrude or fall away. Far from it, the units of the load really do fit tightly against, on top of and behind each other. The clever use of direct lashings on the top layer, strengthened with cross-members, seems so sophisticated that even this experienced load-securing columnist is awestruck.

Even measures to protect the load and prevent loss have been put in place, with the entire load being covered by tarpaulins, again cleverly employing direct lashings and loop lashings. And this can hardly be because heavy rainfall is expected, but rather because the headwind could cause a significant amount of the load to be lost from the load units over time, and this would mean a reduced quantity on delivery, which is to be avoided at all costs. It must be said, however, that at the front, the aerodynamics of the load thus produced have been sacrificed somewhat in favor of maximum utilization of space. On the other hand, the way that the load protrudes over the driver’s cab does protect the cab from the intense sunlight. 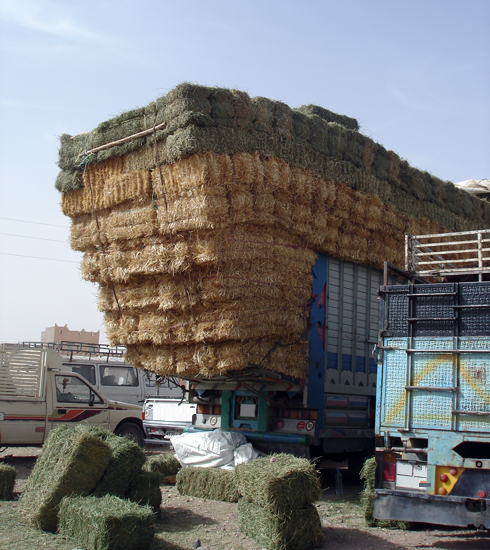 
It goes without saying that the headlights, brake lights and indicators, and even the number plate are clearly visible. And four-legged cleaning staff have been assigned to the task of cleaning up any residue from the load. Even during loading, they are fully occupied in carefully removing any trace of the load from the loading bay.

Sometimes it helps to look beyond the end of one’s nose. Sometimes it is worth taking off the blinkers and asking whether, despite our own convictions, we really are on the right path.

And if you have actually read as far as this, the load-securing columnists wish you a relaxing Christmas, a peaceful holiday, a critical eye for what really matters and perhaps just a pinch of irony to help you survive the coming year in the best of health. If you have snow, leave the anti-slip mats at home and get on your toboggan! As we say in Germany, "Have a good slide into 2010".

And just in case anyone is thinking that they might try to have this loading method certified by some institution, just remember that we are all entitled to have a little fun at this time of year!