Holding back the tide


A truck with a with a gross vehicle weight of 7.49 tonnes is traveling along a freeway in the Ruhr. It belongs to a gardening company on their way to water gardens during the warm summer of 2009. It is loaded up with a water tank filled with about 3000 liters of water.

In front of this water tank is a metal can (see Figure 1). This contains diesel fuel to drive a pump that is also on the rear right of the loading area next to the tank (see Figure 2).

To prevent the tank from rolling back and forwards, squared lumber is secured to the base of the tank with angle brackets. These angle brackets have sizeable lugs that are attached to all four corners of the tank.

All this is standing on a smooth steel loading area.

And how was the load secured? Looking at the pictures, one is tempted to reply "not at all!" 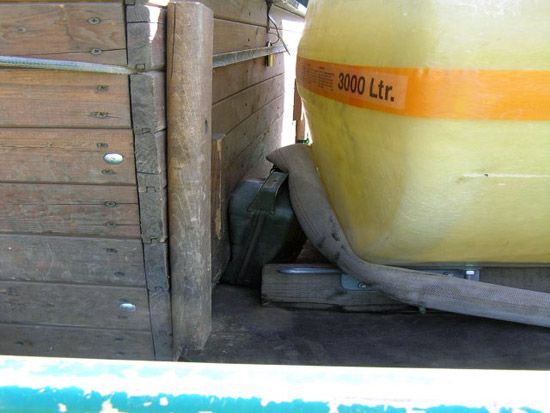 
Sadly, this would not be far from the truth. In Figure 1, you can see something resembling a lifting sling that may have been used as a head loop. But it is just another part of the load, a hose. 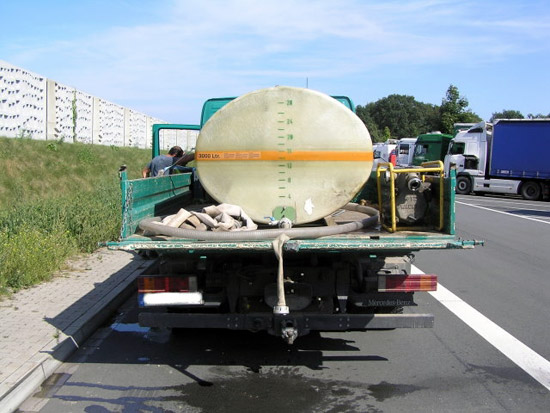 
If we look at the back of the truck, we can see an unsecured pump and some more hoses at the right rear. Only when we take a close look from the side (Figure 3) can we see a lashing belt.
This was passed over the middle of the tank and tensioned or pre-tensioned over the side gates. It was attached to the subframe of the loading bed. We assume that the driver used this belt to appease his conscience rather than to secure the load. 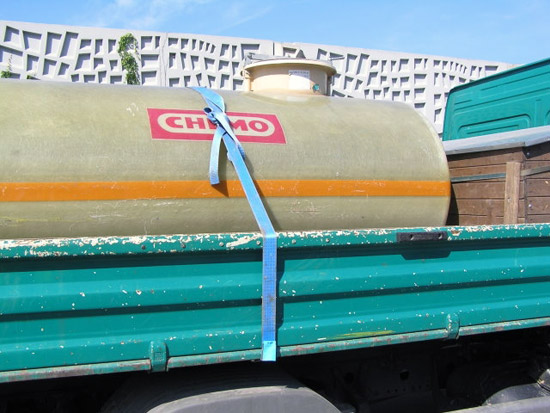 
Because this is the only load securing equipment used, we shall perform the calculation to show how ineffectual it is:

It is a belt with an LC of 2500 daN.
The assumed coefficient of friction µ for the load (squared lumber / steel loading area) is no more than 0.2.
The pre-tensioning force (STF on the belt label: 350 daN) is in this case 350 x 1.5 = 525 daN under ideal conditions.
The lashing belt undoubtedly slides over the plastic tank very well, but is attached at a very unfavorable angle because it has been passed over the side gates. The angle (Figure 8) is around 50 ° or probably less.

This means that the actual maximum securing force available is around 80 daN. And this is intended to secure a load of some three tonnes. Attentive readers will already have realized that this didn’t work just by glancing at Figure 1.

In response to the situation on the road, the driver had to brake more heavily than usual. There was an audible thump from the loading area. But the driver didn’t take any notice. Only after he had been stopped by the police, who wished to inspect the clearly inadequate load securing, did he discover that the water tank had slipped forwards and had crushed the fuel can that was standing there. That was the end of the journey for the time being. 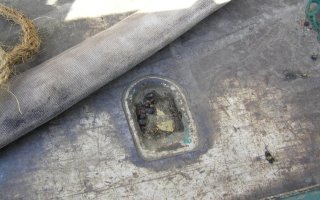 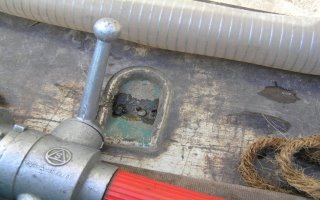 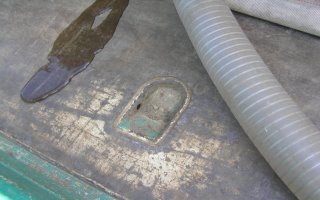 
The vehicle was not exactly in the best condition. As can be seen in Figures 4, 5 and 6, a number of lashing points were missing completely. This casts doubts on the suitability of the vehicle. If the lashing points were in order, they would have needed to be able to withstand 800 daN as laid down in DIN EN 12640. 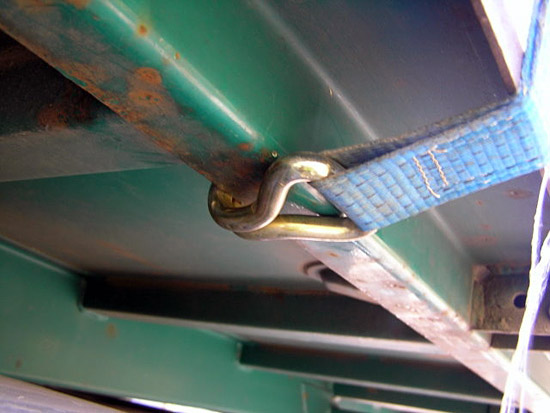 
The extent to which the subframe is suitable for attaching load securing equipment is certainly a matter for debate. One thing that is certain is that lashing equipment with claw hooks is available that would be better suited to such situations. 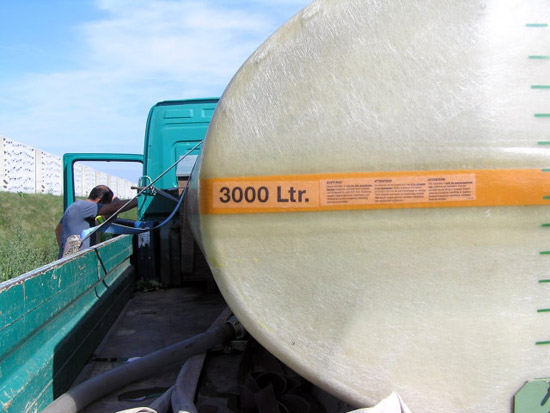 
So how can this load be secured safely?


The water tank is placed on these mats.


Finally, wooden blocks are placed between the toolbox and the water tank, two tie-down lashings are attached and the pump is secured at the front.