As far as load securing is concerned, steel is always a challenging load. Firstly, it is always very heavy, secondly, steel products often have razor-sharp edges and thirdly, the shape of such products is generally round or pointed.

Coils are round and have sharp edges. If they are not packaged, as in this example, it is reasonable to assume that they have been treated with anti-corrosion oil. It would appear that this is cold-rolled sheet that is more susceptible to rust film etc. as a result of the grade of the steel. 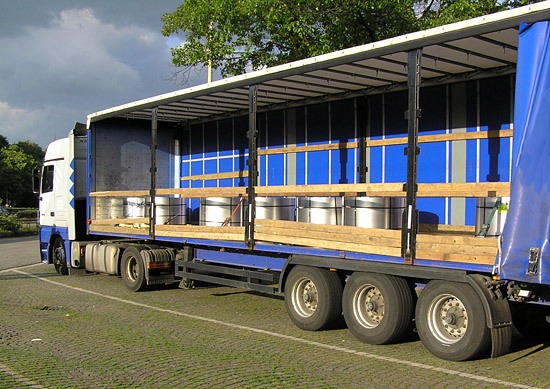 
So what did the conscientious officials find on this vehicle? 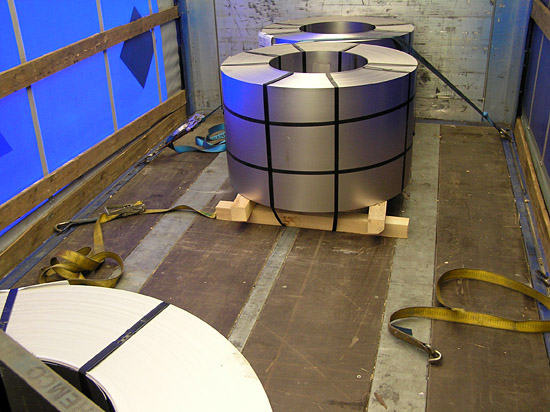 The load had slipped forwards, presumably as a result of a braking maneuver. Figure 2 clearly shows skid marks. On this evidence, the load has slipped some 400 through 500 mm in the direction of travel. This can be seen clearly on the coil that was loaded directly behind the end wall. In this case, the coil has slipped out from under the belt. The belt itself is just hanging on the outer windings of the coil (see the arrow in Figure 3): 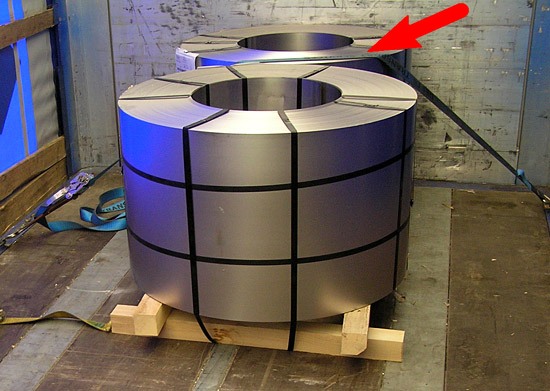 The behavior of some of the coils on this vehicle has been exemplary. Having been loaded on a curtainsider and secured with a single paltry tie-down lashing with no FE material or edge protectors in sight, they slipped the first time the vehicle braked. This caused the belts, that were exposed to the sharp steel edges with no protection whatsoever, to be simply sliced through. Figures 4 and 5 show the evidence of the hard but unfair battle between belt and coil: 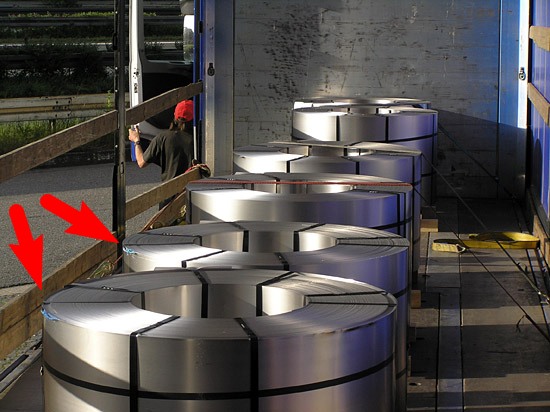 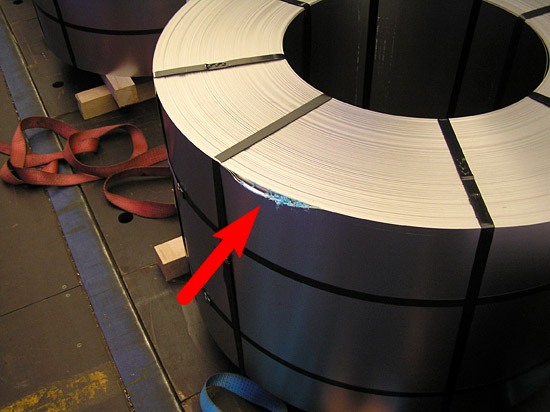 In fact, it is not a fundamentally bad idea to secure coils with a weight of 2.8 tonnes using tie-down lashings. When securing nine coils, all that is actually needed is 18 belts, 36 edge protectors, a total of around 8,400 daN pre-tensioning force and plenty of friction-enhancing material (with a coefficient of friction µ of at least 0.6). The FE material must be thick enough to be able to completely isolate the skids from the loading area that may be uneven. This means that no part of the skid is allowed to be in contact with the loading area. Only then can you confidently assume a coefficient of friction as specified or certified by the manufacturer. This experienced load-securing columnist would prefer a mat at least 10 mm thick and would tend to recommend a vulcanized, heavy-duty mat rather than lighter duty equipment.

So much for the theory.

Trials have regularly shown that the laws of physics make no exception for coils. Here, we are thinking of friction, that has to propagate uniformly from the loading area to the coil. It is regularly observed that the coils slip on the skids, causing them to slide out from under the load securing equipment, which means that they are then more or less unsecured and can do what they like on the loading area.

Our advice is therefore to combine tie-down lashings with direct lashings in order to eliminate any slip. This means that the load blocks (groups of load units, each of which comprises a skid and a coil) that have been formed should additionally be secured with a loop lashing acting against the direction of travel (see the diagram in Figure 6). The prerequisite for this approach is that it must be possible to load the coils as an absolute tight fit. If this is not possible, the securing method should be changed to direct lashing.

Figure 6
(Only those loop lashings acting against the direction of travel are shown.)

If a coil or load block is to be loaded against the end wall, it should be noted that this constitutes a point load on the end wall. In this event, this point load must be distributed across large areas of the end wall using lateral beams or similar means.

Special vehicles are available fitted with coil troughs or coil skids. Vehicles such as this are more suitable for transporting coils and should therefore be preferred. Figure 7 shows coils being transported in coil troughs of this sort. 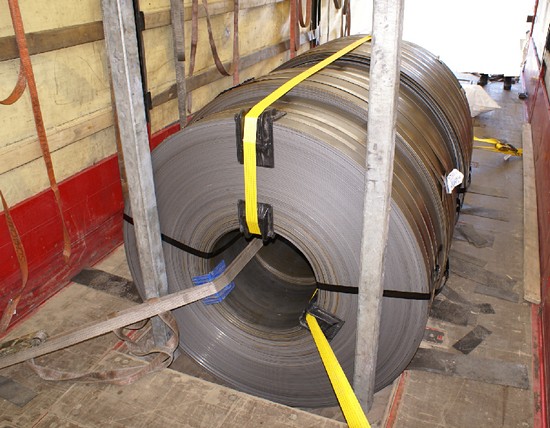