A bombshell in concrete, take two


This time the police were able to take a load that was at high risk of being shed off the road. 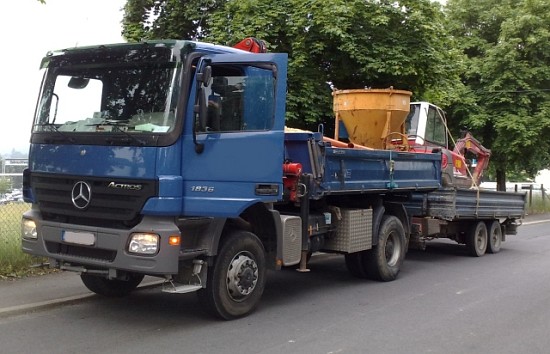 Alongside sand, boards and plastic pipes, a concrete bucket was also loaded on the truck. Although the boards and the pipes were at least secured to a minimal extent by means of a lashing belt passed over the side panels (Figure 2, blue), the orange "concrete bomb" was simply standing on the loading area totally unsecured.

Figure 2 clearly shows that more than two thirds of the concrete bomb extended above the height of the side panels. You can look in vain for a tight fit or for any belts. Simply pulling away could be enough to cause the "bomb" to drop off the back of the loading area.

On the right of Figure 2, you can also see an excavator that is ready for scrapping. 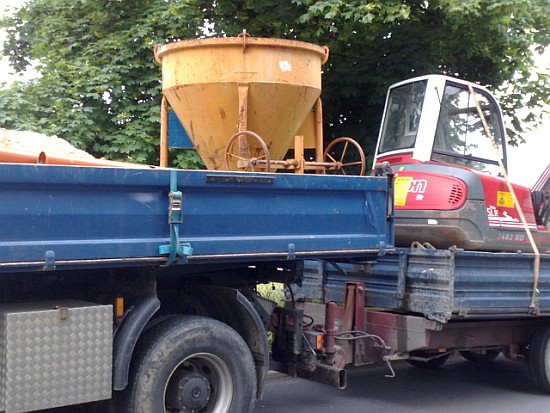 Why ready for scrapping?

Because it is at any time ready to join the traffic on the roads, for instance if it should become necessary to brake sharply and take avoiding action at the same time. It is simply "lashed down" with a lashing belt. And the belt itself is frayed and ready to be scrapped.

But why not, exactly?

"After all, I’m only traveling a couple of miles from site A to site B. Not much is likely to happen on such a short journey."

Figure 3 shows the loose drainage pipes. At the front, they are resting on sand. The coefficient of friction between smooth plastic and sand is so slight that these pipes are set to fall off at any time. 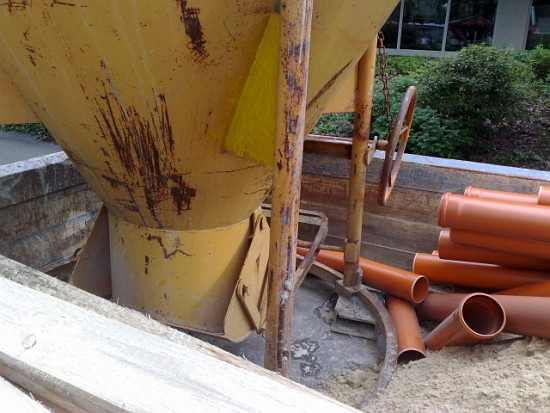 What damage can these pipes do in traffic?

You only have to imagine what would happen if you suddenly encountered an obstacle such as this on a scooter, a bicycle or a motorcycle.

Figure 4 shows a number of boards stacked above the level of the side panels waiting to be unloaded. Let’s hope that’s done by human hands at the building site, and not by the iron hand of physics on the way there. 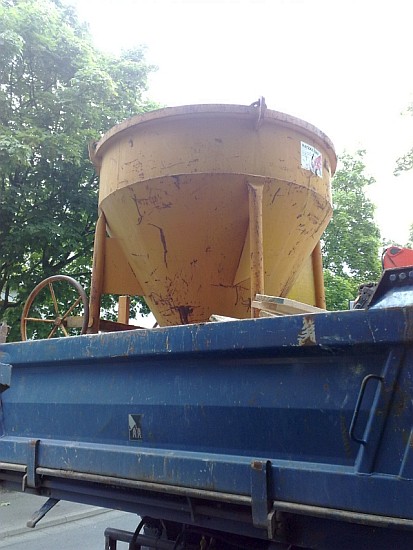 
Crucial point! – It always needs to be remembered:

The load always needs to be secured, even for short trips. The laws of physics apply everywhere. It’s quite possible to drive from the south of Spain to the north of Germany without ever encountering a driving situation that could cause the load to slip or be lost.

Equally, however, it is possible for a cyclist to cause you to brake unexpectedly when you are driving off from the site. And the laws of physics are ready and waiting to launch the "concrete bomb" into the traffic.

So how can this load be secured properly?

It really isn’t that difficult and doesn’t take up much time.

Firstly, the concrete bomb is not transported upright. Instead, it is laid on the loading area on its side, preferably up against the end wall. Lashing points are provided on the end wall. This bomb can then be secured with simple loop lashings.

The boards and plastic pipes are laid on the loading area in such a way that they are below the top of the side panels.

Now a suitable net or tarpaulin is placed over them and attached to the superstructure and the load on the truck is secured.

The excavator is standing on the trailer. This can only be secured sensibly if strong lashing points are provided on the loading area.

Lashing points should also be provided on the excavator. If this is not the case, four loop lashings should be passed round the turntable. This secures the excavator in all directions.

If, however, there are no lashing points on the loading area, the vehicle is not suitable for transportation.


This drawing (Figure 5) represents a trailer on which an excavator has been loaded. If there are no lashing points on the excavator, it can be secured as illustrated in the figure. Four lashing belts are required, each securing the load in one direction.

The weights involved have to be taken into account. This method of securing reaches its limits at higher weights.