Load securing and the course of an accident
or: All you have to do is get it right and it will work


Our loyal readers needn' t furrow their brows or even think that this column has lost its style. Far from it! We are, of course, referring to load securing that was so good that it even managed to survive this accident.

A truck loaded with rolls of paper left the carriageway and made contact with no less than three trees to the right. 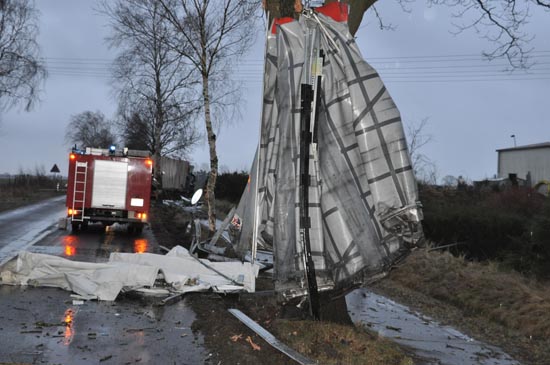 
Once again, the load securing and the accident are what we want to discuss this month. Any load securing measures must be able to withstand the loads that arise under normal traffic conditions. These are by and large reflected in the VDI guidelines (state of the art). We say "by and large", because technology has today advanced to such an extent that equipment such as driver assist systems means that braking acceleration forces of 0.75 g are regularly achieved with fully loaded vehicles. What safety margin does that leave for the cumulative effects of a braking and evasive maneuver?

What is an incident? For the purposes of our analysis, we can simplify the definition. 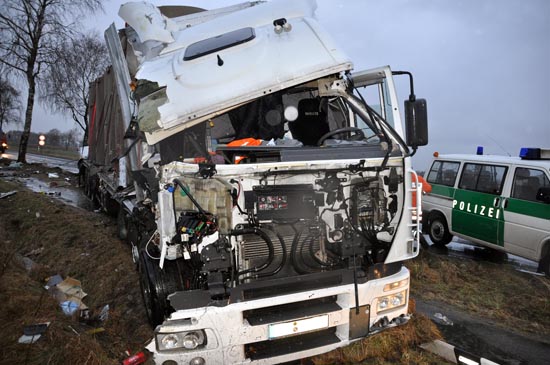 The A and B pillars have been severed as a result of contact with the trees. The acceleration forces for the load must have been considerable (Figure 2). 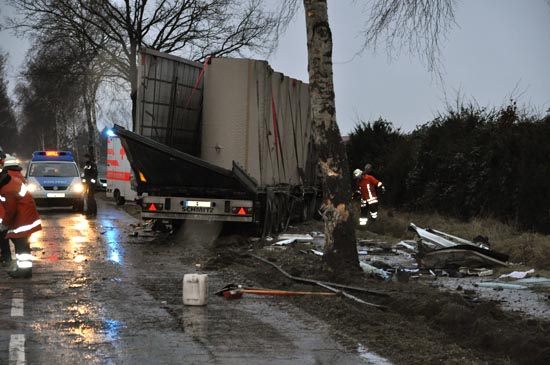 The third tree was struck primarily by the loading area (Figure 3).


In the case in hand, the vehicle left the road (for whatever reason). It made contact with a tree, which generated considerable acceleration forces. These acceleration forces also acted on the loading area. Because we have no records of the securing methods used and how the cargo was loaded, the descriptions below are purely assumptions.

We assume that the rolls of paper were standing on friction-enhancing mats and, as can be seen in the pictures, were not loaded as a tight fit against the end wall. The number of belts makes it a fair assumption that each roll was lashed down with two belts crosswise. Some of the belts were torn off on contact with the trees, but at the moment of greatest acceleration, i.e. when the driver' s cab made contact with the tree, they were still able to help secure the load and to fulfill their securing function up to that point.

It is probable that the rolls slipped and tipped at the same time. The acceleration forces caused the rolls to tip into the "elastic" belts. These were stretched and then pulled the rolls back. If the belts were stretched to something approaching breaking point, the load was on the brink of breaking free and this incident could have become a load securing accident. Because there are no records of whether the belts were torn off by the accident, it is also conceivable that the first belts had also failed.

Good fortune was had by all! 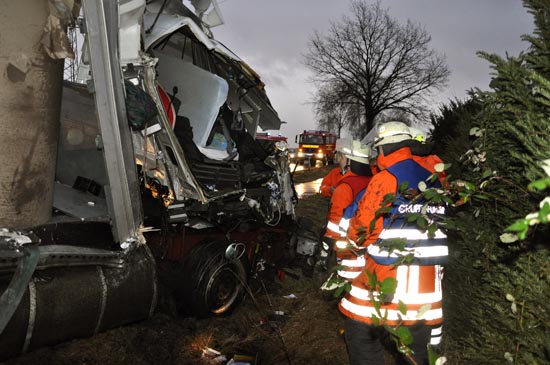 The front right-hand side of the loading area is severely deformed, indicating the amount of energy set free here (Figure 4).


It is almost certain that the load shifted on the loading area (incident). In doing so, it took the load securing tackle with it and at least partially tensioned it still further. It is possible that this tension considerably exceeded the maximum permissible tension. In this case, the load securing material became overstretched and the turnbuckles may have been bent. After an incident such as this, they are undoubtedly ready for scrapping, because they have been overloaded, but they were able to prevent the load from "shooting" forwards unhindered, which would have put the driver at risk of his life.

So good load securing does not merely avoid incidents; it continues to mitigate damage well into the course of an accident.