No need to be upset


One fine summer day, a farmer wanted to transport 24 concrete slabs that were ideally suited for constructing temporary storage, silos, paths, access roads etc. And as is so often the case, these concrete slabs happened to be just where they were not needed, so it was necessary to organize a suitable trailer and vehicle, a fork-lift truck and so on to take them where they were required. No sooner said than done! A vehicle was available in the form of a tractor and a good friend provided the lowloader. A magnificent, freshly painted piece of equipment! What could possibly go wrong? (Figure 1). 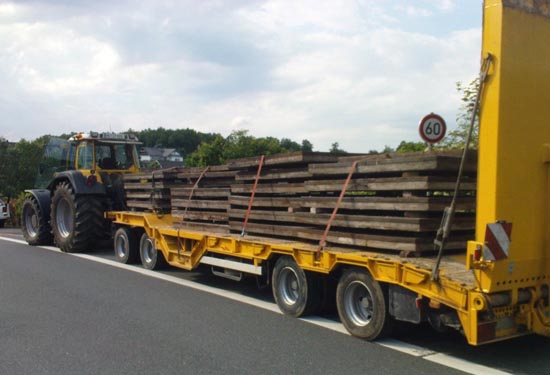 
Looking at the whole of the completed load from the side brings a smile to the face of any expert, because clearly great pains were taken to distribute the load favorably. Even though the writer is unaware of the load distribution plan, the distribution we see gives a very professional impression. And some thought had been given to the loading as well, with a small amount of space being left between the slabs. This allows the fork-lift truck or possibly a crane to unload the slabs one by one quite easily at their intended destination. And thought was even given to securing the load. Each stack was secured with a belt (Figure 2). What a pleasant surprise! 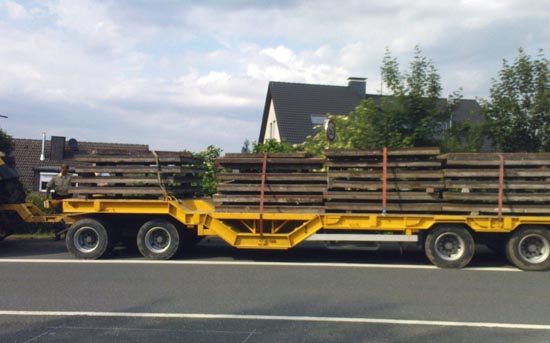 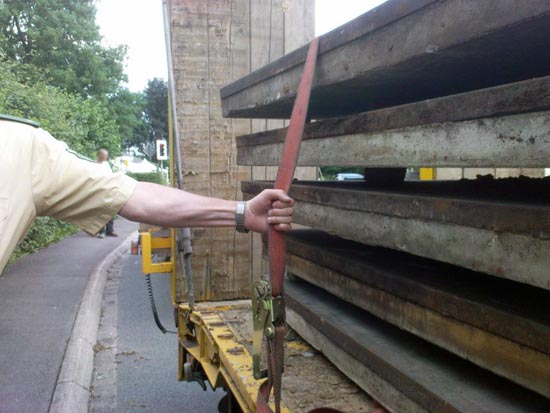 
And yet, the title we have chosen this month means that our readers may suspect that the person responsible for this transport is in for a rough time. And so it came to pass. The Police came along and checked the load and the way it was secured with their trained eyes. Figure 3 shows the first thing the officer did, and lo and behold, all the pre-tensioning force from the tie-down lashing used here had completely disappeared.

And when the officers came a little closer and cast their eyes between the slabs, their expressions changed from merely disappointed to horrified (Figure 4). Could it be possible that the person responsible for putting these slabs on the road had quite seriously placed bricks between the individual concrete slabs rather than sandwich elements incorporating friction-enhancing mats? Not only that, the bricks were not even regular bricks; some of them were just fragments. Fragments and other debris from these bricks, possibly produced during loading, are abundantly scattered over the concrete slabs and, as we know, have an extremely negative impact on the coefficient of friction. 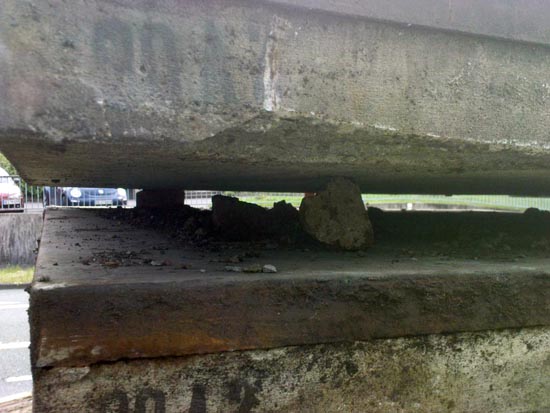 
Figure 5 speaks volumes: Whole bricks, half bricks, fragments and large quantities of gravel, sand and rubble can be seen on the textured steel loading area. It sends shivers down the spine of even the most hard-baked load-securing columnist. 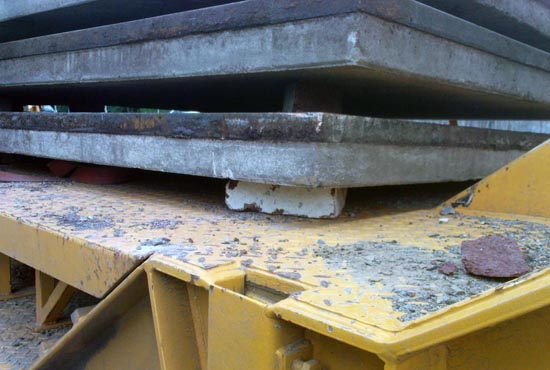 
Figure 6 shows that not all of the loading area is made from textured steel sheet, but that wooden elements have also been incorporated. On one of these wooden elements, a fragment of about a half a brick has been placed on edge and, to prevent it from becoming lonely, a second fragment has been placed next to it with no rhyme or reason and, above all, with no function whatsoever. Perhaps it was simply placed there so that the brick that was already there bearing such a heavy load would not feel so alone. Then again, perhaps the person who used these spacers was taking a wise precaution in placing a second spacer there just in case the first one collapsed under the load. 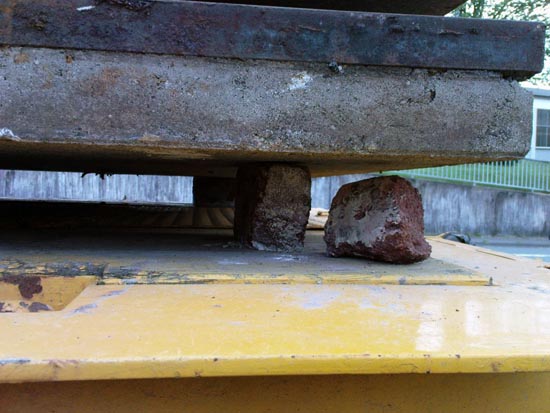 
Figure 7 shows another variant of these gregarious bricks. In this case, the brick has been placed on its side and has also acquired a sizeable fragment as a traveling companion. The loader must have read up thoroughly on the theory of load securing, because they quite deliberately placed the bricks only on the lumber because this has better friction properties. Anyone so unkind as to think the loader only chose to place the bricks on the wood in order to avoid scratching the new paintwork is surely only being mischievous. On the left of Figure 7, you can clearly see a belt hanging down loosely. The reason is simple: Whenever a brick partially crumbled under the load, the pre-tensioning forces disappeared from the belts as if by magic. 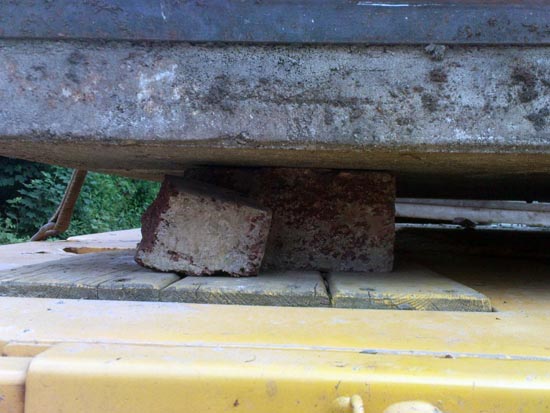 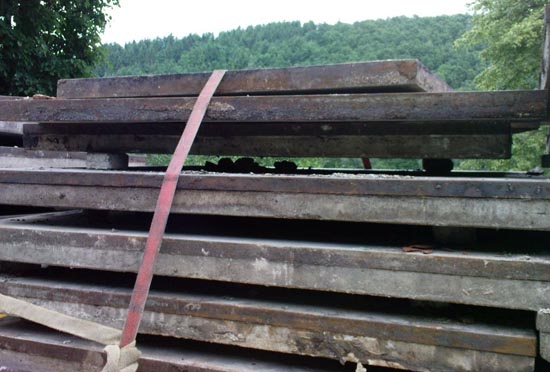 
But the tale of woe does not end with the fact that the spacers were sadly just made up of sociable bricks. No, Figure 8 shows how the tie-down lashings, that were pretty ineffective anyway, at least with this load, became quite farcical. They passed over several sharp edges and, particularly in the upper area around the top three slabs shown in the picture, have virtually no effect, because they passed over several corners. And here we can see a few more sociable fragments of bricks which are liable to leave their friends during the journey over fields and meadows and drop on to the road to make acquaintance with an oncoming windshield.

So what does this photo of the month tell us?

Familiarity with load securing has not yet penetrated to all levels of our society. Here, somebody is the proud owner of an extremely large tractor which is perfectly capable of pulling loads such as this and undoubtedly achieves speeds of between 50 and 70 kilometers per hour on the highways. And the lowloader was probably in principle perfectly suitable for carrying such heavy loads. The problem is that the person that used this bombastic combination of tractor and trailer had just quickly arranged to move a few concrete slabs. They did not spare a thought that with these concrete slabs they were putting a load on the roads that represented a potentially fatal hazard for all road users in the immediate vicinity of the vehicle. They were carrying this load with a clear conscience and, at least to begin with, were extremely upset that the policeman who carried out the inspection simply refused to let them continue, saying that that wasn’t the way to do things.

This time, we don’t want to use these pictures to explain how to transport loads such as these correctly. What we do want to do, however, is to make people think how to raise awareness of load securing requirements among those who work with such large machines on a daily basis. Even without a great deal of thought, it is clear that there is more to it than just an awareness that loads need to be secured in such a way that they do not drop off the loading area and that chains must not make a noise. Beyond this, those who work with machines such as these – trucks, transporters, etc. – must learn that friction behaves proportionally. They must learn that no load, no matter whether it is bales of hay or concrete slabs, is able to double-guess what it should do in the event of braking or evasive maneuvers. It is necessary for everybody to acquire a fundamental knowledge to prevent them from putting loads such as this on the roads, or at least to prevent them from doing so with a clear conscience. And then there would be no need to be upset if they are stopped by a policeman and required to re-load a catastrophic load such as this.

We can only say, for goodness‘ sake learn something!