Pipes on the move 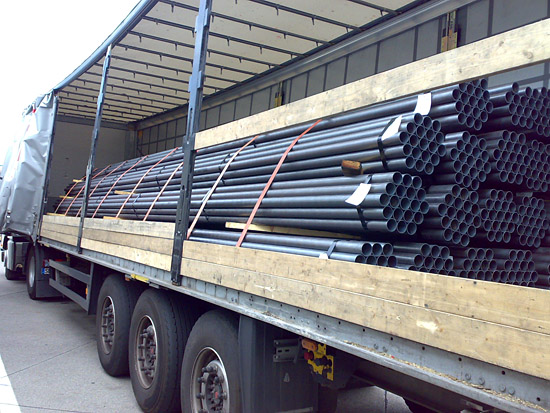 
This load is gradually leaning to the right! Although it initially appears harmless, this leaning is the final step leading up to a catastrophe. 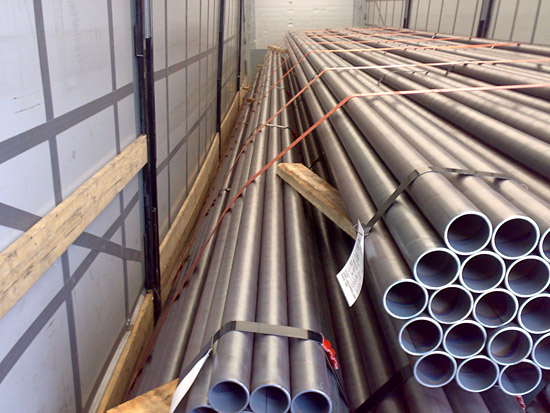 
Weak intermediate layers. The "list" to port is clearly visible.


The attack
At first sight, interested readers may well ask what we have to complain about with this vehicle. It is loaded with 20 tonnes of bundles of pipes and secured with no less than eight tie-down lashings. The vehicle had not been on the road for long. Its destination was some 1,000 km away. But the vehicle had neither been stopped by the police nor had it been involved in an accident. Instead, the driver had noticed that his load of pipes had shifted considerably and was leaning on the stanchions on the right of the vehicle after he had driven through an S-bend on the approach to a truck stop at around 20 km/h.

The entire superstructure of the vehicle was about to give way and release the load. Looking at the state of the stacked bundles of pipes gives an idea of what the right of the vehicle looked like, but we have no picture.

It is always the same old story: Tie-down lashings to prevent loads from taking off upwards. Add to that inadequate interlayer dunnage and the failure to load the pipes as a tight fit to the front. But this load could easily have been stabilized using strong board-shaped interlayer dunnage. In addition, we would recommend securing at least every second layer to the side with appropriate loop lashings. FE mats above and below the dunnage would, as always, be valuable, but, because the load is made up of bundles of pipes that are more nearly circular than square or rectangular, we would prefer to see a loop lashing too many rather than one too few. Securing the load in the direction of travel is a particular problem. The bundles of pipes are strapped with steel straps. It is frequently claimed that the immense pretensioning force provided by this steel strapping is sufficient to hold the bundle together in a longitudinal direction as well. However, because the elasticity of steel strapping is relatively low, the pre-tensioning force it exerts can be significantly reduced even during loading and the pipes can slip forwards out of the bundles. This means that load securing mats, wooden constructions and so on must be used to provide securing to the front and back to keep the individual pipes in the bundles. It's quite simple really.