Such battering rams are familiar both on land and at sea. In the Middle Ages, they were used during extended sieges to persuade the occupants of a citadel to open the gates. At sea, galleys were fitted with rams like this for many centuries to hole the enemy ships at or even slightly below the waterline in order to make it far more difficult for them to take any further part in the battle.

In this particular case, however, the intention was not to construct a medieval battering ram, but rather to solve a contemporary transportation problem. The challenge was to transport a 14 m wooden beam on a 10 m truck with a loading area just 7 m in length. The frightening result of this intellectual exercise can be seen in the picture below: 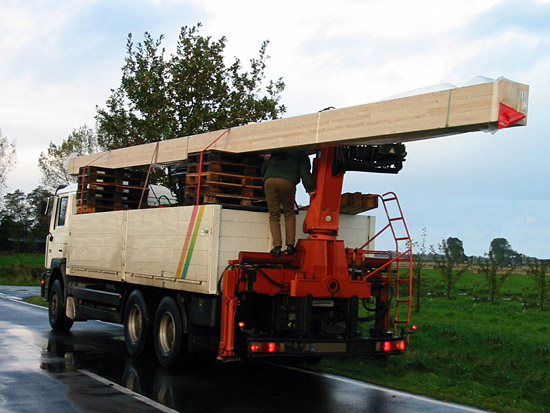 
Two stacks of pallets were used to raise the "loading area" above the cab. Three tie-down lashings that appeared to have remarkably little in the way of pre-tensioning force were used to "secure" the entire construction. Just to add spice to the affair, the wooden beam had to be protected from moisture, so it was wrapped in plastic sheeting, which did little to improve the friction situation. It may well be annoying that it is not possible to transport such a small load with such a large vehicle. But this is not reason enough to endanger oneself and other road users with the risks associated with such mobile battering rams.