Figure 1 shows an articulated truck with a full load of steel pipes. The steel pipes are loaded using the "bilge and cantline" method, i.e. 4 or 5 pipes are placed on the loading area and 3 or 4 pipes are stowed on top of them at an offset. The critical issue here is that the resultant opening angle causes the pipes to exert a lateral force against the stanchions. A simple experiment at your desk illustrates this force. Place two round pencils next to each other and touching each other and then place a third pencil on top of them. The bottom two pencils will roll away to the sides as a result of the spreading force described above. The side stanchions must be able to withstand this lateral force and 0.5x the force exerted by the entire load. 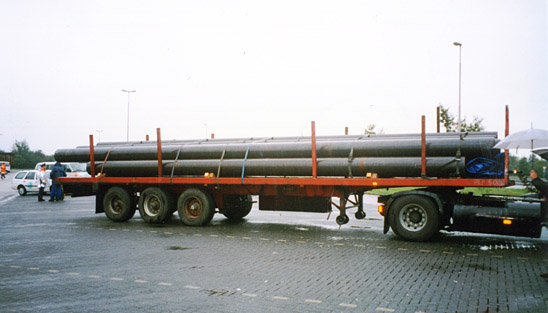 Wooden wedges can also be seen in Figure 1. If these wooden wedges are secured to a base or to the loading area, they can be used for securing the load to the side. If the wedges have been cut correctly, a securing force of 400 daN can be taken for each nail (with the exception of the tension nail) (see drawing). The following should be noted: If the wedges are nailed to a plank or similar base, the weak spot may be the friction between the plank and the loading surface. This only applies if the plank is not firmly connected to the loading area or if no friction-enhancing materials are used between the plank and the loading surface.

The active load securing measures comprise 6 tie-down lashings. As can be seen from Figure 2, long-lever ratchet tensioners have been used, and these can generate a pre-tensioning force of up to 500 x 2 = 1,000 daN on the tensioning side. Even if we generously assume that none of the pre-tensioning force is lost as a result of the friction across the load (K value) and we also ignore the angle of the load securing equipment, the maximum pre-tensioning force is 6,000 daN. With a coefficient of friction μ of between 0.1 and 0.2 (steel on steel, wet), a securing force of a mere 600 or 1,200 daN at the most remains. For a complete load of 24 t of pipes, however, at least 14,400 daN securing force would be required (against forward movement). 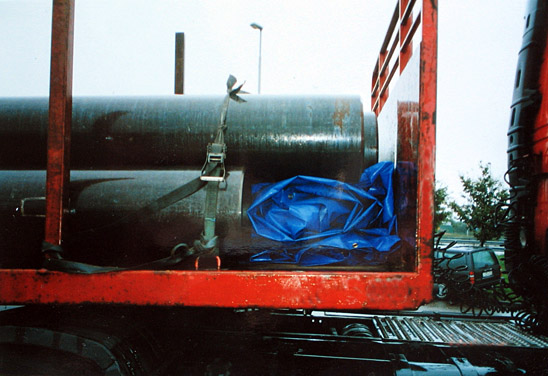 This simple examination shows a gaping deficit in the securing force of at least 13,200 daN. This rule-of-thumb calculation shows how pathetic the attempt at securing the load was. Figure 2 illustrates the quality of the belt material. The belt shown in this picture has already been tied twice on this side of the vehicle alone. This means that this belt can be ignored for any assessment of the load securing. The gap in front of the load is considerable, and the tarpaulin placed in this gap cannot be regarded as forming a tight fit.

Pipes like this are excellent candidates for direct securing using belts or chains. The shipper must be consulted as to whether the chamfer on the end of the pipes allows chains or the hook of the lashing belt to be secured to the pipes. If this is not the case, the ends of the pipes must be padded, with squared lumber, for instance. Direct lashings in the form of loop lashings can then be attached around this padding material. Nowadays, load securing mats made from extremely stable belt and tarpaulin material are manufactured and marketed specifically for securing steel components, pipes and similar items (Figure 3). Securing against rearward movement can also be achieved using similar securing methods. 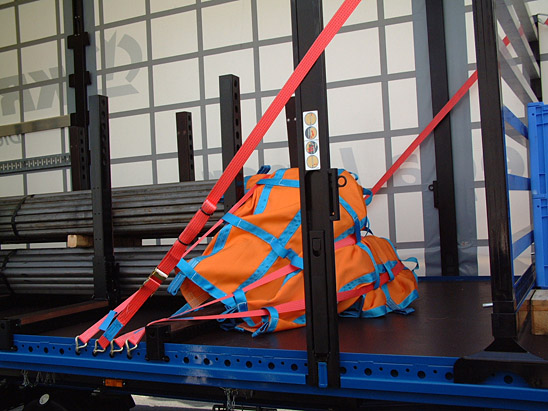 If the stanchions are not sufficiently strong for securing to the side, or if the loading capacity of the stanchions is not known, four loop lashings in each direction of movement can be used to fully secure the load.