The global division of labor is constantly making the world a smaller place and has been responsible for a disproportionate increase in transport activities over several decades now. Goods are produced across the globe and containers are transported around the world just in time on super container ships, a high-tech feat of logistics that governs the pulse of the world's economy.

But if you take a closer look, you could well find yourself asking how anything actually works at all in this logistics system. The expression "stuffing containers" is all too often taken literally. Packaging and the formation of cargo units are often so poorly planned and executed that they sometimes directly provoke damage. This increases the probability of damage several times and in some cases, this probability turns to bitter reality. 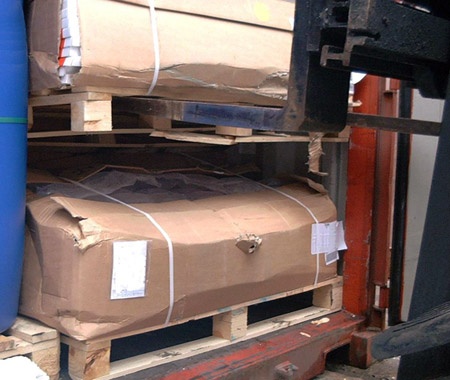 The first figure shows load units made up of sheet-like materials and stacked on a pallet (Figure 1). The cardboard packaging used is not strong enough, strapping has only been applied from side to side and is barely capable of restraining the loose cardboard. No edge protectors or corner protectors have been used and to crown it all, another cargo unit has been stacked on top of this one. The pallet of the second cargo unit has been badly damaged by a fork-lift truck whose driver had only a rudimentary knowledge of cargo handling. The board you can see at the bottom of the pallet is broken in two places and had plenty of opportunity to work its way into the cargo below during the course of a long voyage. And so, the rushed handling of a pallet designed to distribute the pressure caused by the load caused it to become the source of further damage. 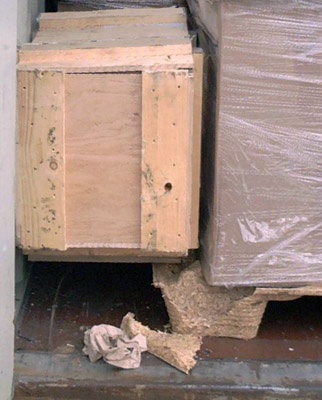 The second figure in this little presentation shows how a small wooden box has also been carelessly stuffed into a container (Figure 2). The only positive aspect of this is that the load next to it is secured as a tight fit, at least for the time being. The bottom half of the picture shows the foot of a pallet, one whose delicate construction means that it needs to be treated particularly gently. The lamentable state of the pallet foot suggests that it has already made acquaintance with our fork-lift driver with the rudimentary training. If they are not handled properly, these moulded chipboard pallet feet can easily disintegrate into sharp shards that can work their way into the cargo below like can openers. But even the apparently stable box is beginning to break up as a result of rough handling. The lid of the box has already become detached. We shall not even bother to comment on the fact that this wooden box was simply "suspended" between the wall of the container and the rest of the load by hand. 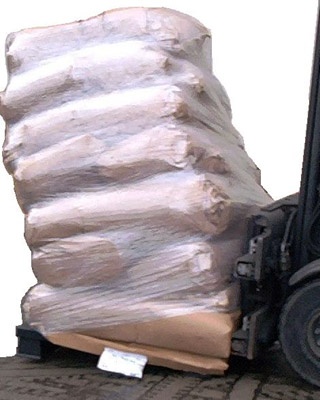 The third figure on our topic of packaging actually has more to do with the formation of a cargo unit (Figure 3). Correct packaging is a fundamental requirement for a cargo unit. In this case, an unstable cargo unit was formed that is not worthy of the name. The pallet is in an appalling state and cannot be used again. The wrap intended to hold the cargo unit together (secure it) while it is being transported with floor conveyors is inadequate. The cargo unit is not in a state fit to be transported. A load securing columnist is bound to ask himself how goods of this type can be sensibly secured on a truck or in a container.

The packaging of goods and the formation of safe cargo units is not a luxury. It is an absolute precondition if the goods are not to suffer damage in transit as a result of the packaging.


You will find additional information on packaging in the Container Handbook (www.containerhandbook.de) and in the Packaging Handbook (www.verpackungshandbuch.de), both published by the GDV.